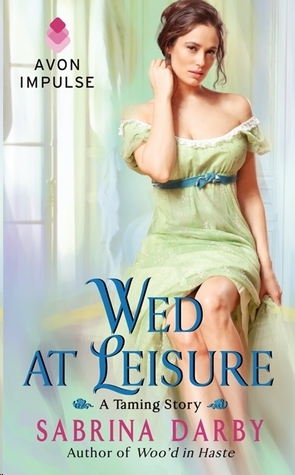 An Excerpt from
Woo’d in Haste

An Excerpt from
Falling for Owen
by Jennifer Ryan

K
ate ran through the thicket, gasping, her face hot with suppressed tears. The governess would chide her for the stains and small abrasions to her dress once she returned to the house. But those monitions were nothing compared to her mother’s continued disdain.

The scent of moist earth and the sound of rushing water meant that she was close, that soon she could let go. Finally, she broke through the cluster of trees and bushes and made it to the water’s edge, where she dropped down to her knees, clutched at clumps of grass with her fists, threw her head back, and wailed.

Kate clamped her mouth shut and looked toward the familiar voice, embarrassment flushing her body. How humiliating.

The Earl of Bonhill sat under a tree, a book open on his lap, his trousers rolled up and his legs dangling into the stream that, a mile off, fed into the river, and that farther upstream offered her father a perfect spot for angling. The same stream that marked the boundary between the Colburns’ ducal seat and the Mansfields’ more modest estate. Here, however, titles hardly mattered. What did matter was that Peter had gotten there first and taken the best spot. And was now witnessing Kate in tears.

She hadn’t even known he was back from Harrow.

She scrambled to her feet, glaring at him, as anger was the only possible refuge from humiliation, and headed back to the thicket.

“You don’t have to run,” he said, the crunch of his footsteps on the fallen leaves growing louder as he came nearer. “I’ll go.”

For some reason that made her more upset and she stopped, whirled around to face him. He was sixteen, she knew. Four years her elder.

“It doesn’t matter if you do. It’s already ruined.” She wouldn’t be able to indulge in tears the same way anymore.

“Then maybe I can help.”

He shrugged. “Why don’t you tell me why you’re crying?”

“I’m—” She shut her mouth. It wasn’t worth arguing. After all, she
had
been crying.

“That’s right. The fearsome Kate Mansfield makes other people cry, but she’d never be caught with such lowering emotions herself.”

“Just because you’re an earl, doesn’t mean you get to be cruel.”

“Someone didn’t do what you want? Didn’t let you have your way?”

Frustration welled up inside her. Why was he saying such things? Of course, it was just what everyone else echoed. Everyone but her mother.

“You don’t know anything about me,” she said hotly, tears once again burning her eyelids.

And for some reason she did.

About her mother, who hated her, who said Kate was ugly because she was so dark, who criticized everything Kate ever did, and little Bianca could do no wrong. About how no one ever paid her attention unless she did something terrible.

“So you do it on purpose, then. All the fits and tantrums we hear about—you do that for attention.”

She flushed with mortification for the hundredth time that hour. She’d never thought about her reputation in the community. At twelve, her world barely existed beyond Hopford Manor. And then there was this suggestion he was making, and she wasn’t certain if it was a good thing or bad. But she knew one thing, she didn’t
need
attention, and his suggestion that she craved it made her seem terribly weak.

“As if I’d care what anyone thinks. Especially not you. Look at you. A spotted maypole!”

He flushed, which made those
spots
redden even more. There weren’t all that many, but anyone would be conscious of having such flawed skin. Kate’s was not. Not that one would know from the many admonishments her mother imparted about good care for one’s complexion.

“You’re a spoiled child, Kate Mansfield,” he pronounced, picking up his book from the ground. “Maybe someday you’ll grow out of it.”

She watched him leave in angry frustration, hands curled into fists. It didn’t matter that he was an earl and heir to a duchy, or that previously she had thought him nice and handsome and had even imagined growing up, falling in love with him, and becoming a duchess. From now on she’d stay as far away from him as possible.

T
he prodigal son. Hah. How many men looked on their sons’ service to their country with pride, while his own father still refused to afford Peter even the slightest modicum of respect.

He took another gulp of the scotch in his flask. It was strong, much stronger than what he normally drank, but he was determined to like it. In any event, the more he imbibed, the better it tasted. There was a lesson in that surely.

He stumbled along the bank of the stream, perilously close to the edge and as he reeled, arms out to balance himself, the thought that he might fall in made him laugh.

Why was that funny? He started laughing more.

Finally he reached the spot under the oak tree that had always been his favorite. Of course, the last time he’d been here he hadn’t yet left for the Continent. He’d been so young.

And that Mansfield girl had been there.

She’d grown up rather well. At church he’d seen her, long dark hair, dark eyes, ignoring everyone, including him. A bit too haughty for her own good, Reggie had said. And his brother should know, since he’d spent more time here in Waterford on Lew in the last five years than Peter had.

Reggie had had a good many things to say about Kate Mansfield. None of them good.

He took another drink and then paused, flask to his mouth, and stared. At a pair of dark brown eyes in a pale face That appeared seemingly from nowhere.

Not nowhere. She clearly had been there before he had arrived. A reversal from the last time they had met this way. She was what? Seventeen now?

Her eyes widened. “What?”

“The last time I saw you here you were.”

But maybe he was, because he couldn’t remember what they were talking about, or why Kate Mansfield was standing in front of him, reaching for his flask.

She plucked it from his grasp and he stared at the air where it used to be before sliding his gaze to her.

She was sniffing at the opening.

“What is this? It smells horrible.”

“They call you a shrew, you know,” Peter confided.

“People say any number of things. Like your father.”

Yes, his father wasn’t particularly private about his opinion of his oldest son. Or his youngest, but Reggie didn’t seem to care.

He reached for the flask, found himself holding her hand. Which was smaller than his, with long, slender fingers, a tiny wrist, a soft palm.

Soft. She was so soft.

“Peter?” Her voice was soft, too, and he pulled her closer.

P
eter Colburn, the Duke of Orland, wasn’t entirely certain how he’d ended up in Brighton, standing on the side of the assembly room at Castle Tavern after having passed an uncomfortable night on the sofa in his friend Trumbull’s already crowded rented rooms. He certainly hadn’t intended to stop in the seaside town before heading home to his family’s country estate. First of all, it was the wrong direction. Second of all, if he had intended such a jaunt, he would have arranged for his own rooms months ago. He hadn’t stayed in such cramped accommodations since his days in the army. In three years, it was possible he’d gotten a bit soft. Or perhaps, he simply had raised his standards.

Nonetheless, here he was, nursing the sort of headache that came from reuniting with old friends, resulting in the need to recapture one’s younger and more inebriated days. After a too-long London Season, in which he’d dutifully accompanied his aunt Winifred to events at which she attempted to match him to any young girl who possessed most of her teeth and a modicum of intelligence. Despite the complaints of his more marriage-minded friends, London’s ballrooms were populated with a fair number of personable, clever young women. Yet they were all utterly unexceptionable. Blending in to one another. All but one.

Another touchstone from his youth.

It seemed she was everywhere, lighting up the ballrooms with her laugh and her sharp wit. Not to mention her beauty. He’d read about eyes flashing in bad poetry and Minerva Press novels (the officers had needed some amusement during the war), but Kate’s eyes did. Everything about her was intense.

Now, she flitted about the dance floor on Lindley’s arms, and for one brief moment she looked his way, and Peter caught the flash of recognition. A brightening that narrowed quickly to contempt.

That brief contact, as it increasingly had over the last few months, spurred him to be at her side when she exited the dance. To be where she was forced to acknowledge him. After all, for a woman of no title and only a respectable dowry, ignoring a duke, one who was considered a war hero no less, though Peter privately thought the epithet too easily given to a man who had done nothing any other man wouldn’t do, would hardly endear her to society.

“Your Grace, fine night, is it not?” Lindley said. His smile was affable and open, and his hold on Kate’s arm, proprietary. Interesting. Especially considering the man’s attentions to the Hightower girl earlier that evening.

“Your Grace,” Kate acknowledged with a nod of her head, but the curve of her lips and the tone of her voice were mocking.

Her eyes widened and then narrowed. He didn’t know what continually possessed him to needle her, but this had been the way between them ever since that day by the river. Kate was a brat. And he had little doubt she was about to claim some prior commitment, whether it existed or not. She was popular enough for each dance to be already claimed.

The Mystery of the Man in the Tall Black Hat by Margaret M. Sandberg
Revenant Eve by Sherwood Smith
For Life by L.E. Chamberlin
Shadowstorm (The Shadow World Book 6) by Dianne Sylvan
Milagro, se ha muerto Mamá by Alfonso Ussia
Janus by Arthur Koestler
Secret Ingredients by David Remnick
The Price of Power (The Price of Secrets Series Book 2) by Ashley Drake
Why Do Men Fall Asleep After Sex? by Mark Leyner
All Shook Up by Susan Andersen
Our partner