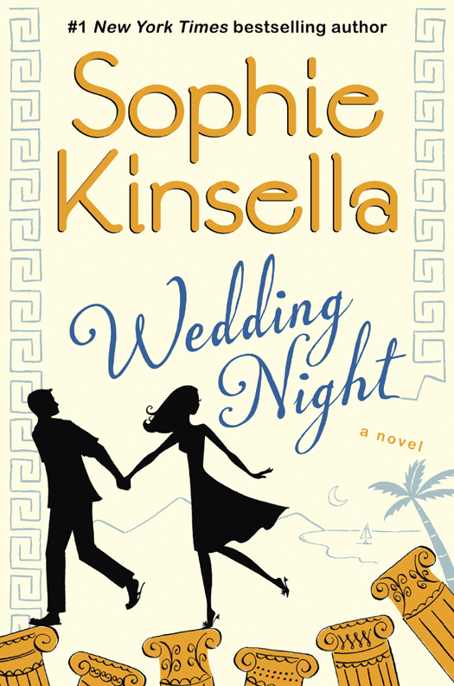 Wedding Night
is a work of fiction. Names, characters, places, and incidents either are the product of the author’s imagination or are used fictitiously. Any resemblance to actual persons, living or dead, events, or locales is entirely coincidental.

Published in the United States by The Dial Press, an imprint of The Random House Publishing Group, a division of Random House, Inc., New York.

Published simultaneously in the United Kingdom by Bantam Press, an imprint of Transworld Publishers, a division of The Random House Group, Ltd.

Youth is still where you left it, and that’s where it should stay. Anything that was worth taking on life’s journey, you’ll already have taken with you.

Twenty years I’ve been saying this, but do they listen? Do they, hell. Here comes another of them now. Panting and puffing as he reaches the top of the cliff. Late thirties, I’d guess. Attractive enough, against the blue sky. Looks a bit like a politician. Do I mean that? Maybe a movie star.

I don’t remember his face from the old days. Not that that means anything. These days I barely even recall my own face when I glimpse it in the mirror. I can see this chap’s gaze raking the surroundings, taking in me sitting in my chair under my favorite olive tree.

“Are you Arthur?” he says abruptly.

I scan him adroitly. Looks well off. Wearing one of those expensive-logo polo shirts. Probably good for a few double Scotches.

“You must want a drink,” I say pleasantly. Always useful to steer the conversation in the direction of the bar early on.

I can’t help stifling a yawn. So predictable. He wants to know what happened. Another merchant banker having a midlife crisis, returning to the scene of his youth. The scene of the crime. Leave it where it
was
, I want to answer. Turn round. Return to your adult, problematic life, because you won’t solve it here.

But he wouldn’t believe me. They never do.

“No,” he says impatiently, and rubs his sweaty brow. “You don’t understand. I’m here for a reason. Listen to me.” He comes forward a few paces, an impressive height and figure against the sun, intentness of purpose on his handsome face. “I’m here for a reason,” he repeats. “I wasn’t going to get involved—but I can’t help it. I have to do this. I want to know
what exactly happened
.…”

I’ve bought him an engagement ring. Was that a mistake?

I mean, it’s not a
girly
ring. It’s a plain band with a tiny diamond in it, which the guy in the shop talked me into. If Richard doesn’t like the diamond, he can always turn it round.

Or not wear it at all. Keep it on his nightstand or in a box or whatever.

Or I could take it back and never mention it. Actually, I’m losing confidence in this ring by the minute, but I just felt bad that he wouldn’t have anything. Men don’t get the greatest deal out of a proposal. They have to set up the occasion, they have to get down on one knee, they have to ask the question,
and
they have to buy a ring. And what do we have to do? Say “yes.”

I wonder what proportion of marriage proposals end in a
“yes” and what proportion end in a “no”? I open my mouth automatically to share this thought with Richard—then hastily close it again.
Idiot
.

I sip my water and smile lovingly at Richard. We’re sitting at a corner table overlooking the river. It’s a new restaurant on the Strand, just up from the Savoy. All black-and-white marble and vintage chandeliers and button-back chairs in pale gray. It’s elegant but not showy. The perfect place for a lunchtime proposal. I’m wearing an understated bride-to-be white shirt, a print skirt, and have splashed out on stay-up stockings, just in case we decide to cement the engagement later on. I’ve never worn stay-up stockings before. But, then, I’ve never been proposed to before.

Ooh, maybe he’s booked a room at the Savoy.

No. Richard’s not flash like that. He’d never make a ridiculous, out-of-proportion gesture. Nice lunch, yes; overpriced hotel room, no. Which I respect.

He’s looking nervous. He’s fiddling with his cuffs and checking his phone and swirling the water round in his glass. As he sees me watching him, he smiles too.

It’s as though we’re speaking in code, skirting around the real issue. I fiddle with my napkin and adjust my chair. This waiting is unbearable. Why doesn’t he get it over with?

No, I don’t mean “get it over with.” Of course I don’t. It’s not a vaccination. It’s … Well, what is it? It’s a beginning. A first step. The pair of us embarking on a great adventure together. Because we want to take on life as a team. Because we can’t think of anyone else we’d rather share that journey with. Because I love him and he loves me.

I’m getting misty-eyed already. This is hopeless. I’ve been like this for days, ever since I realized what he was driving at.

He’s quite heavy-handed, Richard. I mean, in a good, lovable way. He’s direct and to the point and doesn’t play games. (Thank
God
.) Nor does he land massive surprises on you out of the blue. On my last birthday, he hinted for ages that his present was going to be a surprise trip, which was ideal because I knew to get down my overnight bag and pack a few things.

Although, in the end, he
did
catch me out, because it wasn’t a weekend away, as I’d predicted. It was a train ticket to Stroud, which he had biked to my desk with no warning, on my midweek birthday. It turned out he’d secretly arranged with my boss for me to have two days off, and when I finally arrived at Stroud, a car whisked me to the most adorable Cotswold cottage, where he was waiting with a fire burning and a sheepskin rug laid out in front of the flames. (Mmm. Let’s just say that sex in front of a roaring fire is
the best thing ever
. Except when that stupid spark flew out and burned my thigh. But never mind. Tiny detail.)

So this time, when he began dropping hints, again they weren’t exactly subtle indications. They were more like massive signposts plonked in the road:
I will be proposing to you soon
. First he set up this date and called it a “special lunch.” Then he referred to a “big question” he had to ask me and half-winked (to which I feigned ignorance, of course). Then
he started teasing me by asking if I like his surname, Finch. (As it happens, I do like it. I don’t mean I won’t miss being Lottie Graveney, but I’ll be very happy to be Mrs. Lottie Finch.)

I almost wish he’d been more roundabout and this was going to be more of a surprise. But, there again, at least I knew to get a manicure.

“So, Lottie, have you decided yet?” Richard looks up at me with that warm smile of his, and my stomach swoops. Just for an instant I thought he was being super-clever and that
was
his proposal.

“Um …” I look down to hide my confusion.

Of course the answer will be “yes.” A big, joyful “yes.” I can still hardly believe we’ve arrived at this place. Marriage. I mean, marriage! In the three years Richard and I have been together, I’ve deliberately avoided the question of marriage, commitment, and all associated subjects (children, houses, sofas, herbs in pots). We sort of live together at his place, but I still have my own flat. We’re a couple, but at Christmas we go home to our own families. We’re in
that
place.

After about a year, I knew we were good together. I knew I loved him. I’d seen him at his best (the surprise birthday trip, tied with the time I drove over his foot by mistake and he didn’t shout at me) and his worst (obstinately refusing to ask for directions, all the way to Norfolk, with broken sat nav. It took six hours). And I still wanted to be with him. I
got
him. He’s not the show-offy kind, Richard. He’s measured and deliberate. Sometimes you think he’s not even listening—but then he’ll come to life so suddenly, you realize he was alert the whole time. Like a lion, half asleep under the tree but ready for the kill. Whereas I’m a bit more of a gazelle, leaping around. We complement each other. It’s Nature.

(Not in a food-chain sense, obviously. In a
metaphorical
sense.)

So I knew, after a year, he was The One. But I also knew what would happen if I put a foot wrong. In my experience, the word “marriage” is like an enzyme. It causes all kinds of reactions in a relationship, mostly of the breaking-down kind.

Look at what happened with Jamie, my first long-term boyfriend. We’d been happily together for four years and I just happened to mention that my parents got married at the same age we were (twenty-six and twenty-three). That was it. One mention. Whereupon he freaked out and said we had to take “a break.” A break from what? Until that moment we’d been fine. So clearly what he needed a break from was
the risk of hearing the word “marriage” again
. Clearly this was such a major worry that he couldn’t even face seeing me, for fear that my mouth might start to form the word again.

Before the “break” was over, he was with that red-haired girl. I didn’t mind, because by then I’d met Seamus. Seamus, with his sexy Irish lilting voice. And I don’t even
know
what went wrong with him. We were besotted for about a year—crazy all-night-sex nothing-else-in-life-matters besotted—until all of a sudden we were arguing every night instead. We went from exhilarating to exhausting in about twenty-four hours. It was toxic. Too many state-of-the-nation summits about “Where are we heading?” and “What do we want from this relationship?” and it wore us both out. We limped on for another year, and when I look back, it’s as though that second year is a big black miserable blot in my life.

Then there was Julian. That lasted two years too, but it never really
took
. It was like a skeleton of a relationship. I suppose both of us were working far too hard. I’d recently
moved to Blay Pharmaceuticals and was traveling all over the country. He was trying to get partnership at his accountancy firm. I’m not sure we ever even broke up properly—we just drifted apart. We meet up occasionally, as friends, and it’s the same for both of us—we’re not quite sure where it all went wrong. He even asked me out on a date a year or so ago, but I had to tell him I was with someone now and really happy. And that was Richard. The guy I really do love. The guy sitting opposite me with a ring in his pocket (maybe).

Strike by Delilah S. Dawson
Secret Historian: The Life and Times of Samuel Steward, Professor, Tattoo Artist, and Sexual Renegade by justin spring
Let the Games Begin: Story 1 of The Wife Games by Arla Coopa
See Jane Run by Hannah Jayne
Minus Me by Ingelin Rossland
Andrew: Lanning’s Leap: Erotica Shapeshifter Romance (Lanning's Leap Book 5) by Kathi S. Barton
My Masters' Nightmare Season 1, Ep. 6 Consequences by Marita A. Hansen
And Then There Was No One by Gilbert Adair
Almost Mine by Winters, Eden
Rebecca Rocks by Anna Carey
Our partner