Read Wedding of the Season Online

Wedding of the Season 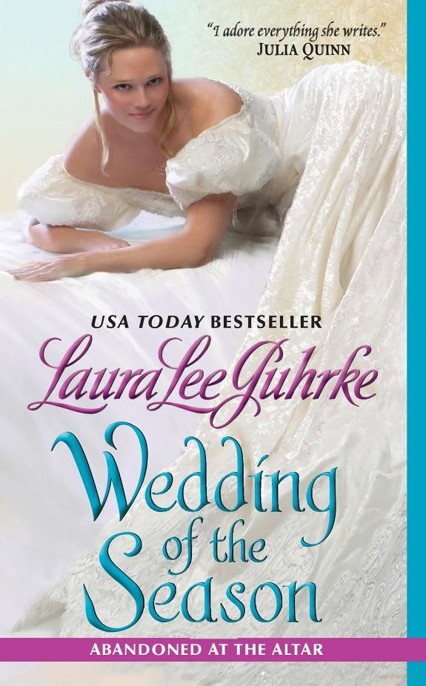 Wedding of the Season

Abandoned at the Altar

In loving memory of

The truest friend anyone could ask for.

I miss you, Dixi.

And for her sister,

And for their father,

May God be with all of you. Rest in peace.

The Earl of Danbury

Requests the honor of your presence

At the marriage of his daughter,

The Marquess of Richfield,

Son of the Duke of Sunderland

The fifteenth day of September, 1896

At half past twelve o’clock

From Mrs. Delilah Dawlish, journalist, in her weekly column for the society newspaper
Talk of the Town
, Monday, 7 September 1896:

My dears, a little bird has confirmed that the wedding of the season has been called off! Great tact and delicacy are being employed on both sides, needless to say, but this intrepid columnist is undaunted by such trifles. The call to truth and the people’s right to know demand that I pass along the exclusive details to you.

Lord Richfield has been invited to accompany that great and learned archaeologist Sir Edmund Tavistock, to Egypt, and Lady Beatrix has freed him from their engagement. This columnist can only conclude that Lord Richfield finds searching for Egyptian mummies a more fascinating occupation than matrimony.

Poor, poor Lady Beatrix. One can only imagine what she must be suffering. We weep for our sister woman in her devastating humiliation. And if this reporter learns any more of the delicious details, I promise that you, my dear readers, will be the first to know.

My deepest sympathies on the passing of your father. I am sorry to hear that you are unable to attend the investiture ceremony in the House of Lords conferring ducal title, but our firm shall be happy to undertake the filing of the official documents and handle all matters pertaining to the estates in your absence. Good luck with your excavations in Egypt. What an adventure! I confess, I envy you.

I remain, my Lord Duke, Your Grace’s most obedient servant.

Despite the serious illness of her father, Lord Danbury, Lady Beatrix has graciously offered her presence again this year to open the May Day Charity Auction for the Benefit of Widows and Orphans. As is customary, this worthy event will be held on the village green, next to the vicarage. The new vicar, Mr. Venables, has told the Telegraph he is delighted by Lady Beatrix’s generosity and her tireless devotion to the less fortunate and hopes all within the parish will pray with fervor for the quick recovery of her father.

From Mrs. Delilah Dawlish, journalist, in her weekly column for the society newspaper
Talk of the Town
, Monday, 9 September 1901:

My dear readers, I have the most deliciously appalling news. Lady Beatrix Danbury has been seen cavorting in Cornwall! Since it is her usual custom to spend August at Torquay, we had first thought the worthy Lady Beatrix to be hiding away in Cornwall for the proper year of mourning and seclusion required by the death of her father, the Earl of Danbury, earlier this year. But no, I regret to say such is not the case at all, and her purpose seems to be neither mourning nor seclusion, but enjoyment! She is staying at the seaside cottage of her scandal-ridden cousin, Baroness Yardley, and has been seen riding in the baroness’s motorcar at reckless speeds, drinking champagne on the baroness’s balcony, and walking (without either shoes or stockings!) on the beaches. She even appeared in public, attending the St. Ives Summer Ball last Tuesday evening.

After the humiliating rejection she suffered at the hands of the Duke of Sunderland (Lord Richfield) five years ago, we had concluded in these pages that Lady Beatrix was destined to no greater glory than good works and spinsterhood. That conclusion seems to have been premature, however, for she was said to have enjoyed a full dance card Thursday evening, including two waltzes with the handsome, oh-so-eligible Duke of Trathen! His Grace, who has a reputation for impeccable manners and a commendable regard for propriety, seemed willing to overlook his dance partner’s lack of same. This oversight we can only attribute to Lady Beatrix’s extraordinary beauty (and perhaps to the scandalously deep décolleté of her ball gown). The gown, designed by her close friend, the fashionable dressmaker Vivienne, had not so much as a ribbon of black upon it to mark her father’s passing.

Fast motorcars, flouting of mourning customs, indecent exposure of her ankles to public view upon the Cornish beaches? What is the world coming to when a flower of feminine devotion and virtue like Lady Beatrix arrives at such a pass? We can only wait and see what happens next, my dears!