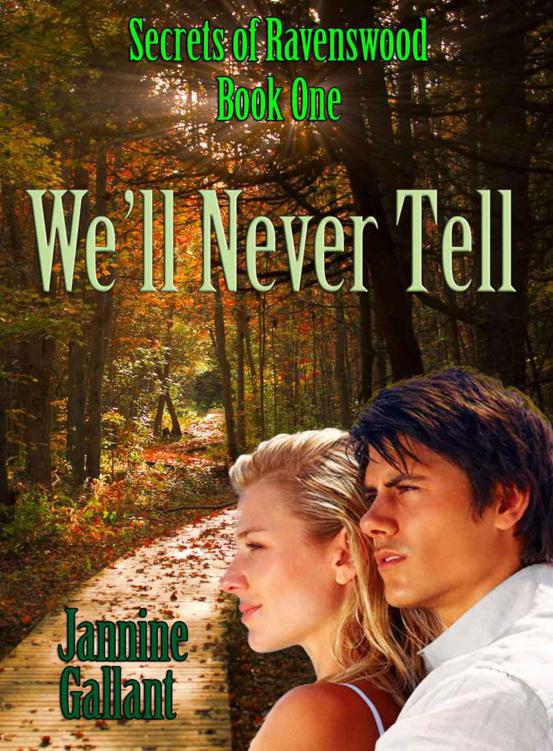 Other Books by Jannine Gallant

Secrets
of Ravenswood Book One

This
book is a work of fiction and all characters exist solely in the author’s
imagination. Any resemblance to persons, living or dead, is purely
coincidental. Any references to places, events or locales are used in a
fictitious manner.

ALL
RIGHTS RESERVED. With the exception of quotes used in reviews, this book may
not be reproduced or used in whole or in part by any means existing without
written permission from Jannine Gallant.

For three lifelong
friends, will past tragedies haunt their futures—or open the door to love…

Three young girls
witness a murder—and make a pact never to tell what they saw. But when the
woman’s body is uncovered seventeen years later, the killer’s faith in their
promise is shaken. A few deadly reminders may be in order…

Samantha Beaumont knows
it’s time to reveal the truth about what happened in the woods all those years
ago—until the accidents begin. Fear that the killer will shut them up
permanently leads Sam on a quest to protect her friends and expose the
murderer’s identity. No one, certainly not the man she spent one memorable
night with, will stop her.

Ethan Thorne has no
reason to believe Sam is any more interested in a commitment now than when she
ran from him five years before. Still, he can’t resist trying one more time…
When he realizes her life is in danger, he’ll risk everything for a chance at
love.

Other Books by Jannine Gallant

Nothing But Trouble (
Honky
Tonk Hearts
)

To Margo Hoornstra, good friend, critique
partner, and terrific author, I couldn’t have written this one without your
invaluable suggestions and editing. Thank you!

“My mom will
kill
me if she finds out about this, Sam. Camping in a graveyard is just asking for
trouble.”

Samantha Beaumont ducked
beneath the low limb of a fir tree before glancing over her shoulder at her
friend. Moonlight filtered through the forest, casting shadows across the tense
set of Darby Kincade’s shoulders.

“Your mom won’t know if
you don’t tell her. And, hey, if she does kill you, at least you’ll be in the
right place.”

“How come you’re so
grumpy? Are you afraid of ghosts?”

“Who cares about ghosts?
I’m more afraid we’ll get eaten by a bear.” Juliette Shaw’s voice quavered, and
she edged closer to Sam. “They won’t even know where to look for our bodies.”

“Don’t be a chicken.
Bears are more scared of us than we are of them.”

“Doubtful, seriously
doubtful,” Darby said and slapped at a mosquito.

Sam rolled her eyes and
plunged through the thimbleberry bushes. They’d lost the trail a half mile
back, but she knew where she was going. The abandoned graveyard—if you could
call a handful of toppled headstones a graveyard—was directly below Prophet
Point. Even at night, the peak was visible, a dark shadow looming over the town
of Ravenswood, nestled high in the Sierra Nevada Mountains.

“We could have simply
camped in your backyard if you’re so in love with the idea of sleeping with
bugs,” Juliette said. “You didn’t have to drag us all the way up here.”

“Where’s the fun in
that? Summer’s been a major bore since school let out. Anyway, Wyatt dared me.”

Darby stopped walking
and fisted her hands on her hips. “I should have known there was a reason for
this. Your brother’s an idiot.”

“Yep, a complete moron,
but you have to admit this is more exciting than a sleepover at one of our
houses.” Sam hesitated at a thick stand of pine trees. Maybe they needed to
head a little more to the north.

“If you call getting
eaten by mosquitoes fun.” Juliette waved her hands in front of her face.

“I have repellent in my
backpack.”

“Can we put some on? I
don’t want to get covered in bites.”

Sam slid the pack off
her shoulders. It hit the ground with a thump. “Good idea. We should have
sprayed down before we left the house.”

“What was that?” Darby
asked in loud whisper.

Sam’s head snapped up,
and her hand clenched around the can of bug repellent. “I didn’t hear
anything.”

“I bet it’s Wyatt,
trying to scare us,” Juliette whispered.

A female voice echoed
through the night, speaking rapidly like the tinny squawk of a blue jay, rising
in pitch. A lower voice answered, more controlled, but something about it sent
a shiver down Sam’s spine.

“Let’s get out of here.”
In the moonlight, Juliette’s eyes were dark pools in her pale face. “I’m
scared.”

Sam squared her
shoulders. Even if she was a little nervous, she certainly wouldn’t admit it to
her best friends. “The lady sounds upset. Maybe they’re lost or something.
They’re probably just dumb tourists. There’s a million of them around since
summer started.”

“Not our problem,” Darby
hissed.

“Let’s take a quick peek
to make sure they aren’t in trouble. What if one of them is hurt?”

Ignoring Juliette’s
protest, Sam turned and pushed through the underbrush, her heart beating fast.
The other girls fell in behind, so close they brushed against her with each
step. Through the thinning trees ahead, the flickering flames of a campfire
illuminated a tiny clearing. A woman faced in their direction, arms crossed
over the chest of a bright pink jacket, hair glowing like a bronze halo in the
firelight. A tall man stood with his back to them, wearing a navy blue parka
and a knit ski hat. His hands were fisted at his sides. Sam edged behind a big
cedar tree and held her breath.

“You waited until we
were here, in one of my favorite places, to tell me? You couldn’t have said
something before we left home?” The man’s words cracked like a gunshot in the
still air.

“I tried, but you
wouldn’t listen. You were so excited about this camping trip…” She hunched one
shoulder. “Maybe waiting was a mistake.”

“You think?” He kicked a
rock, sending it ricocheting off the big stones circling the fire. “Are you
going to tell me why you’re dumping me?”

Darby tugged on the back
of Sam’s sweatshirt. “Let’s go,” she whispered.

Sam shook her head and
pressed her finger to her lips. The drama unfolding at the campfire was better
than the soap operas Mrs. Dennison watched while she was folding laundry.

The woman dashed a hand
across her eyes, leaving a smear of mascara on her pale cheek. “Our
relationship just isn’t working.”

He took a step toward
her. “Is there someone else? Is that it?” His voice took on a menacing edge as
it rose.

Sam shrunk back against
her friends, and Juliette let out a tiny whimper.

“Is it that long haired
pussy boy from your study group? He’s always around. I thought he was gay, or I
would have—”

The woman choked on a
sob. “There isn’t anyone. You have to believe me.”

The man moved forward,
his steps slow and purposeful. When he grabbed her arm, she let out a cry.

Blood roared in Sam’s
ears. She stepped out from behind the tree.

“Let go of me,” the
woman screamed.

“Bitch,” he shouted,
giving her a shove.

She fell backward and
tripped, arms flailing. Her head hit one of the rocks circling the fire with a
sickening thud.

“Oh God, oh no.” The man
knelt at the woman’s side and touched her face. Slowly he stood and backed
away. “Shit, shit, shit!”

Juliette was crying,
gasping sobs muffled by her hands. Sam stared into her friend’s petrified eyes
and opened her mouth. Nothing came out. She tried again, her voice a horse
rasp. “Run.”

They fled. Tree limbs
slapped their faces, and dead branches crunched beneath their feet. Sam’s side
ached with her labored breathing. Behind them footsteps pounded, drawing
closer. Darby screamed, and Sam spun, her running shoes sliding in the pine
needles. She went down hard on one knee.

The man held Darby, his
arm wrapped around her waist while she kicked and struggled. The knit hat was
pulled low over his forehead, and the collar of his jacket was zipped high
above his chin. In the dim moonlight, only his eyes were visible, narrowed dark
orbs in the pale blur of his face.

“Let go of her,” Sam
yelled. Her legs trembled as she pushed up from the ground and clung to
Juliette’s hand.

His whole body shook
with tremors as he clutched Darby tighter, eyes darting wildly about. “After we
get something straight.” He gave Darby a hard shake, and she stilled. “You
girls are going to go home, and you aren’t going to say a word about what you
saw tonight.”

His voice, low and
threatening, sent an icy shiver sliding down Sam’s spine. “We won’t say a
thing.”

“Do you know what’s
going to happen if you do?”

Darby’s eyes widened in
terror, and tears trailed down her cheeks. “What?”

He grasped her chin in
his big hand. “If you tell, little girl, I won’t hurt you. I’ll hurt your
friends, instead. That goes for each one of you. You don’t want that to happen,
do you?”

The Looming Tower by Lawrence Wright
Dragon's Triangle (The Shipwreck Adventures Book 2) by Christine Kling
The Saint John's Fern by Kate Sedley
Saving Gary McKinnon by Sharp, Janis
Need You for Always (Heroes of St. Helena) by Marina Adair
Revenge by Lisa Jackson
Claimed by the Elven King: Part Four by Cristina Rayne
Alexandria by Kaden, John
The Beholder by Ivan Amberlake
Marine One by James W. Huston
Our partner