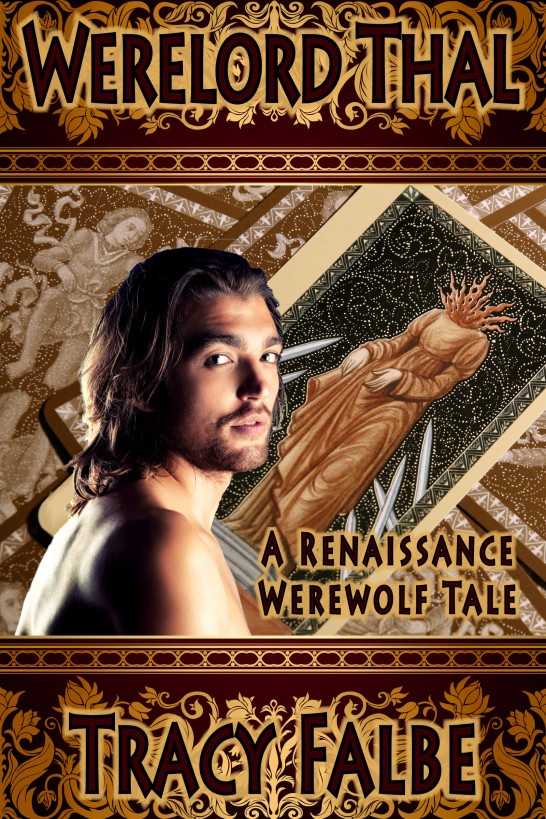 First published 2013 by Brave Luck Books ™ an
imprint and trademark of Falbe Publishing.

This book is a work of fiction. The
characters and events described herein are products of the author’s
imagination. Any resemblance to actual persons, living or dead, is
coincidental and not done on purpose by the author.

This work is protected by U.S and
International copyright law. All rights reserved to the copyright
holder, Tracy Falbe, who spent a year of her life developing and
crafting this story and whose written works generate one of her few
sources of income. Except for reasonable quotes and excerpts by
reviewers, the content of this book cannot be reproduced or
distributed in whole or part in any medium without express written
permission from the publisher.

Other fantasy novels by Tracy Falbe

Chapter 4. Fire in the Night

Chapter 6. From the Forest

Chapter 10. Protector of the Weak

Chapter 14. The Castle of Lord Patercek

Chapter 16. The Devil Instead

Chapter 19. Voice to His Grief

Chapter 33. No Rules or Light of Day

Chapter 35. Not Really a Thief

Chapter 39. A Cross to Bear

Chapter 43. The Side of the Law

Excerpt from Journey of the Hunted

Excerpt from Rys Rising: Book I

Other fantasy novels by
Tracy Falbe

Werewolves in the Renaissance series

Journey of the Hunted: Book 2

Union of Renegades: Book I

The Borderlands of Power: Book IV

Find all novels in multiple formats at
www.braveluck.com
.

He raised his mouth and howled like he never had
before. A huge sound trumpeted from his great throat with an
intelligent rage that put the world on notice that he would defend
his right to live.

The sound filled the vale with shuddering energy.
Peasants clutched their covers and stared into the darkness.
Children whimpered in their little beds. Praying monks faltered in
their entreaties to a higher power when the voice of the Earth
beneath their knees called them to attention.

“I’ll show them the Devil’s own magic,”
Gretchen snarled.

She held a sapling while she caught her
breath. Her legs were shaking. The incline was defeating her old
knees. Many years had passed since she had run up and down hills,
and this would surely be the last time.

Her pursuers were crossing the pasture at the
bottom of the hill. Her path across the thick grass was easy to see
because her skirt had wiped the sparkling dew away. The sun rising
behind the four men cast their shadows across her tracks. Two burly
dogs pulled at their leashes.

Gretchen had been fleeing since the middle of
the night when a line of torches had come up the weedy lane to her
cottage. She dreaded when the dogs would bring her down. She wished
they would maul her to death right here and leave her body on the
fragrant Earth, but the men would pull the dogs off and take her
away to even worse torments and burning death.

Gasping for breath, she watched her pursuers
disappear into the coppiced woods at the bottom of the hill. She
hauled herself up by the sapling and forced her creaking legs to
run again. She knew where she was going. She had a secret place
back in these hills.

In former days she had lived in secret places
where magic was still strong and the world unsullied by the
careless tread of ignorant men. She had been young then and known
love and learned of powers that tapped into primal mysteries with
open eyes. The nonsense magic her judges attributed to her was
nothing compared to what she knew and what she had done.

Her heart thudded and her vision blurred.
When she fell, her spine rattled, but she sprang back up and ran
onward. She reached the top of the hill and started skidding down
the other side.

The trees were old on this side of the hill.
They were just far enough from the needy axes of village and town.
Gretchen felt the spirits of the thick-trunked oaks swell against
her flesh. She tripped again and twisted her ankle. Pain flared,
but madly she limped toward the granite boulders jutting from the
dark leafy humus farther downhill. Finally she flopped against the
mossy stone. Even in her frantic state, she noticed a cluster of
mushrooms in the shadow of a boulder. Their peculiar caps told of
another cold spring.

The baying dogs slapped her mind away from
its habitual cataloging of the land. She slid around the cool
boulders until her feet splashed into a tiny spring. Above the pure
water Gretchen brushed the leaves and dirt out of a cleft in the
rock. Her dirty fingers found a silver box. Blackish corrosion
crusted the metalwork. Her shaking hands cracked open the box that
she had left here when she was a much younger woman.

She gasped at the lock of hair within. A rush
of memories overtook her mind. The curving tuft of reddish brown
hair with fine streaks of black and silver summoned vividly her
son’s face. He had looked at her so trustingly when she had snipped
the hair on their last day together.

“To remember you by,” she had whispered, and
he had believed her.

He had thought that he was going to the
forest forever, beyond the reach of all, but Gretchen had plotted a
way to bring him back to her.

Despite her selfish trick, she had resisted
the longings of a mother’s heart and not summoned him. She had
lived her life and grown old, but now…

Voices were at the top of the hill. The dogs
barked insistently. Their paws pounded down the slope and vibrated
with her doom.

Tears wetted Gretchen’s cheeks. She was
afraid, not of death but of the brutality that would bring it. She
should leave her son free and not trouble him with the wickedness
of her nasty world, but she wanted to lash out and not only for
herself but for the dear friends who had died so terribly. Her name
had been dragged across their lips in the butcher shop of
authority.

When she bent over the pool, a tear fell into
the glistening spring water. The spell would be all the stronger
for it.

“Forgive me, Thal, but I would have them know
my justice,” Gretchen said.

She dipped the lock of hair into the
water.

“From the birth waters of our Earthly womb,”
she murmured reverently.

The hair darkened in her wet fingers. She
drew a knife and slashed across her wrist. Gushing blood obscured
the meat and vessels beneath the skin. Blood flowed over her hand
and pooled in her palm and soaked the hair.

“From the birth blood of the woman who bore
thee, I call my son to me! Thal!” Gretchen cried and the dogs hit
her.

Jaws gripped her upper arm. Another set of
happy fangs dove for an ankle. She was thrown down. Water splashed.
The animals tore at her and shook her. She cowered in the most
useless shock, screaming.

Boots muddied the delicate ground along the
spring. Grungy men in leather waded into the clean water.
Deep-voiced cursing and grunting mixed with the dogs’ snarling.
When the animals were finally hauled off, half her clothes were
ripped away. The snapping servants back in the grip of their grim
masters chomped triumphantly on the remnants.

Two men flung her blood smeared body against
the boulder.

A dour man with a narrow face and a lanky
height loomed over Gretchen. A heavy black cloak encased his
shoulders and the pendant of the Prague Court hung over his chest,
shining with his right to abuse her.

“Holy Christ protect us from this Devil
bride,” he said.

Her brazen misery disgusted him. “You make us
chase you till dawn and add to your sins with a try at suicide,” he
criticized.

“More proof she seeks the Devil’s favor,”
another man put in.

“That it is,” the tall man agreed and yanked
out a handkerchief. He wound the pitiful bandage around her
bleeding wrist and tied it tight against her scarlet defiance.

“What’s in your hand, witch?” he demanded
upon noticing her clenched fingers. He pried open her hand and
pulled out the redly sodden tuft of hair. Gretchen moaned.

The gathered men gasped when he lifted the
odd find. “Fur pulled from the very back of your goat lover,” he
said, almost in awe.

“Constable, look,” a man said and held up the
tarnished box.

“Give that to me,” the leader said. He looked
over the box but could determine no meaning from it. He put the
lock of hair into it and pressed the lid back in place. He knew
someone who paid coin for such rare objects.

He struck her across the face. “Bind her
mouth before she speaks some spell upon us,” he said.

The wolf lifted his head. His pack mates
dozed around him comfortably, except for the alpha male. His long
legs and thick paws were twitching. The mighty pack leader grunted.
His lips pulled back and revealed heavy canines.

Dick by Scott Hildreth
Courting the Darkness by Fuller, Karen
To Catch a Star by Romy Sommer
Another Bullshit Night in Suck City by Nick Flynn
Transcription by Ike Hamill
Muscling Through by J.L. Merrow
078 The Phantom Of Venice by Carolyn Keene
Risk Is a Four-Letter Word by Erin M. Leaf
Other Worlds by KATHY
Rhythm by Ena
Our partner