Read Wet Desert: Tracking Down a Terrorist on the Colorado River Online

Wet Desert: Tracking Down a Terrorist on the Colorado River 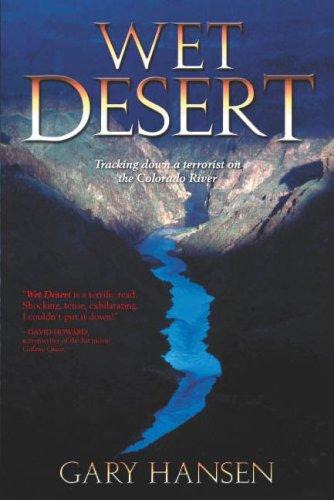 Tracking down a terrorist on the Colorado River

"It reminded me a great deal of reading a Tom Clancy novel, but it is faster paced and the device doesn't slow down the story. But like Clancy, the author welds together diverse story lines and characters into one highly suspenseful tale that has the reader reluctant to miss a word or to set the book down." -- Meridian Magazine

"
was an exiting novel, I relished the entire book. It was a supremely engaging story with a lyrically drawn sense of place. This is a stellar debut." -- Once
Upon
a Crime,
.

"I could tell you this is a fast paced page turner. I could also suggest that through most of this book you will find yourself on the edge of your seat, but it would not do justice to this spine tingling thriller. I recommend one last trip down a
you have never before experienced." -- Sam Weller's Zion Bookstore

"
is a fast paced book that takes place over a three day period. Descriptions of the collapsing dams and muddy, fast flowing water keep the reader involved and turning pages. The reader watches the damage happen while the long-term repercussions are discussed and illustrated. This book by a first time author is worth looking into." -- Mysterious Galaxy,

"
succeeds in creating gripping suspense while making readers realize that even a behemoth like Glen Canyon Dam cannot be taken for granted. The book keeps you in suspense throughout by using a local "sacred cow" to grab our attention and not let go." -- The
Chronicle

This book is an original publication of Hole Shot Press. www.holeshotpress.com

Note: This book is a work of fiction. Although many of the places referenced in the book are real, some characteristics have been changed to fit the story. Some real historical characters and events have been mentioned to enhance the story. However, the characters and events in this book are products of the author's imagination or are used fictitiously. Any resemblance to actual persons, living or
dead,
is entirely coincidental.

All rights reserved. No part of this book may be used or reproduced without written permission, except in the case of brief quotations embodied in reviews.

To Kelly, Kevin, Jennifer and Allison

Grant Stevens braced for the explosion. He felt tightness in his stomach and up the back of his neck. He glanced sideways at his friend Bruce Godfrey and saw wild eyes and a tense smile. Bruce stared unflinchingly at the bombsite across the canyon. Neither of them would have missed this for the world. Grant looked back just in time.

The bombs detonated. Grant's entire torso flinched. Porcupine Dam exploded as particles jettisoned in soaring arcs above the structure. The concrete face of the dam came to life, bursting outward. A dust cloud expanded from the rubble, obscuring the entire structure of Porcupine Dam. Smaller clouds mushroomed out of the large one, in what seemed like a series of secondary explosions. Some of the rocks and pieces of concrete were propelled high in the sky, with trajectories like fireworks on the Fourth of July.

For an instant, Grant panicked. He was far too close. The onslaught of rocks and concrete would rain down on him, and kill him instantly. He would have no chance of escape. But then, as if on cue, the outward energy died. The particles reached the apex of their eruption and fell back to earth. Grant would not be killed after all, and he felt like an idiot for thinking it in the first place.

He relaxed. The explosion had been far more intense than he had expected, making him forget that they had not yet heard the noise. When the sound wave reached him, he ducked again. The loud impact made him feel like his chest might be crushed or his head split. He reached instinctively to cover his ears, in spite of the expensive twenty-decibel ear protection, clutching them tight to his head until the sound dissipated.

Only the dust was visible now, churning on itself like a thundercloud, and covering the carnage underneath. Although the dam's concrete structure was completely decimated by the explosion, and reduced to rubble, no flash floods or waves of water could be seen. In fact, no water could be seen at all in the streambed, or anywhere else below the dam. No reservoirs were released downstream by the demise. The canyon below the dam remained dry.

Grant realized he had never seen anything so spectacular in his life. He felt goose bumps on his arms and a grin spreading across his face. He stared at the fog of dust covering the far side of the canyon. A sound from behind startled him. It was a mixture of clapping, yelling, and a few whistles. Grant looked around and saw Bruce and the others applauding towards the demolished Porcupine Dam. At first, the cheering seemed foreign and wrong, but he slowly realized he felt the same way, and after a moment he joined in and clapped enthusiastically.

He glanced around at the others who were in attendance. Standing next to him on a flat plateau across
from the dam was a group of managers from the Bureau of Reclamation, representatives from the U.S. Department of Interior, and a large number of local politicians and various other VIPs from the
metropolitan area, including the governor of
. The plateau, which acted as a grandstand for the large group, was conveniently located a half-mile downstream from the dam.

Below the plateau, sprinkled up and down the slopes, were the non-VIPs. This much larger group, which Grant estimated at a few thousand, was made up of non-managerial staff from the Bureau, farmers who had once irrigated using the water from Porcupine Reservoir, curious local residents, and a group of environmentalists with a banner that read: Free the Rivers, Kill the Dams. A scattering of deputy sheriffs infiltrated the group to keep peace between the environmentalists and the farmers.

While he stood and stared, he was vaguely aware of someone collecting the ear protection in a large basket.
When the man, a Hispanic in a maroon tuxedo, approached, Grant deposited his ear protection in the basket with a mumbled "thanks."
He looked back at the demolition site. The change was incredible. He had never seen anything like it. He rubbed his hand on his chest and admitted it still felt tight. He peered down into the canyon, but the dust frustrated his ability to see much of anything. If only the wind would blow the cloud away. However, that afternoon,
was devoid of any wind or even a breeze.

This event, which had drawn so many spectators up
on a hot Monday, was the culmination of five years of lawsuits, political jockeying, and environmental studies. Ironically, the Bureau of Reclamation, which had fought hardest against decommissioning Porcupine Dam, was now in charge of the event, and celebrating the dam's demise. Grant felt hypocritical. In spite of the excitement of witnessing the explosion, ultimately Grant wanted to build dams, not blow them up. As a manager for the Bureau of Reclamation, he detested the thought of destroying a working concrete dam. Although Porcupine Dam was not in the same league as the bigger, more well-known dams in the west, its sheer simplicity made it remarkable to an engineer like him - just a sweeping concrete arch, with two rounded spillways sculptured right in the middle.

Bruce Godfrey, his friend from the River Hydraulics Group, slapped him on the back. "What'd ya think?" Bruce had been unable to talk about anything else for weeks.

Grant pointed in the air. "For a second I thought some of the pieces were going to hit us."

"Yeah.
Me too.
It was awesome!" Bruce pumped his arm in excitement. "And it was way louder than I thought it would be. Even with the earphones," he said, motioning to his ear.

Grant pointed down in the canyon. "I wish I could see
better
. There's too much dust to see how much of the structure . . ."

"Give it a few minutes to settle," Bruce said, motioning toward one of the hospitality tents and a table of drinks in ice. "Let's get a drink."

Grant nodded and they both headed towards the table. He wondered if events like this were his future. How many more dams would the Bureau demolish over the next ten years?

Grant had worked for the Bureau for eighteen years. He had joined the Bureau to build dams, big concrete ones like
and
. Their sheer size and power hypnotized him even after all these years as an engineer. As a child, he had toured Hoover Dam with his family while they vacationed in
. At the age of seven, while looking down the six hundred foot face, he had announced to his parents that he would build dams when he grew up. But unlike most children, Grant had not stopped with his childhood dream. Instead, he had let his passion propel him through college - first a bachelor's degree in civil engineering, then a master's, all focused on the chemistry of concrete, structural analysis, and ultimately, dam building.

When Grant first started working at the Bureau of Reclamation in the early eighties, he had advanced quickly, gaining recognition both for strategic decisions and common sense. He garnished awards and promotions. It was not until his career was set and he had worked for the Bureau for over ten years that he finally realized the truth. It came in the form of disapproval for a dam proposal he engineered for the
. It wasn't the disapproval that bothered him, because almost all his proposals had been denied. It was the lack of concern from his management at the Bureau. They had expected it to be refused.

The day the proposal was rejected, Grant's mentor Henry Petersen, who had helped design the Glen Canyon Dam in the late fifties, looked Grant in the eyes and said, "Face it, Grant, there ain't gonna be no more dams in America. It's over. It's not considered environmentally correct to build dams anymore."

It was at that moment that Grant's conscious mind grasped what his subconscious had known for years - he was too late.
's dams were already built. His dream would never be fulfilled. The Bureau of Reclamation had become a maintenance organization, content to monitor water usage. And, as the final straw, the Bureau was now decommissioning the dams it had built in the first part of the twentieth century.

When they reached the table, Bruce grabbed a cream soda and popped the top. "You all packed and ready to go?"