Read What a Bear Wants Online

What a Bear Wants 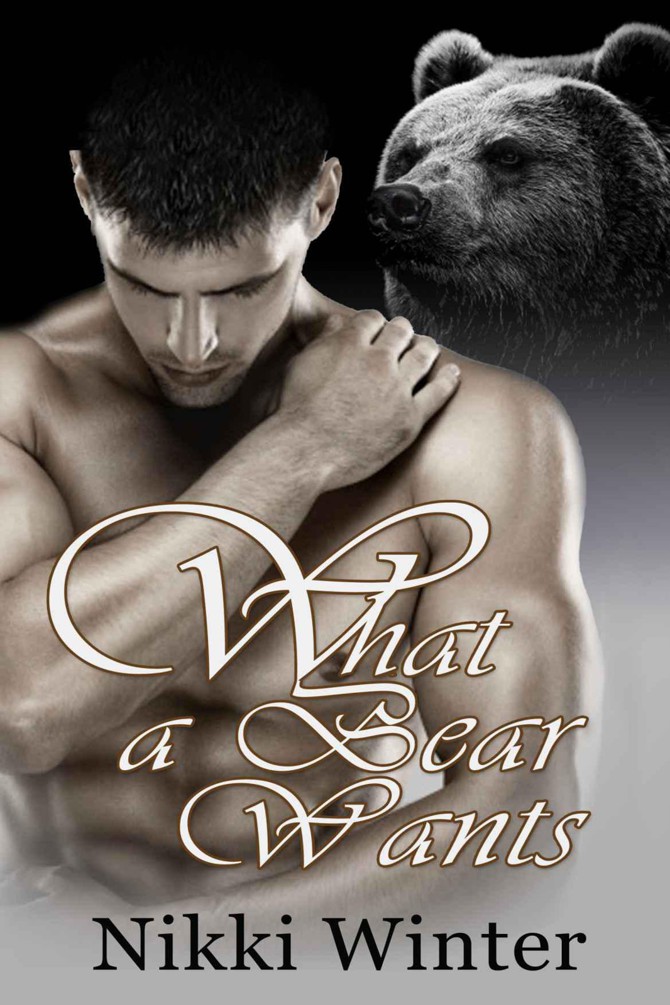 What a Bear Wants

This is a work of fiction. Names, characters, places, and incidents are products of the authors’ imaginations or are used fictitiously and are not to be construed as real. Any resemblance to actual events, locales, organizations, or persons, living or dead, is entirely coincidental.

All rights reserved. No part of this book may be used or reproduced electronically or in print without written permission, except in the case of brief quotations embodied in reviews.
Due to copyright laws you cannot trade, sell or give any e-books away.

This is a work of fiction and may contain descriptions of adult situations, explicit language, and scenarios. These stories are for adults only. Please keep this out of the hands of people under the age of 18 years old.

Other MMP Stories by Nikki Winter

One Shot Too Many

Under the Christmas Tree
with Drea Riley

Listen…I can’t even begin to express how many times I wanted to find a corner and gently rock myself to sleep while holding Mr. Monkey during the making of this story. Let me just tell you, that if it were not for baby Jesus, Billy and Janet, I would be in a psyche ward
right now.
I can’t say thank you enough, you two. You kept me on track when I started to have one of my moments of canine anxiety. Your bears are well deserved and I wouldn’t trust them in the dirty hands of anyone else
but
you…myself excluded. Friends, Romans, Country men…I hand you a tale from one shifter loving heart to another. I hope you find as much humor and joy in this story as I did.

WHAT A BEAR WANTS

Listen, I dunno if this is hard to comprehend because you’re slow to think and quick to act, because you spent too much time in the hash tents in the 70’s, because Satan clearly has a hold on your capabilities to rationalize and behave accordingly or because you’re simply one psychotic overgrown Rupert reject but read this clearly. I. Will. Not. Sell. Wilder. Lodge. To. You. Or to
anyone
for that matter. Got it? We clear? Are you understanding the words that are coming out of my proverbial mouth? Good. Great. Fucking awesome. Oh and the next time you want to send chocolates to someone who’s ass you’re attempting to kiss, evaluate the fact that said person is a canine. Good day Mr. McKenna.

Well wasn’t that blunt? And incredibly adorable? Ransom McKenna sat back in his office chair, a smile slowly curling his lips as his eyes traced the email from one cranky,
incredibly adorable,
she-wolf. He rather admired the fact that Ms. Wilder hadn’t gotten an assistant to do her dirty work. No, no, she told him to fuck off all on her own. What man in his right mind wouldn’t admire how eloquently she’d done it; managing to insult him, bring up a questionable past of drug usage
and
insinuate that he was in league with Lucifer. Most potential business conquests would’ve given him a generic—“
We’re not looking to sell at the moment but we do appreciate your interest. Should we so choose to in the future, we will contact you about your proposal.”
But it was quite clear to Ransom that he wasn’t dealing with most potential business conquests.

Fallon Wilder was more than a little different. Rather than continue to coast casually on the gift baskets, flowers, and subliminal messages he’d sent her, she’d cut to the chase; obviously tired of his not-so-subtle approach.
Cute. Really cute.

Most would tell him to be careful with her considering her reputation amongst the packs and prides. Apparently Fallon was what many called a cold, temperamental bitch who didn’t care about anything aside from her pack and her lodge
.
She didn’t date. She had no interest in mating and males who survived sex with her were generally too afraid to speak a word of it after.
It was quite clear to him that she was trying to perpetuate that very persona.

Yet, what Ms. Wilder didn’t realize was, Ransom didn’t care. Not in a malicious, cold-hearted way. It was in his nature not to. Grizzlies never paid much attention to anything if it didn’t involve mating, sleeping or prey. And like his father, his father before him, and the one before him, Ransom never released his prey. At least not until it stopped all that goddamn twitching and mewling. From his very first hunt Ransom learned an essential lesson—guard your balls and go for the jugular.

He had no interest in damaging Fallon’s throat, he simply wanted the beautiful land she’d dug her paws into and refused to release...like a dog with a bone. Wilder Lodge had caught Ransom’s hard to gain attention just a few short months ago when it was featured as one of the top ten getaways in the world—more specifically the
shifter
world—above one of his own in a popular magazines. Shifters were a hard group to please, even harder to get a compliment out of, so the fact that she’d managed to not only gain a spot on the list but take
Ransom’s
in the process made him take notice.

Well that and the picture of her beside the article. If he were being honest her face was truly the first thing to give him pause. Fallon Wilder wasn’t a fashion model by any means and every fiber of Ransom’s being was drawn to her because of that small fact alone. After googling as many images of the elusive she-wolf as he could find his inherent curiosity had finally been satisfied. No, Fallon wasn’t a supermodel but she was no less beautiful than any woman gracing one of the billboards or covers that he regularly saw.

He couldn’t guess her exact size but she had to be at least six feet tall with a build that was more than a bit athletic yet noticeably feminine with heavy breasts, a toned waist and well-curved hips. Her face was sweet, innocent almost. Wide, doe-brown eyes, a button-like nose and a full sinful mouth pulled her high cheekbones and clefted chin, all covered in a semi-sweet chocolate tone, together. Her features were perfectly symmetrical which Ransom found interesting because he’d read once that in both nature and the human world of aesthetics, symmetry was what drew one being to another. But he knew that symmetry had nothing to do with what he wanted from Fallon. It was the glint in her eyes and the shape of her lips as they bowed into a faint smile for the photographer who had taken the picture for the article.

That look was purely predatory. A challenge almost, to both the beast and businessman that resided inside him. A challenge that Ransom was willing to accept. He’d been managing the real estate branch of the McKenna Sleuth since he’d graduated with an MBA and had gotten licensed in at least seven different states. Ten years later and thus far his sleuth owned twenty different resorts worldwide, several hotels and more than a few rental properties because of him. He wanted to add Wilder Lodge to that list. And possibly add Fallon to his very large, very sturdy bed.

The thing of it was, she was clearly a bit testy when it came to the subject of selling. If he remembered correctly, that land had been in her family for a very long time. The sleuth member in him could respect that, but the real estate tycoon...not so much. He wanted that property. And he wasn’t too inclined to give up his prey without a fight. If he had to bat his opponents around until they simply lay there, shuddering and panting, waiting for him to either finish them off or get bored and leave, then so be it. And no, he didn’t think that qualified him as clinically insane.

Ransom sat and scanned that email again, then without hesitation, he wrote a response...

subject:    Re: STOP YOU PUSHY BASTARD

There are a few quick facts that I believe you should know about me Ms. Wilder. Firstly and most apparent, I’m. A. Bear. Which means everything you just typed with your cutesie, wittle paws is completely irrelevant to me. But because I’m bored and I feel the need to entertain myself, I shall address all your comments in order. I’m slow to move because I lumber, so that completely rules out your “
quick to act”
theory. Grizzlies aren’t big on the quick movements unless it means we eat faster. Because honestly, food takes up a disturbingly large portion of our brainpower. I have no idea how old
you
think I am but I was never old enough to be in a hash tent in the 70’s. The 80’s are a different story...don’t judge. This is a no judgement zone. By the way...how old are
you?
No, no, don’t get offended. I’m sure you carry it well. You should be aware that Satan and I could never get along so we went our separate ways years ago. It was for the best. Don’t cry for us. I appreciate you mentioning Rupert. It brought back memories of the days where I could roll around and grab my toes without someone being concerned enough to call my
special
doctor. And I don’t consider myself overgrown. Like the mighty men of the McKenna dynasty from a land way before time, I, happen to think of myself as well proportioned. Do with that last fact what you will. If you think I’m giving up on Wilder land that easily, you my cutesie wittle pup, are in for such a rude awakening.  Oh and if you prefer I send you something else in place of the chocolates...such as Bambi’s mother on a platter...I can always do that...