Read What a Dragon Should Know Online

What a Dragon Should Know 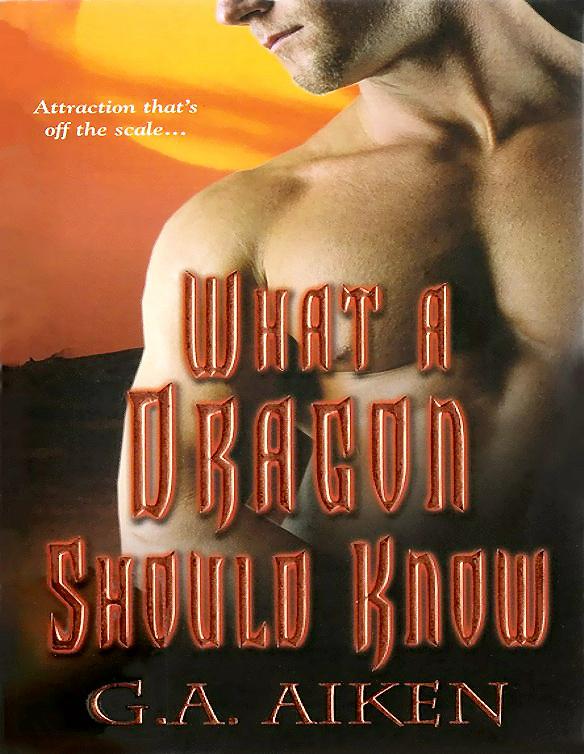 SEE WHAT HAPPENS
WHEN YOU LISTEN TO ME?

“Only good things.” He smiled at her. “Now, are you going to thank me properly?”

“I said ‘thank you.’ That’s considered in some cultures as thanking you properly.”

“I was hoping for a little more than that.”

She studied him for a long moment before she nodded.

“All right.” She scooted down a bit on the bed, pulled her gown up high on her thighs, and relaxed back into the mattress. “If you could make it quick before the food gets here, that would be great.”

Gwenvael felt a small twitch beneath his eye. He often got something similar right on his eyelid but only when he had to deal with his father. Apparently a new one had developed that belonged only to Lady Dagmar. “That’s not what I meant.”

“That’s always what men mean when they ask to be thanked properly.”

“Your world frightens me. I want us to be clear on that.” He leaned over and grabbed her waist, lifting her until her back again rested on the propped-up pillows.

“I’m unclear as to what you want, then.”

“A kiss,” he said, pulling her dress back down to her ankles. “A simple kiss.”

To Kate Duffy. You have always been brave enough to let me off the leash—even when you had no idea where I might be headed or what I might maul along the way—and for that I am truly grateful.

To Doug Lindquist. Although you are gone, your guidance, encouragement, and suggestions to “slow down, breathe, and stop panicking” still help me every time I sit down to write. You are very much missed, my friend, but you and your words are forever with me. Thank you, Doug—for everything.

But I can’t say that it was easy writing Gwenvael the Handsome’s story because I knew he needed a heroine who could do much more than challenge him in the bedroom. To keep a more than two-hundred-year-old dragon entertained for another six hundred years when most of that dragon’s days were spent plotting and planning “shenanigans” and “hijinks,” I needed a heroine who absolutely
lived
for “shenanigans” and “hijinks.” And that heroine is Dagmar Reinholdt, The Beast of the Northlands.

And although it may not have been easy writing this book, it was fun. How could it not be, with two scheming troublemakers at the helm?

Also, even though my books can be read as stand-alones, in the world of dragon politics there are often quite a few players, so I want to suggest you read Fearghus’s book,
Dragon Actually,
and Briec’s story,
About a Dragon,
to get yourself up to speed on the Dragon Kin.

Now, after that brief aside, I invite you to enter the world of my Dragon Kin—where the dragons are much saner than the humans surrounding them could ever hope to be.

But this day, Gwenvael ran from his own kin. Not that this was in any way new to him either, but it had been a while since he’d been forced to.

Also true was that he should have kept his mouth shut. Yet it had been a legitimate question. As always, though, his kin blew everything out of proportion and took out their misplaced rage on him.

Why did they just not admit they were jealous? For he was Gwenvael the Handsome. Third-born son and fourth-born offspring of the Dragon Queen, Former Captain of the Dragon Queen’s Northern Armies, and most-loved male throughout the Dark Plain regions, Gwenvael was always magnificent, magnanimous, and loving.

And his kin hated him because of that.

Besides, who knew that a queen would be so sensitive? Even a human one.

All he did was ask a simple question—“Are you supposed to be that large at only seven months with child?” A simple question that led to tears, unattractive snorting noises, and thrown weaponry. It seemed the human queen may have lost her ability to run quickly, but her throwing arm was still true.
Nearly took my damn ear off.

Now the queen’s consort—also known as Gwenvael’s eldest brother and future Dragon King of the Southlands, Fearghus—felt the need to chase him down like a rabbit.

That’s why Gwenvael ran. Because if Fearghus the Destroyer
destroyed
Gwenvael’s beautiful face, the big bastard would never face retribution for it. Because, as always, he’d be forgiven his violent transgressions while Gwenvael was never forgiven his more sensual ones.

Fearghus, however, had hacked off the tip of Gwenvael’s poor tail more than a century ago and still he had not been punished. While the spiked tip most dragons used as a weapon floated in a river somewhere, Gwenvael dragged around a stump.

Thankfully, he’d found other uses for his tragically lame, disfigured tail. Uses most females appreciated quite a lot.

Gwenvael dashed around a corner, heading toward the stables and out the back entrance. It was then he saw sweet Izzy, daughter of the delicious Talaith and Gwenvael’s idiot brother Briec.

Izzy was not Gwenvael’s niece by blood, her true father a Southland human who’d died many years ago in battle before Talaith and Briec had ever met or mated. But Izzy was still family and he adored her as she adored him. Or, at least that was what he thought until she slammed into him as he charged by, sending Gwenvael flying into one of the stable doors. He kept forgetting exactly how strong his human niece was. Her mother may be a small dainty witch trained to kill on command, but Izzy was a bit of a bruiser—and enjoyed that about herself immensely.

Izzy stood over him and yelled out, “Got him!”

“Iseabail!” he cried, devastated. “My love! My adoring niece! How could you?”

“You shouldn’t have hurt her feelings! It was mean.” She shook her finger at him. “Don’t be mean!”

Izzy. Sweet, beautiful, but eternally strange Izzy. Her loyalty to the queen was never to be questioned. Even now she trained with the troops daily, hoping to be sent off to war so she could prove her loyalty with blood. Why anyone felt the need to do that was beyond Gwenvael. He didn’t like to bleed or be harmed in any way. He liked all his bits and pieces exactly where they were and in the correct working order. As he was forced to tell his father more than once, “I said I’d fight for my mother’s throne. I never said I’d die for it.” Then he’d add, simply to annoy the old bastard into one of his frothy temper tantrums, “Don’t you think I’m too pretty to die?”

“I thought you loved me!” Gwenvael yelled at Izzy.

“Not when you’re mean!” Her goodness was so sincere that the thought of fireballing her from his existence for this betrayal only went through his mind once … maybe twice.

Big, abusive hands grabbed Gwenvael by the hair and proceeded to drag him away from the stables.

“I have nothing to apologize for.”

To prove he disagreed on that point, Fearghus stopped long enough so that he could stomp his big foot against Gwenvael’s stomach.

“You made her cry. No one makes her cry.”

They were going through the Great Hall of the Garbhán Isle castle now. At one time this had been a place of horror, the seat of power for Lorcan the Butcher. Now it belonged to the woman who was Lorcan’s bastard sister and the one who’d taken his head.

“I can walk on my own,” he told Fearghus when he realized the whiny lizard had no intention of stopping any time soon. And although Gwenvael could shift to his natural—and exquisite—dragon form in his bid to get away, he’d only unnecessarily harm the humans who lived here. Something he was loath to do. He liked humans … Well, he liked female humans. The males he could do with or without.

“I’m not chasing you anymore,” Fearghus said while dragging Gwenvael up those hard stone stairs. When Gwenvael began to kick and try to yank himself away from Fearghus’s grasp there was second-oldest Briec grabbing his legs and assisting Fearghus.

“We’re going to take him to Annwyl.”

“Won’t our mother notice if he no longer has his head?”

Now in front of the queen’s bedchamber, Fearghus kicked the door open and, together with Briec, tossed poor Gwenvael into the room. The door slammed shut, and Gwenvael realized that his brothers had left him to the tender mercies of the Queen of Dark Plains. Also referred to as the Blood Queen of Dark Plains, the Taker of Heads, the Mad Bitch of Garbhán Isle, and the much pithier Annwyl the Bloody. For some reason the human queen was known to have a wee bit of a temper.

Steeling himself, Gwenvael looked up at fair Queen Annwyl and said, “My lovely and sweet Annwyl. My soul aches for you. My heart pines for you. Tell me you’ll forgive me for my hasty, foolish words and that our love will never diminish.”

She stared at him a long moment and then, to Gwenvael’s ultimate horror, burst into more tears.

He knew then he’d never forgive his brothers for this.

They called her The Beast of Reinholdt. Or The Beast, for short.

She didn’t appreciate it, especially since her name was actually Dagmar, but she tolerated it. In her world there were worse things than being given a name she didn’t think she deserved.

All right … perhaps she deserved the name a
little.

Closing her book, Dagmar sighed. She knew she couldn’t spend all day in her room hiding, no matter how much she wanted to. She knew she had to face her father and tell him what she’d done. The fact that she’d done it for the good of her father’s territory and his people would mean little to The Reinholdt, the mightiest warlord in the Northlands. But she’d learned to ignore her father’s “moments,” as she liked to call them, early on in life if the end result meant getting what she wanted.

Placing the book aside, she stood and donned one of her grey wool dresses. She tugged it into place and then wrapped a plain leather girdle around her hips. She slid the small dagger she used for menial cutting into the girdle and then tied a grey kerchief around her head, her long braid reaching down her back.

Looking for Mrs Dextrose by Nick Griffiths
Shadows in the Cave by Caleb Fox
Cracked Dreams by Michael Daniel Baptiste
Midwife of the Blue Ridge by Christine Blevins
Take It Off by J. Minter
Sharecropping The Apocalypse: A Prepper is Cast Adrift by Ron Foster
This I Promise You by Smith, Maureen
The Boy Who Could Change the World by Aaron Swartz
Flat Lake in Winter by Joseph T. Klempner
The Wounded (The Woodlands Series) by Taylor, Lauren Nicolle
Our partner