Read What It Takes Online 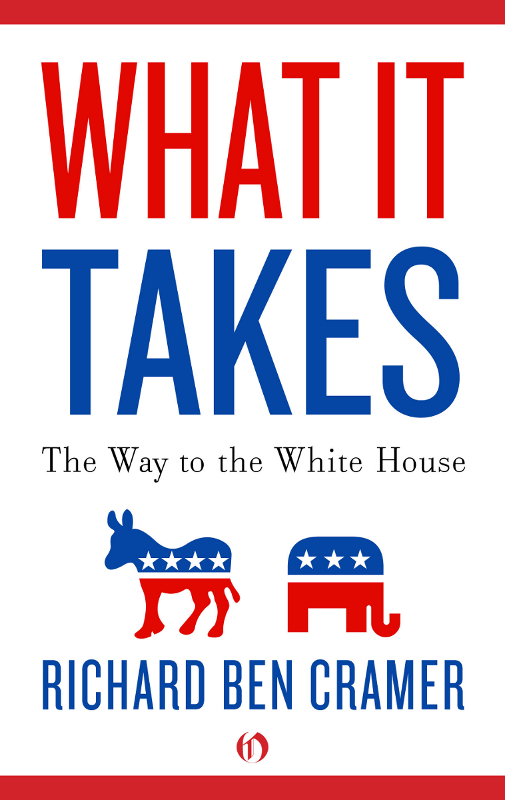 1 The Price of Being Poppy

10 Right from the Start

17 The Night of the Bronco

18 They Expect to Be Cold

25 The Tinsel and the Tree

32 Bill and Gary and Lynn and Donna

41 The River of Power

43 The Age of Dukakis

47 A Platform upon Which to Stand

50 The Badge of the Big Gee

59 The Cavalcade of Stars

66 That Is the Process

70 Happy to Be Alive

74 Wilting from the Heat

79 One of the Great Sins

81 It All Began in Russell!

93 Serious About the Business

94 Out of the Monkey Suit

95 Who Would Have Thought?

123 The Priesthood Is Obeyed

N
ONE OF MY FRIENDS
ever thought he should be President—much less that he could be. Of course, we were all taught that it was possible (in America, God bless her). But our lives separated us from that notion by the time we left our teens. A President—
the
President—was someone altogether larger, and more extraordinary, than we. Though we might like or revile him, though we could judge him (and even send him packing) by and by ... though a million words were written each day on his policies and politics, though millions of people might listen to his speeches, or watch a TV tour of his house ... though his face and his voice, his wife, kids, and dog would be known to every sentient adult, though his name (or initials) would conjure up a time of our lives—for the rest of our lives ... still, I came of age knowing, somehow, the life of this figure must be something so foreign to mine as to render it, finally, unknowable.

Later, as a citizen and newspaperman, I learned what I could about the candidates and campaigns, and the Presidents they produced. I read a mountain of newspapers along the way, probably did irremediable damage to my eyes and brain, staring at TVs. When the campaigns were over I read books about them. I learned about the polls and ad campaigns, people-meters, direct-mail fund-raising, computer-targeted media buys, and all kinds of arcane wizardry that left unanswered the only questions that I (and, I think, most voters) ever wanted to ask:

Who are these guys?

I still did not know what kind of life would lead a man (in my lifetime, all have been men) to think he
ought
to be President. I could only guess at the habit of triumph that would make him conclude he
could
be President.

What in their backgrounds could give them that huge ambition, that kind of motor, that will and discipline, that faith in themselves? What kind of faith would cause, say, a dozen of these habitual winners to bend their lives and the lives of those dear to them to one hugely public roll of the dice in which all but one would fail?

What I wanted, what I could not find, was an account I could understand of how people like us—with dreams and doubts, great talents and ordinary frailties—get to be people like them. I wanted to know not about the campaign, but about the campaigners. Lastly—most important—I wanted to know enough about these people to
see
... once they decided to run, and marched (or slid, or flung themselves headlong) into this semi-rational, all-consuming quest ... what happened to those lives, to their wives, to their families, to the lives they shared? What happened to their idea of themselves? What did
we do to them
, on the way to the White House?

I meant to find a half-dozen candidates in whose lives I would see my answers. I thought to pick half Republicans and half Democrats, but as a reporter (not a political expert, nor certainly a political scientist), I had to let the story pick my subjects. So the finding was a matter of much trial and error. In the end, I chose two Republicans, Vice President George Bush and the Senate’s Republican Leader, Bob Dole; and four Democrats, former Senator Gary Hart of Colorado, Congressman Dick Gephardt of Missouri, Senator Joe Biden of Delaware, and Massachusetts Governor Michael Dukakis.

The final criterion for this choice developed in the course of reporting: I wanted the candidates who made that final turn in the road, who got to the point where they could say, “Not only should I be President
... I am going to be President
.” At that point, their idea of their own lives would change—had to change. They had to see in themselves a figure of size to bestride a chunk of history. And by the nature of the process, alas, five of the six would then have to come off of that; they would be thrown back on themselves, as they probably never were before, to examine how it was they saw so wrongly. The sixth, God help him, would be thrown back on himself in an even more fundamental way—he would have then to become the President he saw in himself. This is the drama I proposed to follow.

By its nature, then, the project had to exclude some credible and charming candidates, whose lives I dipped into but, ultimately, could not follow. The omission I most regret is Jesse Jackson, whose story is surely as fascinating as that of any man who has campaigned for the White House. Alas, I came to Reverend Jackson late, and I was never able to slow him down long enough to make him understand that help was required. We never got to the level of candor that was essential, and so, in the end, it seemed better not to write about someone I did not know well.

With the others, I have tried to tell their stories in two ways—as fairly as I could from the outside, and as empathetically as I could from behind their eyes. In doing so, I have tried not only to show
them,
but to show what our politics is like—what it
feels
like to run for President; what it requires from them; what it builds in them; what it strips, or rips, from them. The book begins with the lives of the two older men, the Republicans, Bush and Dole, and expands in Book II to include the four Democrats. By Book III, the stage is set, the race begins in earnest. The lives come together in one flooding tumble. The Epilogue tries to sketch the lives as they emerged from those rapids, to see what changes were wrought.

I would like to make note here of my reporting techniques. The narratives are based on interviews with more than a thousand people. Every scene in the book has come from firsthand sources, or from published sources that were verified by participants before my writing began. The narratives were re-checked for accuracy after the final words were written. Where dialogue is quoted, the quotes have come from a person involved in the conversation, usually the person making the statement. In most cases, the quotes have been read back word for word to the sources involved, to check them once again for accuracy and fairness. In every case, thoughts attributed to the characters in this book have been checked with them, or with the people to whom they confided those thoughts. Every section of this book has been read back to the candidate, to a family member, or to closest aides—whoever seemed likeliest to know about the events described, and who would give the time. Some family members and aides to these candidates have helped me, literally, fifty or sixty times. They know almost as much about this book as I do, and I will always be indebted to them for the time they gave, for the trust they reposed in me, for their patience with my urgencies, and the kindness with which they treated me.

A project of this size must progress with many hands on its back, and there are some who deserve more thanks than I can ever give. No author can have had better support from a publisher than I have had from Random House, especially from my editor, David Rosenthal, whose strength and intelligence helped propel this project from the first; and I have benefited from the counsel of his colleagues, Peter Osnos, Jason Epstein, Joe Fox, and boss of all, Harry Evans. So outrageously long has this project run, that I have also these chiefs to thank for support that was crucial in each case: Joni Evans assisted in shaping the labor to a book, and Howard Kaminsky gave the project its start. I also want to thank Julie Grau, Jennifer Ash, and Rebecca Beuchler for their help and good cheer; Ed Cohen and Amy Edelman for their careful treatment of the manuscript; Martha Levin, Dona Chernoff, Wanda Chappell, Mitchell Ivers, and Eve Adams for their counsel and their efforts to turn the great wheel of the mill.