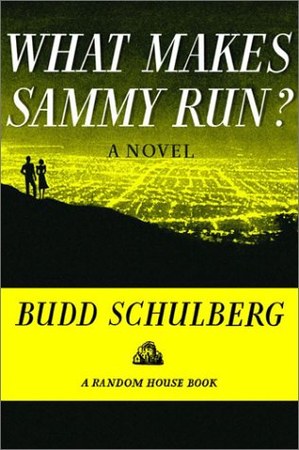 Budd Schulberg’s career as a novelist began with the meteoric success of
What Makes Sammy Run?
Among his other novels are
Waterfront, The Harder They Fall, Sanctuary V
, and
The Disenchanted
, which Anthony Burgess included in his
New York Times
list of “The Ninety-nine Best Novels of the Twentieth Century.”

Schulberg won an Oscar for his screenplay
On the Waterfront
, several awards for his film A
Face in the Crowd
, and a Tony nomination for his Broadway adaptation of
The Disenchanted
. He attributes his ability to adapt his own work to stage or screen to his upbringing in Hollywood, where his father ran a major motion-picture studio.

After publishing a new collection of short stories,
Love, Action, Laughter and Other Sad Tales
(Random House, 1991), Schulberg completed a screenplay of
What Makes Sammy Run?
for Warner Brothers, following the Random House publication of the anniversary edition of his celebrated novel.

What Makes Sammy Run?
The Harder They Fall
The Disenchanted
Waterfront
Some Faces in the Crowd
Sanctuary V
Everything That Moves
Love, Action, Laughter and Other Sad Tales

From the Ashes—Voices of Watts
(edited, with an introduction)

All rights reserved under International and Pan-American Copyright Conventions. Published in the United States by Vintage Books, a division of Random House, Inc., New York, and simultaneously in Canada by Random House of Canada Limited, Toronto.

For Saxe Commins, the “Max Perkins” of
Random House, devoted midwife to the birth
of this book and the first to predict for it a
future that a neophyte novelist thought
uncharacteristically extravagant
.

And for my children and grandchildren
across the generations
,

INTRODUCTION
TO THE MODERN LIBRARY EDITION

The choice of
What Makes Sammy Run?
for the Modern Library, giving it the prestige of “a modern classic,” was a milestone in the life of the novel, and prompted the following Introduction:

In the spring of 1941, when my first novel was published, I did not expect it to have much of a sale. While expressing a good deal of personal enthusiasm for it, my publishers warned me that works of fiction concerned with Hollywood were notoriously poor sellers. So I simply hoped that a few thousand readers would appreciate it for an honest and serious effort to throw some light on one of the less glamorous but not insignificant phases of Hollywood life.

Consequently—even after John O’Hara, a friend in need and in deed in those days, had tried to warn me—I was almost totally unprepared for the reaction to my book. Whatever else it was, it was not mild. People were, in several senses, wild about
Sammy
. Some hailed it as a long-awaited expedition into darkest Hollywood.
I found myself acclaimed for honesty, insight, courage. Lest this sound faintly megalomaniacal, I hasten to add that people also hated my book. Some said it was the most disgraceful, vulgar, callow novel they had ever read. They attacked it not only as a slander on Hollywood, but on the human race, and I found myself denounced as a sensationalist, a falsifier and even (since we were still living in the afterglow of the finger-pointing thirties) a Fascist! There was something about the book that evoked nothing but lavish praise, violent condemnation and incessant controversy. Only one journal, however, managed to reflect both sides.
The Daily Worker
first hailed the book as a masterpiece of social realism, and then, just one week later, faced about to lambast it as a bourgeois canard on Hollywood’s “progressive forces.”

The complaint of most novelists is that their literary firstborns suffer inattention and cruel neglect. If I had any complaint, it was that Sammy suffered just the opposite. Overnight the novel which I had hoped might please a few thoughtful readers had become a
succès de scandale
. Sammy, to push my French vocabulary to the wall, was a
cause célèbre
. Damon Runyon welcomed him into the inner circle of all-time all-American heels. The title became a punch line for radio comics and tabloid captions. Winchell revealed to a breathless nation “the true identity of Sammy Glick.” Next day the Hollywood producer who had been positively identified as my model passed my table in a restaurant and pointedly looked the other way. Meanwhile at least three other Hollywood producers had been similarly and just as positively identified. My favorite Hollywood pubs suddenly were full of people who would corner me with an inevitable “No kidding, I won’t tell a soul, but isn’t Sammy really ——?”

In vain I heard myself repeating, like a record revolving in a worn groove, that Sammy was composed in the manner of all fictional characters, out of the writer’s recognition of similar and overlapping traits in various individuals who have passed within his circle of observation. Believing frontispiece disclaimers to be empty gestures, I omitted the old wheeze that “any resemblance is purely coincidental.” If you wanted to think that Sammy Glick
was your boss or your nemesis or yourself, that was for you. As Somerset Maugham had written, in behalf of all the writers accused of literary assault and battery, “No author can create a character out of nothing. He must have a model to give him a starting point.” I had no lack of models when I first began sketching Sammy for a series of short stories in 1937. Fresh from college, and inclined to talk too much for a writer anyway, I happened to give a quasi-friend and quasi-screen writer a literal answer to his casual cocktail-party question “What’re you working on?” In my innocence I described a little film story I was blocking out. A few days later I had the good fortune to read in a movie column of the sale of my little idea, credited to the fast-moving passerby who had seemed to be listening so sympathetically. I say good fortune, for this mishap launched me both on a hobby and a career. When I complained of my misadventure to fellow scenarists, they shrugged it off with the observation that my wound was a mere scratch compared to any number they had suffered. I began to wonder if every scrupulous screen writer didn’t have a Sammy in his life.

I put down everything I heard about the credit hounds, the shoplifters who had learned how to loiter around the idea counter. Notes on at least two dozen quicksters went into my workbook. That’s why I can never honestly affirm or deny when I’m asked, “Wasn’t it really Willie Blank?” It was and it wasn’t. What I had, when I read through my notebook, was not a single person but a pattern of behavior. The job was—as the job of writing always is—to recognize that pattern, to humanize it and then to try and understand it.

Another kind of reader Sammy was apt to hear from was the fellow who said, “Of course we know that Hollywood has its Sammy Glicks. But why must you write about them? After all, we also have plenty of decent, generous and gifted people. Why don’t you write about
them?”
If you think of the novel as a kind of literary census-taking, with so many chapters devoted to so many “decent” people and so many words to so many heels, they are right, of course. There were French philistines, passing as literary
critics, who protested against Flaubert, “Why does he devote a whole book to a selfish, willful, immoral, hysterical woman like Madame Bovary? Do we not have fine, upstanding, respectable women in the provinces more worthy of immortality?” Not by the widest stretch of vanity am I presuming to have written a
Bovary
or to shine in the reflected brilliance of the French master. But the crime of which he was accused—indeed for which he had to stand trial before a court of justice!—raises a similar question of literary morality. And not only is Flaubert’s answer my answer, but that of every serious writer from Defoe to Faulkner: I committed this character to public attention because I found significance in him (or her). Such heroes and heroines of negativism as Julian Sorel, Emma Bovary, George Babbitt, Julian English and Sammy Glick are symptoms that warn of some malaise in their society. I tried to suggest Sammy’s as “a way of life that was paying dividends in the first half of the twentieth century.” It would be comforting to believe that the inverted morality of the book is outdated. I am frequently asked, “Are there still Sammys in Hollywood?” And the answer must be “Of course,” though such naked aggression as I have treated may be hopefully on the wane. But the Sammy-drive is still to be found everywhere in America, in every field of endeavor and among every racial group. It will survive as long as money and prestige and power are ends in themselves, running wild, unharnessed from usefulness.

An extra-literary criticism that
Sammy
has had to face—and which I would like to head into directly here—is that of anti-Semitism. An odd axis of reactionary hush-hushers and propaganda-minded Communist litterateurs raised quite a hue and cry along this line. I said at the time—and even the genocidal forties has not altered my opinion—that I despised anti-Semitism not because I happen to be Jewish myself but because I have always opposed Neanderthalism in any form. I hate it when a Negro is barred from his rightful place in a state university. I hate it when an American of Jewish ancestry is turned away from a hotel or, more important, from a job with some great national firm. I hate it when Russian writers of high talent like Babel or Pilnyak,
Zoschenko or Pasternak are silenced or obliterated for the crime of writing their own themes in their own way. Social cruelty and stupidity, for whatever reason and whatever ends, is Neanderthal-ism. I would be unhappy about any writing of mine that contributed to it in the slightest degree. But I did not feel guilty of this, even when my book was published in the crucial year of 1941, and if I thought so today, after the hardest kind of thinking on the subject, I would not consent to its reappearance. It is true that the principal character in this book is about as unpalatable a character as ever came down the pike. It is also true that I have made this Sammy Click a Jew. But as Dorothy Parker said in her review, “Those who hail us Jews as brothers must allow us to have our villains, the same, alas, as any other race.” The attack on Richard Wright’s hero-villain-victim Bigger Thomas in
Native Son
was strikingly parallel. In defending both his book and mine against the charge that we had played into the hands of racists by making a member of a minority group something less than a knight in shining armor, I wrote, “I believe that for any single reader (of
Native Son
) who came away with a feeling of revulsion for the Negro race, ten closed the book with a deepened understanding of the conditions, the processes that turn a Bigger Thomas from a strong, ambitious, socially useful human being into a hunted animal that kills and hides … I planned and hoped that my book would have a similar effect.” While admitting the fear that bigots might be able to turn my book against my own people and the democratic ideal, I said this could only be done “by wrenching characters out of their cultural sockets and paragraphs out of their continuity.”