Read What Once Was Lost Online

What Once Was Lost 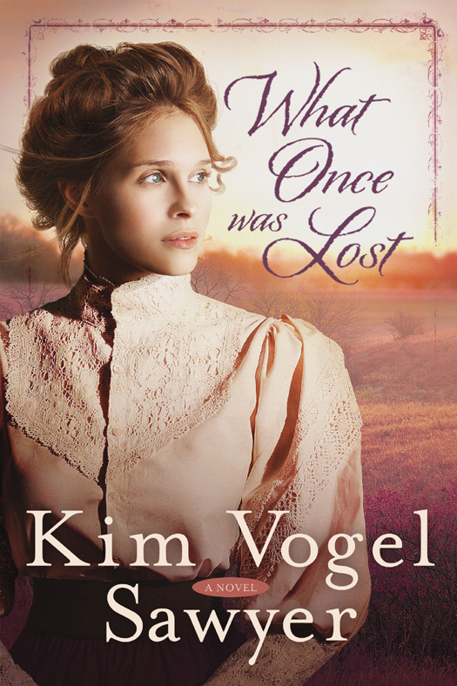 Praise for
What Once Was Lost

“Kim Vogel Sawyer weaves love, coming of age, and prevailing against the odds into a heartwarming and gripping tale.
What Once Was Lost
will have you invested in the lives of each of these wonderful characters as they struggle to deal with the scars from their pasts.”

“Known for her gentle stories of hope, Kim Sawyer drew me in at once with her colorful cast of characters and authentic historical voice. Just as the fingers of the young blind boy, Tommy, deftly weave reeds into chair seats, so Kim Sawyer weaves words into a story filled with compassion, intrigue, and romance. The twists will keep readers turning the pages, but the resolution of
What Once Was Lost
will leave them cheering. Heartfelt and satisfying to the very last page!”

“Award-winning author Sawyer continues to craft engaging historical love stories brimming with characters who are bold in their faith.”

“Sawyer treats readers to love stories that speak to the heart.”

“Winsome characters, an interesting premise, and a heavenly match made on earth … fans of inspirational romance novels will not be disappointed.”

“Yet another entertaining novel that compels one page to turn as quickly as the one before.”

WHAT ONCE WAS LOST

All Scripture quotations are taken from the King James Version.

Published in the United States by WaterBrook Multnomah, an imprint of the Crown Publishing Group, a division of Random House Inc., New York.

WATERBROOK and its deer colophon are registered trademarks of Random House Inc.

What once was lost / Kim Vogel Sawyer.— First Edition.

Excerpt from
Echoes of Mercy

A man’s heart deviseth his way:
but the LORD directeth his steps.

“Amen.” Her prayer complete, Christina Willems raised her head. Even after a full year of leading the residents of the poor farm in saying grace, she gave a little start as her gaze fell on Papa’s empty chair at the far end of the table. Loneliness smote her, as familiar as the smooth maple tabletop beneath her folded hands. Would she ever adjust to her dear father’s absence?

To cover the rush of melancholy, she reached for the closest serving bowl, which was heaped with snowy mashed potatoes, and forced a smile. “Herman, would you please carve the goose? Louisa did such a beautiful job roasting it. I’m eager to see if it tastes as good as it looks.”

Louisa McLain, one of the two widowed sisters-in-law who had lived beneath the poor farm’s roof for the past four years, tittered at Christina’s compliment. “Now, Christina, you know roasting a goose is a simple task. But bringing one down so we can all enjoy such a treat? We owe Wes our thanks for his skill with a shotgun.”

Wes Duncan’s wide, boyish face blushed scarlet, and he ducked his head but not before he flashed Louisa a shy grin.

Herman Schwartz took the carving knife and fork and rose slowly, his arthritic joints unfolding by increments. Light from the brass gas lamp hanging above the table flashed on the knife’s blade as he pressed it to the goose’s crispy skin. While Herman carved, the others began passing around the bowls of potatoes, gravy, and home-canned vegetables grown in their own garden.

Young Francis Deaton watched Herman’s progress with unblinking eyes, licking his lips in anticipation. He nudged his sister, Laura, with his elbow. “Lookit that, Laura. Finally get somethin’ ’sides pork for supper! Ain’t it gonna be good?”

His mother set down the bowl of boiled carrots and gave the back of Francis’s head a light whack. Francis yelped and rubbed the spot as Alice shook her finger in her son’s face. “Shame on you. We should be thankful for every bit of food the good Lord sees fit to give us, whether it be goose, pork, or gruel. Now apologize to Miss Willems for complaining.”

Christina accepted the boy’s apology with a nod and a smile. She well understood Francis’s delight in the succulent goose. The poor farm residents consumed a steady diet of pork because pigs were the most economical animals to raise and butcher. They hadn’t enjoyed a meal such as this in months—not since she’d evicted a ne’er-do-well named Hamilton Dresden for trying to sneak into Alice’s room one night. The man had been lazy, shirking jobs rather than contributing to the poor farm’s subsistence, but he’d been handy with a rifle, and their table had benefited from his good aim. Yet she didn’t regret sending him packing. She’d rather eat beans and bacon seven days a week and feel that her charges were safe than enjoy wild game and have to worry about illicit shenanigans.

Their plates full, everyone picked up their forks and partook of the feast. While they ate, easy conversation floated around the table, covering the whine of a cold wind outside. It sounded as if a storm was brewing, but Christina had no concerns. The sturdy limestone construction of the towering three-story house could withstand Kansas wind, rain, hail, and snow. How she loved this house and the security it provided her and the needy individuals who resided beneath the roof of the Brambleville Asylum for the Poor. And what a unique group of needy now filled the chairs.

Louisa assisted Tommy Kilgore, the little blind boy who’d been deposited on the poor farm steps two years ago, and her sister-in-law, Rose, saw to the
seven-year-old orphaned twins, Joe and Florie Alexander. Their newest arrival, a quiet young woman named Cora Jennings, who claimed her mother had cast her out, slipped from her chair and circled the table, refilling coffee cups.

On the opposite side of the long table, Wes helped himself to a second serving of corn and then ladled more gravy on Harriet Schwartz’s plate. Observing the simple-minded man’s solicitude for the elderly woman, Christina couldn’t help but smile. Then she swallowed a chuckle when Francis stole a piece of meat from his sister’s plate, earning a reprimand from his mother.

Christina held her fork idle beside her plate and simply basked in the feeling of family represented by this ragtag assortment of discarded humanity. Love swelled in her breast for every one of the people sharing her table, from chubby little Joe to gray-headed Herman.
Oh, Father …
A prayer formed effortlessly within her heart.
Thank You that even though Mama and Papa are with You now instead of with me, I am not alone. I will always have my residents who bring me such joy and fulfillment
.

“Miss Willems?” Wes’s voice pulled Christina from her reflections. “Ain’t there no bread? Need it to soak up my gravy.”

Christina gave a rueful shake of her head. “No. We used the last of it at lunch. But don’t worry. I mixed dough this afternoon, and before I retire this evening, I’ll bake enough loaves to carry us through the coming week. We’ll have bread with every meal tomorrow.”

Rose turned her pert gaze in Christina’s direction. “Would you like my help with the bread baking?”

The residents shared the operations of the poor farm to the extent their age and abilities allowed. Despite Rose’s perky tone, her shoulders drooped with tiredness from dusting furniture and mopping the oak floors of the rambling house that afternoon. Christina squeezed the older woman’s hand. “Bless you for your willingness, but I’ll see to the bread making myself. And I’ll see to the supper cleanup, as well.” A soft mutter of protests rose, but Christina waved her hands and stilled the voices. “No, no, you’ve all done more than enough work today.”

The others returned to eating with no further arguments. Satisfied, Christina pressed her fork into the mound of potatoes on her plate. Ultimately, the Brambleville Asylum for the Poor was her responsibility, just as it had once been her father’s. She would honor his memory by meeting the needs of her charges as well as Papa had.

Heart of the King by Bruce Blake
The Sacred Combe by Thomas Maloney
The Day Of Second Chances by Julie Cohen
Lure of the Wicked by Cooper, Karina
Mate Of A Dragon Villain (Skeleton Key) by Mandy Rosko, Skeleton Key
The Peddler by Prather, Richard S
Poppy: Bride of Alaska (American Mail-Order Bride 49) by Cassie Hayes
The Hill: A Short Story (Voices of the Apocalypse Book 3) by Pond, Simone
Esrever Doom (Xanth) by Anthony, Piers
The Care and Handling of Roses With Thorns by Margaret Dilloway
Our partner