Read Whatever: a novel Online 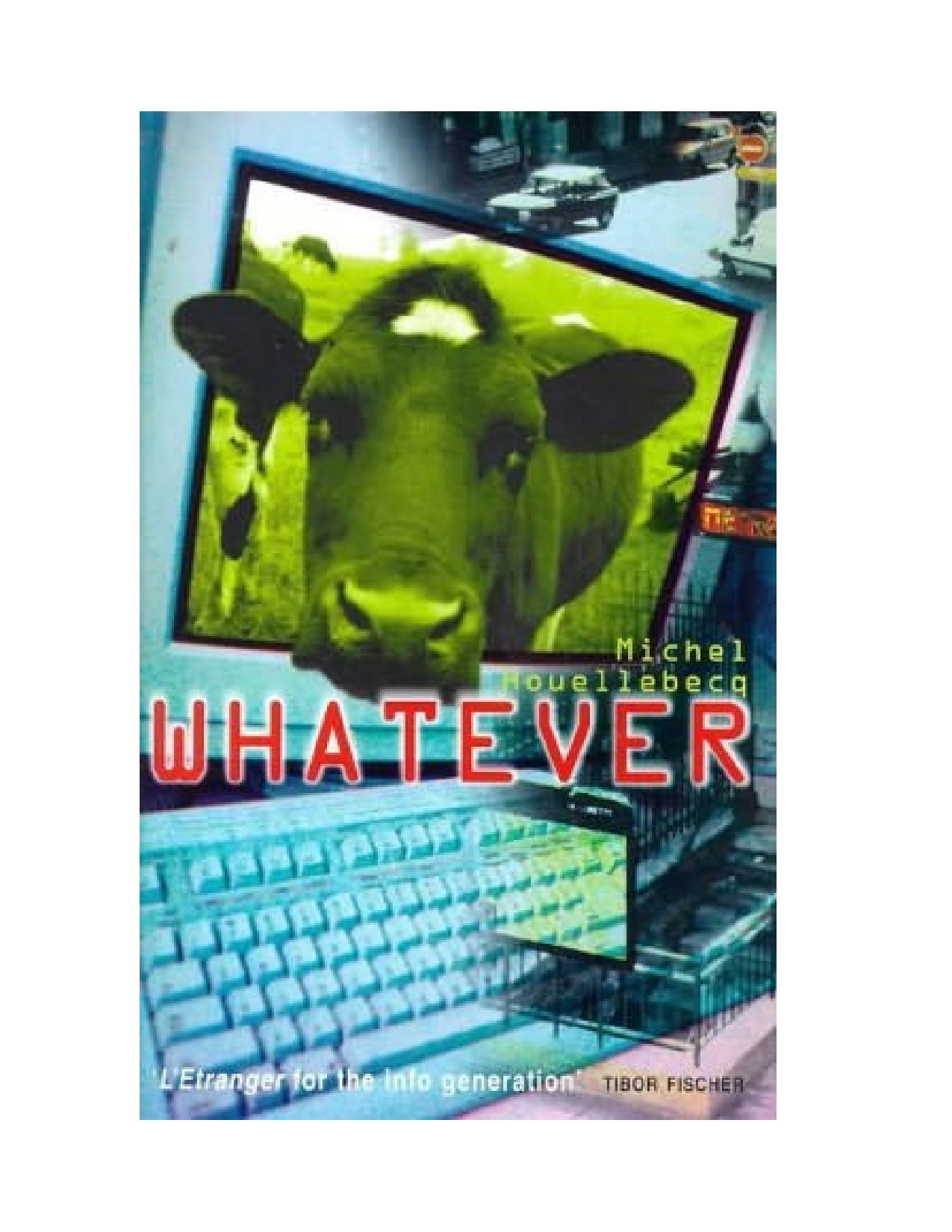 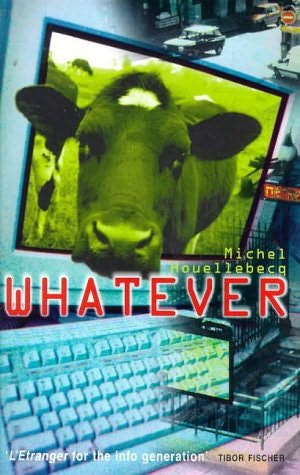 The night is far spent, the day is at hand: let us therefore cast off the works of
darkness, and let us put on the armour of light.

Friday evening I was invited to a party at a colleague from work’s house. There were thirty-odd of us, all middle management aged between twenty-five and forty. At a certain moment some stupid bitch started removing her clothes. She took off her Tshirt, then her bra, then her skirt, and as she did she pulled the most incredible faces. She twirled around in her skimpy panties for a few seconds more and then, not knowing what else to do, began getting dressed again. She’s a girl, what’s more, who doesn’t sleep with anyone. Which only underlines the absurdity of her behaviour.

After my forth vodka I started feeling pretty groggy and had to go and stretch out on a pile of cushions behind the couch. A bit later two girls came and sat down on this same couch. Nothing beautiful about this pair, the frumps of the department in fact. They’re going to have dinner together and they read books about the development of language in children, that kind of thing.

They got straight down to discussing the day’s big news, about how one of the girls on the staff had come to work in a really mini miniskirt that barely covered her ass.

And what did they make of it all? They thought it was great. Their silhouettes came out as bizarrely enlarged Chinese shadows on the wall above me. Their voices appeared to come from on high, a bit like the Holy Ghost’s. I wasn’t doing at all well, that much was clear.

Me too, I’d clocked this girl. It was difficult not to. Come to that even the head of department had a hard-on.

I fell asleep before the end of the discussion, but had a horrible dream. The two frumps were arm-in-arm in the corridor that bisects the department, and they were kicking out their legs and singing at the top of their voices:

If I go around bare-assed,

It isn’t to seduce you!

If I show my hairy legs

It’s because I want to!

The girl in the miniskirt was in a doorway, but this time she was dressed in a long black robe, mysterious and sober. She was watching them and smiling. On her shoulders was perched a giant parrot, which represented the head of department. From time to time she stroked the feathers on its belly with a negligent but expert hand.

On waking I realized I’d thrown up on the moquette. The party was coming to an end. I concealed the vomit under a pile of cushions, then got up to try and get home. It was then that I found I’d lost my car keys.

The next day but one was a Sunday. I went back to the area, but my car remained elusive. The fact was I couldn’t remember where I’d parked it. Every street looked to be the one. The Rue Marcel-Sembat, Rue Marcel-Dassault… there were a lot of Marcels about. Rectangular buildings with people living in them. A violent feeling of identity. But where was my car?

Walking up and down these Marcels I was gradually overcome by a certain weariness in relation to cars and worldly goods. Since buying it, my Puegeot 104 had given me nothing but trouble: endless and barely comprehensible repairs, slight bumps… To be sure, the other drivers feign coolness, get out their nice official papers, say ’OK, no problem’, but deep down they’re throwing you looks full of hatred; it’s most unpleasant.

And then, if you really wanted to think about it, I was getting to work on the métro; I rarely left for the weekend anymore, having no where I wanted to go; for my holidays I was mainly opting for the organized kind, the club resort now and then.

‘What good’s this car?’ I repeated impatiently while marching along the Rue ÉmileLandrin.

It was only, however, on arriving at the Avenue Ferdinand-Buisson that the idea occurred to me of putting in a claim for theft. Lots of cars get stolen these days, especially in the inner suburbs; the story would be understood and readily accepted by both the insurance company and my colleagues at the office. Anyway, how was I going to say I’d lost my car? I’d pass for a practical joker, right off, a fruitcake or weirdo even; this was extremely unwise. Joking about such matters is not the done thing; this is how reputations are made, friendships formed or broken. I know life, I’ve grown accustomed to it. Saying you’ve lost your car is tantamount to being struck off the social register; let’s definitely talk theft, then.

Later that evening my loneliness became tangible, painfully so. On the kitchen table were strewn sheets of paper, slightly spotted with the remains of a Saupiquet tuna à

la catalane. These were notes relating to a story about animals; animal fiction is a literary genre like any other, may be superior to the others; be that as it may, I write animal stories. This one was called
Dialogues Between a Cow and a Filly
; a meditation on ethics, you might say; it had been inspired by a short business trip to Brittany. Here’s a key passage from it:

‘Let us first consider the Breton cow: all year round she thinks of nothing but grazing, her glossy muzzle ascends and descends with impressive regularity, and no shudder of anguish comes to trouble the wistful gaze of her light-brown eyes. All that is as it ought to be, and even appears to indicate a profound existential oneness, a decidedly enviable identity between her being-in-the-world and her being-in-itself. Alas, in this instance the philosopher is found wanting, and his conclusions, while based on a correct and profound intuition, will be rendered invalid if he has not previously taken the trouble of gathering documentary evidence from the naturalist. In fact the Breton cow’s nature is duplicitous. At certain times of the year (precisely determined by the inexorable functioning of genetic programming) an astonishing revolution takes place in her being. Her mooing becomes more strident, prolonged, its very harmonic texture modified to the point of recalling at times, and astonishingly so, certain groans which escape the sons of men. Her movements become more rapid, more nervous, from time to time she breaks into a trot. It is not simply her muzzle, though it seems, in its glossy regularity, conceived for reflecting the abiding presence of a mineral passivity, which contracts and twitches under the painful effect of an assuredly powerful desire .

‘The key to the riddle is extremely simple, and it is that what the Breton cow desires (thus demonstrating, and she must be given credit here, her life’s one desire) is, as the breeders say in their cynical parlance, “to get stuffed”. And stuff her they do, more or less directly; the artificial insemination syringe can in effect, whatever the cost in certain emotional complications, take the place of the bull’s penis in performing this function. In both cases the cow calms down and returns to her original state of earnest meditation, except that a few months later she will give birth to an adorable little calf. Which, let it be said in passing, means profit for the breeder.’

The breeder, of course, symbolized God. Moved by an irrational sympathy for the filly, he promised her, starting from the next chapter, the everlasting delight of numerous stallions, while the cow, guilty of the sin of pride, was to be gradually condemned to the dismal pleasures of artificial fertilization. The pathetic mooing of the ruminant would prove incapable of swaying the judgment of the Great Architect. A delegation of sheep, formed in solidarity, had no better luck. The God presented in this short story was not, one observes, a merciful God.

Yet you haven’t any friends.

The rules are complex, multiform. There’s the shopping that needs doing out of working hours, the automatic dispensers where money has to be got (and where you so often have to wait). Above all there are the different payments you must make to the organizations that run different aspects of your life. You can fall ill into the bargain, which involves costs, and more formalities.

Nevertheless, some free time remains. What’s to be done? How do you use your time? In dedicating yourself to helping people? But basically other people don’t interest you. Listening to records? That used to be a solution, but as the years go by you have to say that music moves you less and less.

Taken in its widest sense, a spot of do-it-yourself can be a way out. But the fact is that nothing can halt the ever-increasing recurrence of those moments when your total isolation, the sensation of an all-consuming emptiness, the foreboding that your existence is nearing a painful and definitive end all combine to plunge you into a state of real suffering.

And yet you haven’t always wanted to die.

You have had a life. There have been moments when you were having a life. Of course you don't remember too much about it; but there are photographs to prove it. This was probably happening round about the time of your adolescence, or just after. How great your appetite for life was, then! Existence seemed so rich in new possibilities. You might become a pop singer, go off to Venezuela.

More surprising still, you have had a childhood. Observe, now, a child of seven, playing with his little soldiers on the living room carpet. I want you to observe him closely. Since the divorce he no longer has a father. Only rarely does he see his mother, who occupies an important post in a cosmetics firm. And yet he plays with his little soldiers and the interest he takes in these representations of the world and of war seems very keen. He already lacks a bit of affection, that's for sure, but what an air he has of being interested in the world!

You are far from the edge, now. Oh yes! How far from the edge you are. You long believed in the existence of another shore; such is no longer the case. You go on swimming, though, and every movement you make brings you closer to drowning. You are suffocating, your lungs are on fire. The water seems colder and colder to you, more and more galling. You aren't that young any more. Now you are going to die. Don't worry. I am here. I won't let you sink. Go on with your reading. Cast your mind back once more to your introduction to the domain of the struggle.

The pages that follow constitute a novel; I mean, a succession of anecdotes in which I am the hero. This autobiographical choice isn't one, really: in any case I have no other way out. If I don't write about what I've seen I will suffer just the same - and perhaps a bit more so. But only a bit, I insist on this. Writing brings scant relief. It retraces, it delimits. It lends a touch of coherence, the idea of a kind of realism. One stumbles around in a cruel fog, but there is the odd pointer. Chaos is no more than a few feet away. A meager victory in truth.