Read When Bad Things Happen to Other People Online

When Bad Things Happen to Other People 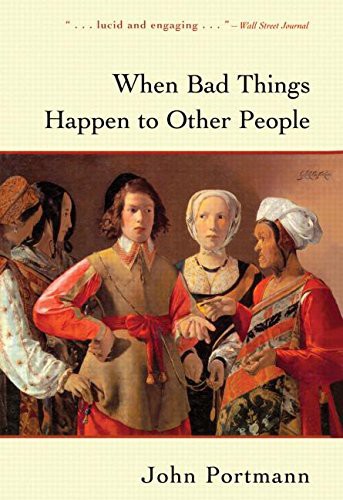 When Bad Things Happen to Other People

What a wee little part of a person’s life are his acts and his words! His real life is led in his head, and is known to none but himself.

INTRODUCTION:
The Sometimes Sweet Suffering of Others

ONE:
Much Ado about Nothing?

THREE:
The Meaning of Suffering

SIX:
Punishment and Its Pleasure

SEVEN:
Cheering with the Angels

CONCLUSION:
The Moral Problem of
Schadenfreude

GAYATRI PATNAIK AND BILL GERMANO warmly welcomed me to Routledge. Their judicious suggestions and unswerving enthusiasm propelled me through the final round of revisions. Finding them at the end of two years of reflection on suffering brought me joy.

Many of our most penetrating thinkers in the West have pondered the central themes in this book—pleasure, malice, justice, punishment, compassion—and my debt to them is very great. Knowing when to footnote requires good judgment, and I hope I have done justice to those now dead.

Some of my scholarly debts are to the living. Exploring our emotional reactions to the bad things that happen to other people led me to Aaron Ben-Ze’ev and Jerome Neu, two philosophers who graciously shared with me their rich insights into the morality of the emotions. Their various objections to and reservations about an earlier draft shaped the scope of this work.

I appreciate the goodwill and useful comments of friends who took the time to read through the manuscript. Paul Barolsky, James Childress, Elizabeth A. Clark, Matthew Crosby, Jessica Feldman, Eugene Rogers, Richard Rorty, Robert Scharlemann, Patricia Meyer Spacks, and Daniel Westberg have my gratitude. Emma Cobb suggested the title just before I finished writing and urged me to leave behind my own, which she found drab. Andrew Solomon, the pride of our Yale class, carried the unbound tome with him through Africa and offered copious improvements. David Cartwright read the chapter on Nietzsche, Brian Hebblethwaite the chapter on God, and Virginia Germino went over every word with loving solicitude. Diane Gibbons copyedited the manuscript with great skill. Each of these readers has disagreed with me in some way, and I value the challenges they have set before me.

Cynthia Read breathed life into this project. Her measured criticism of earlier drafts encouraged me along the way.

More than anyone else, Daniel Ortiz inspired and supported me throughout my research. To express fully my gratitude to him would require more space than I have here. Dedicating this book to him will have to suffice.

INTRODUCTION:
The Sometimes Sweet Suffering of Others

WE SUFFER. IN VARIOUS WAYS and to varying degrees, we suffer. Do we deserve to suffer? If not, then why do we suffer? And what, if anything, does our suffering mean?

Though answers to these perennial questions elude us, we have not stopped wondering if we are to blame for our hardships. For many centuries very different kinds of people have believed that God, or some all-knowing cosmic force, causes us to suffer after we sin. Not long ago Rabbi Harold Kushner tried to assure us that God does not operate like this: it is not because we are bad people that we suffer, for bad things can happen even to good people. Much suffering happens randomly, Kushner urged us to accept, and has nothing to do with cosmic justice. Kushner’s message, by no means an original one in the late twentieth century, landed his book
When Bad Things Happen to Good People
on the best-seller lists.

What about the bad things that happen to
other
people? The doubts we have about our own goodness pale in comparison to the doubts we entertain about the goodness of others. Especially when we think about others with whom we have nothing in common, skeptical thoughts colonize our minds. We are more likely to view the misfortunes of others as deserved than we are our own. Even when we do not genuinely believe that someone else deserves his suffering, we may try to convince ourselves he does.

This book concerns how we
feel
about the bad things that happen to other people, not what we
do
about them. As such, this book concerns character, not conduct. Curiously, some moral philosophers have insisted that a person’s character and emotions don’t merit much attention. Kant and his many followers tend to see conduct as all-important. It’s not how we feel about other people that matters, it’s how we
treat
other people. I disagree. With Aristotle, Schopenhauer, and Nietzsche, I view a person’s character and emotions as compelling subjects of moral study.

Our emotional responses to the misfortunes of others can tell us much about our characters. Some of our most revered moralists have insisted that virtually everyone feels sympathy when bad things happen to other people, for being human means being sympathetic to others. This cheery position seems to
require
us to feel sympathy for people who suffer, which I see as a problem. For nothing undermines sympathy more than the requirement to feel it. (The indiscriminate yearning to feel sympathy, a form of sentimentality, comes in a close second.) Sympathy either comes to us uninvited or not at all.

Other, less cheery thinkers have roundly rejected the idea that to be human is to feel sympathy for others. This crucial discrepancy signals trouble ahead: if we cannot agree about whether people naturally sympathize with others, we will not be able to acknowledge, much less evaluate, people who celebrate the bad things that happen to others.

We are surrounded by people who take pleasure in our misfortunes. Nietzsche and Freud agreed on this and constructed philosophical arguments around what they took to be the frequently selfish motives of people caught up in moral deliberations. Although I am less cynical than they, I believe Nietzsche, Freud, and others who agree with them describe our emotional lives much better than anyone else. I also believe that the fears of our moralists have much to teach us about how to get along well with others.

We do well to appear sympathetic generally. This may be difficult when we feel indifferent to the bad things that happen to others. In indifference we do not engage with those who suffer in any way. We simply do not care about their setbacks, or cannot be bothered by their misfortunes. We may feel that we have to save our limited sympathy for someone who merits it more, or we may feel that time constraints prevent us from thinking much about the suffering of another.

Sometimes we pretend to sympathize with others when we don’t, because we are taking out a sort of insurance policy to cover our own needs when disaster strikes us. Pretending to be sorry remains a permanent possibility for all of us, which complicates human relations. It seems in our best interest to appear benevolent toward those around us: doing so increases the likelihood that others will help us get what we want, or at least decreases the chances that others will disrupt our plans. Faking our feelings comes at a cost, though: we wonder whether others might be doing it too when they comfort us.

It can be difficult indeed to
make
ourselves feel as we think we ought to feel. Saying “I’m sorry” is easier than feeling sorry, even though many people consider “sorry” the hardest word to say. Nonetheless, sorrow may at times seem simply impossible, for it can feel wonderful to learn that something bad has happened to someone else. Even Kant, who believes we are all inclined to feel sympathy toward others, admits this much, writing in the
Critique of Practical Reason
: When, however, someone who delights in annoying and vexing peace-loving folk receives at last a right good beating, it is certainly an ill, but everyone approves of it and considers it as good in itself even if nothing further results from it; nay, even he who gets the beating must acknowledge, in his reason, that justice has been done to him, because he sees the proportion between welfare and well-doing, which reason inevitably holds before him, here put into practice.1

Kant does not state in this passage that
all
people deserve to suffer, but even the claim that
some
people deserve to suffer can set us to arguing. It might be thought that a stiff Protestant moralist such as Kant would advocate tirelessly forgiving everyone, even annoying neighbors (this is what Jesus exhorts his followers to do). However, even Kant’s patience has its limits.

Kant’s thinking in this passage raises a vexing question: does permission to “approve” of the suffering of other people amount to permission to
celebrate
it? Not exactly. Kant’s moral psychology resembles that of Augustine, St. Thomas Aquinas, and some modern moral philosophers: love the sinner, hate the sin. It is not the suffering of others that brings us joy, but rather the evidence of justice triumphing before our eyes. Through this crucial difference Kant can think of himself not as a malicious person, but a virtuous one.

Michelangelo depicted this pleasure in
The Last Judgment
, perhaps XIV the most famous painting in the West. As we raise our eyes above the sinners suffering horribly in hell, we see a joyful group of angels. Looking beneath them at the damned, the angels blow trumpets in jubilation. One of the angels brandishes the tablets of the law as if to say to the damned,

“See, you’re getting what you deserve.” Another artistic depiction of Kant’s pleasure can be found in an arresting and highly unusual painting of the Crucifixion by the Norwegian painter Edvard Munch.
Golgotha
, which contains autobiographical elements, includes a couple of prominent onlookers who smile with delight. One of them looks directly at us. It is surprisingly rare in paintings of the Crucifixion for a witness in the crowd to engage us so openly in his approval of Christ’s suffering, even though we know that plenty of onlookers that day believed Jesus received exactly what he deserved. These are presumably some of the same people whose misery the angels celebrate in Michelangelo’s masterpiece, the spiritual core of the Sistine Chapel.

We often believe, as Kant seems to in this passage, that bad people cause trouble for themselves. We may view misfortunes as the appropriate consequences of imprudence, stupidity, incompetence, bad judgment, or evil. Good people love justice; loving justice is a virtue. When bad things happen to bad people, the world seems to be working fine.

When
we
suffer, we may fear that others think we deserve to suffer. The harsh judgment of others only increases our suffering. And so, we may cringe when we read of Kant’s confidence that a man who suffers will agree with others that he deserves to suffer (Anna Freud was later to classify such feelings as a neurosis, “identifying with the aggressor”). As we grow older and get to know suffering better, we may find that we have to overcome something slightly dreadful when we resolve to hold someone else guilty for his or her suffering. Reassuring ourselves that we are good even when we approve of the suffering of others may lead us to tell ourselves a story such as Kant tells himself.

Disagreement about suffering—what it is, who deserves it, and how much—divides us deeply. Schopenhauer asserts that mental afflictions hurt much worse than physical ones—he even suggests that we slap, burn, or puncture our bodies when mental afflictions beset us. The resulting physical pain, he counsels, will serve as a good distraction from the horror of mental suffering. We might argue at length over whether mental The Sometimes Sweet Suffering of Others suffering hurts more than physical pain, but we will all agree that suffering deserves our attention. Surprisingly, Schopenhauer was the first Western philosopher since the ancient Greeks to ponder suffering at length.