Read When It Hooks You (It #1) Online 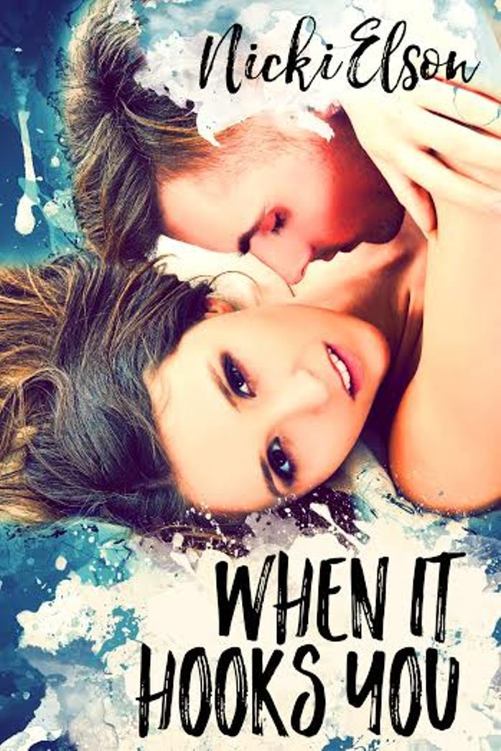 Sneak Preview from When It Holds You 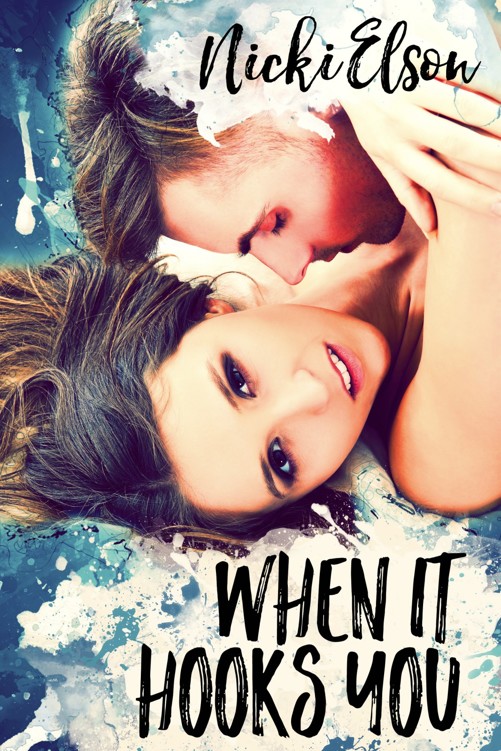 When It Hooks You

When It Hooks You, Copyright © 2016 by Nicki Elson

This book is a work of fiction. While references may be made to actual places or events, the names, characters, incidents, and locations within are from the author’s imagination and are not a resemblance to actual living or dead persons, businesses, or events. Any similarity is coincidental.

This book is licensed to the original purchaser only. Duplication or distribution via any means is illegal and a violation of International Copyright Law, subject to criminal prosecution and upon conviction, fines and/or imprisonment. No part of this book can be reproduced or sold by any person or business without the express permission of the publisher.

This one is my love note to the city of Chicago. Stay beautiful, beautiful.

K
URT’S
S
MILE
F
ALTERED
for the seventeenth time that evening. Something was up with him, and Trish knew exactly what it was—he was going to propose. Why else would he have acted so fidgety and uncomfortable throughout the expensive dinner he’d insisted on buying her? He definitely planned to ask her to marry him. And this time, she’d say yes.

He stayed mute as they left the table and bundled up to step outside. Once on the sidewalk, the clomping of horse hooves on pavement drew Trish’s attention to the busy city street. Hoping to help her boyfriend along in his quest, she nodded toward the old-timey carriage and asked, “Want to hail one of those?” He was clearly waiting for all the stars to align in the ultimate perfect moment, and watching him twist had become torturous.

“What?” Diverting his green eyes from their study of the lights along Michigan Avenue, he looked straight at her for what felt like the first time all night. She smiled, wanting to tease him about being so nervous, but his wide mouth tensed into a tight frown. “Let’s walk.”

Trish’s breath clouded as she exhaled into the January night. She wondered how long he’d last in the cold with no hat, especially since the bristles of his closely cropped hair provided poor coverage. Perhaps his uneasiness caused brain friction, keeping him warm.

She didn’t blame him for being wary. It had been almost exactly a year earlier that he’d proposed the first time. Trish hadn’t said no, but she hadn’t said yes, either, and the whole ordeal had led to a breakup.

She’d always known the separation would only be temporary. If he loved her enough to propose, he’d love her enough to give her a little more time before he imposed marriage on her. No, not
imposed
. That was an unpleasant word. She quickly discarded
inflicted
and
forced
when they flashed through her brain as potential replacements.

Oh, what did it matter which word she used? The point was that Kurt had gotten over his hurt feelings, they’d gotten back together, and now Trish had had her time and was ready. She just needed him to ask the question.

“Can we go in here?” He inclined his head toward an arch that opened to a small courtyard. Most people visiting the trendy shops and restaurants nearby missed this little gem, but it was one of Trish’s favorite secrets of the city—as Kurt well knew. So this was it. This was where she’d say yes to the man she’d spend the rest of her life with.

Her stomach clenched, and she had to tighten her throat to discourage the bile that rushed up. She cursed the rich crab dip she’d scarfed down earlier. Taking a slow inhale through her nose, she attempted to reinstate the quiet calm she’d felt with Kurt ever since they’d gotten back together. That calmness was security to her, a confirmation of her certainty that he was the one.

The two of them crossed over the threshold to find the winter garden uninhabited. While they moved over the square of hardened earth toward the dry stone fountain at its center, Trish slid gloved fingers over Kurt’s palm. Before she fully grasped onto him, he yanked his hand away and took a sharp step back.

“Trish—” He paused, and she watched a sickly pallor creep across his handsome features. His pupils darted back and forth over her face, carefully studying her reaction as he said, “I’ve met someone else.”

Not the four words she’d expected. Balling the fingers he’d left dangling, she felt hot tingles rush across her cheeks and throat.

“I didn’t mean for this to happen. I swear.”

“What, exactly, didn’t you mean to happen?” The iciness in her tone had nothing to do with the frigid Chicago temperature—maintaining this stoic posture was the only thing that kept her from screaming. He was supposed to be proposing right now. She was supposed to be falling into his arms, telling him yes.

The muscle at the corner of Kurt’s jaw bulged. “I’d give anything to not have to say this…” He stared hard at her, his beautiful eyes glassy as if pleading for her to make this easier for him.

“Say it,” she commanded in a harsh whisper. “Just say it.”

“I’m in love with someone else.”

Again, not the words she’d expected. “Love? Really? Are you sure
cheating
isn’t a better term?”

He stayed silent and turned his face to the side. With the moonlight capturing his full profile, Trish was struck by its familiarity. She knew every line of it, every curve, every blemish. This was a face she loved. Suddenly, she didn’t want to increase the tension. She only wanted to erase this hideous diversion and get them back on track toward where they should be.

“Look, I know I made things hell for you,” she said. “Right when you were ready to give me your forever, I took a giant step back.” Her eyes dropped to the pile of dried and frozen leaves that had gathered at the basin of the empty fountain, and she attempted to truly mean what she was about to say. “Even though I can’t quite forgive you right now, I understand. You took a massive emotional blow, and if this is what you needed to do in order to get over it so that we can move forward, I can learn to be okay with that.”

She dared a peek up and saw the pained crinkle at the corner of his eyes and the severe downward slope of his mouth. Even when she’d rejected his prior proposal he hadn’t looked so filled with dread.

“It’s not like that, Trish.” His voice was very soft. “I don’t want to move forward with you. I need to end this. Tonight.”

All the understanding and diplomacy she’d mustered moments ago popped and fizzled. “Because of that slutbag?”

“She’s not a slutbag.” He maintained steadiness in his voice, but she heard the quiver underneath.

“Look up the word in Urban Dictionary—I’m sure at least one definition involves sleeping with another woman’s boyfriend.”

“I haven’t slept with her.”

“Knock it off! This isn’t even about her. It’s about me and you.”

“Then why did you broach the subject with ‘I met someone else’?”

His rough exhale sent a dragon-worthy puff into the night. “Because meeting her is what opened my eyes to how unhappy I’ve been with you.”

Trish snorted. “Whatever you want to tell yourself. No matter how you explain this, the nasty truth is that you’re dumping me for that slutbag. I have no idea why you felt the need to make a big production out of breaking up with me. I mean, seriously, Kurt. Was dinner really necessary? And the carriage ride?”

“We never went on a carriage.”

She glared at him and continued, “And bringing me to one of my favorite spots in the whole city.” She gestured wide and then made the mistake of looking around the hidden garden and letting flashes of memories invade her. Memories with Kurt. The first time she’d brought him here. Holding his hand and laughing at some silly joke. Kissing him. Tossing coins into the fountain…telling each other their naughty wishes…going back to his place and granting them. “Do you hate me so much that you want to ruin this place for me? Why didn’t you tell me you were unhappy?”

He bent to sit on the ledge of the fountain. “Bad choice of words. I wasn’t unhappy. I was…comfortable, I guess. But I realized I want more than that.”

Trish’s sigh was so heavy it hurt. The quiet calm she’d felt with him these last few months hadn’t been certainty and security, after all. It was boredom.

With his elbows resting on his knees, Kurt clasped his hands together and tilted his head, peering at her sideways. “Don’t you want more, too? Isn’t that why you turned me down when I proposed?”

Trish shook her head, her dark blond waves swishing beneath her knit hat. “We’ve been through all of this. You know that wasn’t it.”

“No, Trish, I don’t know that, actually. None of your explanations ever made any sense to me. Until I met Lauren.” One side of his mouth twitched up when he said the slutbag’s name. The tiny, inadvertent gesture crawled under Trish’s skin.

“How did
she
make this all clear to you?”

“I don’t know.” His lips morphed into a smile, as if he was completely oblivious to the raw emotions of the woman standing in front of him. “All this time the plan was to propose to you again at some point and make a life together. But she came along, and…I don’t know…now the idea of committing to you and giving up the chance to pursue things with her is…depressing.”

“Seriously? You think that’s okay to say to me? I mean, my God, if you’re going to be a dickhead, at least have the courtesy of doing it while I have a drink in my hand so I can throw it in your face! Is that why you wouldn’t go on the carriage? Because you didn’t want to give me the opportunity to shove your ass off?”

Trish felt somewhat vindicated that his smile had vanished. “No, Kurt, I won’t calm down. Because who does this? Who takes a girl out for a nice, romantic dinner, walks her to her most cherished site in the whole city—”

“Hardly the most cherished.”

She didn’t even hear him. “—and then tells her he’s trashing their whole relationship for some
slutbag?”

“She’s not a slutbag!” He thrust up to standing and glared at her.

Trish glared back, not even sure what made her more angry—that he was breaking up with her or that he kept so vehemently defending this faceless woman. “You know what? I don’t need a full drink, Kurt.” Her eyes flashed around the courtyard and landed on the fountain bed.

Druid Knights 02: Knight of Rapture by Ruth A. Casie
010 Buried Secrets by Carolyn Keene
A Good Day To Die by Simon Kernick
Revolt by Shahraz, Qaisra
The Flood by Michael Stephen Fuchs
Homegoing by Yaa Gyasi
An Inca Account of the Conquest of Peru by Ralph Bauer
The Strip Club Dating Survival Guide by Jason Keeler
Oogy The Dog Only a Family Could Love by Larry Levin
Lissa- Sugar and Spice 1.6 - Final
Our partner