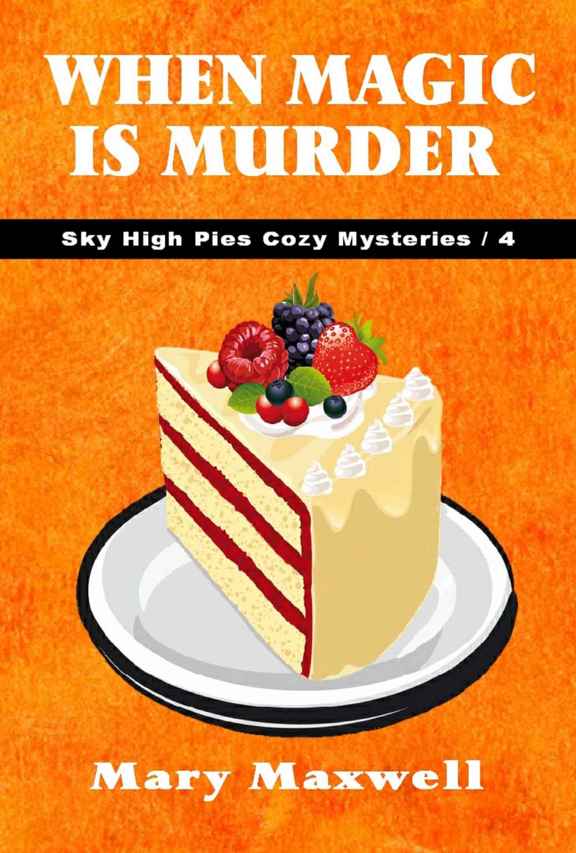 When Magic is Murder

This is a work of fiction. Names, characters, places and
incidents are the product of the author’s imagination or used fictitiously, and
any resemblance to actual persons, living or dead, business establishments,
events or locales is entirely coincidental.

All rights reserved. No part of this book may be reproduced,
stored in a retrieval system or transmitted in any form or by any means
electronic, mechanical, recorded or otherwise, without the prior permission of
the author except for the use of brief quotations in a review.

I had just finished decorating
three dozen Toasted Coconut Truffle Cupcakes when a woman came into the kitchen
at Sky High Pies through the back door. She was carrying an attaché case in one
hand and a large blue envelope in the other.

“Are you Kate Reed?” she asked,
putting her things on the counter and removing a pair of sleek red leather
gloves.

It was half past three on a sunny January afternoon. Sky High, the bakery café that I run in Crescent Creek, Colorado,
had been closed for thirty minutes. Despite Julia’s offer to stay and help with
the final special order of the day, I’d sent the hard-working chef home so she
could enjoy the unseasonably warm afternoon. Harper, the majordomo of the
dining room, was working on an inventory of cleaning supplies and paper
products. The cupcakes were for a bachelorette party that a woman from New
Orleans was hosting that evening at Crescent Creek Lodge. I had exactly
thirty minutes to arrange them in boxes, drive across town and make the
promised delivery time.

“I’m Francine Tobin,” the woman
announced, tucking her gloves into the briefcase. “I’ve come to see you about a
very important matter.”

The name didn’t ring a bell, so I
glanced at the whiteboard on the wall. We used it to prioritize daily prep
tasks and manage a steady stream of special orders. My eyes raced down the list
of pending requests, but I didn’t see the woman’s name.

She looked to be somewhere in the
vicinity of forty-five. Her auburn hair was cut short and slicked back with
gel, accentuating her high cheekbones, slender nose and ruby red lips. She was
wearing a diamond on her left hand the size of a pomegranate and a platinum
Rolex glinted on her wrist. Beneath her fur-trimmed cashmere cape and Hermès
scarf, she was dressed in a high-end paisley silk dress. I recognized her
$6,000 Louboutin black alligator pumps from a divorce case I’d worked during my
days as a private investigator in Chicago.

“I’m so sorry,” I said, wiping my
hands on a towel. “Are you picking up a special order?” I paused, but she
didn’t respond. “Or did you need to place one?”

The icy gleam in the woman’s eyes
thawed into a bemused smirk. “I’m not here for baked goods, Miss Reed.” She
glanced at the swarm of cupcakes arranged on the counter; each one topped with
a blanket of glistening ganache and a layer of toasted coconut. “Although they
do look quite…charming.”

I was exhausted from the day and
still had to deliver the cupcakes, but I ignored the ill-behaved juvenile
voices in my head—
Smear frosting on her nose! Sprinkle coconut in her hair!—
and
thanked the stranger for the superficial compliment.

Her nose crinkled. “Thanks, but
no,” she said dismissively. “I try and watch my weight.” My gaze flicked down
to her sticklike figure. “And my trainer would kill me if she found out I’d
cheated on my diet with…” Her eyelashes fluttered as she searched for the right
words. “Well, something so…
frivolous
.”

I nodded, but refrained from
defending our delicious goodies. Instead, I smiled and said, “If you didn’t
stop by for pies or cupcakes, how can I help you?”

I felt a subtle tremor somewhere
deep inside. The day had been a mad whirlwind. Between our usual steady stream
of customers, I’d been flooded with telephone calls in response to a post on
our website about Valentine’s Day gift baskets. After sending Julia out the
door at three o’clock, I’d planned to deliver the order for the bachelorette
party and race home for a quick power nap before getting ready for my date with
Zack. I certainly hadn’t allowed time for an unexpected offer to buy our family
business.

As Francine Tobin continued
flashing her self-satisfied smile, my mind staggered with a rush of overlapping
thoughts.
How would Nana Reed handle this situation? Would she deliver a zinger
and send this woman packing? Would she throw back her head and laugh? Or would
she
—

I realized the Goddess of Dietary
Virtue was thumping her French manicure on the stainless steel countertop.

“What do you think?” she said in a
chilly tone. “I came up from Denver today because I didn’t hear from you last
week.”

I took a deep breath. “I’m sorry,”
I said. “I don’t remember getting a message that you’d called.”

She lifted the pale blue packet
from the counter. “I’m referring to this,” she said. “I mailed the first copy
of the offer letter to you last Monday. Did it finally reach you by any
chance?”

My mind skittered back to the
previous week. Our breakfast and lunch business had been especially hectic, and
we’d been swamped with a seemingly endless avalanche of last-minute special
orders for cakes and pies. I’d sifted through the daily mail at some point each
evening, but it was entirely possible the woman’s previous letter was still
buried on my desk somewhere.

“Well, I’m sorry that I haven’t
been in touch,” I said as she returned the envelope to the counter. “But I
don’t think—”

“There’s no need to apologize,” the
woman announced. “I decided to hand-deliver the letter because I discovered
this morning that my assistant had…” She paused, smiling to reveal teeth as
white as bleached bone. “I should say, my
former
assistant had somehow
confused Sky High Pies here in Crescent Creek with Mile High Pies in Crested
Butte.”

She retrieved a business card from
her attaché case, placed it on the blue envelope and tapped it briskly with one
perfectly sculpted nail.

“I can be reached at the office
number in Denver,” she said assertively. “Or I’ve also written my mobile number
on the back. No matter the time of day or night, I’ll be ready to negotiate an
agreement that’s fair to all parties. I know you haven’t seen the proposal yet,
so I’ll give you some time to mull it over.”

I brushed a few strands of hair
from my eyes with one knuckle. “I’m really sorry, Miss Tobin, but I—”

She laughed; a sub-zero jingle that
was both irritating and insincere. “
Everything
is for sale, Miss Reed.
It’s simply a matter of finding the right price.”

As I kept my eyes fixed on the
woman’s face, I imagined what Nana Reed would say. Sky High Pies had been a
family business since my grandmother first opened the doors in the 1970s. After
piloting the enterprise for fifteen years, she passed the torch to my mother
and father. They continued the tradition of serving breakfast, lunch and tasty
sweet treats to local residents and tourists for a quarter century. When my
parents decided to retire, trading Colorado and the Rocky Mountains for a cozy Florida
condo on the Gulf of Mexico, I returned to my hometown and became the third
generation to run Sky High. Since then, I’d survived long days, sleepless
nights and plenty of grouchy customers. But I’d never been approached by a
snooty Denver attorney with an offer to buy the business.

“Perhaps you should take a little
bit of time to review the offer,” Francine Tobin said, drumming the envelope
again with her slender fingers. “I’ll call you soon to discuss the fine print.”

“In the meantime,” she added, “if
you have questions, please let me know.”

I raised my hand. She glared down
the length of her tapered nose.

The sulky attorney sneered. “I’m
not at liberty to say. The buyer would prefer to remain anonymous.”

“Is it Colette Coscarelli?” I
asked, conjuring an image in my mind of the former Las Vegas showgirl. “She
approached my parents once with the same idea.”

Francine Tobin’s nose twitched as
if she’d just smelled something foul. “Are you unfamiliar with the concept of
anonymity, Miss Reed?”

The tiny voices in my head began to
shriek:
Kick her in the shin! Dump the rest of your cappuccino on her pointy
little head!
And even though I was more fatigued than I’d been in weeks, I
skipped the imaginary suggestions and offered a genuine smile before answering
her question.

“Of course, I know what anonymity
is,” I said. “But in my humble opinion, secrets and mysteries are best-suited
to detective novels, not the conversations I have here in our kitchen. It’s
common knowledge that Colette really wanted to buy Sky High when she moved back
to town last year. And I hate to disappoint the two of you, but the place isn’t
for sale.”

Francine Tobin chuckled. “I
understand that you feel overprotective about the business. I mean, your
grandmother started the place ages ago and it’s been in the family ever since.
But I know about your true passion, Kate. You’re frittering away your days
serving flapjacks and slices of pie when you should be using your little gray
cells to crack cases and solve murders.”

“Isn’t that what Hercule Poirot
says in the Agatha Christie books?” she asked. “I’ve heard you’re a fan.” The
self-satisfied tone of her voice was like nails on a chalkboard. “I’ve also
been told that childhood reading habits were partially responsible for your
first career as some sort of private detective.”

I could tell my visitor was
intelligent, but I didn’t take her as a bibliophile. Besides stuffy legal
briefs and menus at five-star restaurants, I imagined the longest thing she’d
read recently was the label on her Michael Kors paisley silk dress.

“Yes,” I said, finally answering
her question. “How did you know that I used to be a PI?”

She smiled. “Like you,” she said,
“I have my sources. But also like you, I prefer to keep them to myself.”

After another ten minutes of
conversational volleyball, Francine Tobin announced that she needed to leave.
“It’s been such a pleasure meeting you,” she said, slipping into her red
leather gloves. “I’ll look forward to talking again soon.”

I offered the most authentic smile
I could muster and watched while the posh black pumps carried Francine Tobin
across the kitchen and out the door.

“And that, ladies and gentleman,” I
said to the empty room, “is what Nana Reed would call a waste of good makeup.”

Tower: An Epic History of the Tower of London by Jones, Nigel
The Maldonado Miracle by Theodore Taylor
[Queen of Orcs 01] - King's Property by Morgan Howell
The Small House Book by Jay Shafer
Handwriting by Michael Ondaatje
Justus by Madison Stevens
On the Brink by Henry M. Paulson
Cassandra's Dilemma by Heather Long
DUSKIN by Grace Livingston Hill
Tears of Adamas: A New Old-Fashion Fairy Tale Short Story by Su Williams
Our partner