Read When Pussywillows Last in the Catyard Bloomed (rtf) Online

When Pussywillows Last in the Catyard Bloomed (rtf) 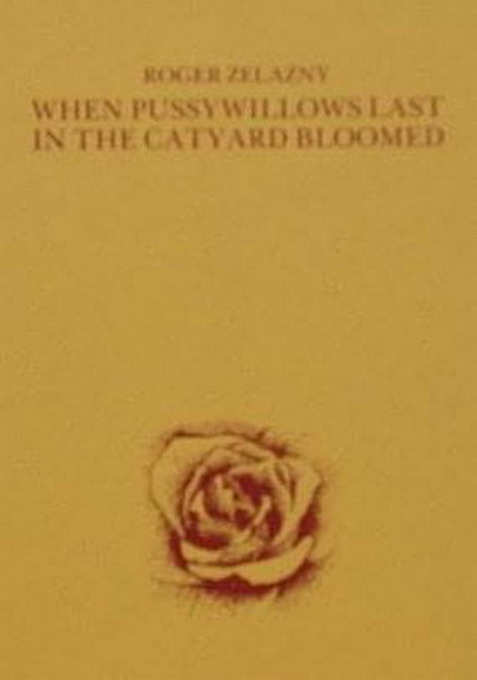 With Drawings by Geoffrey Pollard

This book is copyright. Apart from any fair dealing as permitted under the Copyright Act, no part may be reproduced by any process without permission. Enquiries should be addressed to the publisher.

When Pussywillows Last in the Catyard Bloomed

Thoughts of the Jupiterian Frantifier Fish

Future, Be Not Impatient

Somewhere a Piece of Colored Light

What is Left When the Soul is Sold

Our Wintered Way Through Evening, and
Burning Bushes Along It

The Man Without a Shadow

In the Dogged House

The Doctrine of the Perfect Lie

The idea of this collection was first discussed in 1978 when Roger Zelazny was in Australia as Guest of Honour at UNICON 4. A number of people have worked to make this collection a reality. We would like to thank Keith Curtis who first thought of the idea, and Terry Dowling, George Mannix, John Davies, and Van
I
kin, who all helped at some stage.

with gratitude and affection

In an earlier incarnation I wanted to be a poet. For about five years then (from approximately 1956 to 1961) I wrote nothing but poetry—incredible amounts of it, mostly bad, but improving somewhat as time went on. Twice in my college career, I received Western Reserve University’s Finley Foster Poetry Award for some of it. The only piece preserved in this volume from one of those competitions is the Hart Crane elegy “Cross Caribbean”. In or about 1961 I realized that only Robert Frost and Carl Sandburg were making their livings writing poetry whereas numerous other authors were doing well under the wings of muses less comely. The writing was there on the washroom wall. I wanted to be a full-time professional writer. I made my decision and wrote the story “A Rose for Ecclesiastes” in October of 1961 and said good
-
bye to all that. I parked that particular story in a briefcase, took a safe government job in February of 1962 and began a steady output of science fiction stories. I began selling them around the end of March of that year.

But poetry had a way of creeping into a few of those early stories—and when I needed a poem I still had batches of them to draw upon, though I’d chucked hundreds when I’d made my decision for prose. A few of those remaining fit stories
here and there and a few others were passed along to fanzines, till I’d exhausted the file. Some of these were leftovers from a MS unsuccessful in the Yale Younger Poets Competition (I forget which year’s; and the name of the volume was
Chisel in the Sky
, if anyone cares).

Of these early pieces, the only halfway decent ones remain-ing were the dozen which I assembled for a souvenir booklet published in an edition of one thousand by the 1974 World Science Fiction Convention (Discon) at which I was guest of honor, and “Lover’s Valediction...“ which I recently came across when reviewing some old files. These thirteen are included herein, and here is where they’ve been: “Braxa” is from my story “A Rose for Ecclesiastes”, “Brahman Trimurti” appeared in
Nyarlathotep 3
(and, I believe, in my old college literary magazine
Polemic
), “Thoughts of the Jupiterian...“ was in
Kallikanzaros 4
, “Future, Be Not Impatient” is from my story “The Graveyard Heart” (and probably drawn from the old
Chisel
MS), “Somewhere a Piece of Colored Light” was in
Double:Bill
10, “Flight” is from “The Graveyard Heart” also, “What is Left When the Soul is Sold appeared in
Yandro 166
,
“Our Wintered Way through Even
ing...“ was another piece from “The Graveyard Heart“, “The Man Without a Shadow” was in
Amra
, vol. 2, no. 34 — and I believe it also appeared in another old college literary magazine,
Skyline
— and “In the Dogged House“ was another “The Graveyard Heart" piece. Thanks to every and all for a first or second showing.

And two
Chisel
survivors, which arc also included here, emerged in 1977 to appear in
The Speculative Poetry Review
. These are “Wriggle under George Washington Bridge“ and “Faust before Twelve”. Then “I, the Crooked Rose's Dream ...” also appeared in
The Speculative Poetry Review
but was not a
Chisel
piece. It came later, but I am no longer certain exactly how much later.

“When Pussywillows Last...“,
The Doctrine of the Perfect Lie” and “I Used to Think in Lines...“ were written sometime during the past year,
and this is their first appear
ance in print.

Every generation seems to breed an eccentric, talented poet who dies young and becomes something of an idol to the next generation. Sylvia Plath was too late for me in this
respect. In my day it was Hart Crane. I’ve read and still read a lot of poetry, but Crane’s word magic probably had the most influence on whatever poetic style I may have. Next among favourites then came Dylan Thomas’ incantations and later, Yeats’ starkness and symbolism—with Auden’s humor and Robert Lowell’s power as sources of extreme reading pleasure to me. Rilke and Lorca were there early, too. Pound I respected, but that’s hardly the same thing. Eliot seemed to have too many answers, and I was always suspicious of him no matter how well he phrased them. Galway Kinnell came later, and much later Diane Wakoski—along with a whole string of others. My formative years were past by then, though, and there is nothing to be gained by listing the names. Mainly, Hart Crane it was who struck the first chord I can recall, arousing my interest and later my respect, then love for the games the language plays.

Hell. I talk about these people and things as if I were a pro
in this area, and I’m not. I mean only to state a few preferences and probable influences for Those Who May Care. I once knew the area fairly well, but I’m hardly out to reverse my decision of seventeen years ago and return to a first love with a boyish grin and a fistful of flowers. I feel more like one of the cows who’d wandered up to a trellis for lunch and later ruminated, “Everything’s coming up roses”.—Sorry about that, but there you are. I did have an extra reason for saying it, though.

I did win one other literary competition involving poetry in my college days. Cleveland poetess Collister Hutchison was asked to judge the contents of the April 1959 issue of
Skyline
magazine, selecting a single piece to receive a small cash award and a letter of comment. She gave it to my poetry parody piece “Decade Plus One of Roses” and allowed that despite its flippancy the author might amount to something as a writer one day if he applied himself. (For whatever it’s worth, here it is. It doesn’t belong in the body of this book, but it can occur at this point as an autobiographical gesture indicating interests and attitudes. Anyone with rose fever go directly to the end parenthesis and wait with the cow
:

The Rose rose from rose-rows.

Find me my paper,
here’s my pen;
Don’t bother to bring them back again.

You drowsed in the hammock that day
I planted a rosebush for you.
I think I’ll go and see your roses play
Among the winds. (Why don’t you come to?)

April is very cruel,
Consequently no roses in this hemisphere
(But among the Bavenda
Red flowers figure prominently in funeral rites).

Paper rose! green in morning’s bed,
Gold in the evening, dead:
Hell rose in your writing to red.

One dozen ways of wearing roses,
And no one is wrong forever.

XI. ROSE ON THE ROAD.

Homo rose!
crushed in the staggering morning,
spit upon,
cursed in the garbage-spilt light.

Well. End of gesture. He was a good kid and it was nice meeting him again. He began taking things more seriously immediately thereafter.)

As with my stories, I have nothing to say concerning the substance of the following pieces. They either say it themselves or fail to. In the former case, my comments would be redundant; in the latter, too late. I like to think that if I’d stayed with it I could have amounted to something as a poet. I hope these pieces at least show the direction in which I might have gone.

WHEN PUSSYWILLOWS LAST
IN THE CATYARD BLOOMED

When pussywillows last in the catyard bloomed . . .
Fine line.
Lacking an accompanying thought, perhaps,
yet...
My life is full of yets.
We assemble ourselves slowly,
collecting pieces (such as the above).
Not all of them fit
and some should not have
but did (such as the above).
Yet... I lack. Many things.
But have the pussywillows,
and there are the cats
(envision them in heat if you would;
hear their drawn-out wet-baby wails;
hear them purr if you'd rather,
or spit).

I have the yard.
The sun dies to the west of it,
placing me in an enviable position
stage left of moon and star.
Constellations chart themselves,
stick-figured: geometry,
parsimony, pieces...
Yet you are there, Old Bear,
despite;
and beyond, the God of Galaxies?
(Praise Him, praise Him, Van Doren?
I
cannot.
I've learned when to keep my mouth shut.)
Regard and rejoice with me
if the piece be there.
Yet I lack the art critic's part.
Forgive.

When pussywillows last in the catyard boomed—
Yes. I recall a day. Many days.
In the yard. The green and the gray.
The sun and the wind. Singing leaves to light.
A bird, a tree, a war.
He was there. The me
of me to come, memory-bound,
unknowing, yet of yets,
conjuring a self that did not come,
as I call spirits from the vasty deep.
Peace, piece. Summoned,
thou art there. The imaged word,
Hart, pussywillows anchored in its glow—
no farewells and unbetrayable—
you were right—
for there in the catyard—boom,
blooming, boomed—they grew,
were growing, grow.

Child, I have come.
I bring, beneath the indulgence
of self and words, the love learned late,
the places drained of hate,
the extra reels of seeing.
Piece by piece, yet by yet,
I affirm what I affirm by denying
what I do not, negative man
of a thousand selves betrayed.
I have a center,
a place as still as a windless,
birdless, bugless day
without clouds.
And it is from this place
that I see you—

In the catyard last when bloomed the pussywillows
walked I backward into my arms.
Yet.
Coming I have gone
and going will I be. Yet.
Madre de Firesong, Padre de Darkness,
walking is how I see myself,
always on hills or wet pavement,
city by night, country by day,
with no desire to rest,
hopefully conjured, always wondering,
never knowing, beginnings for endings
and vice-versa, piece-
meal, yet growing, like morning
or evening shadow. Some you,
in the pussywillowed yard of cats,
farewell me not,
but color, anchor me walking.

Within are we all.
Slowly ourselves assemble we,
lacking accompanying thought,
singing stars to sinking, citying the sea,
we blood and bone about us,
pump spirit, populate the dimness
with past’s suns’ flicker, ray, day . . .

I hang my yets on the catyard gate,
booming where pussywillows
last in the backward-turned time
evolved their reply,
whose accent denies my good-bye:
Yet, yet and yet. And I walk
singing not praise
but wonder,
part apart;
imagined cats dance at my heels,
at least as important, ever yet equally wise.

April Shadows by V. C. Andrews
Adrift on the Sea of Rains (Apollo Quartet) by Sales, Ian
PsyCop 4: Secrets by Jordan Castillo Price
Urban Assassin by Jim Eldridge
An Astronaut's Life by Sonja Dechian
The Gate to Everything (Once Upon a Dare Book 1) by Ava Miles
The Orange Eats Creeps by Krilanovich, Grace
No Way Out by Joel Goldman
Rainey's Christmas Miracle by R. E. Bradshaw
Highland Flame (Highland Brides) by Greiman, Lois
Our partner