Read When to Rob a Bank: ...And 131 More Warped Suggestions and Well-Intended Rants Online

When to Rob a Bank: ...And 131 More Warped Suggestions and Well-Intended Rants 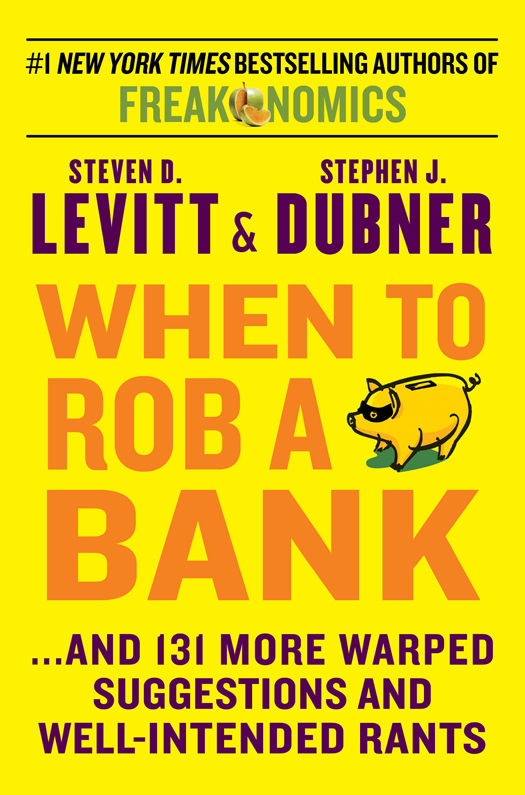 We dedicate this book to our readers.

We are perpetually wowed by your vigor and

grateful for your attention.

Contents
What Do Blogs and Bottled Water Have in Common?

Ten years ago, as we were about to publish a book called
Freakonomics,
we decided to start a companion website. It was called, unimaginatively, Freakonomics.com. The site happened to offer a blogging function.

Levitt, who is always a few years behind, had never heard of a blog, much less read or written one. Dubner explained the idea. Levitt remained unconvinced.

“Let’s just give it a try,” Dubner said. It was so early in our partnership that Levitt hadn’t yet come to understand that those six words were Dubner’s way of getting him to do all sorts of things he never intended to do.

So we gave the blog a try. Here’s the first post we wrote:

Every parent thinks he has the most beautiful baby in the world. Evolution, it seems, has molded our brains so that if you stare at your own baby’s face day after day after day, it starts to look beautiful. When other people’s children have food clotted on their faces, it looks disgusting; with your own kid, it’s somehow endearing.

Well, we’ve been staring at the
Freakonomics
manuscript so much that it now looks beautiful to us—warts, clotted food, and all. So we started to think that maybe some people would actually want to read it, and after reading it, might even want to express their opinions about it. Thus, the birth of this website. We hope it’s a happy (or at least happily contentious) home for some time to come.

And it
has
been a happy home! Our blog writing tends to be more casual, more personal, more opinionated than how we write our books; we are just as likely to float a question as to give a concrete answer. We’ve written things we only thought halfway through and later regretted. We’ve written things we
did
think through but also later regretted. But mostly, having the blog gave us good reason to stay curious and open about the world.

Unlike that first post, the vast majority of the blog entries were written by just one of us, not the pair, as in our book writing. We sometimes asked friends (and even enemies) to write for the blog; we’ve held “quorums” (asking a bunch of smart people to answer a tough question) and Q&As (with people like Daniel Kahneman and a high-end call girl named Allie). For several years,
The New York Times
hosted the blog, which gave it a veneer of legitimacy that wasn’t quite warranted. But the
Times
eventually came to its senses and sent us off to do the thing we do, once more on our lonesome.

All these years, we routinely asked ourselves why we kept blogging. There was no obvious answer. It didn’t pay; there wasn’t any evidence the blog helped sell more copies of our books. In fact it may have cannibalized sales, since every day we were giving away our writing. But over time we realized why we kept at it: our readers liked reading the blog, and we loved our readers. Their curiosity and ingenuity and especially their playfulness have kept us at it, and in the pages to follow you will see ample evidence of their spirit.

Occasionally a reader would suggest that we turn our blog writing into a book. This struck us as a colossally dumb idea—until, one day not long ago, it didn’t. What changed? Dubner was dropping off one of his kids at summer camp in Maine. In the middle of nowhere, they came upon a huge Poland Spring water-bottling plant. Having grown up in the middle of nowhere himself, Dubner had always thought it strange that so many people would pay good money for a
bottle of water. And yet they do, to the tune of roughly $100 billion a year.

Suddenly a book of blog posts didn’t seem so dumb. So in the tradition of Poland Spring, Evian, and other hydro-geniuses, we’ve decided to bottle something that was freely available and charge you money for it.

To be fair, we did go to the trouble of reading through the whole blog and picking out the best material. (It was gratifying to find that among eight thousand mostly mediocre posts, we actually had some good ones.) We edited and updated the posts as necessary, arranging them into chapters that make book sense. Chapter One, for instance, “We Were Only Trying to Help,” addresses the abolition of academic tenure, alternatives to democracy, and how to think like a terrorist. “Limberhand the Masturbator and the Perils of Wayne” is about names that are strange, fitting, or strangely fitting. “When You’re a Jet . . .” shows that once you start thinking like an economist, it’s hard to turn it off—whether the subject is baby formula, animated films, or rancid chicken. Along the way, you will learn more than you ever wanted to know about our personal obsessions like golf, gambling, and the dreaded penny.

It has given us gargantuan pleasure over the years to put our warped thoughts into writing. We hope you enjoy peeking inside our heads to see what it’s like to view the world through Freakonomics-colored glasses.

Death By Dangerous
Scorpion Deception by Andrew Kaplan
Binocular Vision: New & Selected Stories by Pearlman, Edith
Dragon Down by Casey Knight
The Ghost in the Machine by Arthur Koestler
The Channel (The Gifted Book 2) by C. L. McCourt
A Coursing Passage (A Life of Magic Book 3) by Matthew Mitchell
The Boss Vol. 3: a Hot Billionaire Romance by Quinn, Cari, Elliott, Taryn
Soulceress (The Mythean Arcana Series Book 2) by Hall, Linsey
The Reluctant Bride by Kathryn Alexander
Our partner