Read Where She Belongs Online 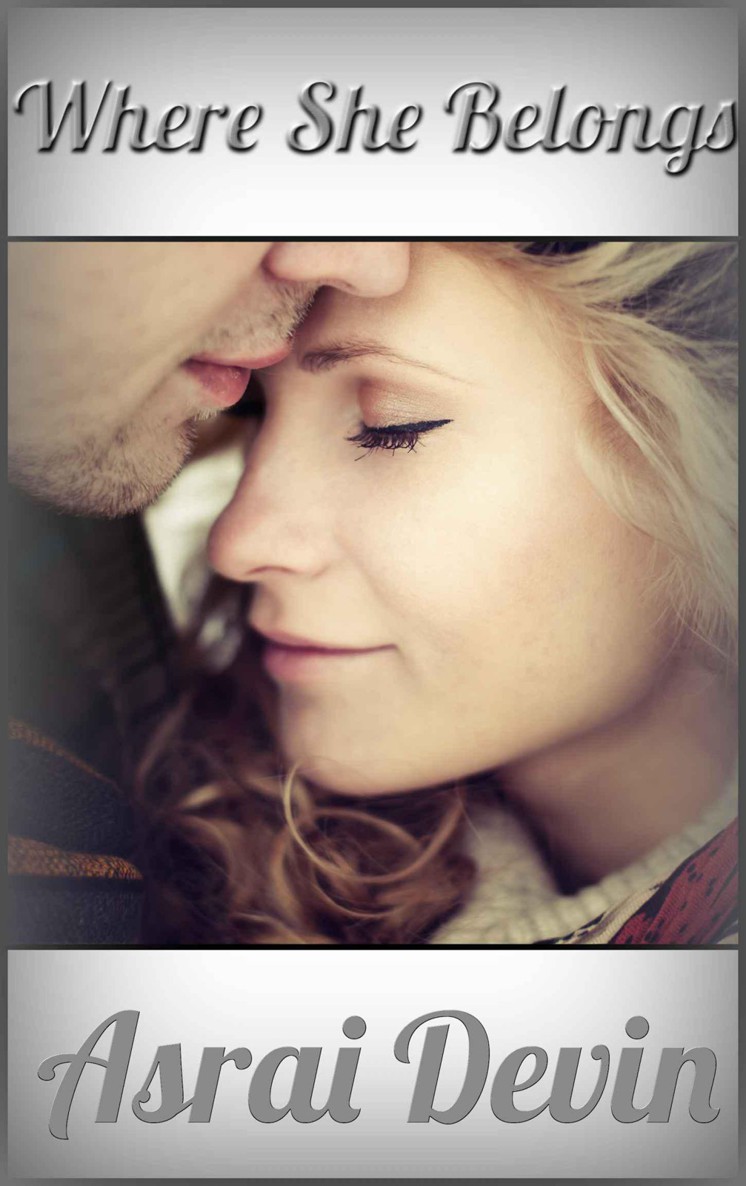 This
ebook is licensed for your personal enjoyment only. This ebook may
not be re-sold or given away to other people. If you would like to
share this book with another person, please purchase an additional
copy for each recipient. If you’re reading this book and did
not purchase it, or it was not purchased for your use only, then
please return to Smashwords.com and purchase your own copy. Thank you
for respecting the hard work of this author.

Shanna
wiped her palms on her pants. What the fuck was she doing here? She
shouldn't be here. She should have said good-night after dinner
together and let it go there. It was nice of him to call her while he
was in town.

She
was tired of being here. She knew she had an amazing opportunity to
go to one of the best schools in the country. She wondered why she
agreed to go so far from home. She missed familiar surroundings. And
seeing Gabriel Brande brought a piece of that.

God
help her, she even missed him. The way he teased her as a teenager,
helped her with homework, or allowed her to help around the office.
The way he smiled at her which had made her heart flutter. His eyes
were warm and compassionate with a hint of something that she hadn't
understood.

She
understood now. It was part of the reason she went so far away. He
was married, supposed to be starting a family of his own. Except once
she was away, she started talking to him more than ever; weekly,
sometimes more frequently.

Those
eyes were staring at her now. He had opened the door. He had probably
even said something.

"Pardon
me, I was lost in thought."

His
surprised expression turned amused. "You always were flighty."

She
wrinkled her nose at him. "And you always were a pain in the
ass."

He
smiled and his hand lifted a little. Then his shoulders dropped. "Did
I forget something at dinner?"

He
hesitated and glanced over his shoulder.

She
backed up. "Maybe I should go, I'll just go home. Forget―"

He
grabbed her wrist and they both froze. Had he felt the same sparks
shoot through him at the contact? He dropped her arm at the same time
she tried to pull away. "It's okay. I have papers spread on
every surface. And well... you are my boss' daughter― coming
into my room unsupervised. If your father ever found out ..."

"I
won't tell him if you don't. At least this part." She stepped
past him, her back brushing against his chest as she barged into his
room. She felt him tense as she did so. Crappy. He was going to think
she did that on purpose. Well, maybe not. "Sorry," she
murmured.

His
hand skimmed her lower back and he let the door fall shut. "It's
fine."

He
had his eyes closed and she wanted to sigh. She was really screwing
this up.

He
followed her into the main part of the room. “Give me a
moment," he said. He hadn't been kidding, he did have papers
everywhere. The television was on the news channel, but it was turned
so low, one could barely hear it. "I can't work in total quiet.
I'm used to the buzz of the office and factory." He stacked the
papers with care, moved them to the end table, then gestured to the
now empty sofa. "There you go, have a seat. I'd offer you a
drink, but all I have is ice water in a dirty cup."

"I
was going to clean off the chair for me."

He
nodded, his jaw visibly clenched. He sat beside her, the fingers of
his left hand curled over the arm of the sofa. "Tell me what's
wrong."

"No
small talk then?" She tipped her head and focused her eyes on
his hand.

"We
did small talk at supper, and you said all was fine. You were passing
your classes, you were making friends."

"I
have some friends, yes. Classes are going well." She worked her
mouth as she searched for the right words. "I miss home. I'm far
away and there's not a break for another couple weeks. I'm lonely
here."

"What
about your friends?"

"Study
groups, mainly. But not like my friends from home. People I've known
my entire life."

He
leaned back into the couch. "And the new schedule of short
classes and long study sessions is tiring."

She
nodded. "I'm feeling homesick I know. I'll get over it. But you
came and I was longing for a little more home while I could."
She swallowed hard.

He
smiled and patted her hand. "It's okay, Shanna. We can visit for
a while. I can't fill you in on town gossip, as I don't pay much
attention. But we can talk shop."

She
smiled and grabbed his hand. "I think you do know the local
gossip. I bet you are down at the coffee shop, eavesdropping like an
old biddy."

He
shook his head, but smiled at her. "Yes, well, you always knew
my weaknesses. I've started playing Friday night bingo as well."

She
squeezed his hand, wishing she could cuddle into his arms and feel
safe. She hadn’t hugged someone in a long, long time.
"Excellent. Settling into middle-age nicely then."

He
gaped at her open-mouthed. "I'm not that old, brat." He
pulled his hand from hers and tweaked her nose.

"I'm
no longer a brat, old man." She moved back a little and readied
herself to dodge another nose tweak.

He
gathered her wrists into one hand, imprisoning her. While she
struggled to get free, he tickled her stomach until she giggled while
screeching for him to cease the attack. He joined in her laughter.
"Mercy, uncle, mercy, Gabe, please, mercy."

He
stopped and dropped her hands. She fell into him.

He
tensed. "I'm only stopping because I don't want to get a noise
complaint from your screaming."

"That
was mean. She stuck her lower lip out as she stared up at him.

He
put his arms around her. "Will this make it better?"

She
snuggled into his warmth. "Yes. I haven't had a hug in weeks,
not since I flew out here after Christmas." She sighed and her
breath moved his hair behind his ear.

He
grunted as he shifted her and she found herself staring into his
face. Her heart skipped a beat as she looked up at him again. She'd
always thought he was handsome, always had a crush on him. Until
tonight, she’d always felt like an awkward teenager¨–
and he’d been married the last two years.

Except,
he wasn’t married now. He wasn’t divorced yet, but his
wife Lisa the Bitch, had left him a month ago. Her mother kept her
informed with any and all news from home. She asked Gabe about it
over dinner, but it was still a sore point. The bitch only moved out
this week. Shanna had dropped the topic quickly. She always hated
Lisa. Jealousy.

But
now sitting beside her, looking down at her, his fingers stroked her
cheek. He bent his head and his breath puffed against her face
gently, then caressed while he spoke. "You should not be without
hugs." He smiled at his double negative.

She
reached up and touched the stubble on his chin. "I forgot what
it was like when you relax. The last year or so, you've gotten so
serious."

"I've
been given a lot more responsibility in the plant. I need to show
your father I’m capable of handling that at all times."

"You
would have to destroy the whole thing to disappoint my father. He
adores you. He wishes I was you. Sometimes I don’t love the
family business as much as everyone thinks. Sometimes, I think I'd
rather go out on my own, build things from the ground up." Her
confession rushed out of her. She ducked her head, hoping he wouldn’t
judge her too harshly.

"You
wouldn't want to take over your family legacy?"

"I don't love the
business. I know it's important to the town, to the family. But I
don't
love
it like he does. I want to make something of my own
to love." She traced his lips with her index finger.

"You're
playing with fire, Shanna," he said, trying to make her sit up.

She
sat up with his help, then turned over and straddled his legs. She
put one hand on his shoulder to steady herself, the other she trailed
over his cheekbones. Then she brushed the stubble on his chin again.
"Anything you do won't leave this room."

He
turned his head and captured one finger in his mouth. First he sucked
with gentle pressure, then he bathed it with his tongue until her
breath caught in her throat. "You're teasing a frustrated man."

"Would
you like it to be more than teasing?" She didn't give him a
chance to respond. She swept his lips up into a firm kiss. Her kiss
was merely her placing her lips against his. She heard the tick of
her watch as she waited for him to respond.

He
buried a hand in her blonde hair on the back of her head and pulled
her close. He forced her lips open. His tongue stabbed in to search
and lay claim to her mouth. It was a take-no-prisoner's kiss. She
wrapped her arms around his neck and kissed him back. Her tongue
sparred with his, both of them seeking the unknown delights of the
other's mouth.

He
took the pressure off her head, sure that she wouldn't turn away, and
he caressed her shoulders. She then slid down her chest. Her nipples
perked up at the gentle tease, and instantly sent shots of desire
through her body, centering in her core. He slid his hands over her
breasts and pinched her nipples, pulling the buds away from her body.

She
pulled from his mouth with a gasp and pressed heated kisses on his
neck. "Gabriel," she whispered. "Gabe." He
smelled as she remembered in her teenage years, he still wore the
same cologne after all these years. Every time she’d
encountered the scent in passing, he’d come to the forefront of
her mind.

"What
are you doing to me?" he asked.

She
could feel his arousal pressing up through his pants against her soft
vee between her legs where their bodies fit together.

"Pleasuring
you," she whispered.

His
fingers plucking at her nipple once more and came to rest on her
shoulder. "My self-control is at it's breaking, Shanna. I have
to stop."

"I
can't touch you any further. No more. I have to walk away, or I'll
end up making love to you. Then I'll have to quit working for your
father."

"Why
would you do something like that? He would never,
never
know
what happened between us."

"I
couldn't face your father with that sort of secret between us. I'd
have to quit or tell him the truth and he would kick my ass across
the country. And I would be deserving."

The Flight of the Eisenstein by James Swallow
Smoke Mountain by Erin Hunter
Splendor and Darkness (Rebel Angels) by Friberg, Cyndi
The Rivals by Joan Johnston
BEAUTY and the BILLIONAIRE (Part One) by Glenna Sinclair
Puerto humano by John Ajvide Lindqvist
Taking a Chance by KC Ann Wright
The Initiation by Ridley Pearson
Breathing Fire (Heretic Daughters) by Lilley, Rebecca K.
Kiss of the Dragon by Christina James
Our partner