Where Southern Cross the Dog 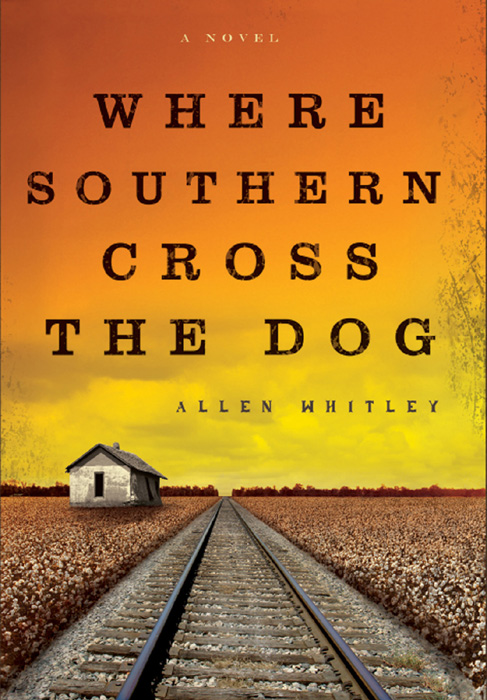 WHERE
SOUTHERN
CROSS
THE DOG

This book is a work of fiction. Names, characters, businesses, organizations, places, events, and incidents are either a product of the author's imagination or are used fictitiously. Any resemblance to actual persons, living or dead, events, or locales is entirely coincidental.

To those blues musicians and singers who took the hollers from the cotton fields and created America's greatest art form, bestowed upon us the imagery of history and culture in their lyrics, and taught us how much fun we could have on a Saturday night.

For me, this work of Southern fiction would never have been complete without the complement of music. The blues is such an integral part of the spirit of Mississippi that I was bound to share its powerful message that I have been fortunate to experience.

In the back of this book you will find a CD of recordings (also available to download at www.allenwhitley.com), most of which have never been heard except by a handful of people who knew the artist. With Jim O'Neal, noted blues researcher, at the helm, we journeyed down the road of discovery and relished in the findings for this compilation. The tracks, most of which were recorded near Clarksdale, Mississippi, in the early 1940s, include prison work songs, oral history narrations, and a few songs with very little instrumental accompaniment.

Listen, at least once, knowing that you've heard something that is pure and newly rediscovered, and that until our voices join theirs, we will always have occasion to sing the blues.

Here is a listing of the tracks:

I HAVE MANY PEOPLE TO THANK FOR ASSISTING ME along a journey where the lessons were discovered during the voyage, not at the destination.

First, thanks to the following people who provided resources, information, connections, and such: Dean Blackwood, who always took my calls and provided names and contacts of people who were invaluable to the project. Ed Komara, a wonderful resource at The State University of New York at Potsdam who was instrumental in recommending Eric Sackheim's
The Blues Line: Blues Lyrics from Leadbelly to Muddy Waters
and Michael Taft's
Talkin' to Myself: Blues Lyrics, 1921â1942
. I took the chapter-opening epigraphs mainly from these two sources, attributing some lyrics to the actual writer and other lyrics to the artist who recorded the song. Ed Young, founder of AGStockUSA, Inc., and photographer
Bill Barksdale, who provided what turned out to be an incomparable cover photo. Jeff Sayers, Mississippi born and raised, who reestablished distant relationships for my benefit.

A special thanks to Jim O'Neal, founder of
Living Blues
magazine, who was responsible for finding the wonderful music, narrations, and work songs accompanying this book. Without the music, this project is only half done.

A big round of thanks to the Greenleaf Book Group's production and consultation team: Matthew Donnelley, Neil Gonzalez, Justin Branch, Alan Grimes, Chris McRay, Theresa Reding, and Katie Steigman, who brought the concept to Greenleaf. Their professionalism was refreshing and much appreciated.

Special thanks to my editors, each of whom provided unique perspectives and worked tirelessly to help me craft what I meant and not what I wrote: Mindy Reed, Jerry Davis, Susan Figliulo, Jay Hodges, and Linda O'Doughda, my sponsor into the mutual admiration society.

Thanks to Kevin Chapman, astute attorney, rancher, and friend, who provided insights and guidance into the intricacies of legal procedure and kept me within the confines of reasonable legal behavior.

I'd like to express a sincere indebtedness to Don and Marcus Brown, who reduced my degrees of separation from Katie, someone who understood and cared about my vision.

Writing is a terribly selfish pursuit. Alone and away from distractions, the cocooned author creates an imagined world that plays out all around him and temporarily substitutes for the real one. There are no actual casualties of the flesh, but there are sacrifices all must bear. Time spent mulling over fabricated lives is never recovered, and those lost moments of connection and closeness are forever abandoned. Once again, my selfishness has stolen what cannot be reclaimed. No penance to amend the sin of forsaking. To those I've neglectedâloving wife, faithful daughters, supportive mother, and generous father: Kathi, Kara, Emma, Arline, and GeorgeâI can only offer my sincerest gratitude and love.

No power on earth dares to make war upon it.
Cotton is king!

THE ROADâA COMMON MIXTURE OF PACKED REDDISH clay, pebbles, and stones, dry and sharpâstretched out in front of Travis Montgomery for what seemed like a hundred miles. The breeze stirred gently that afternoon in mid-August, 1938, just enough to lift the top layer of dust off the road and into Travis's face. The grit stuck to his skin and intensified his thirst as the blistering sun beat down on him.

An old farmhand had once told Travis that when he was thirsty, he should place a pebble or a piece of clay in his mouth, like chewin' tobacco, until his craving subsided. Travis had tried it several times, but having swallowed a small wad of clay on the last try, he decided
to forego the practice. Now he stared at a pebble in the road and tried to imagine it quenching his thirst. Remembering his resolution, however, he stepped squarely on it as he continued his journey.

Travis looked at the fields bordering both sides of the road, where row upon row of white-tipped cotton plants grew. To the twenty-one-year-old who had never left Mississippi, the patchwork landscape of brown and white looked like pictures he had seen of springtime in New England, when retreating snow exposed the earth and rock below. The bulbous plants swayed gently, reminding Travis first of legions of soldiers marching in a parade, and then of jaunty white pom-poms waved by fans at a football game.

What lay before Travis was more than just a crop or a commodity; it was treasure, cared for and cultivated more tenderly than many of the people who lived within a three hundred-mile radius of this very spot. This crop was considered God's greatest creation, and the Lord himself had granted a select few the divine right to cultivate it as they saw fit, often at the expense of all others. Deep down in the Mississippi Delta, this was King Cotton.

In his mind's eye, Travis visualized his journey across the rectangular state: it bordered the Gulf of Mexico at its southern edge, Louisiana and Arkansas to the west, Alabama to the east, and Tennessee to the north. He could see the foothills in north central Mississippi dwindling, like a roller coaster easing into the end of its run, into the productive and provocative Mississippi Delta. Dark, rich land once covered with thick forests was cleared when the earliest settlersâ
his
forebearsârealized the farming potential of the New World's earth. Each time the Mississippi River had overflowed its banks, it deposited yet another layer of soil throughout the Delta, increasing the land's fruitfulness. Twenty years after the War Between the States ended, the Mississippi's waters were at last tamed by leveesâlong mounds of dirt piled high upon the riverbanksâin hopes that they would impose some genteel Southern manners upon the unruly
river. The Delta became an agricultural holy land, a fertile mecca stretching to the horizon.

Geographers, historians, and cartographers might delineate the Delta as the oval-shape “island,” 250 miles long, between Memphis and Vicksburg. But Travis knew what book learning could never impart: The Delta didn't exist merely in geography, an area defined by landmass within natural borders. No, the Delta existed somewhere a little more obscure. More than a place, the Delta was a spirit.

For the past four years, Travis had been attending Millsaps College in Jackson, about 150 miles south of Clarksdale, a town founded in 1848 and nestled near the head of the Sunflower River's deeper waters. Each time he returned home, the serenity of the Delta overcame him anew. Even with his eyes closed he was always able to tell that he was home.

The sun was beginning its descent when Travis heard the familiar rumble of a truck carrying cotton pickers headed north toward Clarksdale. Travis stuck out his thumb, hoping for a ride. The truck's brakes squealed; it slowed to a stop, and Travis ran up along the driver's side and put a foot on the running board.

“Yeah, boy,” the driver said, never taking his eyes off the road before him. A cigarette dangled from his lips, and he pulled it out and flicked it past Travis's head. “But you're going in back, with the darkies.”

Travis clenched his fist and felt his nails dig into his palm. He wiped the stinging sweat from his eyes and looked past the driver. Another man sat motionless in the front seat. They could have made room, but Travis wasn't going to argue. He smiled his appreciation and climbed onto the truck's bed.

Lonely Road by Nevil Shute
To Wed and Protect by Carla Cassidy
Bastial Sentinels (The Rhythm of Rivalry: Book 5) by Narro, B.T.
Christmas for Ransom by Tanya Hanson
The Maintainance of Headway (1987) by Magnus Mills
Slocum and the Glitter Girls at Gravel Gulch (9781101619513) by Logan, Jake
One True Thing by Anna Quindlen
Unbeautifully by Madeline Sheehan
The Fly Boys by T. E. Cruise
Pinstripes by Faith Bleasdale
Our partner