Read While Other People Sleep Online

While Other People Sleep 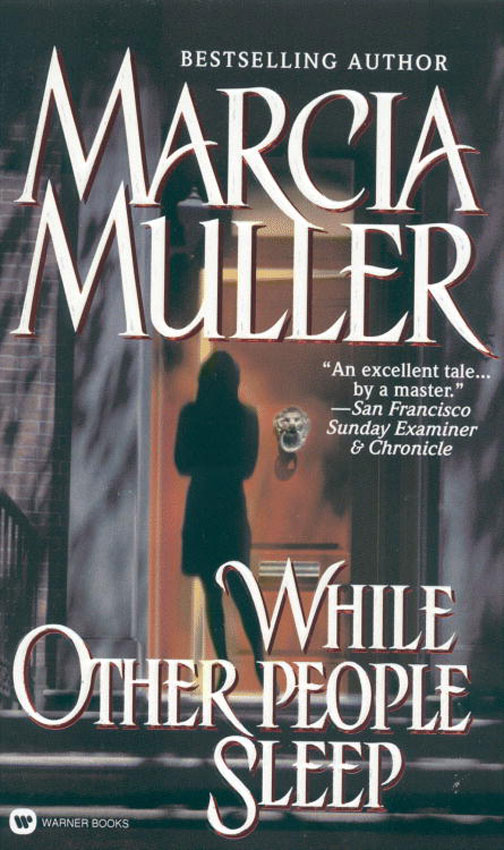 This is book is a work of fiction. Names, characters, places and incidents are either the product of the author's imagination or are used fictitiously, and any resemblance to actual persons, living or dead, events, or locales is entirely coincidental.

Copyright © 1998 by the Pronzini-Muller Family Trust

Preview for A Walk Through The Fire

The groundbreaking, long-running Sharon McCone mystery series, now over two decades old, has seen the intriguingly complex McCone evolve dramatically. Beginning as a ‘70s idealistic crime fighter, she has become a formidable, battle-tested veteran who has not lost her passion for justice. Now in the newest book in the series, McCone faces a frightening midlife crisis that will truly test her mettle. With her very identity at stake, she confronts an enemy who invades her privacy, disturbs her mind, and threatens to destroy her life.

“An excellent private-eye tale structured by a master of the form … moves smoothly and entertainingly from the first whiff of plot to the big finale.”

“A riveting tale…. [Muller is] a first-rate storyteller.”

“A fascinating novel that goes far beyond the range of most detective tales…. Muller has been turning out engrossing novels featuring an intelligent, maturing detective for two decades and shows no signs of slowing down.”

“Muller creates an agonizing puzzle … a plot enlivened by twists and counter-twists.”

“Evocative … one of the treasures of the genre.”

“Poignancy, page-turning action, and a standout cast … [an] outstanding series.”

“Muller's novels are models of thoughtful plotting and rich characterization.”

“The reigning queen of the female P.I. genre.”

“One of the best mysteries of the genre.”

“Fast-paced and exciting. … McCone is a great female detective.”

“Sharon McCone is the new breed of American woman detective … redefining the mystery genre by applying different sensibilities and values to it.”

“Reading the McCone novels in order, one can track the astounding literary growth of author Marcia Muller as she hones her skills to scalpel sharpness. … A prime example of just how good the noir novel can be.”

“Marcia Muller launched the present wave of women writing about women as sleuths with Sharon McCone in 1977 … [and] quietly keeps getting better and better.”

“One of the most popular female heroines in the genre.”

“Pace and plotting are very strong, but it's her characters—especially McCone—who will lure you back.”

“Muller has gotten quietly, steadily better. She is building up steam, not running out of it.”

WHILE OTHER PEOPLE SLEEP

BOTH ENDS OF THE NIGHT

A WILD AND LONELY PLACE

TILL THE BUTCHERS CUT HIM DOWN

WOLF IN THE SHADOWS

PENNIES ON A DEAD WOMAN’S EYES

THE SHAPE OF DREAD

THERE’S SOMETHING IN A SUNDAY

EYE OF THE STORM

THERE’S NOTHING TO BE AFRAID OF

LEAVE A MESSAGE FOR WILLIE

GAMES TO KEEP THE DARK AWAY

ASK THE CARDS A QUESTION

EDWIN OF THE IRON SHOES

For the Mourants:
Tom, who won’t read it
,
Teresa, who will
,
Kirsten, who might
,
Camille, who might when she's old enough.
And also for Patty and Walt.

Peggy Bakker, CFI, for her flying wisdom and expertise

Jan Grape, for her Texas-isms

Tim Talamantes, for the story that inspired McCone's nineteenth case

Melissa Ward, for her help, research, and sympathetic ear

And, of course, to Bill, for everything

T
he hours while other people sleep are the longest for me, and the most uneasy. All that's familiar adopts a vaguely menacing disguise, and the landscape of my life alters. Demons walk beside me, in the form of old regrets and guilts. I'm cut off from those I love. Whether at home and plagued by insomnia or on a long surveillance, I watch the clock and will its hands to move more swiftly toward the time when the darkness will lift and life will once again return to the safe and mundane. But the hands creep slowly, and I'm forced to face what I keep hidden inside.

I'm not as honest as I used to be, and my ethics are eroding.

I'm not as brave as I pretend to be.

The list goes on, then replays in an endless loop as I wait out the night. I feel threatened, but not by anything external.

During the hours while other people sleep, the threat always comes from within.

A
t 11:37
P.M.
the interior of Pier 24½ lay in darkness broken only by a few badly placed security lights. The air was cold and damp, redolent of brine and creosote. Rain hammered the flat roof, and directly above it on the span of the San Francisco-Oakland Bay Bridge, a truck's gears ground. Another vehicle backfired, sounding like gunshots.

I paused on the iron catwalk outside my office, watching and listening, my senses sharpened as they always were when I worked alone here at night. The old pier's security was easily breached, there were many places for an intruder to hide, and the waterfront, while undergoing a renaissance these days, was still a potentially dangerous place. Given the right combination of circumstances, most places in this city could be dangerous.

No one was visible on the catwalks that crossed over to the opposite suites of offices; no light seeped through the cracks around the doors. The ironwork threw an intricate pattern of shadows on the concrete floor below, where we tenants parked our cars. After a moment I moved along the catwalk toward the office of Ted Smalley, the efficient and somewhat dictatorial man who keeps both my agency and Altman & Zahn, Attorneys-at-Law, functioning smoothly. The sound of my footsteps echoed off the high ceiling and exposed girders. A sudden rush of air, and something flew at my head. Reflexively I threw up an arm; my fingers grazed thin membrane and bone.

Heart pounding, I ran into Ted's office, slammed the door, and leaned against it, clutching the files I carried.

“McCone,” I gasped aloud, “you've faced down armed criminals without blinking. Why the hell're you running from a little bat that's probably cowering in the rafters by now?”

I knew the answer, of course: the encounter with the bat had tapped into my old phobia of birds—one I thought I'd long before conquered. Apparently not, though, at least not when I was already nursing a low-level depression and edginess, brought on by the wet and stormy weather that had persisted with scarcely a break since the day after Christmas.

A low-wattage lamp burned on Ted's desk. I used its light to scribble a note, which I then stuffed under the rubber band holding the files together. They contained job applications, background checks, and turndown letters for three candidates I'd recently interviewed. Two of the applicants had been excellent, and my note to Ted asked that he keep the files active, but early last week my friend Craig Morland had finally accepted the position I'd offered him last December. Craig, a former FBI field agent, was just the man McCone Investigations needed; his connections from fifteen-plus years with the Bureau had already proved invaluable to me.

Back on the catwalk, I strode fearlessly toward the stairway. No bat was going to intimidate
me.

I froze at the top of the stairway, trying to pinpoint the source of the shout, then dropped down behind the railing and peered through it.

“Hey, Sharon, how come you're hiding from me?”

I let my breath out slowly, recognizing the Australian accent of Glenna Stanleigh, a documentary filmmaker who rented the ground-floor suite next to the pier's entrance. Feeling both foolish and angry, I straightened.

“For God's sake, Glenna! I damn near died of fright.”

“You? No way.” She came out from behind her Ford Bronco—a petite woman with long, light brown curls and huge, lamplike gray eyes. “Seriously, I
am
sorry. I wasn't thinking.”

“No permanent harm done.” I started down.

“I wouldn't’ve shouted like that,” Glenna added, “but I've been anxious to see you. To tell you about a bizarre experience I had last weekend.”

She nodded, looking exceptionally solemn for one with a perpetually sunny disposition. When I first met Glenna, I'd found her cheeriness suspect; nobody could possibly be that upbeat—to say nothing of that nice—all the time. But as I got to know her better I realized how genuine she was, and we became friends of a sort. I often sought her out when I was feeling low, and this past rainy month I'd spent a fair amount of time drinking tea with her in her office.