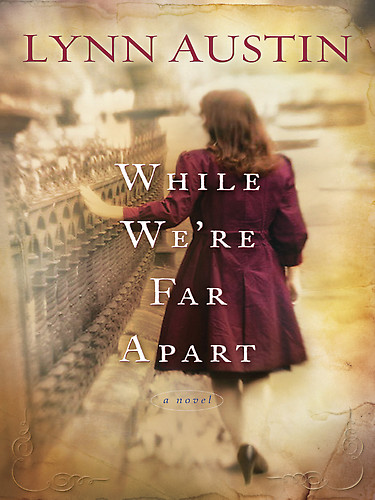 To my mom, Virginia,
a WWII nurse who saved all of her scrapbooks for me.

To my dad, Paul,
who served in the U.S. Navy in the Pacific during WWII.

And to Yaacov and Miriam,
who survived the holocaust in Hungary
and became part of our family.

Thank you for your legacy of courage and faith.

May the Lord keep watch between you and
me when we are away from each other.
Genesis 31:49
NIV

E
STHER’S FATHER HALTED
the lazy swaying of the porch swing. “Listen,” he said. “There’s something I need to tell all of you.” The darkness in his voice made Esther’s skin prickle. He had used the same phrase, the same tone, when he’d told her that Mama had gone to live up in heaven.

“I’ve been thinking . . .” He paused, kneading his forehead as if his head hurt. He looked so sad. Esther wished she knew how to make him smile again.

They had walked to Grandma Shaffer’s house for lunch after church, and Daddy had barely spoken all afternoon. But that wasn’t unusual. Grandma had filled the long silences with news about Uncle Steve, who was fighting the Japanese, and Uncle Joe, who was being shipped off to North Africa soon. Grandma’s next-door neighbor, Penny Goodrich, had come over to sit on the porch, too, and they had all watched Esther’s brother, Peter, chase Grandma’s dog around the backyard. It had been such a pleasant afternoon – until now.

He paused once again, and the air went still as if the breeze had hushed to listen. Woofer finally stopped barking, and even the traffic on Brooklyn Boulevard a few blocks away seemed to have halted.

“What is it, Eddie?” Grandma asked. “You look so serious. You feeling all right?”

“I said, I’m going to enlist in the army.” He spoke louder this time because Grandma was hard of hearing, but Esther could tell that she had heard him plain enough the first time.

Esther hugged her skinny arms to her chest, feeling a chill. At age twelve, she was old enough to know exactly what “enlist” meant. She listened to the news reports about the war on the radio every night. She watched the newsreels at Loew’s Brooklyn Theater before the Saturday matinee started. Oh yes. She knew it meant that her daddy would go far away like her two uncles had – and that he might never come back. The afternoon felt ten degrees colder, as if the sun had gone behind a cloud.

“Saints above, Eddie!” Grandma shouted. “Are you out of your mind? You can’t enlist! You have two children to think about. Who’s going to take care of them?”

Grandma gave his shoulder a shove. “And what if you don’t come back? Huh? What then? What if you end up at the bottom of the Pacific Ocean like Millie Barker’s son? Then what? You want these poor children to be orphans?”

Esther understood the finality of death. She knew she would never see Mama again until she died and went to heaven herself. She also knew that lots of men were being killed in the war. Grandma had hung a little flag in her window with two stars on it, one for Uncle Joe and one for Uncle Steve, and she had explained to Esther why Mrs. Barker across the street now had a flag in her window with a gold star.

Esther wanted to cry and beg Daddy not to go, but she didn’t want to make him angry. The love they shared felt as fragile as spider webs, and Esther was never quite certain that she had his attention, let alone his affection. Sometimes it seemed as though Daddy wasn’t home even when he was. She decided to let Grandma argue with him.

“You don’t think soldiers are dying in the army, too? On land?”

“Listen, I was hoping Esther and Peter could live here with you until I get back.”

Grandma stared at Daddy with her mouth open as if she was about to take a bite out of something. Esther tried to imagine living here, and it made her stomach hurt. Grandma had so many rules like “don’t leave the door open or the dog will get out,” and “don’t bother my parakeet,” and “don’t make noise because it will disturb the next-door neighbors,” and “don’t touch my stuff” – which lay heaped in piles everywhere. Esther didn’t mind visiting on Sunday, but by the time she and Daddy and Peter boarded the crosstown bus for home, she always felt as though she had been holding her breath for three hours.

“How can they live here?” Grandma asked Daddy. “What about school? Did you consider that? They would have to change to a different school if they lived with me. Besides, there’s no room for them in this house.”

“What do you mean there’s no room? You and Pop raised three boys here.” But Esther had always wondered how Daddy and her uncles had ever fit. Grandma kept things that most people threw into the trash – piles and piles of things that made it hard to move around from room to room.

“That was years ago, Eddie. Your bunk beds are long gone, and I’m using that room for my own things now. I wouldn’t know where to begin to clear everything out. And what would I do with it all?”

“You could always move into our apartment.”

“What about my dog, huh? And my bird? They don’t allow pets where you live. Besides, your apartment has too many stairs to climb.”

“No, you listen. I love Peter and Esther, you know I do. . . .” Grandma tossed the comment in Esther’s direction like a foul ball at a baseball game. It sounded great when it smacked against the bat, but in the end, it didn’t count for anything.

“But saints above, Eddie, I’m too old to raise children! Helping with homework and worrying about measles and chicken pox . . . It’s too much! They would be too much for me to handle all day and all night. Let somebody else fight the Nazis. You’re thirty-three years old, for heaven’s sake. You have responsibilities here at home.”

Esther looked up at Daddy to see if Grandma’s arguments had convinced him, but the expression she saw on his face sent another chill through her. His lips had turned white and he seemed to be holding his breath. Grandma must have noticed it, too. “What? What’s wrong?” she asked him.

“It’s too late. I already enlisted.”

“You – what!” Grandma exploded like a shaken soda bottle, reaching out to cuff Daddy’s ear as if he were a little boy. “Why would you do such a stupid thing? Of all the irresponsible . . . idiotic . . .”

“Listen to me, Ma. I can’t go on the way I have been. I just can’t.” His voice sounded as cold and frosty as a metal ice cube tray, straight out of the freezer. “There are too many reminders of her. Too many things that will never be the same. Rachel is everywhere in that apartment – and yet she isn’t.”

“Then get another apartment, for crying out loud. You don’t have to go off and fight a war if you need a change. Start all over again someplace else. New York is a big city, you know. Brooklyn has plenty of other apartments for rent. Your children need you.”

Daddy rubbed his ear where Grandma had cuffed him. “I’m no use to them, Ma. I’m not even a good father, let alone a good mother.”

Esther tried to speak, but her chest hurt the way it had after she fell off the monkey bars at school. She couldn’t draw a breath. She wanted to tell him he
was
a good father. He fixed their meals and listened to ball games on the radio with them at night. He packed their lunch boxes for school every day and helped them study for spelling tests and took them to church on Sunday. The house did seem much too quiet, and he never sang or played the piano the way Mama used to do. And he didn’t tell bedtime stories about people in the Bible, either. They ate a lot of canned soup instead of meat and potatoes, but that didn’t matter to Esther. She just wanted Daddy to stay with them in their own apartment, not go away to war and leave them with Grandma.

She put her hand on his arm as she searched for something to say, but when he turned to her and she saw tears in his eyes, she couldn’t speak. What if she said the wrong thing and he started crying during the night like he did right after Mama died? Esther remembered the terrible, helpless feeling it gave her to hear her father weeping, especially when she couldn’t stop crying herself and there was no one in the whole world to comfort either one of them. Daddy had done his best to console her, but his embraces felt brief and stiff as if he was afraid Esther would break if he hugged her too hard. He was tall and lean, and his callused hands were stained with grease from repairing cars all day. Mama had been soft and warm, and she would hold Esther in her arms for a long, long time.