Read Whill of Agora: Book 02 - A Quest of Kings Online 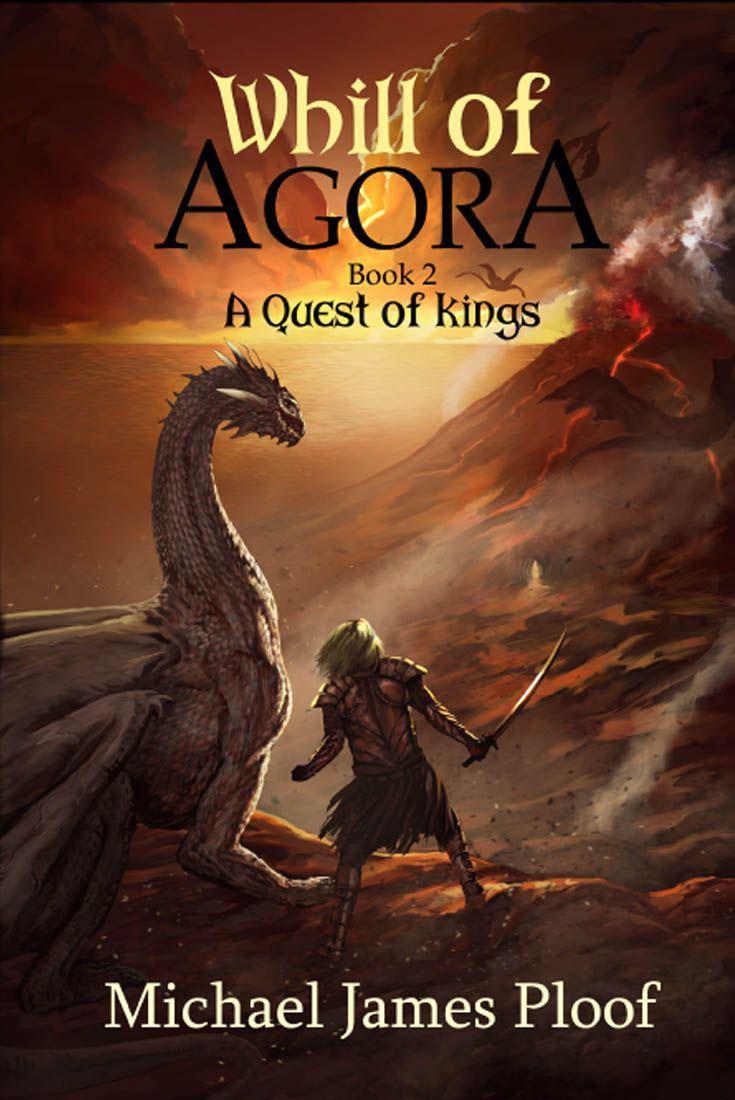 OTHER BOOKS
by Michael James Ploof

This book is dedicated to my wife, Melanie. You are the driving force in my life, and without you, I would not be half the man I have become. You have taught me the value of hard work, the importance of responsibility, and the meaning of true love. You have given me two impossibly amazing children and have made our house a home.

CHAPTER TWO: The Prisoner and the Assassin

CHAPTER SEVEN: An Invitation to Execution

CHAPTER NINE: The Shadow of the Arena

CHAPTER THIRTEEN: Thank Me in the Morning

CHAPTER TWENTY-FIVE: The Gates of Arkron

CHAPTER TWENTY-SIX: The Scepter of Krowlen

CHAPTER TWENTY-NINE: Clues in the Dark

CHAPTER THIRTY: The Ancient One

CHAPTER THIRTY-ONE: The Sword of Power Given

I hope that my letter finds you and finds you well. It has been nearly six long months since the reclamation of the Ro’Sar Mountains and the rise of King Roakore, and though his people now thrive, the world has become dark, and war is now upon us. From the Ro’Sar Mountains poured an army of nearly a hundred thousand Draggard, and they have spread death and destruction throughout the kingdoms. I pray that the dark plague which is Eadon’s Draggard army has not yet reached you in Sidnell.

Whill remains lost to us—a fact that holds captive my heart and burdens my days with worry. I have failed him, and for this, I cannot forgive myself. Would that I could wield power like the Elves and cause my will to be that of the world. But I am merely a man, and as such, I am often powerless against the magic of the Elves, to my great frustration.

Rhunis remains at my side, and together, we search for any sign of Whill within Uthen-Arden. It is my belief
that Eadon holds him captive within the castle of Whill’s late father. I know not whether he still lives, but I must believe that he does. If Whill is dead then we are truly doomed; he and he alone can rid Agora of the evil of Eadon—this I believe with all of my heart. He is a good man, as good as I have ever known. With your help, he has become a man of great strength and virtue, and I thank you wholeheartedly for all you have done.

Eadon has successfully separated the kingdoms of men, Elves, and Dwarves. Like a wedge, he has divided us from one another in his acquisition of Uthen-Arden and Shierdon. Though I have tried to bring them together—man, Dwarf, and Elf—they remain too busy fighting off the hordes within their own lands to come together as a unified army. Even if they could, who would they strike? The human armies of Uthen-Arden and Shierdon are not truly in league with Eadon; they know not for whom they serve. They believe, as they have been told by their kings, that Whill is the master of the Draggard and Dark Elves do not exist. Eadon has even led them to believe that the Elves of Elladrindellia are the enemy.

Eadon wants nothing more than full continental war; it is his very design. It frustrates me to no end to see clearly his plans unfolding, whilst I am not able to gain the ear of our allies. It seems that the best weapon against men is a well-told lie; we are ever the unwitting victims of such fables.

Please send the girls my love. I hope to see you all again one day soon. Until that day, you remain ever in my thoughts.

R
oakore focused his will on the stone. He channeled the energy of the nearby Dwarves and mentally raised the stone slab from its perch at the foot of the mountain. It had already been readied and fixed with great hinges and locks. Once put into place, it would serve as the new door to the Ebony Mountains.

“That is gonna look amazing!” Tarren howled and stomped on the ground as the stone began to be laid into place. A startled Roakore jumped and, for the smallest of moments, let go of the great stone. His face grimaced under the pressure, and a few of his men passed out with the sudden energy sap. The slab was set upon its hinges with a boom. The cranks of the huge wooden pulleys were turned, and the five-foot-long and one-foot-wide bolts were moved into position; they hung from massive chains and were guided by Dwarven
hands. Each of the six bolts slid through the greased hinges and made a soft boom.

Roakore bent and almost fell as he released the door and the great weight was lifted from his mind. “By Ky-Dren’s bloody, dragon-killin’ ax, boy, can ye not be screamin’ when me and me boys ‘r’ up to such work?” he snapped.

The look upon Tarren’s face made Roakore feel bad for his words, and he shook his head. “Bah, ‘n’ ye better be getting tough. Ye saw the raisin’ o’ the main gate. Now be getting on to yer trainin’ with Lunara; ye got a two-hour walk before ye.”

Tarren straightened at Lunara’s name. “Now that is gonna be even more amazin’ than the raisin’ of the doors, it is.” said Tarren, beaming.

Roakore had noticed a few months back that Tarren had begun to pick up Dwarvish during his stay with the Dwarves. He couldn’t help but smile at the lad. Tarren had lived and worked and trained as a Dwarf for the last six months, at his own insistence. Abram had granted the request, as he would be busy with the finding of Whill.

Training with the Dwarf children was hard on the small lad; he was small even for a human. But, to his credit, he was quick on his feet and a fast learner. Lunara healed his daily wounds and breaks and instructed him in combat. He had begun to show much improvement in all aspects of his training, returning to his quarters each night with fewer wounds needing to be healed.

“I’ll escort the lad Tarren to the lady, me king. If it suites ye, that is,” Haldagozz stated as he put a big hand on the boy’s shoulder.

Roakore scowled a bit at that. “End I be wonderin’ which o’ ye be more happy for it, eh, yerself or the boy?” Roakore asked with a raised eyebrow.

Haldagozz howled as if he were putting back a few pints at the tavern o’ the gods. “Bwahaha! The boy, I’m thinkin’. If he didn’t have the lady, he’d be dead by now, I’m bettin’.”

“Ey’, en’ yerself too, no?” asked Roakore. Even as the words slipped his lips, he knew he had gone too far.

Haldagozz took a step toward his king and looked him in the beard. “Ey’, it be true; en’ I allowed the healin’ at yer own word, me king,” a hurt-looking Haldagozz attested. “If I got feelin’s fer her, it ain’t none but respect and gratitude. I’d be in the halls o’ the gods by now if it weren’t for yer words, me king. But they let me stay en’ fight another day, a great gift from the lady Lunara, a great gift from the gods.”

Haldagozz and Tarren started off, but Roakore called out to them. “A gift it was indeed, friend, that I should have such a Dwarf at me side.”

Roakore watched them go; they were the first to pass through the great doors. Roakore laughed to himself.
Hah, a human boy and a Dwarf be the first to pass through Roakore’s door. Fittin’, I be thinkin’, the boy Tarren has become like a son to me, though I got enough o’ me own, en’ Haldagozz is sure to be one o’ me best soldiers. Bah, soldier, with his attitude en’ new strength, he should be a personal guard. I’ll make it so soon as I see Nah’Zed. I’m thinking the promotion’ll get him away from Lunara a bit; that’ll be a good thing. He can joke all he wants, but I see his heart. Ey’, the Dwarf’s in love, or I’m a bearded dragon egg
.

Roakore sighed and let his thoughts focus on the door. It loomed before him one hundred feet high, forty feet across, and ten feet thick. Every inch of the multicolored door had been polished to a perfect shine. It did not blend into the mountain; rather, it stood boldly before all onlookers as a strong testament to the Dwarves within the mountain. It seemed to say, “Here we are. We hide from no one, and we dare you to approach this door with ill intent…”

Nah’Zed broke Roakore from his reverie as she approached with her ever-present quills in hand. She was Roakore’s royal brain. Every king needed a secretary, and Nah’Zed had been a gift from the king of the Elgar Mountains upon Roakore’s taking of the throne. She was, indeed, the smartest Dwarf Roakore had ever met, in terms of math and memory, and she was none too bad looking either, as Roakore had thought more than once. She was a little skinny for his liking, but that could be cured with many days in bed and many feasts.