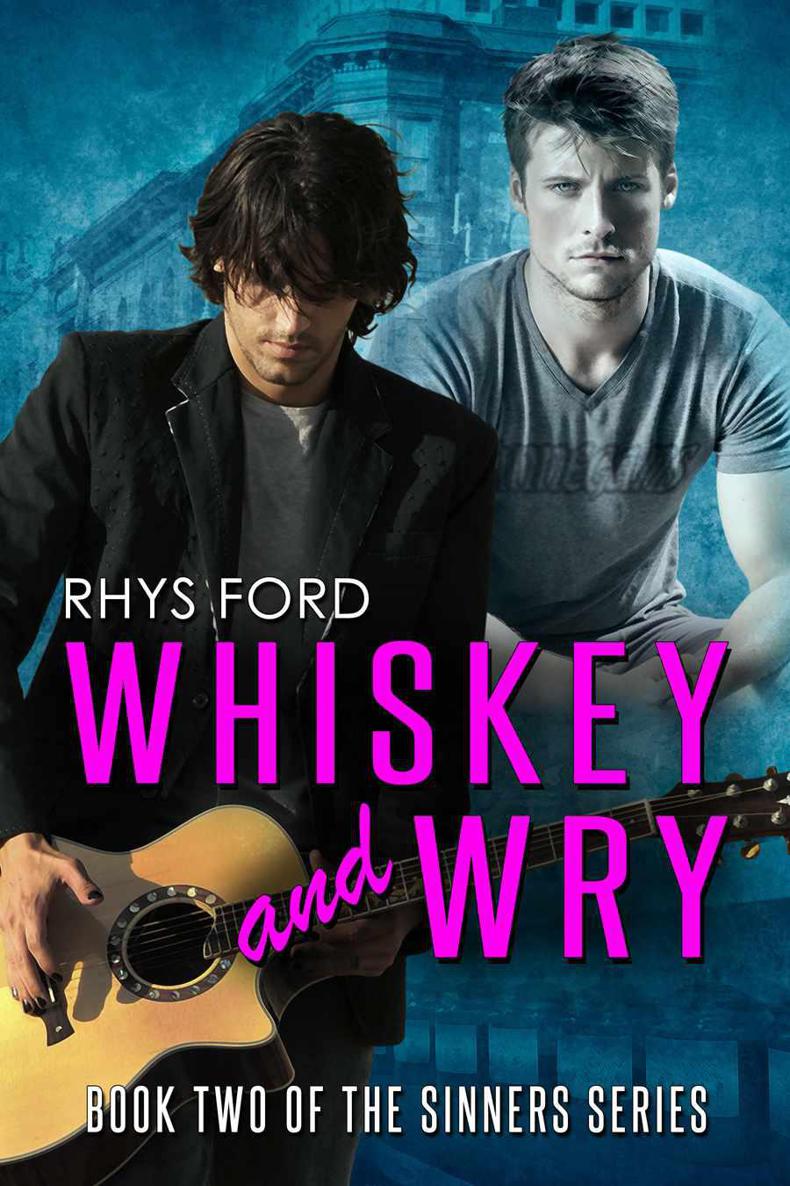 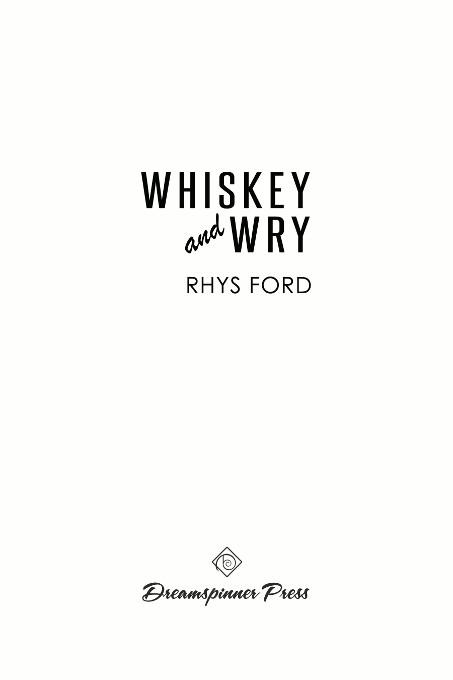 Whiskey and Wry
is dedicated to the three souls I have had in my life that have since passed me by on their way to Heaven. Scotty, a Collie who gave me his gracious and loving company for the first nine years of my life. Opala, a short-hair black cat I found at the trash dump who kept my soul warm for every single moment of his nineteen years he spent biting people he hated and loving me. Draven, my black cairn terror who hated birds but was probably the best damned behaved dog I’ve ever had… to the point of not attacking the crows in the backyard when I told him
no
.

This book is to each of you and the others who have been with me or who are with me now. You have all brought me pieces of my humanity. Thank you.

Once again, dudes… the Five. Well the Four of the Five, seeing as I am one. To Jenn, Penn, Lea, and Tamm. And to also my younger sisters, Ree, Ren, and Lisa. Love you all.

To the Dreamspinner staff, who really keep me looking damned good. Far better than I deserve. A huge thank-you for Elizabeth North, Lynn, Julianne, Mara, Ginnifer, Julili, and everyone else there. Thank you. Thank you. With cookies too.

Lastly to Dean and Castiel… dudes, just kiss already and put us out of our misery.

S
OMEONE
was trying to kill him.

If the fire at Skywood wasn’t evidence enough, the bullets flying past his head were a pretty good clue.

When the fire alarms went off, he’d finally seen his chance to get loose of the honey-brick prison he’d been trapped in. The place was like tar. If he struggled too hard or fast, it closed in, sucking him down into its oily depths. When he moved slowly and carefully—pretending to be some guy named Stephen Thompson—Skywood relaxed its hold on him. He’d been in the main entertainment room when black smoke billowed out of the air vents.

When the first fire alarm went off, he and his current bald Sasquatch attendant, Jerome, ignored it. The staff was forever losing control over one guest or another, and oftentimes, the sight of a red lever set behind glass was too much temptation for many of Skywood’s clients. Hardly a fortnight went by without at least one false alarm going off in its halls.

The smoke was only the beginning. The panic really began when the facility-wide intercom system kicked in with a call to evacuate the clients to the outermost grounds.

Damien choked on the ash swirling around the corridors, stumbling when he hit furniture obscured by the smoke. The rising black clouds made it hard to see, and running through the greasy ash made his lungs ache. The zipper scar down his chest ached and pulled, hooking its claws into his muscles with a sadistic twist, forcing him to hunch over to ease its ache.

Stopping wasn’t an option. Jerome kept shoving at his back, hurrying him forward to safety, but they soon got turned around in the cavernous building’s labyrinth of halls. The fire moved quickly, seemingly eating through the plaster walls with an almost demonic appetite, and Damien finally lost his patience, grabbed one of the heavy chairs next to a nurses’ alcove, and flung it at a nearby window.

The thick wooden chair bounced off the reinforced glass and hit him in the leg, and all Damien had to show for his efforts was a tearing streak of pain along his shoulders and a thick lump on his thigh.

“Get a fucking move on, Thompson,” Jerome muttered into his ear, reinforcing his order with a hard shove between Damien’s shoulder blades.

“Quit shoving me, fucking asshole.” There were times when the fake Stephen couldn’t hold back the Damien inside. Choking to death from smoke filling his strained lungs seemed to be one of those times. Damien pushed back, shoving Jerome back a step. Not bad, he thought as another wave of spasms wiped him out, especially since Jerome was built like a Rock ’Em Sock ’Em Robot.

His satisfaction seemed as fleeting as his breath when Jerome’s meaty fingers wrapped around the loose material of Damien’s cotton shirt and yanked him back with a flex of his arm.

Somehow, through the smoke and Damien’s coughing, Jerome located one of the outer doors. Keeping a tight hold on Damien with one hand, he fumbled with the key card he had hanging from a Skywood lanyard around his neck. After three tries, the display went green, and the door unlocked with a loud click. “When we get outside, you stick right next to me. Got it, you fucking nutjob?”

Jerome let go, and Damien stumbled forward, shoved off with a push from the attendant’s hand. Damien hit the door hard, and it swung open slowly, its pneumatic regulator refusing to go any faster. Cutting the man a look over his shoulder, Damien shook off the wrinkles in the back of his shirt, pretending Jerome’s words didn’t hit home. Truth was, he had no fucking idea if he
was
crazy or if everything they’d told him since he’d woken up was a lie. Somewhere in the back of Damie’s brain, a lingering doubt whispered hot maybes into his thoughts.

Suppose I am really fucking crazy?
the mocking voice hissed.
That I’m really Stephen Thompson and I just don’t
want
to be?

The cold air cut through the thin cotton shirt and elastic-band scrub pants he’d been given to wear. It chewed up the length of the thick purple-pink scar running from his chest to his belly button, a souvenir of a brutal heart surgery he wasn’t conscious for. The zippered mass of slick skin wasn’t the only sign he’d been battered about. His hair had been taken down to the skin and was just beginning to grow out to a length where the staple keloids were hidden under a dull black brush. It was still a surprise to see his short hair in the mirror, and his hands always seem to jerk out when he ran them over his skull, missing the foot-long shocking-pink-streaked mane he remembered sporting to an awards show.

If the awards show wasn’t just another lie his fucked-up brain told him.

There was too much evidence of an accident of some kind. His ribs ached, especially now that he was standing in the almost frigid outside air, and his left hand had a starburst of scars along the back that pulled when he made a fist. The headaches were a constant reminder of his brain’s misfiring, but it was the fleeting glimpses of a past he couldn’t quite grab at that were driving him nuts.

It had gotten so he really wasn’t sure if what he was remembering was real. Not the purring, husky laugh of a best friend as they shared a large coffee on a San Francisco pier or the screams of thousands of voices under a wall of lights he couldn’t see past. Amid all the confusion, fractured bits of music wove in and out of his shaky memories, pieces of a life he might not have ever lived.

Of everything Damien almost didn’t remember, it was the thought that the
music
wasn’t real that scared him the most.

After stumbling outside, he and Jerome fumbled through the bushes, trying to fight their way to clear air, when a man dressed all in black stepped out of the tree line. For a moment, Damien thought the shadowy form was a dark cast of one of the nearby firs. The moon was dripping full, and its light turned Skywood’s gardens and surrounding forest into a silvery-tinted landscape.

That was when Damien learned bright red blood looked like spilled ink under a full moon’s light.

Damien never heard the shot that killed Jerome. He only saw the aftermath of the man’s head suddenly cracking open and his face crumbling inward under the force of the bullet’s strike. He only knew he smelled blood in the air, and in a heartbeat, his mind flashed back to the feel of his body hitting cold steel and the stink of his bandmates’ deaths in his nose.

The sound of a bullet hitting a short stone wall by his knee got Damien moving. Another shot rang out, burrowing through a hedgerow he’d ducked behind. From his scant cover, Damien spotted the man moving out of the trees, only stopping long enough to check Jerome’s body spread-eagled over the grass.

Not looking back, Damien began to run.

T
HE
sirens were loud, echoing through the valley. Damien could follow the whoop-whoop of sound if he tried hard enough, but he was too busy running for his life.

Evergreen boughs snapped at his face and bare arms, stinging welts into his pale skin. Pounding through the underbrush around the compound, Damien ducked and wove as best he could, but the nearly freezing night air pulled at his lungs and tightened the muscles around the scar zippering up his chest. The thin cotton T-shirt and elastic-waistband pants Skywood had issued him were little protection against the elements, and he’d torn out the sole of his left loafer trying to leapfrog through a bank of craggy boulders set into a grassy hill.

Still, it was a damned sight better than having his brains sucked out from all the syringes they’d shoved into his head.

Panting, he forced himself to stop moving when a thick beam of light swept over the forest, the chop of a helicopter’s blades cutting through the air above him. His heavy breaths created ghostly blossoms of mist in the air, their spectral shapes glistening in the full moonlight before whispering off into the darkness. The sky turned a molten red above a sea of rising flames, and voluminous black clouds rose up from the spreading fire, the wind carrying their heavy, ash-laden forms over the nearby countryside.