Read White Is for Witching Online

White Is for Witching 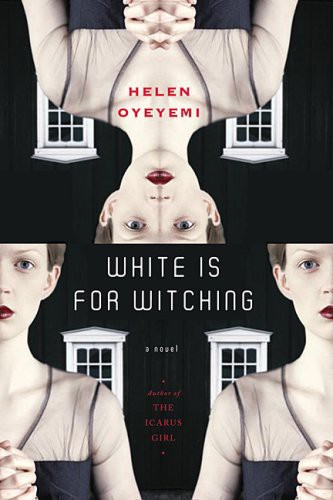 Published in Canada by Penguin Group (Canada), a division of Pearson Canada Inc., 2009.
Simultaneously published in the United States by Nan A. Talese,
an imprint of The Doubleday Publishing Group, a division of Random House, Inc., New York,
and in Great Britain by Picador, London, under the title Pie-kah.

I hold my honey and I store my bread

In little jars and cabinets of my will.

I label clearly, and each latch and lid

I bid, Be firm till I return from Hell.

Miranda Silver is in Dover, in the ground beneath her mother’s house.

Her throat is blocked with a slice of apple

(to stop her speaking words that may betray her)

her ears are filled with earth

(to keep her from hearing sounds that will confuse her)

her eyes are closed, but

Does she remember me at all I miss her I miss the way her eyes are the same shade of grey no matter the strength or weakness of the light I miss the taste of her I see her in my sleep, a star planted seed-deep, her arms outstretched, her fists clenched, her black dress clinging to her like mud.

She chose this as the only way to fight the soucouyant.

Just gone. We’d had an argument. It was dark outside. Gusts of wind tangled in the apple trees around our house and dropped fruit onto the roof, made it sound like someone was tapping on the walls in the attic, Morse code for
let me out
, or something weirder. The argument was a stupid one that opened up a murky little mouth to take in other things. Principally it was about this pie I’d baked for her. She wouldn’t eat any of it, and she wouldn’t let me.

“Why did you use the winter apples?” She asked it over and over. Nothing I replied could break her monotone.

She said: “You’ve done too much now. I can’t trust you anymore.”

She shook her head and dropped to the disappointed hiss of a primary-school teacher, or a kid trying to borrow the authority of one: “Bad! You are
bad
.”

(My sister turned seventeen in a mental health clinic; I brought our birthday cake to her there.)

Miri’s accusations, her whole manner that night scared the shit out of me. She looked in my direction but she couldn’t seem to focus on me. She was the thinnest I’d ever seen her. Her hands and head were the heaviest parts of her. Her neck drooped. She hugged herself, her fingers pinning her dress to her ribs. There was an odd smell to her, heavy and thick. It was clear to me that she was slipping again, down a new slide. When she said she didn’t trust me, I turned away rather than let myself get angrier.

I went up to my room. Miri didn’t call after me. I don’t think she came upstairs again. Or she may have, without my hearing. I’m not sure. I heard the front door slam, but I thought it was just one of the guests coming home late. I stayed where I was, knelt on my window seat, smoking, seeing shapes in the rain, listening to all the apples in the world bouncing off our roof.

That last time I saw Miri, she wasn’t wearing any shoes. Five months
ago I took that as security that she would come back. And now I keep coming back to that in my mind, the fact that she was barefoot. That her running away was a heat-of-the-moment thing, unplanned.

A part of me knows that we can’t find her because something has happened to her.

Miranda is at
home

very ill—
Miranda has pica she can’t come in
today, she is stretched out

inside a wall she is feasting on plaster she has pica

I’ve been dialling her phone, the phone she lost months ago, as if she might have caught up with it somewhere. I wrote her a note and folded it in four and slipped it under her door.

I know she’s not there.

But I wrote,
Miri I’m lonely
.

I dropped the words onto the paper so hard that they’re doubled by the thin perforations around them.

What I mean is, each act of speech stands on the belief that someone will hear. My note to Miri says more than just I’m lonely. Invisibly it says that I know she will see this, and that when she sees this it will turn her, turn her back, return her.

Miri I conjure you.

me I will not allow her to live

WHAT HAPPENED TO LILY SILVER?

Miranda lay beside me on the grass that circled the mill pond, her lecture notebook opened up on her stomach. Bicycles kept passing by, their wheels groaning against the wooden bridge. The sun shone through clouds swollen with the smell of wet bark, and there were bees around us.

Miranda spoke so quietly I had to move closer to her, my ear to her lips. “It’s Eliot’s fault,” she said.

When I looked at her, she smiled brightly. Incongruous smiles were a sort of nervous thing with Miranda, a way of protecting herself from consequences, I think. Just like putting sunglasses on, or opening up an umbrella.

I spent Lily’s second night in Haiti on Miri’s bedroom floor. Miri switched off the light and folded herself into her bed in her usual way, so that every part of her was covered and the bedsheets set around her curled body as if she was fixed in wax. I never knew how she managed to breathe. She said she slept like that so her dreams wouldn’t escape.

I leaned my back against her desk, wrapped blankets around my shoulders and tried to read with a flashlight.

The weird thing started when I said to Miri, “Don’t fall asleep yet.” The “please” hugged the roof of my mouth and refused to go out to meet her.

I didn’t answer. I tried to picture our mother in Haiti and I saw her in a tower built of guns, heaving with voodoo, creepy gods and white feathers tipped with blood.

Lily’s eye transformed places. She looked at structures and they turned inside out and offered her their desolate jigsaw patterns. Once Lily pointed out a photo of hers in a magazine, a picture of a tundra with a ball of ice at noon in the sky. What was this place? My mother gave me three guesses. My best and most desperate guess was that truckloads of sand had been poured onto a simulation of the surface of the moon. “Nope,” she said. “Gobi desert.”

Lily was the changer who came home the same. But that last time the signs were bad. When she left, she had forgotten her watch on the telephone stand in the hallway, a brass body with thin leather arms, ticking away Haitian time, six hours behind ours. How could she have forgotten her watch? She never had before. Miri and I had debated leaving it where it was (that seemed luckier), then Miri had confiscated it for safekeeping in case one of the houseguests stole it or broke it or something.

Miri said sleepily, “The goodlady will take care of Lily. She promised.”

The 3rd Victim by Sydney Bauer
A City Called July by Howard Engel
Blue Jeans and a Badge by Nina Bruhns
Juneteenth by Ralph Ellison
Don't Ask by Donald E. Westlake
Bething's Folly by Barbara Metzger
Fundación y Tierra by Isaac Asimov
Lowcountry Summer by Dorothea Benton Frank
Everybody Loves You by Ethan Mordden
The Big Bam: The Life and Times of Babe Ruth by Montville, Leigh
Our partner