Read Who Hunts the Hunter Online

Who Hunts the Hunter 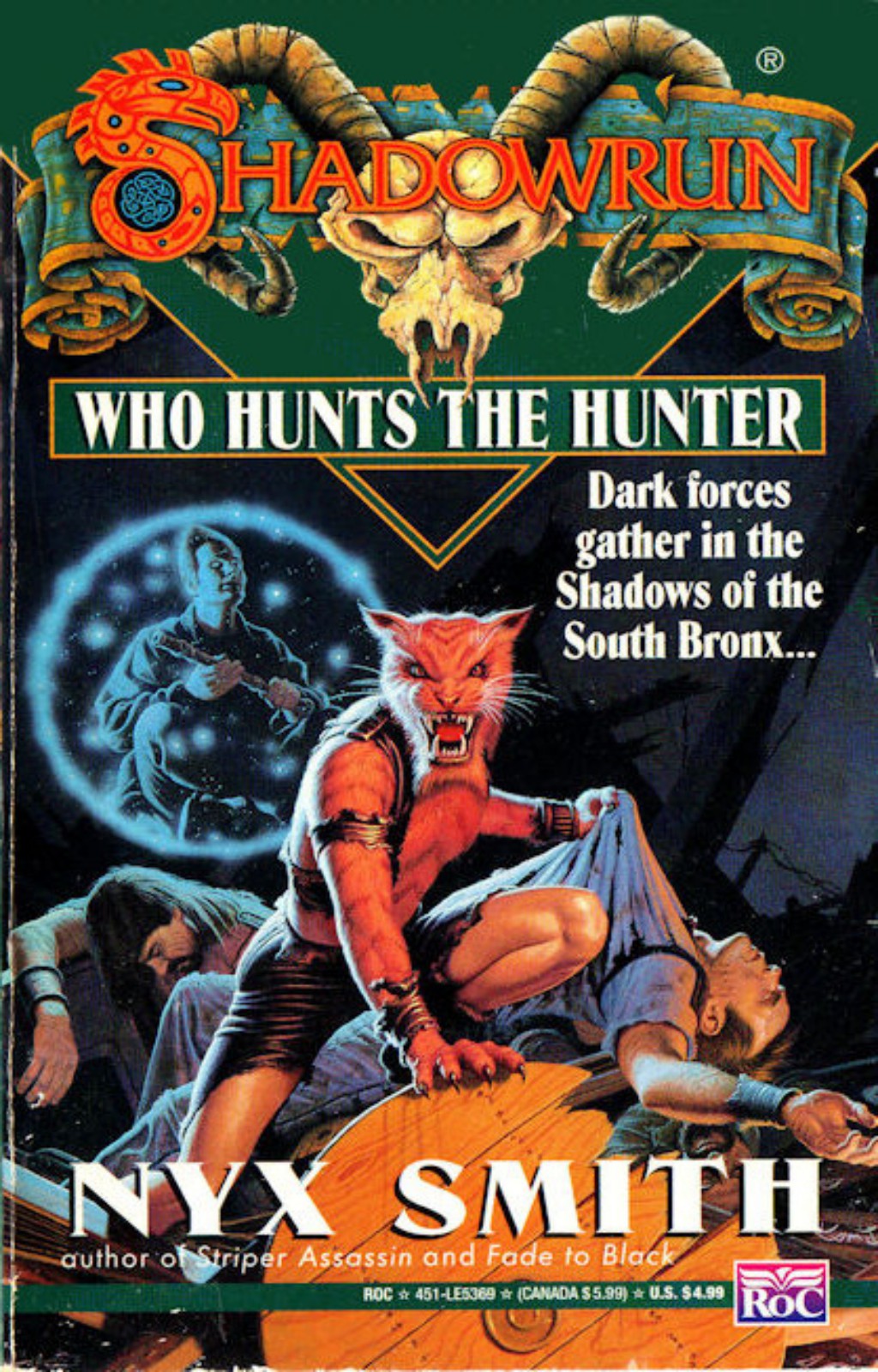 From the distant forests of Maine comes the deadly Weretiger known as Striper, seeking nature's own special justice.

From the shadowed heart of the South Bronx comes the shaman called Bandit, interested only in the pursuit of his arcane arts, and the reconciliation with nature that Raccoon demands.

From the nightmare streets of Newark come Monk and Minx, seeking life itself.

Who is predator and who is prey? The assassin? The shaman? The kids with the red flashing eyes? The Director of Resource for Hurley-Cooper Labs, or HCL's dedicated scientist? Or is it the elves? Or the mystery man from the Department of Water and Wastewater Management with a technical rating higher than God's?

Before they are done, a killer will learn the meaning of mercy, and one who honored life will discover the necessity of ruthless destruction....

THE ELVES MAKE EVERYTHING SIMPLE AGAIN.

The bar is small and rustic and made of wood. The atmosphere is heavy with sweat, the scent of stale beer, and cigarettes. The music keening quietly from the neon-stroked box in the corner is nearly a decade behind the mode. The two-legged humans seated on stools at the bar scattered around are dressed in ragged natural fibers and cheap plastiwear.

The music fades into silence. Two-legs turn their heads and look. Tikki stands on the threshold in her human guise, and she is nude.

“Give me your clothes.”

The woman objects. A man stands to fight. As he goes down, two more arise, ready to fight.

Before the last have fallen she is like a creature out of their nightmares—half human, half beast— her face an inhuman mask, her arms and upper body massive with muscle, fangs gleaming from among her teeth. The barman brings up a shotgun, but it is too little too late. The two-legged female who started it all frantically wrenches off her clothes, screaming, stinking of terror, and runs naked for the door.

Tikki dresses, then turns to face those who remain. The hunting is begun, and now she needs a car.

WHO HUNTS THE HUNTER 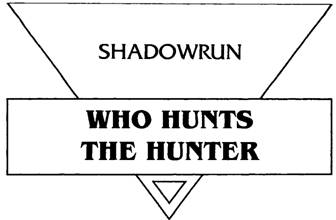 For more things than we can remember, For things no one else could have done, For caring, for trying, for doing,

For getting it right every time ...

Special thanks to readers John S. Francavillo, Fern R. Francavillo, Scott Lusby (Aspiring Author), Paul Sitomer, Ted Swedalla (the Wonder Stud), and Dave Zimmerman for their remarkably insightful critiques of the original manuscript; Shirley Barnes, for letting Dave actually read the manuscript; Robert N. Charrette, for things past and present (need I say more?); Romans, fellow countrypersons, enigmatic humanity, nature, and the universe for no particular reason, and also the Face, LF, wherever you are, for getting it started.

Welcome to the club.

When the stars threw down their spears,
And water’d heaven with their tears,
Did he smile his work to see?
Did he who made the Lamb make thee?

Moving from cover to cover, from tree to brush to gully. In the dying light of the setting sun she is a four-legged phantom in black-striped fur the color of blood. Her eyes and ears, all her senses, her whole being, are focused on the antlered creature standing barely ten meters away.

The creature pauses and turns its head. It grunts discontentedly. Does it know? Does it see, does it smell?

The forest is draped in winter, snow and ice cover the ground, and for one fleeting instant the cold clear air hangs on the treacherous razor-edge of perfect stillness.

The elk turns and looks away.

The phantom explodes through the underbrush, plowing through snow drifts, springing, leaping, hurling herself over the corpse of a fallen tree. She is not Tikki, not Striper. She is 350 kilos of primitive meat-eating savagery. She is carnivore incarnate.

The elk recognizes the threat—hears smells sees her coming—and fights through the snow to flee, but Tikki closes the distance in instants.

And in the last instant, the elk turns to face her.

Tikki feints, dodges the menacing antlers, then slams bodily into the elk’s flank and with one final merciless lunge seizes the animal’s neck in her jaws.

That is the death grip, the killing grip. Her jaws are a steel-sprung trap crushing the animal’s neck, snapping bone, tearing through flesh, even as she bludgeons and batters the creature with paws like massive mallets. The elk staggers and falls beneath her assault. Its rapid panting breaths become a desperate pounding rhythm punctuating the final moments of its life.

Then it ends. As nature intended it should end.

Blood trickles into the snow. The elk’s carcass steams in the frigid air. The aroma of death arises. Tikki lifts her nose, drinking in the scent, relishing it, and growls deep in her throat, fangs bared, instinct satisfied.

This is right. How it should be. The right way for things to end. She is nature’s weapon, born to hunt, designed for the kill, just as this elk and all creatures like it were meant to be prey. No one who could see her in this moment, in this her natural form, could possibly doubt it. No one, especially her, could doubt that the creature lying beneath her is hers by natural right. It is a defining moment, a proof of everything she has ever believed about herself, and a repudiation of all things human and metahuman.

Two-legs. She has no need of them now. She is better off without them, in fact. They make things complicated.

Here in the wild, survival is the only concern.

Tikki looks at the fallen elk, lowers her head to sniff it. The elk’s big, even bigger than her. Dragging it through these snow-laded woods will not be easy. Too bad she has no choice.

Her cub must have meat. The cub can’t come to the kill, so the kill must go to the cub. Tikki had three cubs. One was flawed in some obscure way and died shortly after birth. Another was killed by hellish dogs breathing fire, dogs she systematically hunted down and slaughtered. The third, the smallest of the litter, was hurt by the dogs and seemed slow to recover. Since then, she has kept it in the old cabin where her supplies are stashed, where animals cannot get at it, and where, wrapped in the hides of dead dogs, it will be warm.

The cub is healed now. It grows stronger. Soon it will be strong enough and large enough to follow her on the hunt, to watch, hidden among the trees and brush, to learn the making of a kill, the quiet movements, the sudden charge, the crushing grip ... all that the kill involves. That will make life less difficult.

Tikki could make the passage back to the cabin less difficult by first eating her fill, but the smell of that much spilled blood would attract every kind of scavenger and that would lengthen her journey. She will drag the carcass back whole to some point near the cabin, near enough for the cub to reach without trouble, but not so near as to attract other predators to her lair.

She grips the elk around the neck and begins dragging.

The journey is long and full of hardships. The carcass is heavy; dragging it proves awkward and tiring. The snow in places is a meter or more deep. The elk’s antlers catch on trees and scrub. And always instinct haunts her. Prey worth the trouble of catching is difficult to come by in these northern forests. Rabbits and other small animals are plentiful enough, but unless she can catch them asleep they are not worth her cost in time and effort.

Tikki has spent many days hungry since the first cold winds of Fall came blowing. And now her stomach grumbles. Her limbs twitch with the urge to tear the elk open. Her ears flick with impatience. Instinct tells her to gorge herself on the carcass, fill herself to bursting with life-giving meat—now! at once!—while she has the chance. She would do it without hesitation but for the one thought foremost in her mind, the image of the cub waiting for her in that far-off cabin.

The cub has changed things. That young life has become as important to Tikki as her own. She does not really understand how this can be so. She’s pondered the point till her head aches from thinking and still she reaches no conclusions. Carrying the cub in her belly and getting it out through her loins took a great effort, but she has known great efforts before and none has ever affected her in quite the same way. Maybe suckling the cub had something to do with it. Maybe it’s some kind of magic.

All she really knows is that she would lay down her life for the cub—this she knows absolutely—and so she has come to accept the one thing that seems most incredible of all. That some things, perhaps this one thing only, mean more to her than her own survival.

Until now, she would not have thought that possible. Until now, she had considered her own life to take precedence over practically everything else in the world. How can this be? She puzzles over the point constantly.

It is, perhaps, beyond understanding.

The smoldering sun sinks behind the tops of the mountains. Twilight fades into the dusky grays of night. From out of the distance comes the menacing howl of a creature Tikki has seen only once, a strange two-legged beast with wings and a single horn. Not an ordinary two-leg. Tikki lets go the elk to lift her head and roar her warning. Only silence answers and that is well. She has staked out a large territory and she guards it jealously. Good prey is scarce. Sharing her domain with other hunters would leave her that much less to eat, and less for the cub.

She continues on. Soon she spies the skull of a creature like a bear, but with short, curving tusks, sitting on the stump of a tree. More skulls: deer, moose, something like a wolverine but larger, something resembling a lion but with spikes at the end of its tail. Many of these skulls, picked clean by scavengers, hang in trees and sit on stakes. They are her warnings to two-legs, to creatures with senses too dull to detect the clear and obvious signs she has left on trees and brush for kilometers around the cabin, signs that mark this part of the forest as her personal possession.

The snow beneath her paws grows hard and crusty with icy crystals. Odd smells touch her nose. Tikki lifts her head again to test the air. The smells are faint but harsh and set her nerves to twitching. They begin speaking to her of humans and human machines. The last time she smelled anything of machines was at the start of winter, when Raman, her cub’s sire, rode away on his motorcycle. The cold made him shiver. The promise of snow turned his thoughts constantly to the south. He said he would return here to Maine with the Spring, and Spring is still weeks away.

Tikki abandons the elk and goes loping, running toward the cabin. When she hears the noise of an idling engine, she charges. The sound is wrong. Wrong, wrong, wrong. It is not Raman’s cycle. It is like the turbine-inflected whining of a panzer.

More smells come. Weapons and synthleather and the distinctive aromas of intruders.

Terror and fury send her crashing through brush, skidding and spinning down icy slopes. Her legs piston frenetically. Breath roars through her throat. The scattered bones of prey, hidden by the snow, crackle and crunch beneath her pounding paws.