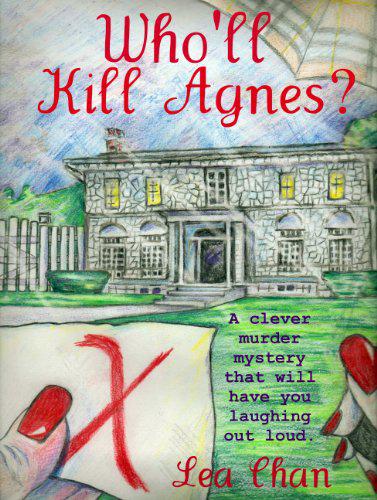 This is a work of fiction. The characters and settings are fictitious and any resemblance to actual persons, living or dead, and to specific places is purely coincidental.

For Mother and Ray, mystery lovers

Acknowledgments: D.M. for her willingness to read a handwritten manuscript and Cindy S. for typing that manuscript; L. H. for her editing and comments; Kathryn B., Betty W., Andrea Z., and Cheri S. for their comments and suggestions; Sandi B. for her critique.

Quincy Martin
– justice of the peace

“Dear sweet Agnes,” murmured Hilda Briar as she swallowed the mild sedative that her elderly doctor had prescribed for her. She lay down on her old four-poster bed, part of the mahogany furniture that she had inherited many years ago, and glanced around at the blue chintz walls of her upstairs bedroom suite. Then she closed her eyes and centered her thoughts on her twenty-six year old niece who had suddenly appeared on her doorstep a few months earlier, anxious and inquisitive about her health.

Such concern and care Agnes had shown her. Hilda now realized that Agnes just needed to grow up some to appreciate how important kinfolk were
.
But who would have thought that of her two nieces, it would be Agnes who would care for her in her declining years, she asked herself.

A tear ran down her face as she remembered how her precious little niece Audrey, pretty and sweet, had been tormented and taunted by Agnes, unappealing and gawky, eight years Audrey’s senior. As a child Audrey had been Hilda’s favorite, always running to her for love and affection. The tears streamed down her face as she thought of the treachery that she now endured from the child with whom she had shared so much camaraderie.

According to Agnes, her dear Audrey had turned to the ways of Satan and Agnes herself had found salvation. Well, she thought, Agnes was still a plain-looking girl but she wasn’t gawky or mean anymore. She was a considerate angel, that’s what she was. Hilda would never have known about her illness until it was too late if Agnes hadn’t come and spotted it.

“Oh, thank the Lord for dear sweet Agnes.” That was the last thought that Hilda Briar would ever have as the mild sedative took hold.

The dear sweet Agnes who had so endearingly occupied her aunt’s last thoughts was standing quietly in the doorway waiting for the sedative to do its work. Cautiously, she approached her aunt as a beatific smile crept across her face. She stood staring at Hilda for a few minutes, secure that the old lady would not waken.

Old Doc Kelly was putty in her hands
,
she thought. Whatever she told him Aunt Hilda needed, he complied
.
Her saintly smile widened.

In her right hand Agnes held a plastic garbage bag with a drawstring. Using her left hand she slowly lifted her aunt’s white-haired head and slipped the bag over her. She pulled the drawstring tight enough to cause suffocation but not tight enough to leave any marks or bruises. Soon the old lady was still; no breathing was apparent. Agnes waited another five minutes, the silence in the room broken only by the ticking of the antique alarm clock on the nightstand. Slowly she released the drawstring and gently pulled the bag off her aunt’s head. She checked her pulse. Nothing. She picked up her aunt’s ornate, gilded hand mirror and held it under Hilda’s nose. Nothing. Still smiling divinely she bent over the wastebasket and emptied the contents into the plastic bag, closing it with the drawstring.

She walked over to the front windows and, from her second floor view, surveyed all that would soon be hers. It had been so easy. Too easy. Her aunt, who had been in perfect health and probably would have lived at least to a hundred, had protested at first when Agnes had told her that she looked peaked and needed to see old Doc Kelly. But she soon acquiesced to Agnes’ persistent warnings. And Doc Kelly, semi-retired and years beyond his prime, had, at Agnes’ recommendation, prescribed a mild sedative so that Hilda could get the rest she needed. There had not been a diagnosis of any illness but Agnes had convinced the two elderly people that Hilda must be extra vigilant and careful with her health. Agnes, of course, had been the vigilant one assuring that Hilda took her sedative every afternoon at two o’clock.

Maintaining her smile and absentmindedly gazing out the window, Agnes recalled how upset her aunt had been when she told her about the wicked doings of her teenage sister. Hilda had hardly needed any prodding at all to change her will. The Briar family lawyer, although not so old or decrepit as old Doc Kelly, had readily agreed that Hilda should disinherit the younger sister. If Audrey, at such a tender age, was already involved with prostitution, drugs, and alcohol, then Hilda had no recourse but to leave her entire estate to Agnes. There was no point in giving half a fortune to someone who would rapidly squander it, the lawyer had said.

Turning from the window and glancing at the peaceful corpse on the bed, Agnes gave a sigh of relief. The deed was done and she would soon be a wealthy woman. She could give up her job as hostess at the elegant Southern Star Restaurant in Connor’s Corner, fifteen miles away, although she had some unfinished business to take care of there before she resigned.

Agnes left the elegantly furnished room with its permanently still occupant and shut the door behind her. As she descended the stairs, smiling sweetly with a full trash bag in hand, she encountered Edna the housekeeper.

“Oh, Edna darling, Miss Briar is sleeping peacefully now, but in an hour or so will you please check on her? She needs her rest but she mustn’t sleep too long or she won’t sleep well tonight.” It was a ritual they went through every day. “If there’s any problem just call Doc Kelly, no one else, hear? Oh, and please throw out this trash.”

“Yes, ma’am.” Edna, a hard-working woman in her mid forties, thought that Miss Agnes was the kindest young woman that she had ever known. How many women her age would take such care with an elderly aunt?

Agnes walked on down the stairs and out of the house to her car and drove down to the new shopping center, humming a cheerful tune.

Audrey Briar, who was not a teen prostitute, a drug addict, nor an alcoholic, followed her tour guide and chaperone through customs at the Paris airport, still not quite believing that her spiteful older sister had treated her to a summer in France as a high school graduation gift. Was Agnes really turning a new leaf, she wondered?

She put aside her thoughts of Agnes and looked forward to the bus ride from the airport to the hotel. On the plane she had made friends with some of the girls in her group and hoped that she would room with them. Once at the hotel the chaperone divided them into groups of four and Audrey indeed found herself with her new friends. When the chaperone left them, the girls hugged each other and ran around the room shouting and jumping.

“This is just too wonderful!” exclaimed one. “Freedom! Oh, glorious freedom.”

Audrey laughed and then in a sober voice said, “I doubt that any of you can appreciate this as much as I do. Freedom has not been part of my life for quite a while now.”

“What do you mean, Audrey?” asked another friend. “Have you been in trouble or something?”

“Oh no, not at all. I really hate to bring this up because I want this summer to be as carefree as possible.”

Her friends looked at each other with perplexed expressions. One finally said, “Maybe you should just tell us and get it out and then we’ll help you forget.”

Audrey was silent for a minute before replying. “I have an older sister named Agnes. Our parents died in an automobile accident four years ago. Agnes insisted that I live with her and that was the last thing I wanted. I would have much preferred living with our dear Aunt Hilda but Agnes wouldn’t permit it. She went through all kinds of legal maneuvers to make sure that she was appointed my guardian. Agnes was stricter with me than our parents ever were with either of us. I don’t think Aunt Hilda even knew how much I wanted to live with her.”

“Audrey, I’m so sorry to hear about your parents. That must have been a dreadful time for you.”

“But how could an older sister be strict? I should think you would have an easy time doing the things you wanted to do.”

“Oh no, Agnes is the trickiest person in the world. She always managed to put a stop to my plans with sweet talk that was really blackmail in disguise.”

“Now, that’s just plain crazy. So, how did you get away for this trip?”

“Speaking of crazy, that is the craziest part of all. Agnes gave me the trip as a graduation present. She wants me to spend the summer here in Paris and on the French Riviera.”

“Whoa now, I think I smell a rat. Do you suppose this is part of one of her disguised blackmail schemes?”

“At first I wondered about that but there is nothing I have that she could want. I am simply going to enjoy my summer’s freedom and being away from my meddling, dictatorial sister!”

“What will happen when you go back?”

“I plan to go to a modeling school. I have always wanted to be a fashion model.”

“Does your sister know that?”

“Oh no, I would never have told her. I’m sure she wouldn’t approve but I’m old enough now to make my own decisions.”

“Don’t you think eighteen is a little old to start a modeling career? Granted, you are tall and beautiful with a svelte figure but it’s a grueling career to get into.”

The Bride Gift by Sarah Hegger
The Vampire's Vacation by Ron Roy
Every Breath You Take (Oasis Book 1) by Kenna Avery Wood
The Reaper's Apprentices #1: Awakened by CS Patra
A Year to Remember by Bell, Shelly
Shadow of Legends by Stephen A. Bly
The Vicar's Frozen Heart by Karyn Gerrard
I Called Him Necktie by Milena Michiko Flasar
Just For Now (A Flirting With Trouble Novel) by Annie Kelly
The King Takes A Bride (Royals Book 4) by Bourdon, Danielle
Our partner