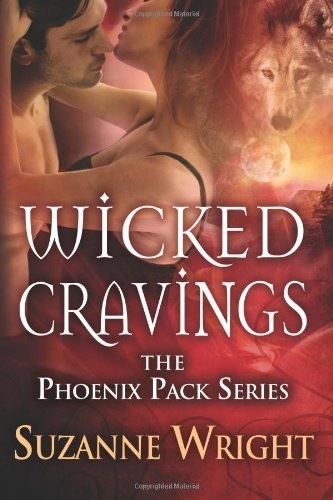 In loving memory of baby Curtis

Dante shot a fierce scowl over his coffee mug at Dominic, Tao, Trick, and Marcus. “She’s not my mate,” he repeated for the tenth time. He knew the enforcers were playing with him, but he was too agitated to see the funny side of things. Was there a funny side to a female maintaining you were her mate to her seven brothers who wanted your balls on a plate for “abandoning” her?

“All I’m saying is that you guys looked cute together,” teased Trick as he leaned back in his seat opposite Dante at the long oak table. No sooner had he set aside his empty cereal bowl than Grace, undeniably the world’s best cook, collected it. She gave Trick a reprimanding look for his teasing, but Dante could see that she was hiding a smile.

“Yeah, you matched well,” agreed Marcus, wearing his usual clown-wide grin, which made most females melt while it irritated the shit out of Dante.

He looked at Marcus incredulously. “I matched well with an agent of Satan?”

“Someone has to have that agent of Satan.” Dominic shrugged innocently before taking a swig of his coffee.

Trick gave Dante a kind, understanding smile that couldn’t have been more false. “Don’t worry, I’m sure that in time she’ll forgive you for abandoning her.” The “abandoning” part aggravated Dante just as much as the false claim. He would never walk away from his mate, even though he wasn’t yet ready to find her. It wasn’t that he didn’t feel the absence of that bond in his life. He did, and so did his wolf. But it wasn’t as simple as that. When his mate came along, she would rightfully want all of him, she would demand to be at the center of his life, and she would expect his loyalty to be with her, first and foremost. For a Beta, that could be a problem. At present, Dante’s loyalty rested with Trey and his life was dominated by his responsibilities to the pack.

A Beta was more than just an Alpha’s right-hand man, responsible for giving advice on political matters. He was also responsible for the protection and safety of the entire pack, he was the mind behind the plans and strategies, and he acted as a go-between for his Alpha when negotiating matters with other packs. He also trained and commanded the enforcers. Betas got their hands dirty doing the jobs that no one else wanted—particularly interrogating and executing enemies. Dante was well known for his skills as an interrogator.

Every day, he spent time patrolling pack territory with whichever enforcers were on duty, milling through paperwork or making important calls to lessen Trey’s workload, and being an ear for any member of the pack who had problems to address. He was just as responsible for the pack’s emotional well-being as he was for its physical safety. Also, he was in constant contact with the enforcers, so that he was always aware of any activity near the borders of pack territory. But having such heavy responsibilities was okay, because Dante liked his position and he was honored to be Beta.

His mate, however, wasn’t going to be content to share him. He’d seen it happen many times before. Sure, the females were often happy at first, because it meant that they held the position of Beta female in the pack. But once they realized the sacrifices that came with it, the ultimatum soon came:

“Your job or me.” It was the same one that his mother had given to his father. And when his father had chosen his job…well, life became pretty shitty. If Dante’s mate gave him that ultimatum, he could never make the same choice his father had made. He would have to give up his position as Beta. He wasn’t ready to do that yet.

“You know, there’s nothing wrong with a complicated woman,” said Marcus, topping his plate with more food. It was amazing that he was in such good shape when all he ever seemed to do was eat.

Dante took a gulp of coffee. “Personally, I prefer females who, like me, are
un
complicated.” Rhett snorted. “Someone like that would bore the hell out of you, and you know it. Just as you know that you’re not so uncomplicated at all. You might be easygoing and laid-back, but underneath all that you’re deep, complex.”

“That’s Ryan you’re describing.” Dante gestured to the frowning wolf beside him—the only enforcer who wasn’t joining in on the whole “let’s irritate Dante today” thing. Ryan, a man of very few words, merely grunted before returning his attention to the food in front of him.

“Ryan’s certainly complex,” allowed Rhett. “So are Trey and all the enforcers—it’s part of why you all became friends in the first place. Like calls to like. But we’re not talking about any of the others—we’re talking about you. Since you took up the mantle of Beta when you were an adolescent, you’ve put yourself second to everything else—the pack, our Alpha, your responsibilities. You’re a workaholic of the worst kind. You need to find that work/play balance. You need to be as protective of yourself as you are of everyone else.”

Dante really wanted to punch Rhett. The guy was genuine, loyal, and he would give any of his packmates the shirt off his back, but he would also analyze their every move, take them apart, and find out what made them tick. It was the way his geeky, analytical mind operated. Annoyingly, he couldn’t just allow people to have their problems. No, he wanted to “fix” everyone. It was why Taryn called him a “psychological mechanic.” But Dante didn’t need fixing; he was dedicated to his job, but he was
not
addicted to it. “Easy there, Dr. Freud. Are you also going to tell me I secretly wanted to have sex with my mom when I was growing up?”

Rhett started to say something else, but Grace shot him a sharp look. He sighed. “Fine, shut down. It’s only because you know I’m right.”

“Now can we back get to the original subject? Why would Glory falsely claim I’m her mate?

She has to know that it’s not going to make me mate with her.”

“Maybe her pride’s stung because she’d expected to be more than a one-night stand and she wants to cause trouble to get back at you,” suggested Tao, the Head Enforcer.

“But I told her before I even touched her that I didn’t want anything more than that.” Dante sighed. “Why would she expect more?”

“Some people won’t accept what they don’t want to hear or see.” Rhett’s expression was genuinely sympathetic.

“Yeah,” agreed Dominic. “She’ll probably be happy once her brothers are done with you.”

“See—agent of Satan.” It wouldn’t be the first time a gang of brothers had targeted Dante. At least this time they weren’t his own.

“They’re all big fuckers, you know.” Trick’s lips twitched into a smile. “I heard they’re a crazy bunch, too. And I don’t mean ‘eccentric’ crazy, I mean ‘
we, the jury, find
…’ crazy. If I were you, well, I’d definitely be a little nervous.”

“Nervous of what?” asked Shaya as she entered the room and took a seat at the table. The redheaded female, who had been a close friend of Taryn’s since childhood, had recently joined.

Ordinarily, Trey didn’t like adding newcomers to their relatively small pack of sixteen. In fact, with the exception of Taryn, it consisted of only those who had left their old one, the Bjorn Pack, with Trey when he was banished. But he had accepted Shaya at Taryn’s request, and he had also allowed two members of the Bjorn Pack to switch with Selma and Kirk when they left Phoenix.

Trick smiled at Shaya. “We’re just congratulating Dante on finding his mate.” Almost as if he sensed that Dante was close to strangling Trick—not through a loss of control, just because it would be fun—Tao quickly explained, “A one-night stand of Dante’s apparently doesn’t like that she was simply a one-night stand and has decided to tell her brothers she’s his mate and sic them on him.”

Shaya winced. “Taryn’s not going to like it when she finds out. Good luck to Trey with keeping her out of it.”

Tao looked at Dante. “What are you going to do? If it was me, I’d want to go and confront her.”

“That’s probably what she’s hoping I’ll do. I’m not playing her games.” Dante drained the last of his coffee. “We’ll meet Nick Axton at Mo’s Diner to discuss it like he asked. As her Alpha, it’s his right to sort this mess before it goes any further. Refusing him that chance would mess up our alliance with his pack. No spoiled little princess is worth that.”

“At least he was good enough to call and let us know what Glory’s up to,” said Ryan.

“Do we mention this to our Alphas before the meeting?” Tao asked.

“No.” Naturally it wasn’t good to keep things from your Alphas, but part of Dante’s role as Beta was to protect them—even from themselves. As Shaya pointed out, Trey was going to have a hard time keeping Taryn, who was heavily pregnant, from getting involved. “It’ll be better to have the meeting before telling them. That way, Taryn can’t demand to go and Trey won’t have to sedate her.” Tao and the four enforcers nodded, satisfied with the plan.

“Has Jaime come down for breakfast yet?” Shaya was referring to one of the pack’s other two new additions. Dante and Jaime had been in the same pack until he was fourteen, when he left with Trey and several others, but he hadn’t seen her until recently.

As usual when Jaime was mentioned, Trick smirked devilishly at Dante, making the claw marks on his cheek darken. “Nope, not yet,” Trick answered, though his gaze hadn’t moved from Dante. “Who would’ve thought a slip of a girl could spook the normally unflappable you? It’s so much fun to watch.”

“She does not spook me.”

“Yes she does, she always has.”

Okay, that was true. When they were kids, Jaime had followed Dante around like a lost little kitten, trailed after him like he was the answer to all her problems. The guys had all thought it was hilarious that this short, plump little girl who was four years younger was crushing on him. She’d even played practical jokes on his girlfriends, and no amount of Trick’s teasing back then had made her stop. Apparently, she was immune to Trick’s nature. But Dante wasn’t, and because of Jaime he’d been subjected to daily doses of it.

Dante had expected that her crush would have died by now. Apparently not. She hadn’t flirted shamelessly with him or harassed him, but she had made her interest in him clear with bright smiles, subtle touches, and heated looks. Dante, however, had no intention of responding to her interest—

The Firebrand by Marion Zimmer Bradley
I Signed My Death Warrant by Ryle T. Dwyer
FRACTURED by Amber Lynn Natusch
Honest illusions(BookZZ.org) by [Roberts Nora] Roberts, Nora
Advice by Clyde by Amber Lynn
The Riddle of the River by Catherine Shaw
(Shadowmarch #2) Shadowplay by Tad Williams
Love Unexpected by Leigh, Anne
Slow Tango With a Prince (Royal Scandals) by Nicole Burnham
Meditations on Middle-Earth by Karen Haber
Our partner