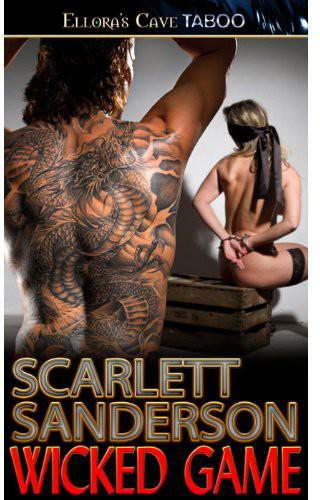 Wicked Game is the stand-alone sequel to
At Their Command
.

Ruth wants something wicked. Something a nice girl would never wish for—to be taken, tied up and forced into pleasure. Hands bound, mouth gagged, blindfolded—she wants,
needs
, to be utterly helpless as a man brings her to orgasm again and again. But not just any man. Ruth’s darkest fantasies always star Dominic Sullivan.

Dominic knows it’s wrong but he can’t help himself. Whenever he’s around Ruth, he longs to bend her over or force her to her knees, to give her pleasure and take his in return. After overhearing her confess that she wants someone to abduct her for raw, primal sex, he hatches a plan that will give them both what they most desire. It’s a wicked game they’re playing, a game Dominic plans to win. Especially since the ultimate prize isn’t just Ruth’s body—it’s her heart.

Warning: The unauthorized reproduction or distribution of this copyrighted work is illegal. No part of this book may be scanned, uploaded or distributed via the Internet or any other means, electronic or print, without the publisher’s permission. Criminal copyright infringement, including infringement without monetary gain, is investigated by the FBI and is punishable by up to 5 years in federal prison and a fine of $250,000.  (http://www.fbi.gov/ipr/). Please purchase only authorized electronic or print editions and do not participate in or encourage the electronic piracy of copyrighted material. Your support of the author’s rights is appreciated.

The publisher and author(s) acknowledge the trademark status and trademark ownership of all trademarks, service marks and word marks mentioned in this book.

The publisher does not have any control over, and does not assume any responsibility for, author or third-party Web sites or their content.

For you, K. I couldn’t do this without you.

My inspiration, my rock and my best friend. Thank you for the adventures and the ones yet to come.

I would like to thank my editor Carrie Jackson for all her hard work and encouragement. She always pushes my boundaries and makes me think of things I’ve missed. The best editor a kinky gal like me could ask for!

The café buzzed with the low hum of various conversations.

Ruth stirred the wooden spoon in her coffee, watching as the brown liquid swirled around the cup. “I want to be abducted.”

A high-pitched snort followed by a spray of liquid drew her attention. She looked up at her friend Hope.

“You what?” The look of horror on Hope’s face almost made Ruth laugh.

“Abducted. You know, like on those TV shows where someone arranges for you to be taken. It’s entirely safe. Like a game.”

“And why the hell would you want that kind of experience?”

Ruth had been asking herself the same question for weeks. Why did she want to be kidnapped, tied up and scared witless? Her body tingled. Her palms slicked. Nipples beaded behind the satiny fabric of her bra.

She shifted in her seat. It was the
tied up
part that turned her on. Being taken, bound and at the mercy of a gorgeous guy sent her hormones into overload. Not just any guy—one male in particular.

Shrugging, she answered, “To add some excitement to my life. Don’t you sometimes wish for wild, passionate sex? For raw, primal screwing?”

Hope’s cheeks pinked and her lips curled into a smile. “I kind of get all the raw and wild I need.”

Ruth rolled her eyes. Hope had been in a relationship with Ethan St. Claire for over a year and they were blissfully happy.

A stab of jealousy pierced her heart. She pushed aside the emotion. She shouldn’t be jealous of her friend. But deep down she ached for some happiness. Why couldn’t she have a taste?

Hope gently gripped her wrist. “I know it’s hard. It sounds like a cliché but there is someone for you.”

She wasn’t usually maudlin about her lack of a sex life but sometimes she craved the touch of a man. The absence of a male companion made her feel sad.

A deep voice interrupted their conversation. “Now that’s wrong on all levels.”

A shadow stretched across the table and Ruth looked up into the intense blue eyes of Dominic Sullivan. A thick knitted sweater encased his broad torso. A woolen beanie covered his long blond hair. Over six feet tall and muscular, Dominic ran the town garage with Ethan. She’d met him a few months ago and he’d immediately become the star of all her darkest fantasies.

Her mouth went dry. Heat slammed into her belly, beat a heavy pulse that moved lower into her pussy. “What’s wrong on all levels?”

“A woman like you should be having sex and lots of it.”

Heat rose in her cheeks. She’d embarrassed herself in front of her biggest fantasy and object of lust.

Prickling at his words, she straightened her spine. “It was only a statement.”

He was devastating when he smiled. She wanted to climb on the table and crawl over to him, wrap her legs around his waist, curl her hands into his luscious beard and lick his cheek.

“Maybe it should be my business.”

Ruth swallowed. “I don’t think so.” There had always been an undercurrent of sexual tension between them but this was the first time Dominic had been so blatant.

Anger flared in his eyes. Her heart pounded, blood roared in her ears. She glared at him and he glared back. His anger enhanced her desire. He appeared in every one of her abduction fantasies. Her kidnapper was always Dominic Sullivan.

Hope coughed, interrupting their stare-off. “So, how have you been, Dom?”

“Good. How about you? Ethan tells me you got him landscaping the garden.”

Ruth watched the exchange. She knew about Hope’s ménage with Ethan and Dominic. In some part of her soul, she was jealous. Not of Ethan but of the fact Hope had fucked Dominic. It was one of the reasons he would always be off-limits for her. She couldn’t have sex with a man who’d screwed her best friend. It would be…weird.

Still, ever since she’d laid eyes on him, she’d wanted him. Although reformed, he still oozed the bad-boy-biker image. Maybe the danger was the appeal.

Or maybe it was those tight buns, broad shoulders and chiseled torso.

Or maybe it was his eyes.

Maybe it was him.

“That sound good to you, Ruth?”

She forced her head back into the conversation and said, “Sorry, what?”

“Dinner. Tomorrow. At our place. I’ll cook up a roast and we can all catch up.”

No
immediately popped into her head but they were both looking at her expectantly.

“Okay.” The word dropped out of her mouth and she cursed silently.

Now she’d have to sit in a room with Dominic and pretend as if she didn’t want to strip him naked, cover him in chocolate and lick him clean. She didn’t know how much longer she could keep up the pretense before making a fool of herself.

The barista announced an order. Dominic turned and nodded. “Excuse me, ladies. I have to get back to work.”

He walked over to the counter and grabbed his espresso. Ruth watched the denim pull and tighten across the cheeks of his ass. She almost drooled. Almost.

On the way back, he leaned down and pressed a soft kiss on Hope’s cheek before doing the same to Ruth. His lips were hot. His soft beard caressed her skin. He lingered and she felt a quick flick of his tongue as he licked her cheek. Her libido roared to life, primed itself for his tongue to lick her all over.

As he stepped back, she blinked up at him. A grin sat etched on his face.

Dom downed his espresso and threw the empty cup into the trash can. The thick coffee burned a hole in his gut but failed to burn away the desire lodged in his veins. His cock throbbed.

He could still taste Ruth on his tongue. Her scent lingered in his nostrils, permeated his senses, made his balls ache. He wanted to go back inside, drag her into the bathroom and get his dick inside her.

Would she be wet for him? He hoped so.

He looked back into the café. Ruth was watching him. Her hazel eyes fixed on his every movement.

Jamming a helmet on his head, he swung one leg over the saddle of his bike and sat down. He winced, shifted in his seat, trying to get comfortable with the erection from hell.

Her words played over in his head like a record.
I want to be abducted.

And he wanted to be her captor.

Thoughts of binding her spread-eagle to his bed, of working her curves, of teasing her until she screamed his name, made him even harder.

He’d been harboring a torch for the town librarian since she brought her car into the shop to be serviced. Seeing her around town and at Hope’s house ignited the torch into a burning flame. Her body drove him crazy. Her smile made his heart turn over.

For the first time in his life, he was unsure about making a move. Would she want him? He thought that on a base, physical level she responded to him. He’d seen her nipples peak when he was near but she’d never really shown any other sexual interest.

Hope had surely told her about their encounter and everything else.

Maybe Ruth thought he was too much of a slut. He had a wild past, filled with alcohol, drugs, bikes and kinky sex. His tastes always ran to the extreme and sex was no different. He’d been a Dominant for a lot of women, fucked about the same. Threesomes, foursomes, group sex. He’d done it all. Even moving into town and opening the garage with Ethan hadn’t dampened his tastes. He’d still fucked whomever he wanted, whenever he wanted.

Until Ruth came along. The spunky town librarian who revved his engine and sucker-punched a hole in his gut the size of Texas. He’d sensed something in her, something that matched his own needs and desires. He wanted her so badly he ached.

He’d never been afraid to take what he desired. Yet with her he wanted to go slow. The Dominant in him clawed to take her but the man didn’t want to scare her. She was too important to rush things. He had to be sure of her needs.

He turned the key in the ignition and listened to the bike’s engine come alive.

He grinned. Now that he knew what she wanted, he was going to have her. He was going to give her exactly what she needed and then she’d see how suited they were.

Bidding On The Billionaire (The Sherbrookes of Newport Book 8) by Christina Tetreault
A Case of Doubtful Death by Linda Stratmann
The Intern - Full Submission by Laws, Tara
The Five Times I Met Myself by James L. Rubart
A Fresh Start by Martha Dlugoss
Lover Boys Forever by Mickey Erlach
To Kiss A Kilted Warrior by Rowan Keats
The Priest by Gerard O'Donovan
The Billionaires Mistress by Marie Kelly
ROMANCE: BAD BOY ROMANCE: M.V.B. - Most Valuable Baby (Sports Secret Baby Romance) (Contemporary Interracial Pregnancy Romance) by Lexi Ward
Our partner