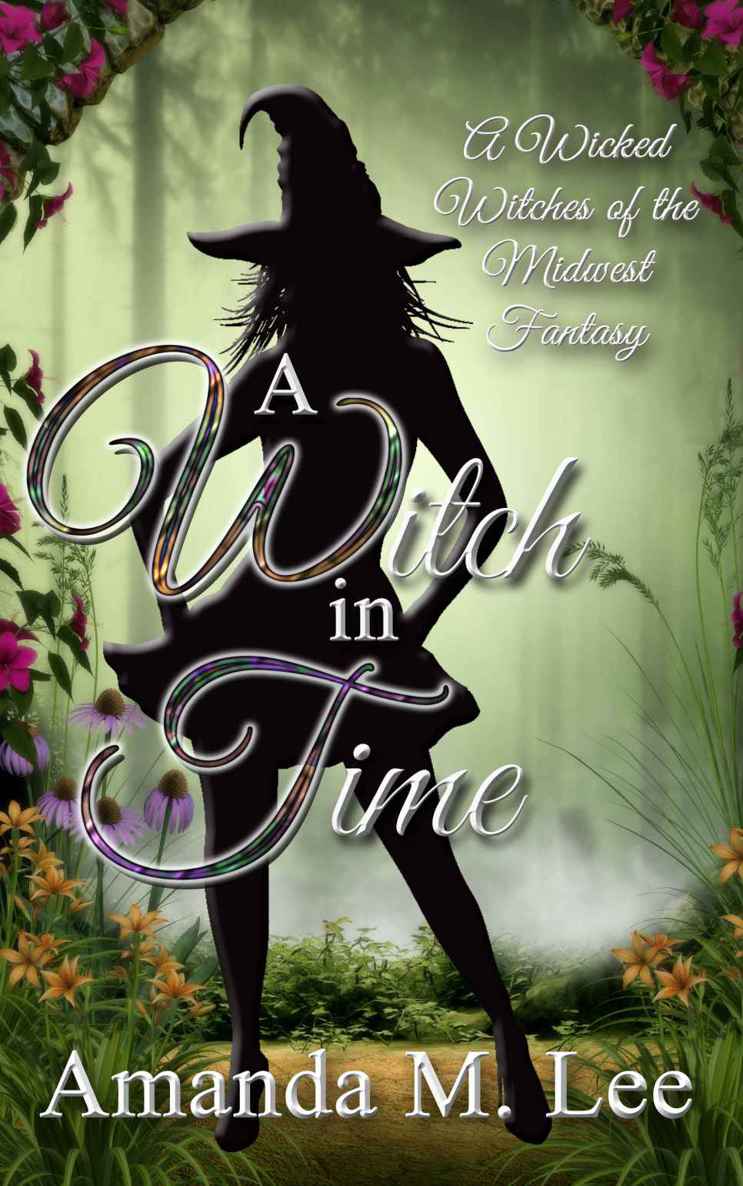 A WITCH IN TIME

A WICKED WITCHES OF THE MIDWEST FANTASY BOOK TWO

Growing pot is only illegal if you get caught. If you don’t get caught, it’s a hobby. As a worldly woman, of course I like having a hobby. Do you see me knitting? Those needle things are only good for stabbing someone in the neck. You not liking my hobby is merely a bonus. Think of it more as a second hobby.

T  he wind howled so loudly I thought the siding was coming off The Overlook. The storm raging through Hemlock Cove was a big one, and it was only supposed to get bigger – if the evening news was to be believed, that is.

I paced the lobby of the family inn, convinced my plans were a lost cause and I would be spending the weekend alone as I gnawed on my fingernails. I was about to pull my cell phone out of my pocket and place the inevitable call I’d been dreading for the last hour when the front door banged open. I initially thought it was the roof coming down, and jumped, instinctively moving away from the window. Instead of falling debris, though, I crashed into my boyfriend.

Landon Michaels, his long hair drenched and out of place, caught me before I could tumble backward. Despite his disheveled appearance, I’d never been happier to see him – and that’s a remarkable feat given the fact that he’s saved my life several times.

“I was worried,” I said, tossing my arms around his neck.

Landon returned the embrace even as he pushed the door shut. “I’m wet, sweetie,” he said. “Give me a moment to get out of this coat. I have dry stuff in my bag. At least … well … I hope it’s still dry.”

I didn’t break from the hug, instead tightening it. Landon ultimately relented and hugged me close.

“What’s wrong, Bay?” he asked, worry creasing his forehead when I glanced up and wiped the rain from his cheek. “Did something happen?”

I shook my head and offered him a quick kiss before taking a step back. He was right about me getting wet. I was officially soaked through the front. I didn’t care, though. “I was worried about you,” I admitted. “The television says they’re closing roads because of the storm. I thought maybe you wouldn’t make it.”

Landon technically lived in Traverse City, which was about an hour away from my home in Hemlock Cove in northern Lower Michigan. I say “technically” because he spends more nights here with me than in his own apartment. He goes out of his way to get here as often as possible – even when a storm threatens his journey.

“I’m an FBI agent,” Landon reminded me, a small smile tugging at the corners of his mouth. “A storm can’t stop me.”

He’s too cute and charming for his own good. Still, I was relieved to see him. “How are the roads?”

“Do you want me to lie so you’ll feel better, or tell the truth so I can get a lot of sympathy sex tonight?” Landon asked, his blue eyes twinkling.

That charm comes and goes … although I was so happy he was here I was probably going to give him as much sympathy sex as he could handle. “Lie to me.”

“The roads are great, sweetie,” Landon said, dropping his duffel bag on the lobby floor. The Overlook is co-owned by mother and her two sisters, and the guesthouse where I live with my cousin Thistle is located on the property. Our other cousin, Clove, recently moved in with her boyfriend, so we had more room than we were used to and it had become a struggle for guesthouse dominance – but that’s a story for another time. “I think they’re totally overestimating this storm. It’s not going to be bad at all.”

I narrowed my eyes, his words unconvincing even as he gave the lie his best effort. “The television said we could be in for a tornado or two,” I pointed out. “That doesn’t sound like they’re overestimating anything.”

Landon shrugged. “You said you wanted me to lie.”

“I changed my mind.”

“It’s not great,” Landon said. “I’m here, though. Even if the storm gets worse – which is pretty likely – we’ll be perfectly safe. We have each other … and if I’m not mistaken, I smell pot roast.” Landon lifted his nose as if he was a dog scenting his prey. “And chocolate cake.”

I couldn’t help but grin. He was nothing if not blessed in the olfactory department. “Mom cooked all of your favorites because she was worried about you making the drive, too. You know, it probably would’ve been safer for you to stay in Traverse City for the night. You didn’t have to come.”

Landon snorted. “Are you fishing for a compliment?” he asked. “Do you want me to say that I couldn’t stay away from you for even one night?”

“You stay away from me three nights every week,” I reminded him.

“Yes, but they’re torturous nights,” Landon teased, grabbing my waist and pulling me close. “Nothing could have kept me from this place for the weekend. I don’t want this to go to your head, but I’m pretty fond of you. In fact, there’s a rumor going around that I might love you.”

I cocked a challenging eyebrow. “A rumor?”

“I need to substantiate it,” Landon said, planting a scorching kiss on me. I was so lost in the moment I forgot he was soaked and a storm raged outside. That lasted only until someone cleared a throat behind us.

I swiveled, not surprised in the least to find my mother watching us with a dark look as she crossed her arms over her chest and tapped her foot. “We weren’t doing anything,” I said.

“Yes, I saw what you weren’t doing,” Mom replied, shaking her blond head. “Do you mind not doing it in a place where the guests can see you feeling each other up?”

She was in a foul mood. I saw her go through the inn on a tear an hour before, but I was so worried about Landon I didn’t give it much thought. The women under this roof – all four of them part of the wacky Winchester witch brood – tend to take their dinner theater seriously.

Yes, you read that right. My name is Bay Winchester and I’m a witch. All of the Winchester women are witches. We have magical powers and special abilities. We’re also drama queens and prone to histrionic fits. Hey, no one is perfect.

“What’s wrong?” Landon asked, girding himself for another Winchester family freakout. “If Aunt Tillie did something, tell me now so we can flee to the guesthouse. I don’t want to risk getting stuck here for the night if you guys are gearing up for the next world war.”

Mom made a face that would’ve been comical under different circumstances. Oh, who am I kidding? It was hilarious, and I had to press my face against Landon’s chest to keep from laughing. Landon rubbed the back of my head as he met Mom’s dark glare head-on. “She was worried about me getting here and she’s very snuggly tonight,” he said, not missing a beat. “That’s another reason we don’t want to get into it with you guys.”

“What are you going to eat if you run away to the guesthouse?” Mom challenged, refusing to let Landon get one over on her. “The only thing they have down there is a jar of pickles and a box of Twinkies.”

“Hey, I’ll have you know I can think of at least five things to do with those Twinkies,” Landon replied. “We can live on Twinkies.”

“And love,” I added, giggling when he poked my ribs.

Mom rolled her eyes, although a hint of a smile flitted across her face before she vanquished it. “For the record, nothing is wrong,” she said. “I need Bay to do a favor for me before dinner, though.”

“What favor?” I asked, straightening.

The Emperor Awakes by Konnaris, Alexis
Death of a Hussy by Beaton, M.C.
Britt-Marie Was Here by Fredrik Backman
Meat by Opal Carew
Forged in Blood I by Buroker, Lindsay
The Bear's Bride (Mail-Order Mates #3) by Lola Kidd
Be My Enemy by Ian McDonald
literal leigh 05.7 - mission impawsible by james, melanie
You Had Me at Merlot: Part 2 by Lisa Dickenson
The Italian Surgeon's Christmas Miracle by Alison Roberts
Our partner