Wifed By The Mountain Man: A Modern Mail-Order Bride Romance 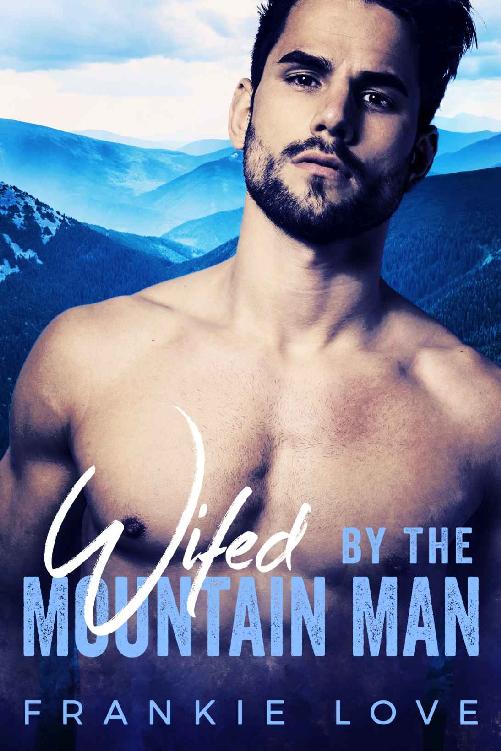 READY FOR ANOTHER MOUNTAIN MAN?

AND NEVER MISS A RELEASE!

Edited by
Larks and Katydids

G
rabbing
the Prosecco from the fridge, Everly finds three mason jars, pops the cork, and divvies up the bubbly. The goal tonight is to forget the reality of the situation she and her two best friends have found themselves in.

Champagne will certainly help the cause.

“Is that the last bottle?” Delta asks, as Everly balances all three glasses in her hands and walks back into the living room.

Everly moans as she delivers the drinks. She’s wearing her hair in a messy bun and her nerd-girl glasses contribute to her low-key appearance. But tonight she isn’t acting low-key. Tonight she is dramatic and drunk.

A dangerous pairing for any twenty-two-year-old woman.

“The state of my checking account was so depressing I was like,
eff it
, and bought two more bottles,” she says.

“That’s what I love about you, Everly,” Delta snorts. “You’re just so damn responsible.” She takes the glass from Everly’s hand and sets it on the coffee table before screwing the cap back on a bottle of eco-friendly nail polish. She’s just painted daisies on her big toes, as if declaring herself the ultimate flower child. Her long hair and boho dress complete the look. She’s a vegan, through and through, and living in Portland, Oregon makes her lifestyle easy.

Clinking the rims of their glasses, Everly takes a long sip. “I know, it’s hard to be such a put-together adult, but somebody has to do it.” She smirks, knowing she’s anything but put-together.

“No, but like, for reals, what are we going to do?” Amelia, who is braiding her hair, asks. She’s in ratty sweats and a tank top, but she gets a pass considering Derrick, her boyfriend of four years, just broke up with her. “I mean, all of us were legit counting on staying at Derrick’s summer house for the next three months. Now we’re going to get kicked out of here in a week. Then what?”

“Calm down. It’s all going to work out,” Everly tells her, not believing the words herself, but knowing Amelia needs the affirmation—considering she’s the one recovering from an unexpected break-up.

Everly falls onto the couch, squeezing between her two best friends. They all take drinks of the bubbly, each lamenting their own personal hell.

They aren’t exactly on top of the world. And they feel deceived. The entire universe led them to believe that if they went to college they would be grown-ups. But here they are, all three of them a week out of Oregon State College, with no job prospects, no boyfriends, and—apparently—no housing.

“This sucks,” Amelia says, her head falling on Everly’s shoulder. “Why didn’t a career counselor ever mention the fact that a Fine Arts degree wouldn’t help me? All it did was teach me that I’m more of a hobbyist in terms of creating visual masterpieces. Like, I can legit scrapbook, but that isn’t a job.”

“Um, sweetie,” Delta says, “my degree is in Hospitality. There are literally no jobs for me.”

“You can be a hotel desk clerk,” Everly suggests.

“Yeah, except I didn’t need a degree for that, and it won’t offer me health insurance or pay my student loans. It’s not realistic.”

“I know,” Everly says. “Even if I sold a story to some magazine, I’d make what—fifty bucks if I was lucky? And I can’t afford to sit here and write the next great American novel. That won’t pay any of the bills.”

Everly thought a degree in English Literature would help her become a writer, but so far she’s only completed a few short stories about her life as a college student. Not exactly inspiring.

“At this point I would do anything to stop feeling so out of control. I just want a plan,” Amelia says. “I feel desperate.”

“Then we should have gotten MRS degrees, not BAs,” Everly says, sighing into her champagne. “Not that I’m exactly ready for marriage.”

Delta and Amelia both look at Everly, giving her puppy dog eyes. It’s no secret that she’s a virgin, and if anyone needs a man, it’s her.

“What?” Everly shrugs. “I’m not holding out for Mr. Right. The problem is, I’m just never going to meet a guy who is okay with taking it slow.”

“You don’t need to take it slow,” Amelia says. “You need a man who isn’t going to take no for an answer.”

Amelia shoves a pillow in Delta’s face. “Yes, we get it. You want to get laid. But on a more serious note, maybe there are new apartments on Craigslist?” Amelia suggests. “You know, since we’re getting evicted.”

“Not evicted,” Everly reminds her. “It’s just we’re in campus housing. We have to go.”

“Like, in a week.” Delta sighs. “This is dumb. Let’s do something bananas. Like, move to a commune. Or become Amish.”

Noticing the now-empty glasses, Everly returns to the kitchen and brings back some more champagne. “I just want a nice house and a normal life. Nothing crazy, just something regular.”

“With good sex,” Delta adds, winking. “And on that note, let’s look in the Help Wanted section with an open mind.” She opens her laptop. “At this point we don’t have many requirements.”

“I just want to get out of this college town,” Amelia says. Forgoing a glass, she grabs the bottle from Everly’s hand and takes a swig. “I can’t handle it here,” she says, wiping her mouth. “There are way too many memories of Derrick and me in this town, and I need to move on. Stat.”

“Hmmm.” Delta keeps clicking, but there are no new listings. Eventually she takes the bottle from Amelia and drinks before passing it to Everly.

Everly follows suit, then sits between them once again, starting to feel more than a little tipsy.

“Even if there were,” Everly adds, “it doesn’t matter. None of us have jobs. That’s priority number one.”

“Tell me again why none of us have parents who can help out?”

The three of them were roommates freshman year, and instantly bonded over the fact they’d all been raised by their grandparents. It was such a coincidence—it felt like destiny, and they had to stick together.

And they always did, through thick and thin, for four years. They put Delta’s grandpa in assisted living, attended the funeral for Everly’s grandma and grandpa, and were there when Amelia’s grandma moved in with her older sister.

They have family that love them, but not family that can support them, or even house them.

It’s time they figure this out on their own.

“Okay, go to the want ads,” Everly says, pointing at the tab on the screen.

The three of them read the job descriptions, not one of them remotely appealing.

Editor, must be proficient in Dutch.

“Well, we could do that,” Delta says, laughing. “We all have decent racks.”

“More than decent, but that doesn’t mean I could do it,” Everly says, frowning, knowing her looks have never been her problem.

The problem is, she’s never had a real boyfriend because she always gets so nervous and shy around guys.

“We’re all cute enough so the tips would be good,” Amelia says, considering the smoothie stand position. “But, it just seems so cold.” She covers her chest with her hands, cracking up.

Okay, so they are definitely buzzed.

“This is stupid.” Everly hovers her fingers over Delta’s keyboard. “Let’s try something totally different.”

The first hit causes all three girls to tilt their heads to the side, and reach for the champagne, simultaneously.

Never Say Goodbye by T. Renee Fike
Crimwife by Tanya Levin
The Santa Society by McCord, Kristine
Crying for Help by Casey Watson
Court of the Myrtles by Lois Cahall
Fifteen Weekends by Christy Pastore
The Best of Men by Claire Letemendia
Ice Creams at Carrington’s by Alexandra Brown
The Scandal (Billionaire's Beach Book 4) by Christie Ridgway
A Daring Proposal by Sandra S. Kerns
Our partner