Read Wild Is the Night Online

Wild Is the Night 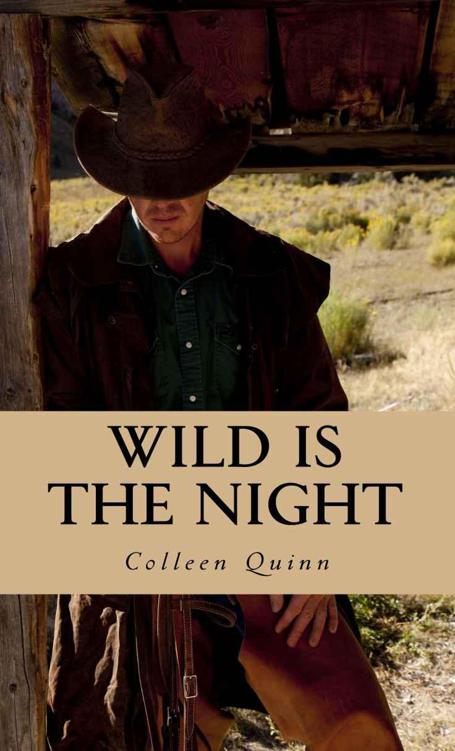 For my brother Jack,
who made me laugh
when I needed it most.

Special thanks to Gary and Lisa Rainey, who shared their cattle ranching experiences with me.

To my daughter Erin, who knew that owls ate mice.

And to Leslie Gelbman and Gail Fortune, for their talent and enthusiasm.

The air was thick with tension as Logan Benteen stepped from the porch of the Silver Spur Saloon, his gun hand resting lightly on his holster. He was dressed in black, from his weather-stained trousers to his dyed cotton shirt and his Stetson. Sand blew down the street, glittering like gold dust in the hot Nevada sun. The windows remained shut, the curtains drawn; except for one window, which was open, high above the bar. A young woman stood there, motionless, frozen with fear. She tried to scream, but the sound died in her throat as the outlaw walked down the empty road kicking up small puffs of dust with his spurs.

“You coming out, Haines? You’re gonna be sorry if I have to come in after you.”

A man emerged from the shadows, his face hidden by his hat. “What the hell—”

“Draw, Haines.” The black-garbed man spoke softly, continuing to advance. The woman at the window choked as the distance closed between the two men. The one stalked the other like a cat playing with a sparrow—knowing, inevitably, what the final result would bring.

“I ain’t got my gun. You can’t do this, Logan. I’m unarmed. See?” Haines displayed an empty holster.

Logan grinned. The woman at the window could see the flash of yellowed teeth beneath the black Stetson. He paused for a moment, as if considering his options, then his hand swept downward so quickly that the woman saw only the blur of motion. Suddenly, she heard a gunshot, saw Logan’s knees bend, smelled smoke in the late afternoon breeze. Haines crumbled, his mouth sagging. His gun hand grappled uselessly for a weapon that wasn’t there.

The woman at the window cried out, no longer able to restrain herself as the stench of gunpowder and death stung her nostrils. She had witnessed a killing a cold-blooded murder. Pressing her hands to her mouth, she froze in horror as the outlaw’s eyes drifted upward, then locked with hers. For a split second, she couldn’t move as his black eyes wandered over her, memorizing every detail of her face, her smooth brown hair, her blue cotton dress. Logan cursed, his gun still smoking then started for the building where the woman watched him.

She had less than a minute. Forcing her body into motion, she plunged beneath the bed, her heart pounding. She could hear the killer’s boots as the man slowly climbed the stairs, then paused at the door. Her breath stopped as the door creaked open, taking a lifetime, throwing a sinister triangle of light on the wooden floorboards.

The boots were black also, smooth from horse hides and covered with a light film of dust. The silver spurs jingled as he stepped into the room and stood just inches away from her. She dared not move, dared not breathe. Her blood seemed to dry up in her veins as she sensed him searching the room, looking for his quarry. Any minute now he would stoop down, peer under the bed with those deadly black eyes, and then kill her, just as mercilessly as he had killed the man outside. She would be dead, would never see the sun again, smell a flower, love a man or a child…

The bed creaked as he leaned on it, pressing his weight against the mattress with his hand. His body lowered. In a moment, it would be over….

Logan hesitated, then cursed as the voice cried again: “Logan!” Unbelievably, his body straightened, then he crossed the room, the spurs clinking against the floor. Whatever he saw outside must have convinced him, for he climbed through the window, stepping easily through the frame, his lean, dangerous presence vanishing from the room. Only the scars on the floorboards evidenced that he had been there at all that her life could have ended….

Amanda Edison closed the book, wincing in self-criticism and the terrible consciousness of seeing her own words in print. Stuffing the cheap novel inside her ink-stained pocket, she gazed out the window of the moving train. Papers, scribbled one-liners and painstakingly researched notecards, tumbled onto the floor from her overstuffed carpetbag, and with a sigh, she bent to pick them up, almost losing her glasses in the process. Her light brown hair tumbled out of its prim knot, falling all over her neck like spun brown sugar. She shoved it back in exasperation, oblivious to her unkempt appearance. Something rustled in the covered bird cage beside her, and she lifted the canvas hood and spoke quietly to the indignant barn owl. When the bird was comfortably settled, she glanced around the interior of the coach. It was a small train without a caboose and was nearly empty. Only two passengers, a businessman and his female companion, talked quietly in the seat across from her. Amanda dipped into the fold of her navy stockings, withdrew a letter and read it again, her blue-green eyes scanning the document while her brow puckered in thought.

“…while it is good, it is simply not realistic enough to be literature. Perhaps you are working too hard, Amanda. Or maybe you should be content with your success as Fess Tyson. Your westerns certainly sell well enough, within the limitations of the audience.

“Should you still desire to pursue a career as a literary writer, I do have a suggestion. You need to see what you are writing about, to research beyond the confines of your library, which I understand is excellent. I’m not suggesting that you endanger yourself in any way. I know that since your father’s death, you are living quite alone. However, a trip may be the answer. I know that one of your fans deeded a piece of property to you, in Texas, I believe. Perhaps you should visit the place. It is only a suggestion, Amanda. I know that you don’t get around much, and such an idea may not be within your boundaries. However, most of my better writers stick to what they know…”

The rest was too painful to read. Amanda once again experienced a sharp stab of disappointment, then folded the tear-stained letter and placed it back in her stocking.

She had no choice. All of her education, all of her research, all of her years of careful work, writing and rewriting, editing, checking places, dates, locations, then double checking them…all of it amounted to nothing. She had spent her life bent over her Remington typewriter, the gaslights burning well into the morning, trying to perfect her work, yet she still couldn’t achieve the recognition that had become so important to her.

Her brother Jeff would have laughed, ruffled her hair, and informed her that it didn’t matter in the least. Even when they were children, he would teasingly call her a bluestocking and try his best to entice her into what he deemed more appropriate activities for a young girl, such as ice skating on a frozen New England pond, snowball fights, dances at the local town hall. Amanda, unaccustomed to any such frivolity, felt awkward and out of place. She didn’t know how to skate, couldn’t dance to save her life, and none of the young men wanted her for a partner anyway. None thought her pretty, or even passable. She did not fit the beauty ideal of the time, the blond-haired feminine woman, “head no higher than my heart.” She was a brunette, and her eyes were blue-green, a bewildering shade. They stared too directly from her tortoiseshell glasses, showing an intelligence that wasn’t fashionable. Her nose was fine and straight, sprinkled with freckles like a plover’s egg, and her mouth was too tight and too tense. Yes, Amanda was no beauty, and it was only because she was Jeff’s sister that the boys treated her kindly at all.

Her cheeks burned as she remembered. It was only in school that she felt wanted and appreciated. There she could compete and win, for she had discovered early on that she had a brain, if not beauty. She devoured Shakespeare, Milton and Dickens. She read everything, from mathematical treatises to romantic poetry. And it was there she discovered a way to make a living, writing penny dreadfuls under the male pseudonym, Fess Tyson.