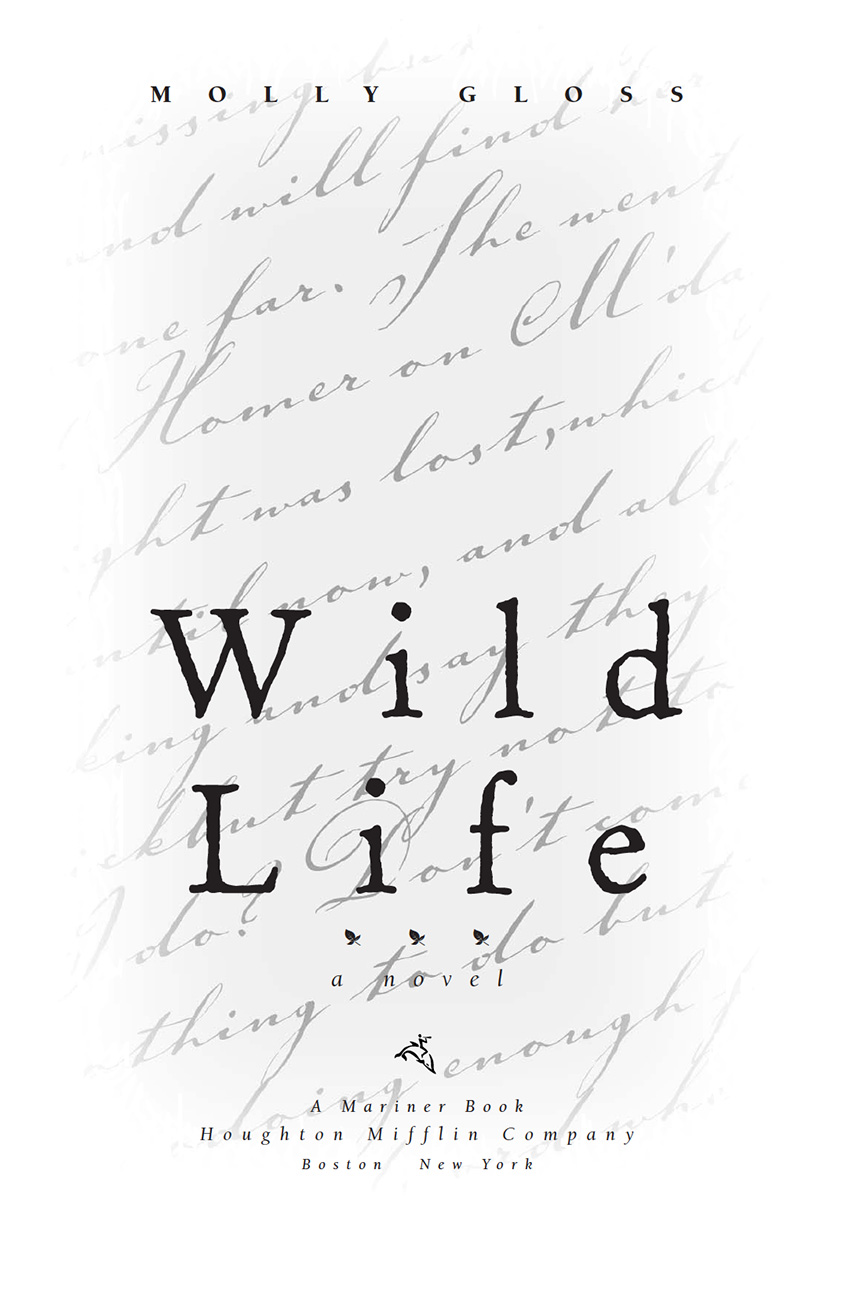 Evening of the 2nd (Yacolt)

Afternoon of 3rd (top of the flume)

Camp 8 (deepwoods), midnight of the 3rd

In the log camp (deepwoods), morning of the 4th

In the lava fields (morning) 5 Apr

In the lava, night of the 5th

Alone in the deepwoods, night of the 6th

Cold, windy (have lost track of the date)

Morning clouds breaking through to a fair afternoon

Evening, under a fair sky

Monday, 5 June (at Etna, waiting for the Mascot)

A Conversation with Molly Gloss

Reprinted by arrangement with Simon & Schuster

The Library of Congress has cataloged the print edition as follows:
Gloss, Molly

The author wishes to thank Literary Arts, Inc., for their financial support during the writing of this work; Cottages at Hedgebrook, for a nurturing residency early in the life of the novel; and the Mrs. Giles Whiting Foundation, for their very generous gift.

Thanks to Irene Martin, who steered me toward a more accurate description of the terrain around Skamokawa (though, of course, any remaining errors are mine).

For helping this poor lost book find its way out of the woods, I am deeply grateful to the Truthful Trio, and also to my literary agent, Wendy Weil, and my editor at Simon & Schuster, Roz Siegel.

For my sister, Pat Zagelow

The events in this book are entirely fictional, all its people imaginary. Certain thoughts and attitudes shared by many turn-of-the-century women writers have been shamelessly placed in Charlotte's mouth or upon the pages of her journal without attribution to the actual women who thought and wrote them.

Though much diminished from their heyday at the turn of the century, Skamokawa and Yacolt, as well as other named towns of southwest Washington State, are yet living communities, to which, in both history and landscape, I have been largely faithful. Certain bits of gossip and anecdotal stories (dates and details often recast) have been gathered from a variety of local sources, including especially
Battleground .Â .Â . In and Around,
by Louise McKay Allworth, and
Skamokawa: Sad Years, Glad Years,
by Irene Martin.

I am indebted to Robert Michael Pyle for his nonfiction exploration of the mystery of wilderness,
Where Bigfoot Walks: Crossing the Dark Divide,
and to the poet Pattiann Rogers for “Rolling Naked in the Morning Dew,” and to T. H. White for
The Bestiary: A Book of Beasts, Being a Translation from a Latin Bestiary of the Twelfth Century.

There were giants in the earth in those days; and also after that. 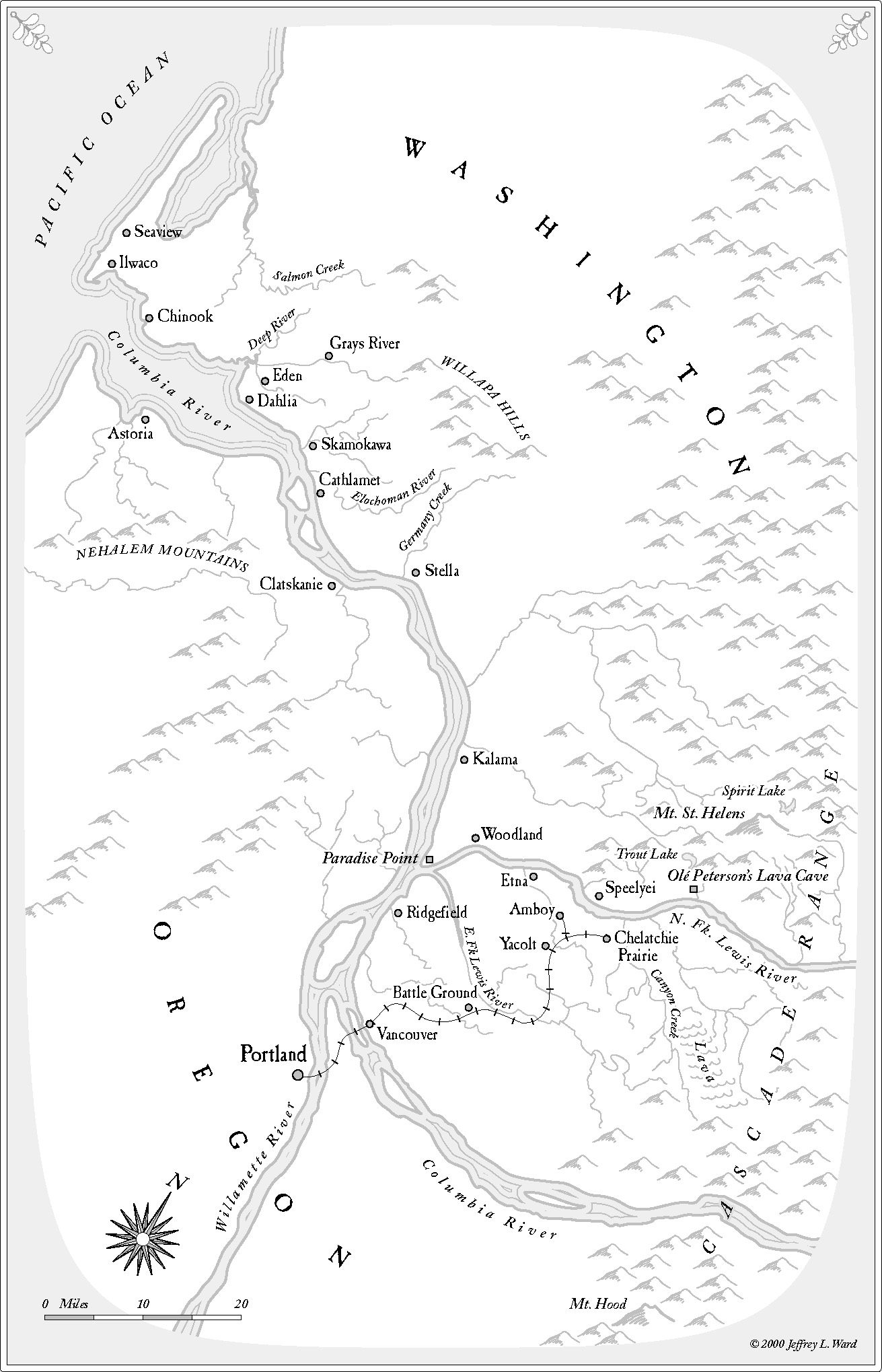 You said you wanted to see the whole thing just as I found it, so it's un-messed with, except I'm the one who rubberbanded it with cardboard. The notebook, when I found it, was tied together with rotting string inside a rotting manila folder and lying in a bottom drawer, along with tax returns and receipts dating back to the sixties, in one of my dad's five (five!) highboy dressers. (I saved the string and the folder, in case you meant the “as is” literally.)

It's mostly (apparently) a diary. Some of the diary pages were torn out and stuck in at other places, so the dates are not entirely consecutive; and there's a bunch of other stuff interleafed too. Some of this “stuff” I know you'll recognize as coming from Grandmother's published writing; some others I think might be pieces of unfinished stories of hers (early drafts or experimental writing), but I could be wrong about that. The smaller scraps of paper shoved in between the pages are mostly quotations from various people, newspaper clippings, that kind of thing.

I almost started in rearranging the diary by the dates and pulling out the little scraps of paper, so I'm glad I called you first. After we talked, I sat down and read the whole thing through, just as it was, which you'll find is uphill work, her handwriting always scrawly, of course, but some of this the worst I've seen, besides age-faded, water stained, and so forth, and even the diary has a lot of scribbled revisions between the lines and in the margins (which I guess should have tipped me what I had). Anyway, I did start to see a kind of order to the arrangement of it all, which is why I think your first guess was right and this
was something Grandmother was working onâwhether as memoir or allegory or novel or who knows?âand for whatever reason, it never was finished, and obviously never published. (If the diary isn't a fictional invention, but her own, her
actual
diary, and she was thinking of using it as the foundation for a memoir, then I can imagine a couple of good reasons she may not have gone ahead with it, and why Dad kept it in a drawer and didn't tell me he had it.)

I know you said any papers I found among Dad's things should probably go to the university for their archive, but now I'm kind of thinking somebodyâa feminist press?âmight want to publish this if we could get it into a little better shape. I know Grandmother isn't as famous as Kate Chopin or “that other Charlotte” (as Dad used to call Perkins Gilman), but I would think people would find this story interesting just on its own merits.

Of course, we don't know whether she meant this as a true account of what happened (as in socks knocked off), but why should we have to answer the question? Unless you think people would think she was crazy, in which case maybe someone (not naming any names, but you know who you are) could write a biographical introduction. We could say Charlotte was apparently planning to use her “great adventure”âsearching for little Harriet Coffeeâas the basis for a novel, a metaphysical (metaphorical?) adventure-fantasy, maybe, which was certainly popular in those days. (Or something else; I would leave it up to you.) That would bring in the women's studies angle, the “glimpse of a writer's creative process,” and so forth. And of course you could point out (again) that it was after Grandmother went up into the woods looking for Harrietâor rather, after she came homeâthat her writing turned a corner and her reputation as a serious writer was made (though by now she's not on anybody's radar screen except yours, and the vaunted few in women's studies, and don't get me started on that).

Anyway, it's just a thought. If you don't think it will interest a publisher, you should tell me (I trust your judgment), and we'll go from there. You've already written the Great American Dissertation on Charlotte Bridger Drummond, but at the very least there should be a journal article in this stuff somewhere, which might help you get tenure. (Ha!) Call me when you've finished reading it.

To write, I have decided, is to be insane. In ordinary life you look sane, act saneâjust as sane as any mother of five children. But once you start to write, you are moonstruck, out of your senses. As you stare hard inward, following behind your eyes the images of invisible places, of people, of events, and listening hard inward to silent voices and unspoken conversationsâas you are seeing the story, hearing it, feeling itâyour very skin becomes permeable, not a boundary, and you enter the place of your writing and live inside the people who live there. You think and say incredible things. You even love other peopleâyou don't love your children and your husband at all. And here is the interesting thing to me: when this happens, you often learn something, understand something, that can transcend the words on the paper.

Stepbrother's Kiss by Blake, Penny
Puzzle: The Runaway Pony by Belinda Rapley
Lulu Bell and the Cubby Fort by Belinda Murrell
The Broken String by Diane Chamberlain
A Stolen Heart by Candace Camp
Putting Out Fires by Marie Sexton
Maid for Hire & Educating Australia by Montgomery, Capri
Handy in the Bedroom by Rein, Cynna
Execution: A Guide to the Ultimate Penalty by Abbott, Geoffrey
Kolyma Tales by Varlam Shalamov,
Our partner