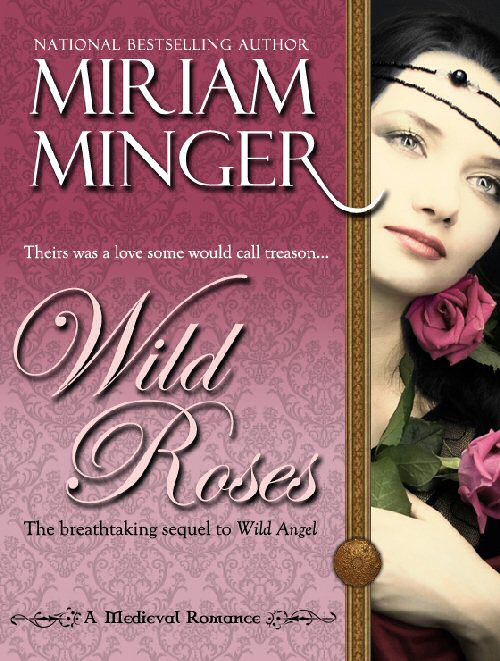 “Miriam Minger is a master storyteller who illustrates
the full gamut of emotions felt by her characters
.

Emotions so strong that you are pulled
into the pages and into their lives.” – Inside Romance

With
the exception of quotes used in reviews, this book may not be reproduced or
used in whole or in part by any means existing without written permission from
the author.

This is a work of fiction
.

Any references to historical events,
real people, or real locales are used fictitiously
.

Other names, characters, places, and
incidents are the product of the author’s imagination, and any resemblance to
actual events or locales or persons, living or dead, is entirely coincidental.

A Hint of
Rapture

Near the Hill of Tara, Meath

The moment he ducked his head inside the fire-blackened
hut, a scream rent the air.

Terrified. Shrill. Fading into frantic whimpers as the
girl, her eyes filled with stark fear, clung to her weeping mother.

Cursing again that he'd come too late, Duncan
FitzWilliam could see the girl was dying. Thirteen years old, perhaps, no more,
already her tear-stained cheeks bore an ominous pallor, as glaring to the eye
as the brilliant red blood soaking the lower half of her gown. Forcing back the
fury that threatened to engulf him, he moved slowly to the girl's pallet but
stopped when she made to shriek anew.

"Woman, tell her I mean no harm,"he said to
the mother who stared up at him with fear in her own eyes though she hugged her
child fiercely. "My men and I—we've come to help."

"Help, lord?
"
Her
voice hoarse, breaking, the Irishwoman looked from him to her ravaged daughter's
face, her work-worn fingers caressing an ashen cheek with heartrending
tenderness. "You can't help my Uta . . . not you, not the priest . . . not
the angels above—ah, God!"

As the woman's sobs filled the hut, her dying
daughter's whimpers become as weak as her labored
breathing,
Duncan felt his rage grow hot and deep once more that an innocent should so
suffer.

Yet thus it had always been. The innocent suffered and
the ruthless trod them like dust under their heels. But not this time. Not on
his land. Not while he held
breath
.

"Come.
"
He knelt and
gathered the girl in his arms before the Irishwoman could protest, and so
gently that she stared at him in teary-eyed astonishment. She could but hasten
after him as he rose and carried his broken burden outside into a spring
morning so gloriously sunny that it seemed to mock her sorrow.

Mock, too, the ring of smoldering huts, sunlight
dancing upon scorched earth and slaughtered sheep and chickens. Fortunately for
the Irish tenants, most had escaped into freshly sown fields of wheat and rye
when the three rogue Norman knights had come upon the tiny settlement. Fled for
their lives, a few panicked souls reserving enough presence of mind to alert
him at Longford Castle. But it hadn't been swiftly enough for young Uta, whose
slender body had borne the worst of the knights' brutal attack while her mother
had been made to watch helplessly.

"Yes, Baron, I come! I come!" A stout man
with a wide, kindly face came running, his monk's robe held above his knees.
"I've done what I can for the few wounded—"

"Good. Tend to the girl and give comfort to her
mother. Take them away from here, to the stream. The girl should have some
peace—"

Duncan glanced at the Irishwoman, her face filled with
such hatred that he knew she had spied the three prisoners slumped to their
knees near the horses.

"Unholy bastards! God's curse upon you! God's
curse for what you've done to my Uta!"

She flew at the closest prisoner so suddenly that Duncan
couldn't have stopped her, but he hadn't thought to try. Nor did he signal for
any of his men to wrest her away from the bound Norman knight who bellowed in
pain as she raked her nails down his face.

As the woman's enraged shrieks filled the air and the
two other prisoners clamored for mercy, horses stamping their hooves and
whinnying in fright at the din, Duncan cradled the girl who moaned piteously in
his arms. It was more for her sake than the prisoners' that Duncan finally
nodded for one of his own knights, Gerard de Barry, to stop the frenzied
attack.

A moment longer and he had no doubt the woman would
have scratched out the Norman's eyes which, in truth, made no difference to
him. His prisoners would have no use for sight where they were bound.

"Go, Clement, take the girl," he quietly bade
the friar. With a cry the mother shrugged free of Gerard's hold and ran to
clutch her daughter's limp hand as Clement set out for the stream, though just
before they disappeared into the trees, the Irishwoman glanced over her
shoulder and met Duncan's eyes.

He saw fear no more, only a burning
look
of comprehension as if she sensed what lay ahead. And a flicker of gratitude.
But Duncan turned away, his purpose not wholly to avenge her dying daughter.
His grip tightening upon the hilt of his sword, he gave the barest nod to his
men. At once the prisoners were hauled to their feet, all three swaying more
from drunkenness than any rude handling.

Fools. Sotted with ale, they had raped and plundered,
and so they had been captured, sleeping off their cruel deeds along the same
stream where Clement had taken the girl. For such witless folly alone, they
deserved no pity.

Duncan's growled command might have been a dousing of
ice-cold water for how sober the prisoners suddenly appeared
,
their expressions incredulous as thick twists of rope were yanked down over
their heads.

"M-my lord, s-surely you misspoke," cried out
one stricken knight, only to wheeze and cough at the noose pulled taut around
his neck. In desperation another man began to fight his captors, while the
third, looking the worse for the Irishwoman's attack upon his face, nonetheless
drew himself up in belligerent fury.

"You cannot hang us without a trial, FitzWilliam!
We've rights, damn you, not like these Irish dogs you treat as if they were
your own kind!"

"Rights?" Duncan's laugh was harsh. "You
lost all rights, man, when you chose to take up arms two years ago against King
John." Unmoved that one of the doomed knights began to retch over himself,
Duncan watched grimly as the ropes were tossed over a massive oak limb.
"Pity that you didn't flee to France then with the earls de Lacy and their
traitorous vassals instead of remaining to wreak havoc upon my land—"

"Your land, you half-Scots bastard?" His eyes
bulging in rage, the man's voice rose to a rasping scream. "Walter de
Lacy's land, no matter that accursed king across the water parceled it out to
the likes of you. And there's scores more like us in Ireland who'll not let you
forget it!"

"Then they'll join you in hell. No one destroys
what is mine, or does harm to those under my protection and lives to tell of
it.
No one
."

Duncan wasn't surprised by the vehement oaths hurled at
him, nor at how quickly they ceased in stricken disbelief when he glanced at
Gerard de Barry, the tall, russet-haired knight shouting an order to the men
holding a trio of impatient horses. Sharp slaps on the rump were heard,
then
the ropes sprang taut, Duncan not taking his eyes from
the three Normans as they writhed and jerked high in the air, legs kicking,
tongues swelling, and faces turning blue.

A few moments, no more, and life was gone, a question
in Gerard's eyes as he approached Duncan.

"No, let them rot there," he said before a
word was spoken. "As a warning to both Irish and Norman. I guard well what
is mine."

Duncan turned and strode for his horse so suddenly that
the Irish tenants who had circled close to watch the hanging fell back and
crossed themselves as he passed by, which made him smile grimly. No matter he had
come to their aid, any Norman to these stubborn, unruly people remained one of
Satan's own sons, and it didn't help that he bore the dark looks of his Scots
mother. But his smile faded when a wild keening carried from the direction of
the stream, which meant only one thing.

The girl was dead. His throat grown tight, he muttered
a terse prayer and mounted.

Near the Wicklow Mountains

"Begorra, Maire O'Byrne, have you ever seen a more
glorious morning?"

Doing her best to smile, Maire glanced at her older
brother Niall, his broad grin tugging painfully at her heart.

"Has the air ever smelled sweeter? Fine spring
sunshine, a sound breeze coming down from the mountains. It's giving me an
appetite, that's what it's doing. Aye, big enough to eat one of Ronan's prize
cattle!"

As laughter rumbled from the eight O'Byrne clansmen
bringing up the rear, their horses trotting two by two behind her and Niall's
mounts, Maire hoped Niall wouldn't sense her growing unease. Jesu, Mary, and Joseph,
she couldn't tell him now. If she did, he might ride back to Ferns, and what
good could come of that?

Her hand trembling slightly at the thought, she swept a
midnight strand from her face and fixed her eyes upon Niall.

Nearly twenty-seven, he had never looked more handsome
or more full of life, his blue-gray eyes dancing as he rode beside her, the
sunlight catching glints of red in his dark brown hair. Maire knew he was
thinking of Caitlin MacMurrough.

Almost a dozen times now over the past two years they
had visited the beautiful daughter of Donal MacMurrough, the most powerful
chieftain of the MacMurrough clan, at her father's stronghold in Ferns. An
amazing thing, too, Maire thought with fresh heartache as Niall fell back to
laugh and talk with their burly clansman Fiach O'Byrne and the others, leaving
her to lead the way across a vast meadow sprinkled with wildflowers. The
MacMurroughs had long been enemies of the O'Byrnes, until the day the two clans
had joined forces to rescue Triona, her eldest brother Ronan's spirited wife,
from Dublin Castle.

The Eden Tree by Malek, Doreen Owens
Heidegger's Glasses: A Novel by Thaisa Frank
Through a Narrow Door by Faith Martin
Lucky SEAL (Lucky Devil #2) by Cat Miller
Epic Retold: The Mahabharata in Tweets by Chindu Sreedharan
The Book of Small by Emily Carr
Father to Be by Marilyn Pappano
Rogue by Cheryl Brooks
Players by Don Delillo
Misery Loves Company by Rene Gutteridge
Our partner