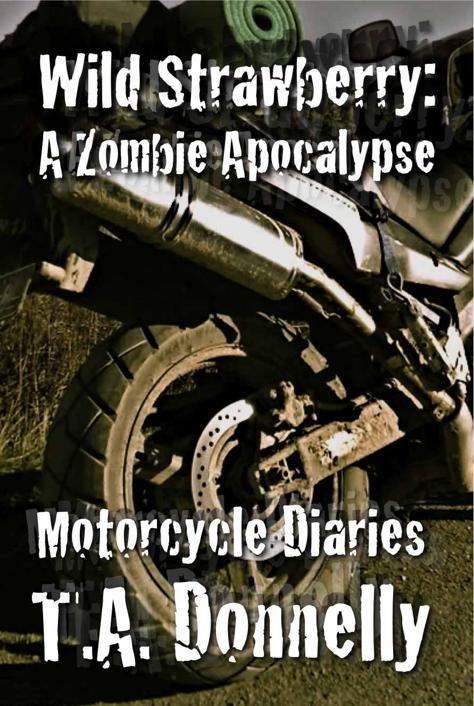 All rights reserved
No part of this publication may be reproduced or transmitted by any means, electronic, mechanical, photocopying or otherwise, without the prior permission of the author

For Fiona,
without your help
none of this would make sense.

I cut thousands of words from my first drafts in the editing process, and most of what is removed doesn’t deserve to see the light of day (I blush when I think of the sex scenes in Book Three!).  ‘The Motorcycle Diaries’ are different.  This strand from Book Two was deleted because there was ‘too much going on’ and the book was losing focus.  Book One has several strands that ‘go nowhere’ as humanity falls to the zombie virus; I wanted book Two to spotlight the survivors who end up in the Bunker.  I liked the bikers and I liked the situations I placed them in, but they were a distraction from the main story.

At almost 11,000 words it made up around 20% of the novel!  So here, as a separate story (perhaps best read as an interlude between Books One and Two) I present the Motorcycle Diaries:

Joe was a biker.  But he was as far from the unshaven ‘Hell’s Angels’ cliché as it was possible to be and still ride a bike.  Joe belonged to the ‘midlife crisis biker fraternity.’  His hair was short and neat, he wore expensive and fashionable glasses.  The friends he hung out with were all businessmen, all wealthy, and all also owned a family car.

On the day the world ended he was to meet sixty or so of his biker friends in a service station off the M25 in Surrey.  Only twenty-three turned up and all had strange stories to tell.

“The motorway is solid by junction twelve, and there’s rioting on the road.”

“This fucking lunatic with blood all round his face chased me.”

Joe could not believe his ears.  Riding a motorbike was the only wildness he could cope with in his ordered life.

The radio had advised people to stay indoors, board up their doors and windows, and avoid all unnecessary journeys.

Joe tried, without success, to use his mobile phone.  No one’s phone was working, so as a group, they took to the road to return to their families.  They found that the motorway had been totally overrun by rabid lunatics who had attacked the bikes before they even left the slip road.  All those who could, turned round to return to their meeting place.  Of those who had originally turned up for the meeting only fifteen managed to return.

Joe was shaken, and several of his friends were bloodied.  A crazed, middle-aged man had leapt out of a car and tried to pull him from his bike.  The man, who had been all wild grey hair and teeth had taken a bite out of Joe’s leather jacket, then had clung on to Joe himself as he revved the bike and shot away down the grass beside the road.  The deranged man had then leapt from the bike in order to pounce on a woman standing, looking dazed, beside the crumpled wreck of her car.

Joe had glanced back over his shoulder to see the man bite the dazed women in the neck, and her blood spray impossibly far.

Of the fifteen who had returned nine made a second attempt to find their families.  Six had remained for a variety of reasons: judging the journey too dangerous, having no families, or just not wanting to take any journey alone.

Joe’s family had been on their way back from Cornwall.  He had returned a day early from the family holiday so that he could attend his biker’s meeting.  He had no idea how far they had progressed on their journey, and he hoped they had been listening to the news and wouldn’t try to get home, as London seemed to be the centre of whatever was going on.

Joe considered going to his wife’s parents, but he didn’t think Lucy would inflict that on the children, and he didn’t think he could bear to sit out this crisis in his in-laws’ flat.

So while he considered his options he decided to stay with the remaining bikers.  There was Salman, a stocky man with very crooked teeth, who was divorced, and whose desire to be with his children was perfectly balanced with his desire to keep away from his ex wife.

Troy and Jeffrey were partners, and their only family was each other; Troy was younger, dark-haired with a short, stubbly beard; Jeffrey was thin, grey-haired, with a luxuriant grey moustache.

The sixth member of the survivors was Terry, close cropped hair was a grey stubble.  He was also divorced, and his only son, Elvis, was in a prison for young offenders.

The electronic tills had stopped working in the garage, but the cashier showed Terry how to switch on the pumps and then left, having emptied the till, to find his own family.

So the bikers filled their tanks and took some containers from the shop, which they also filled.

The bikers and a few other drivers nervously looked at the security cameras as they emptied all the food cabinets.

Thus prepared they set off to try and find somewhere the plague of madness wouldn’t reach.

“My son’s in prison,” Terry said, “it would be the perfect place to wait this thing out.”

Salman shook his head.  “Isn’t that a bit drastic?  The police and army will have this sorted in a couple of days.  We just need to find a bed and breakfast.”

Joe had his head in his hands.  “I just don’t know.  I think this is this serious: really fucking serious.”

Troy and Jeffrey sat with their arms around each other, saying nothing.

“What do you guys think?” Peter asked them.

Jeffrey stroked his moustache.  “I don’t know.  I saw those things on the motorway, I don’t know if the police can deal with them.  Or the army.  It’s some kind of infectious madness, what’s to stop the police and army getting infected themselves?”

“I suggest we get away from people: no people, no contagion.  We should find a farmhouse in the middle of nowhere and wait for the disease, or virus, or whatever it is to burn itself out.”

“That’s not only a good idea,” said Joe, “but it appeals to my sense of wanting to get the hell away from here right now.”  While he spoke he fingered the hole the crazy man had bitten in his leather jacket.

“What about the coast?” Peter suggested, sweating, his eyes wide.

“If people panic we won’t be the only ones heading for harbours; there’ll be too many people for my liking,” objected Jeffrey.

“Not only that,” Joe added, frowning,  “but it gives us one less direction to run if those nutters come charging.”

They opted to explore the countryside between Salisbury and Winchester.

“It’s not as remote as the Lake District, but it involves a lot less travelling, and I suspect the roads are going to be getting more and more dangerous as this goes on,” concluded Joe.

And so they set off, riding in single file, sticking to small roads and maintaining a steady pace, rather than racing.  They passed several car crashes, burning buildings and several times they were chased by the infected lunatics.

Troy had a radio in his helmet, and when he heard a news broadcast at five in the evening he signalled to the others to stop.  They were in a country lane, with no visible buildings or cars, and they pulled over into a small lay-by that led into a field of cows.

Troy pulled off his helmet.  As they clambered off their motorbikes to stand in a circle, he called to the others,  “Guys this is so fucking unreal you are not going to believe it!”

“What?” the others asked in almost-unison.

“Just get on with it!” snapped Terry.

“This infection.  Those crazy people.”

“No, really - on the BBC - they said.  The virus thing is causing the brains of the dead to keep working.  But all they do is want to kill other people, and if they kill you, you become one of them.”

“I don’t know what you’ve been listening to, mate,” said Terry, “but it sure as fuck ain’t Radio Four.”

“No,” said Jeffrey, “it makes sense.  Did you get a good look at those creatures on the motorway?  They were covered in blood, some of it their own.”

“It’s seriously fucked up,” said Jeffrey, “but it doesn’t change our plan: find somewhere far away from the living, and where the dead aren’t likely to be around either.”

“The only difference,” added Joe, “is that when we find somewhere we make sure it’s secure, and we don’t let anything know we’re in there.”

They re-mounted their bikes and noisily kick-started them.

Joe was at the front of the group, and as he started his engine, he looked back to see Peter, at the rear, also kicking his bike to life.  Then he noticed, with alarm, a shape moving behind Peter, running towards him across the field with unnerving agility.  It was hard to tell the runner’s gender as its body, although naked, was caked in mud and blood and was distorted by dozens of bite-marks; chunks removed from the pale body.

The Cancer Chronicles by George Johnson
Murder at the Art & Craft Fair by Steve Demaree
Darker Than Love by Kristina Lloyd
Jackson Jones and the Puddle of Thorns by Mary Quattlebaum
Masquerade by Melissa de La Cruz
Winter’s Awakening by Shelley Shepard Gray
The Henderson Equation by Warren Adler
Game of Queens by Sarah Gristwood
The Dead Man by Joel Goldman
Tea From an Empty Cup by Cadigan, Pat
Our partner