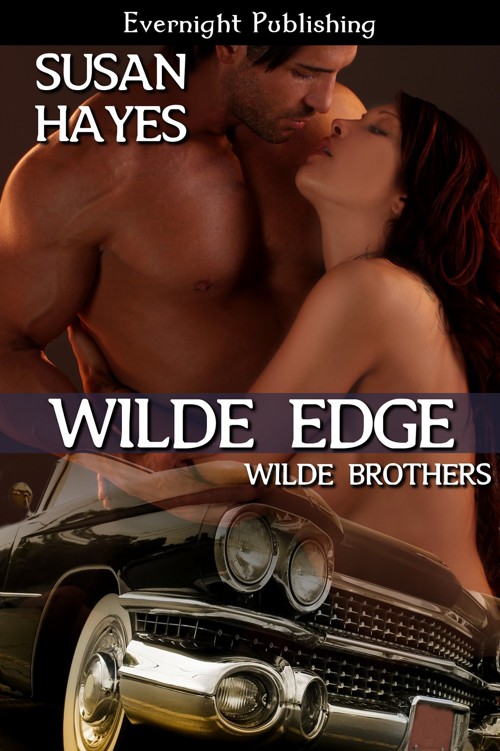 This is a work of fiction.
All names, characters, and places are fictitious. Any resemblance to actual
events, locales, organizations, or persons, living or dead, is entirely
coincidental.

This book is dedicated to
the men and woman of law enforcement, officer and civilian, and to one cop in
particular: my Dad. Thank you for your service, without you, the world would be
a far darker place.

For my
parents, for believing in me and for my best friend Karen, for putting up with
my special brand of crazy.

“
Nuh
uh.
No way. That is not happening. I came here
for a tattoo, bro, not a shave.” Tag Wilde sat up straighter, crossed his arms
across his chest and glowered at his youngest brother, Nick.

“If you want me to tattoo you then
I need a smooth area to work on. Shaving your hairy chest is not exactly on my
bucket list, so let’s get this over with and we’ll never speak of it again.
Deal?”
Nick cocked a dark brow at him, the hint of concern
in his eyes at odds to the levity in his words.

Tag hated seeing that look.
Everywhere he went these days, people were looking at him with concern or
outright pity. He was sick of it. Sick of having to tell people he was fine.
That he’d come to terms with not being a cop anymore. Nick had been one of a
handful of people that hadn’t made him feel like a charity case, so Tag knew
damned well what must have happened to change things.

Nick had the grace to look guilty.
“Yeah, she did. She’s worried about you. Says you aren’t visiting anymore. That
no one’s seen you at Leo’s in a couple of weeks. She wanted to know if I’d seen
you. I told her you’d been visiting the shop a lot, talking about getting
inked.”

“Fuck. You told our mother that I’m
getting a tattoo? Nicky, are you trying to make my life more miserable than it
already is?”

“What was I supposed to say? Do you
know how rare it is for her to call
me
?
I’m not exactly the family favorite. And don’t tell me that you haven’t been
hiding out here, because I know damned well you’re not coming over to soak up
the atmosphere,” Nick said, and then gestured around them.

The shop had black floor tiles and
white walls that were almost completely covered in artwork and pictures of
various body parts after being tattooed. A comfortable but well-worn couch took
up most of the waiting room, along with an equally worn coffee table covered in
dog-eared magazines. Behind the reception counter were several work areas, each
one carefully organized and neat as a pin. It always amused Tag to note that
his brother, whose room at home had always been in a state of perpetual chaos,
kept his shop so damned clean.

The work areas were furnished with
stools for the artists and dentist-style chairs for the clients, while the rest
of the space was dedicated to the tools of Nick’s trade, tucked in wherever
there was room.

Okay, his brother might have a
point. Tag wasn’t coming here for the ambiance, but he wasn’t hiding from their
family. Well, not completely. He knew they meant well, it was just that
whenever they weren’t trying to find him a new hobby or career, they were all
talking about his brother Ben’s upcoming wedding.

Tag was happy for Ben. Hell, he’d
helped patch things up between his brother and Kelly after their first fight,
but that didn’t mean he wanted to be around all that romantic, mushy, wedding
stuff.

And then there was their mother.
Having one of her boys married had Meg Wilde on a mission to find women for all
five of her sons. Tag wasn’t interested in getting married, or even getting
serious, but that wasn’t what Mom wanted to hear, so she wasn’t listening to
him.

“I’m coming to hang out with you
because you’re the only sane one left in the family. Everyone else is fixated
on wedding planning and finding me a new life. You’re smart enough to just
leave me the hell alone.”

Nick smirked at him. “Not fun being
the family fixer-upper project, is it?”

“No, it’s not. I’m starting to
understand why you keep to yourself so much.” Tag and Nick were the youngest
brothers, not even two years apart in age. They’d been close for most of their
lives, but then Tag had gone to the academy and Nick…well, Nick had gone his
own way. Funny that it had taken Tag getting shot and put on disability for him
to reconnect with his little brother. That might be the only good thing to come
out of the mess he’d made of his life.

“So, what did Mom say when you told
her you were going to give me a tattoo?”

“She did that little sigh of hers,
and then said she’d never forgive either of us if it had a naked woman or any
curse words. I promised her that wasn’t going to happen and that was the end of
it. And the fact she didn’t freak out tells you just how fucking worried she
must be about you.” Nick held up the razor again. “So, are we doing this or
not? If we are, you need to get that shirt off.”

“You ever tell anyone you shaved my
chest, I’ll make sure your bike never sees another sunrise,” Tag threatened as
he uncrossed his arms and dragged the dark green shirt over his head. He didn’t
like anyone seeing his scars, but Nick had already seen them. Tag had shown him
so that he could design a tattoo to distract from both the surgical scar and
the coin-shaped marked left behind by the bullet that had nearly killed him.

“Lie back and hold still. Once I
have the area prepped I’ll transfer the stencil. Then you can take a look in
the mirror and make sure you like the placement.”

“I’ve been hanging out at your shop
for a month. I know the routine.”

“And yet you missed the bit where I
need to shave your hairy hide.”

“I only really pay attention when
you’re tattooing the ladies.”

“Yeah, not creepy
at all there, bro.
And I want you to be sure about this before you give
me the go ahead. You’re the first one of my family I’ve agreed to ink. I don’t
want to hear you bitching about it over Christmas dinner for the next fifty
years.”

Tag stayed still until the stencil
was on, then he got up and checked out the design. It looked different now that
it was on his body and not on paper. It was even better than he’d hoped. “Do
it.”

“Then get your ass in the chair and
don’t move until I tell you.” Nick pointed to the chair and gave him a wicked
grin.

“That grin makes me nervous,” Tag
said as he settled his six-foot-two frame into the chair. He flicked his dark
bangs out of his eyes and tried to relax.

“It probably should. It’s crossing
my mind that now is the moment I get to take my revenge for every shitty thing
you did to me while we were growing up. Lie back and get comfy. This is going
to be a fun couple of hours…for me.”

“Cute. Just remember what I said
about your bike.” Tag knew that Nick loved his bike like it was a living,
breathing entity. He understood, because he felt the same way about ‘Tiffany’,
his 1968 model Chevy Impala. Their dad had imparted both his love of old cars
and his rebuilding know-how to the two of them, and Tiffany had been reborn in
the garage of the house he’d grown up in.

“I’m starting now,” Nick told him,
his words accompanied by the buzz of his tattoo gun. After he started, Tag let
out a breath and relaxed. Apparently once you’ve been shot and left for dead,
getting a tattoo didn’t rank that high on the pain scale.

“Wake me up when you’re done. I’m
going to take a nap,” he joked, and Nick snorted with laughter.

“Yeah, right.
There’s nobody here to impress, bro. You can cry if you need to.”

“Fuck you,” Tag muttered and closed
his eyes.

“Not to ruin the moment here, but
have you found a place to stay yet?”

The apartment Tag had been
sub-leasing for the past two years was being taken back by the owner, and he
needed to find a new place to stay, fast. “Not yet. Nothing I want is in my
price range, and nothing I can afford has a garage for Tiffany.”

“You do realize that she’s a
car
? They’re designed to be outside.”

“I
know,
smartass. But I was thinking of doing some work on her this winter, you know,
to increase her performance. I’ve been doing some racing with that car club I
joined, and I’ve learned a few things I want to try. But to do it, I need
garage space. And might I point out that your bike is always parked under cover
if you can manage it. You’d think it was made of spun glass instead of steel
and chrome the way you baby it.”

“That bike’s an investment. You could always
use Dad’s—ah, I see the problem. If you’re home, Mom’s going to be after you to
find a new career, marry a nice girl and give her some grandchildren.”

“And not necessarily in that
order,” Tag agreed. There was silence for a bit, but then Nick spoke again.

“You know, you could talk to Jo.
Money’s been tight lately and I’m sure I saw a ‘suite for rent’ flyer up in the
office the other day when I was visiting.”

Tag cracked open one eye to look at
his brother.
“Joe, your landlord?
The one who runs the
garage you share space with?”

Hotter Than Hell by Anthology
Ever After by Annie Jocoby
Halo by Alexandra Adornetto
Hands of the Ripper by Adams, Guy
Serengeti Heat by Vivi Andrews
Uncovered (Billionaire Romance) (Boston Buyer's Club) by Black, Morgan
Winter Is Not Forever by Janette Oke
One Fine Fireman by Jennifer Bernard
Museums and Women by John Updike
Daughter of the Disgraced King by Meredith Mansfield
Our partner