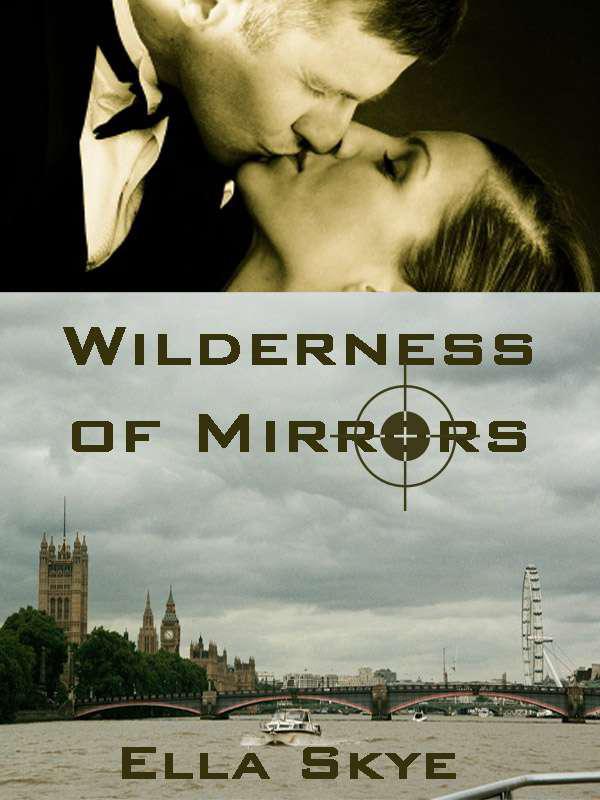 When a ghost from her past confronts interior designer, Samantha Bond, she fears he might destroy everyone she has tried so desperately to protect.

A decade after his brief encounter with the mysterious blonde, Nigel Forsythe still dreams about her. Forced back to London following a mission gone bad, the world-weary spy thinks his injuries are causing him to hallucinate. Because the blonde is back and their chemistry, explosive.

By the time they realize there’s no going back, the terrifying reasons behind their reluctance to commit have found them. As the bodies pile up, old hatreds come to light. And just when they think they’ve escaped the Wilderness of Mirrors, an unthinkable betrayal threatens to shatter their fragile relationship.

Something Wicked
: Chapter One

This book is a work of fiction. Names, characters, places and incidents are either products of the author’s imagination or used fictitiously. Any resemblance to actual events, locales, or persons, living, dead, or undead, is purely coincidental. All rights reserved. No part of this publication can be reproduced or transmitted in any form or by any means, electronic or mechanical, without permission in writing from the author or publisher.

For my husband and family - Ya tebya lyublyu

“All happy families resemble one another, each unhappy family is unhappy in its own way.”

T
he mortician’s invisible stitches barred the way to her boyfriend’s once-warm mouth. As she knelt before Marc’s coffin and sucked a ragged breath, Samantha forced herself to look away from his plasticized expression.

Had the funeral staff even looked at his picture? There were certainly enough of them, pinned like yesterday’s butterflies against linen easels.

This is my fault.
The thought hadn’t stopped echoing inside her splitting head since Uncle Loch had phoned her Hong Kong hotel room.
I’m the reason Marc’s dead.

Her knees knocked together as she made room for another to kneel beside her. The woman’s perfume, expensive but not subtle, set Sam’s teeth on edge. Marc had hated the scent of stargazer lilies and now the expensive silk pillow and padding would forever smell of them.

My fault.
She felt hot, yet frantically cold. Her stomach growled, but eating seemed unthinkable.
If only I’d done what they said.

Desperate to ground herself, Sam ran a French-tipped nail along the coffin’s edge. It was a sleek, silver affair with long bars of muted stainless steel gracing its sides. They were sturdy, those bars; his brother and cousins would have no trouble transporting 180 pounds of sinew over the church’s front steps.

Then the cold touch of polished metal brought to mind his beloved 1998 BMW and, for a sweet moment, she recollected better times.

God, they’d had fun in that car.

Silver exterior. Black interior. A wheel wrapped in leather and stitched tight against sagging –
like the inside of his lips
.

A shudder ripped through her and she clung to the kneeler’s armrest as nausea and fear coupled inside her. She couldn’t do it. Why would anyone think she could steal a priceless Chinese artifact?

She bit down on her inner lip and tried to focus on the body before her.

A costly tie had been laid stiff and flat against the starched-white of Marc’s shirt.

Nothing like the worn tee shirts he’d paired with long athletic shorts and flip-flops.

Who was this man?

And why did his chest look as though it had been replaced with a mannequin’s? Was the casket half-closed because part of him had been shredded along the rails?

She felt a hum begin at the back of her throat. Her legs were weak as eggshells.

Because the scenario was all too familiar.

Silence – solid walls of it. Everyone tiptoeing around her, red-eyed and full of pity. A casket filled with someone she loved.

She swallowed hard and wished she had gum.

Then the woman beside her stood, leaving Sam’s eyes nowhere to rest except upon Marc’s bruised skin.

Why was it dusted with powder? Hadn’t anyone heard of liquid foundation? Dazedly, she contemplated using her bottle of Chanel Teint to fix it.

Her fingers brushed his. Dead and thick. The room swam out of focus and she snatched her hand away, fingernails digging hard into the flesh of her palm.

Stop it! They don’t need you fainting - causing more grief for them. As if Marc’s death isn’t enough.

She wrapped her arms around her shaking shoulders and remembered how much warmer his had been.

Her uncles were newly gone, having expressed their condolences and returned to their respective jobs. And their loss left her feeling utterly bereft of support. Part of her knew they would have stayed had she asked. Another part howled in despair that they would have done so instinctively had she been their biological daughter.

She dropped a shaking hand to Tamar’s sleek, black-furred head. At least he was there. Forever warm and reassuring, the dog sat stoically beside her.

Then Marc’s youngest sister - face blotched red with uncontrollable crying - looked her way, and panic reared ugly and swift in the understated opulence of the funeral home. Because under all that pain, there was an undeniable stain of carefully checked anger.
They think I broke his heart. Think I cheated on him.

It was too much to bear. Sam jerked to her feet and backed away from Marc’s body, mumbling something to his numb parents before she fled into the cold arms of Manhattan’s East 87
th
Street.

The wind bit fast and sharp. And she realized rather belatedly that her coat was still draped over the back of a camel-covered chair, cashmere gloves shoved deep into one sleeve.

To hell with it.
She wasn’t about to go back. Ever.

“Taxi.” Her hand shot up, blurring the view of austere façades and leafless Lindens. The cab was pleasantly grubby and the scent of stale cigarettes almost inviting. “424 Broadway, please.” She needed pain right now. Real, honest to God, physical pain. Maybe then her head would clear. Maybe then she’d be able to figure out how to become a thief.

Tam settled in beside her, his great black head tipped so that a splash of ominous teeth decorated the grimy back window. Their driver picked up speed along Park Avenue and she wondered suddenly - terror seizing the emptiness of her stomach - exactly how fast the Acela had been going when it hit Marc.

‘
The police said he…said he jumped in front of it…
’ His mother’s whisper of disbelief slid through Sam’s tattered thoughts.

But he didn’t!
She had tried to tell them there was no bloody way he’d have killed himself over her. Over pictures which had been taken during the fashion industry’s annual Hong Kong soirée. It wasn’t as though indiscretions were unimaginable in their long distance relationship. And this had been a rather dull kiss with a male model of ambiguous sexuality.

Only no one seemed to be listening.

Sam swore softly, realizing her lighter and Marlboros were still inside her coat pocket. She drummed fingers on a wool-covered knee and bit back the urge to smash the window.

Because crazy fans do these things. It’s part of the job, which is exactly why you didn’t bother to tell Uncle Loch and John. They’d only have worried and made you come home.

More of New York, busy and unperturbed by her desolate musings, shot by.

But you didn’t believe he was crazy, did you? Not completely. Not after what happened to Mum.

The original blackmail note had fallen from a book Sam had been reading while her hair was being blown out.

Steal the tiger, or someone you love will pay the price.

The next day, a sheet of directions and a sketch of the figurine’s location had appeared inside her morning paper. The one slipped beneath her hotel room door.

Not so crazy
, her mind rejoined.
Calculated. Cruel
.

Like the note she received the day Marc was killed.

You are a smart little girl, aren’t you, Samantha?

Night was coming on. Lights flickered in the cab’s side view mirrors. Her hands shook. She hadn’t had a cigarette since breakfast. She contemplated asking the driver to pull over. There was a convenience store on the next corner… maybe after a cigarette she’d be able to concentrate. To think of what to say to Marc.

If only I could cry.

Then somehow the corner slipped by.

Another two after that.

Eventually, the reason came to her.

A small thought. A prayer of sorts even
she
could handle.

I won’t smoke again. I promise you that. Not if I have to run to stay skinny.

The idea almost made her smile. Because Marc would have been on the floor, incapacitated with laughter, at the thought of his blond Barbie trading heels for sneakers.

He’d been a swimmer. Lean and long. His hair smelled of chlorine and his eyes were forever bloodshot. He was smooth and supple. Thoroughly engulfed in the life of someone who prized the power of his lungs. More than once he’d hidden her cigarettes or thrown them out.

Quitting would mean something to him.

She felt a small measure of peace tip the scale of her mounting terror.

How the fuck was she going to become a thief?

Think of that later. Right now just take a deep breath and then another.

The taxi slid to the right, and she could just make out a charcoal exterior delineating one brick rectangle of a building from its neighboring jewelry store. The slick mirrored letters spelling out ‘
Sacred Tattoo’
were demure and sophisticated amid the cacophony of Chinatown’s neon decor.