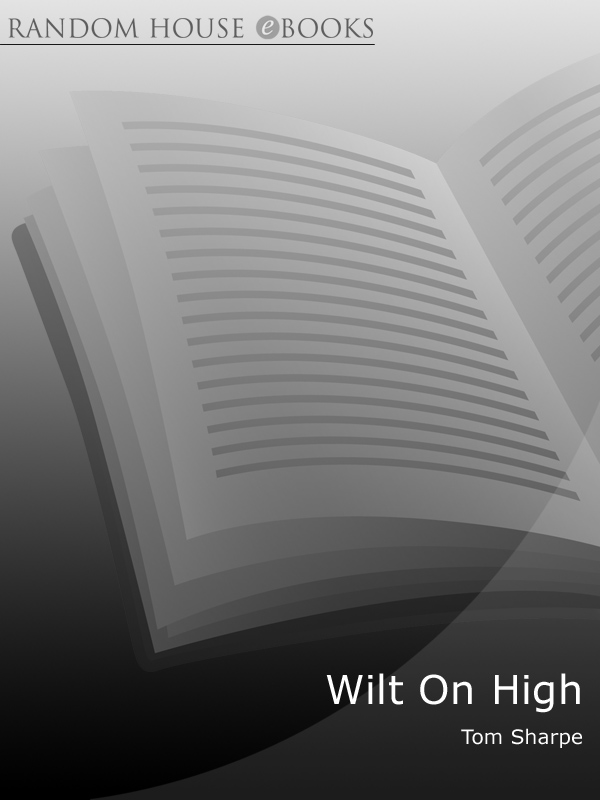 Tom Sharpe was born in 1928 and educated at Lancing College and Pembroke College, Cambridge. He did his national service in the Marines before going to South Africa in 1951, where he did social work before teaching in Natal. He had a photographic studio in Pietermaritzburg from 1957 until 1961, and from 1963 to 1972 he was a lecturer in History at the Cambridge College of Arts and Technology.

He is the author of sixteen novels, including
Porterhouse Blue
and
Blott on the Landscape
which were serialised on television, and
Wilt
which was made into a film. In 1986 he was awarded the XXIIIème Grand Prix de l’Humour Noir Xavier Forneret and in 2010 he received the inaugural BBK La Risa de Bilbao Prize. Tom Sharpe died in 2013.

‘Days of wine and roses,’ said Wilt to himself. It was an inconsequential remark but sitting on the Finance and General Purposes Committee at the Tech needed some relief and for the fifth year running Dr Mayfield had risen to his feet and announced, ‘We must put the Fenland College of Arts and Technology on the map.’

‘I should have thought it was there already,’ said Dr Board, resorting as usual to the literal to preserve his sanity. ‘In fact to the best of my knowledge it’s been there since 1895 when –’

‘You know perfectly well what I mean,’ interrupted Dr Mayfield. ‘The fact of the matter is that the College has reached the point of no return.’

‘From what?’ asked Dr Board.

Dr Mayfield turned to the Principal. ‘The point I am trying to make –’ he began, but Dr Board hadn’t finished. ‘Is apparently that we are either an aircraft halfway to its destination or a cartographical feature. Or possibly both.’

The Principal sighed and thought about early retirement. ‘Dr Board,’ he said, ‘we are here to discuss ways and means of maintaining our present course structure and staffing levels in the face of the Local Education
Authority and Central Government pressure to reduce the College to an adjunct of the Department of Unemployment.’

Dr Board raised an eyebrow. ‘Really? I thought we were here to teach. Of course, I may be mistaken but when I first entered the profession, that’s what I was led to believe. Now I learn that we’re here to maintain course structures, whatever they may be, and staffing levels. In plain English, jobs for the boys.’

‘And girls,’ said the Head of Catering, who hadn’t been listening too carefully. Dr Board eyed her critically.

‘And doubtless one or two creatures of indeterminate gender,’ he murmured. ‘Now, if Dr Mayfield –’

‘Is allowed to continue,’ interrupted the Principal, ‘we may arrive at a decision by lunchtime.’

Dr Mayfield continued. Wilt stared out of the window at the new Electronics Building and wondered for the umpteenth time what it was about committees that turned educated and relatively intelligent men and women, all of them graduates of universities, into bitter and boring and argumentative people whose sole purpose seemed to be to hear themselves speak and prove everyone else wrong. And committees had come to dominate the Tech. In the old days, he had been able to come to work and spend his mornings and afternoons trying to teach or at least to awaken some intellectual curiosity in classes of Turners and Fitters or even Plasterers and Printers, and if they hadn’t learnt much from him, he had been able to go home in the evening
with the knowledge that he had gained something from them.

Now everything was different. Even his title, Head of Liberal Studies, had been changed to that of Communication Skills and Expressive Attainment, and he spent his time on committees or drawing up memoranda and so-called consultative documents or reading similarly meaningless documents from other departments. It was the same throughout the Tech. The Head of Building, whose literacy had always been in some doubt, had been forced to justify classes in Bricklaying and Plastering in a 45-page discussion paper on ‘Modular Construction and Internal Surface Application’, a work of such monumental boredom and bad grammar, that Dr Board had suggested forwarding it to the RIBA with the recommendation that he be given a Fellowship in Architectural Semanticism – or alternatively Cementicism. There had been a similar row over the monograph submitted by the Head of Catering on ‘Dietetic Advances In Multi-Phased Institutional Provisioning’, to which Dr Mayfield had taken exception on the grounds that the emphasis on faggots and Queen’s Pudding might lead to a misunderstanding in certain quarters. Dr Cox, Head of Science, had demanded to know what a Multi-Phased Institution was, and what the hell was wrong with faggots, he’d been brought up on them. Dr Mayfield had explained he was referring to gays and the Head of Catering had confused the issue still further by denying she was a feminist. Wilt had sat through the controversy in silent wondering, as
he did now, at the curious modern assumption that you could alter acts by using words in a different way. A cook was a cook no matter that you call him a Culinary Scientist. And calling a gasfitter a Gaseous and Liquefaction Engineer didn’t alter the fact that he had taken a course in Gasfitting.

He was just considering how long it would be before they called him an Educational Scientist or even a Mental Processing Officer, when he was drawn from this reverie by a question of ‘contact hours’.

‘If I could have a breakdown of departmental timetabling on a real-time contact hour basis,’ said Dr Mayfield, ‘we could computerize those areas of overlap which under present circumstances render our staffing levels unviable on a cost-effective analysis.’

There was a silence while the Heads of Departments tried to figure this out. Dr Board snorted and the Principal rose to the bait. ‘Well, Board?’ he asked.

‘Not particularly,’ said the Head of Modern Languages, ‘but thank you for enquiring all the same.’

‘Only on the basis of past experience and linguistic guesswork,’ said Dr Board. ‘What puzzles me in the present instance is his use of the phrase “real-time contact hours”. Now according to my vocabulary …’

‘Dr Board,’ said the Principal, wishing to God he could sack the man, ‘what we want to know is quite simply the number of contact hours the members of your department do per week.’

Dr Board made a show of consulting a small notebook. ‘None,’ he said finally.

‘Are you trying to say your staff do no teaching at all? That’s a downright lie. If it isn’t …’

‘I didn’t say anything about teaching and no one asked me to. Dr Mayfield quite specifically asked for “real time” –’

‘I don’t give a damn about real-time. He means actual.’

‘So do I,’ said Dr Board, ‘and if any of my lecturers have been touching their students even for a minute, let alone an hour, I’d –’

‘Board,’ snarled the Principal, ‘you’re trying my patience too far. Answer the question.’

‘I have. Contact means touching, and a contact hour must therefore mean a touching hour. Nothing more and nothing less. Consult any dictionary you choose, and you’ll find it derives directly from the Latin,
contactus
. The infinitive is
contigere
and the past participle
contactum
, and whichever way you look at it, it still means touch. It cannot mean to teach.’

‘Dear God,’ said the Principal, through clenched teeth, but Dr Board hadn’t finished.

‘Now I don’t know what Dr Mayfield encourages in Sociology and for all I know he may go in for touch teaching, or, what I believe is called in the vernacular “group groping”, but in my department …’

‘Shut up,’ shouted the Principal, now well beyond the
end of his tether. ‘You will all submit in writing the number of teaching hours, the actual teaching hours, each member of your department does …’

As the meeting broke up, Dr Board walked down the corridor with Wilt. ‘It’s not often one can strike a blow for linguistic accuracy,’ he said, ‘but at least I’ve thrown a spanner in Mayfield’s clockwork mind. The man’s mad.’

It was a theme Wilt took up with Peter Braintree in the public bar of The Pig In A Poke half an hour later.

‘The whole system is loony,’ he said over a second pint, ‘Mayfield’s given up empire-building with degree courses and he’s on a cost-effectiveness kick now.’

‘Don’t tell me,’ said Braintree. ‘We’ve already lost half our textbook allocation this year, and Foster and Carston have been bullied into early retirement. At this rate I’ll end up teaching
King Lear
to a class of sixty with eight copies of the play to go round.’

‘
Plus ça change, plus c’est la même chose
. Mind you, that’s not entirely true. At least she’s off Suffrage for Little Children and Votes at Eleven Plus. After those two blokes from PIE came round soliciting and went away with thick ears.’

‘Paedophile Information Exchange. Used to be called child molesters. These two sods made the mistake of trying to get Eva’s support for lowering the age of consent to four. I could have told them four was an unlucky number round our way, considering what the quads get up to. By the time Eva had finished with them, they must have thought 45 Oakhurst Avenue was part of some bloody zoo, and they’d broached the topic with a tigress in cub.’

‘Didn’t serve Mr Birkenshaw right though. Samantha promptly organized the other three into CAR, otherwise known as Children Against Rape, and set up a target in the garden. Luckily the neighbours put their communal feet down before one of the little boys in the street got himself castrated. The quads were just warming up with penknives. Well, actually, they were Sabatier knives from the kitchen, and they’d got quite good with them. Emmeline could hit the damned thing’s scrotum at eighteen feet, and Penelope punctured it at ten.’

‘Mind you, it was a bit oversize. They made it out of an old football bladder and two tennis balls. But it was
the penis that got the neighbours up in arms. And Mr Birkenshaw. I didn’t know he had a foreskin like that. Come to think of it, I doubt if anyone else in the street did either. Not until Emmeline wrote his name on the damned French letter and fixed wrapping paper from the Christmas cake round the end and the wind carried it ten gardens at peak viewing time on Saturday afternoon. It ended up hanging from the cherry tree in Mrs Lorrimer’s on the corner. That way you could see
BIRKENSHAW
down all four streets quite clearly.’