Read Wind-Scarred (The Will of the Elements, Book 1) Online

Wind-Scarred (The Will of the Elements, Book 1) 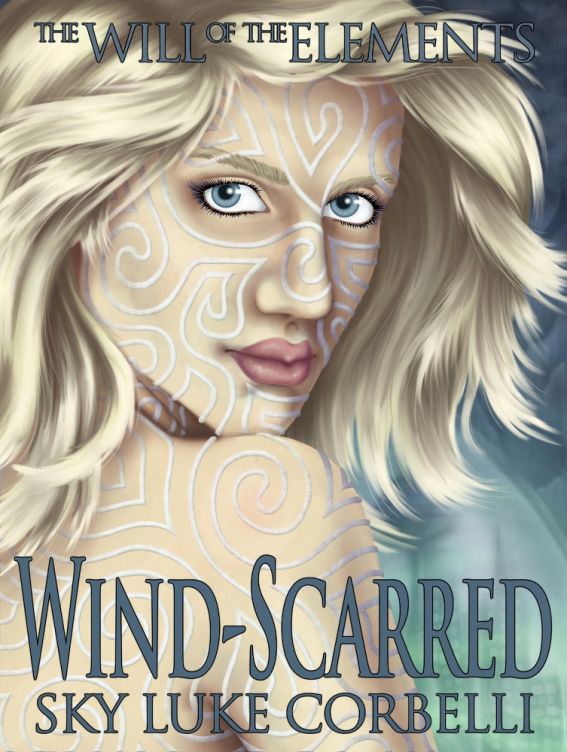 The Will of the
Elements

A Novel by Sky Luke Corbelli

Wind-Scarred (The Will of the Elements, Book
1)

This ebook is licensed for your personal
enjoyment only. This ebook may not be sold or given away without
the author's consent. Thank you for respecting the hard work that
went into the making of this story.

This is a work of fiction. The names,
characters, places, and happenings herein are the products of the
writer's imagination or have been used fictitiously and are not
construed as real. Any resemblance to persons, living or dead,
actual events, locales, or organizations is entirely coincidental.
All rights reserved. No part of this book may be used or reproduced
in any manner without written permission from the author.

To my beautiful wife, without whom this never
would have left my head.

Irritation, Interrogation, and the Truth

Visions of the Past

A Brief History of Everything

Good Times with the Guild

First Dates and Other Elusive Creatures

The Gang's All Here

At Least It's Not Raining

Demons in the Dark

Whatever the Storm Blows In

Always Look On the Bright Side

So Sharp You'll Cut Yourself

It Burns Us, Precious

Flame On the Horizon

Ear to the Ground

You Are Not Prepared

Static On the Wind

From a Clear Blue Sky

Was It Good for You Too

For a Job Well Done

The Big Man Himself

The Road Goes Ever On

The ship shuddered once. Confused, Ezra tore
his eyes away from the amazing view of Earth behind them. His
parents and the other passengers were still making small talk. The
words
Millennial Legacy
were emblazoned on nearly every
surface. No-one else seemed to have noticed the small vibration.
Maybe he had just imagined it.

He turned back to the viewport and caught a
glimpse of the space elevator cable – a massive construction made
from secret materials by the Hughes family. Normally practically
invisible against the backdrop of space, it was now sparkling with
golden energy. Fascinated, Ezra watched as electricity slithered up
toward them, riding the space elevator until it was parallel with
the ship. It gathered around the cable into a flashing orb, pulsed
once, then leaped across the dividing distance, striking straight
at the engines. Fire roared out to meet the lightning bolt, twining
with it as if to hold it in place. Brilliant red-orange flames
battled for supremacy against the wildly writhing mass of
electricity.

The ship began to shake in earnest. Alarms
went off, but it was too late. In a flash the lightning broke free
of the fire's embrace and rained a spidery web of white-hot bolts
across the ship's starboard side.

Then the world exploded.

With a bone-shaking thump, the fuel
compartment went up, ripping the hull apart. Metal shrieked in
agonized protest. Someone screamed, and it took Ezra a moment to
realize it had been him. He fought to breathe, gasping for air as
he was hurled away from the fragments of the dying shuttle, lungs
burning. Spinning freely, he saw the Earth, then space, then the
orbital station sitting serenely atop the space elevator, only a
few klicks away.
So close,
he thought, as the docking port
lazily extended toward what was left of the ship. Space rolled by
again as his oxygen-deprived body began to shut down. Ezra took one
last, longing look down at Earth, bits of wreckage still burning
out beneath him.

And something moved. From the guttering
fires of the devastated ship, an angel spread her wings and rose.
Skin like velvety smoke, hair the deep red of a burning coal,
flames sheathing her body in a flickering robe. She reached out
toward Ezra.
I wonder if everyone sees something like this when
they die,
he thought, as slender arms wrapped around his neck
and back, pulling him to her warm embrace, sheltering him beneath
wings of light and heat. Her mouth moved, but no sound came out.
Ezra smiled at her, closing his eyes, surrendering to the
inevitable.

Suddenly, her mouth was pressed to his,
breathing life into him. His lungs expanded with air and his eyes
fluttered open. He caught one last glimpse of the angel falling
away, tied to the still-burning corpse of the ship, a divine smile
on her face, arms spread as if releasing him...

Ezra Hawkins woke with a start. Outside, the
sun was just beginning to dip below the Barrier Mountains that
surrounded Sanctuary. “That's what you get for falling asleep while
watching the sunset,” he mumbled savagely to himself.

He leaned back in his chair, yawning as he
stretched his lean, five-foot eight-inch frame. He ran a hand
absently through his curly, dark brown hair. Muddy brown eyes
glanced at the console in front of him, lighting as he went over
the results of his most recent test cases. Every test passed, all
well within his margin of error.

A fierce smile spread across Ezra's face. He
uploaded his flight trajectory into the test glider, locking in the
last piece of his brilliant plan. Everything was set, and no bad
dream or remembered terror was going to spoil it for him.

Tonight, he was going to see the world.

“Department of Ordinances and Lawful
Temerity,” a bored voice chirped as the dispatcher materialized in
front of Ezra. “Border Dispatching Coordinator, how may I help
you?” Ezra cleared his throat and read from the carefully prepared
speech he had hidden amongst his research notes.

“Hello, this is Ezra Hawkins of the Hawkins
Legacy family. I will be preforming a standard glider retrieval
test – as I have numerous times over the past eight months –
tonight at approximately a quarter after five. I am calling to
notify you of this occurrence.” He paused, hiding a smile as he
anticipated the answer.

“Well, Ezra Hawkins of the Hawkins Legacy
family,” the woman responded wryly, “let me just alert the patrols
that they should be seeing something come up so we won't cause a
panic,”.

Ezra frowned. He had a feeling she was
mocking him. He opened his mouth to say something about it, but
before he could get a word in she blurted out, “Wait, tonight?
Working on Founder's Day? Don't tell me that you're going to miss
out on all the fun for an experiment!”

Ezra suppressed another smile. Now things
were back on track. He checked over his response, put on a confused
tone, and answered, “Is today Founder's Day? Oh, I must have lost
track of things. You know how it can be what with the research and
development and testing. Must have just slipped my mind. If this is
going to be a problem,” he sighed dramatically, “I suppose that I
could recalibrate the generators and set it up another day...”

He trailed off in a vaguely disappointed,
reluctant, and slightly resigned tone of voice, shoulders slumping
to create the perfect picture of a dejected scientist. He had,
after all, practiced it extensively.

“No, no, it's no problem. Just a shame that
you can't get out once in a while. I hear the Guild of Sundry is
really planning to out do themselves this year. I can't wait to see
what they've come up with!”

Ezra rolled his eyes. The Guild of Sundry –
a bunch of misfits who couldn't handle real science and instead
played huge practical jokes. Everyone was always so excited when
rumors of a new 'event' came up. But the main attraction tonight
would be something entirely new. Something world changing. Nobody,
not the Guild, DOLT, not even the Chancellor himself could trump
what Ezra had in store for Sanctuary.