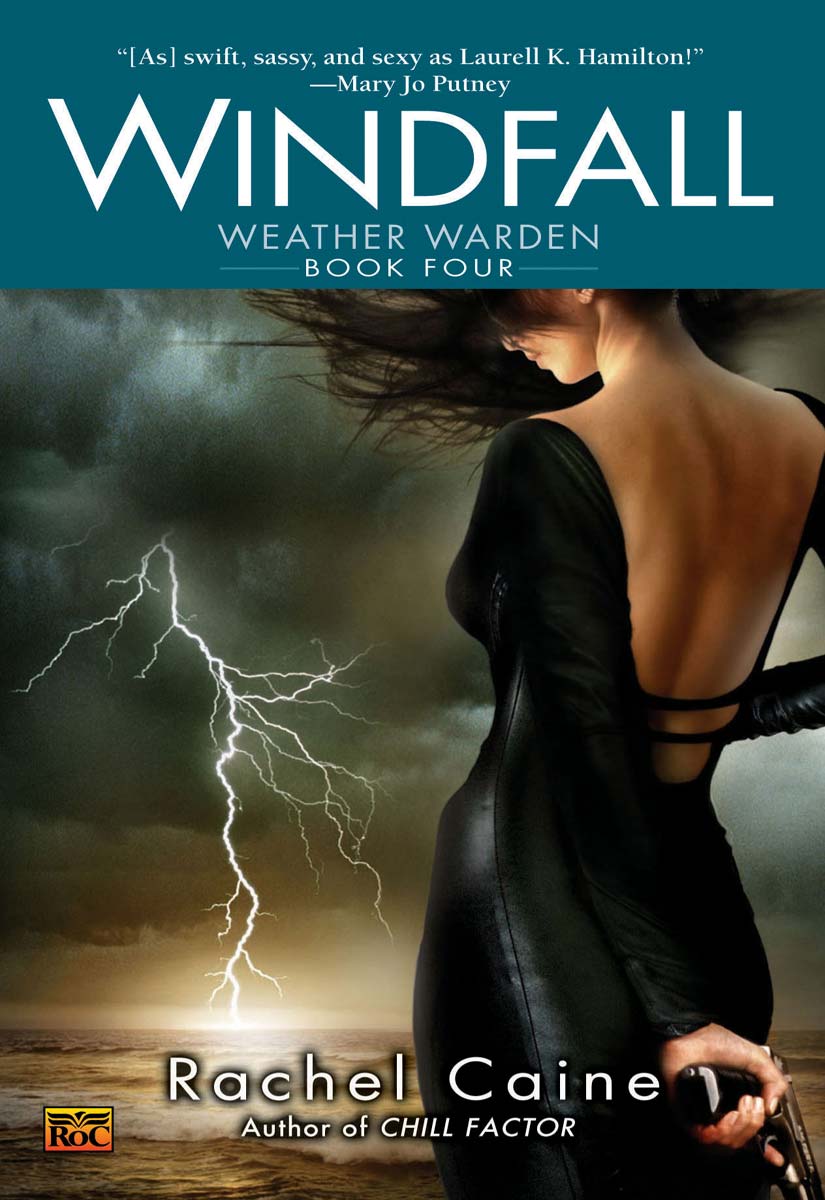 A
ROC
Book / published by arrangement with the author

ROC
and the “
ROC
” design are trademarks belonging to Penguin Putnam Inc.

The following brave writers made their National Novel Writing Month goal and wrote fifty thousand words toward a book in November 2004. I salute their incredible dedication, and I was proud to sponsor the NaNoNov community for 2004.

The author wishes to thank
The Stormchasers, who encourage me in this madness.
(Hi, guys!)

JoMadge, without whom neither this book nor ANY Weather Warden books would have been possible.

Rachel Sheer and Ter Matthies. They know why, and it has to do with werewolves.

The greatest band in the world: Joe Bonamassa, Eric Czar and Kenny Kramme!
www.jbonamassa.com
(and everyone who supports them)

America's Best Coffee in Arlington, and whatever brilliant barista invented Caramel Mochas that are served at 5:30
A
.
M
.

My name is Joanne Baldwin. I used to control the weather, but I've given that up. See, I've discovered that the Wardensâwho are supposed to be protecting all of you from horrible deaths from fires, floods, earthquakes, storms, and other fun rides cooked up by a hostile Mother Natureâhaven't been entirely on the up and up, and besides that, there's the whole question of the Djinn they use to help them in their work. I used to think it was okay to keep a magical being locked up in a bottle and subject to your will.

Not anymore, not since I fell in love with one.

Having given up my day job, I've found it necessary to put the tattered remnants of my normal life back together againÂ .Â .Â . no easy task for a girl without many marketable skills outside of the supernatural realm. Plus, there's the whole issue of having been dead, once upon a time. Kind of makes going home difficult.

And that really fast car I love so much?

Could be getting me into trouble.

Or maybe that's just my natural state of existence.

It doesn't take much to destroy the world as humans know it.

Unseasonably hot sunshine beating down on a small patch of ocean off the coast of Africa.

The water warms up a few degrees. As it burns off into gray ghosts, rising up into the air, it could be just another thing, another day, another balancing of wind and water.

But it's not. The air is just a few degrees warmer than normal, and it rises faster, carrying the moisture as a hostage. Ghosts turn to shadows as mist condenses and takes on weight. It spirals up into the sky, where the air gets thin and cold. At this height, the water condenses from mist to drops, too heavy for the process to contain them, and start a plunge back for safety of the ocean.

But the air's too warm, and as the drops fall they hit another, stronger updraft that sends them up again, dizzyingly high. Drops eat each other like cannibals and grow fatter. Heavier. Head for the ocean again.

But they aren't going anywhere; the updraft keeps short-circuiting gravity. The cycle continues, driving moisture into the air and hoarding it, as thin white virga condense and form clouds. You can feel energy building as hot sun and warm sea continue a mating dance.

It's no different than what happens every day in the Cradle of Storms.

But it is, if you know what you're looking for.

If I'd been paying attention, none of this would have happened.

I kept trying to tell myself,
You've survived worse than this,
but it didn't seem to be working. Any second now, I was going to scream and kill somebody, not necessarily in that order.Â .Â .Â .
You've been through worse.
Yep. I had. It just didn't feel like it, right at the moment.

I stared blankly at the back wall of the studio and held my place under the hot, merciless lights. The news anchors, seated at the desk about ten feet away from me, were still doing happychat.
Morning
happychat, which is a whole yak-level higher than the annoying evening forced camaraderie. I was sweating under a yellow rain slicker and matching hat and stupid-looking rain boots. I looked like the Morton's Salt girl, only not as adorable.

The weather outside was clear, and there wasn't even a hope in hell of rain from the nice, stable system out there, but Marvelous Marvin McLarty, meteorologist extraordinaire, was about to pronounce a seventy percent chance of downpours in the next twenty-four hours. And this wasn't the first out-of-the-blue (no pun intended) prediction Marvin had pulled out of hisÂ .Â .Â . Doppler. Two nights ago, he'd been the only one to accurately predict landfall of a tropical storm up the coast, while everyone else including the National Oceanic and Atmospheric AdministrationâNOAA to the weather buffsâhad put it two hundred miles to the south.

This should have made him good. It only made him even more obnoxious. Unlikely as that seemed.

Dear God in heaven, I never thought I'd miss being a Warden quite so much, but right nowâand for some time, actuallyâI wanted my old job back so bad that I'd have crawled on broken glass for it.

I held onto my big, toothy smile as the red light lit up on the camera in front of me and Marvin, who was standing next to me. He was a big man, bulky, with implanted hair and big, overwhitened teeth, laser-corrected blue eyes, and a face made unnaturally smooth by dermabrasion and Botox. Okay, the Botox was just a guess, but he was holding on to his fleeing, screaming youth with both fists.

Camera Two lit up. Marvin sauntered around, quipped with the anchors, Janie and Kurt, and then turned to the weather map. He started talking about a cold front approaching from the southeastÂ .Â .Â . only there wasn't one; there was a front stalled at the Georgia border that didn't have nearly enough zippity doo dah to make it across the state line anytime in the next, oh, year. Behind him, the Chyron graphics did all kinds of cool zooms and swoops, showing animations and time-lapsed satellite cloud movements, which meant zero to about ninety-five percent of the population tuning in.

Marvin was a certified professional meteorologist. A degreed climatologist.

Marvin knew dick about the weather, but he was damn lucky. At least so far as I could tell, and believe me, I could tell a
lot
.

He walked past the animated map, and the camera followed him and focused on me as he stopped in frame. I turned the smile on Marvin, wishing it was a really big cannon.

“Good morning, Joanne!” he boomed cheerfully. He'd snarled at me earlier, while pushing past me in the hallway on his way to makeup. “Ready to talk about what's coming up?”

“Sure, Marvin!” I bubbled right back, perky as a cheerleader on speed.
I used to have a real job. I used to protect people. Save lives. How the hell did I get here?

He wasn't listening to my internal whining. “Great! Well, we know how rough the weather's been the past few days, especially for our friends up the coast. We already know today's going to be bright and sunny, but let's tell our viewers out there in the Sunshine State what it's going to be like for them outside tomorrow!”

The camera pulled focus. I was center stage.

I held on to my smile like it was a life preserver. “Well, Marvin, I'm sure tomorrow's going to be a beautiful day for going outside and soaking up someâ”

Marvin had taken the required number of steps out of frame, and just as I said the word “soaking,” the bored, cigar-chomping stagehand standing off-camera to my left yanked a rope.

About twenty gallons of water dumped from buckets directly over my head, right on target. It hurt. The bastards had chilled it, or else it was a lot colder up in those rafters than down here on the stage; the stuff felt ice-cold as it splashed off the plastic rain hat, straight down the back of my neck, to splash down into the stupid yellow rain boots.