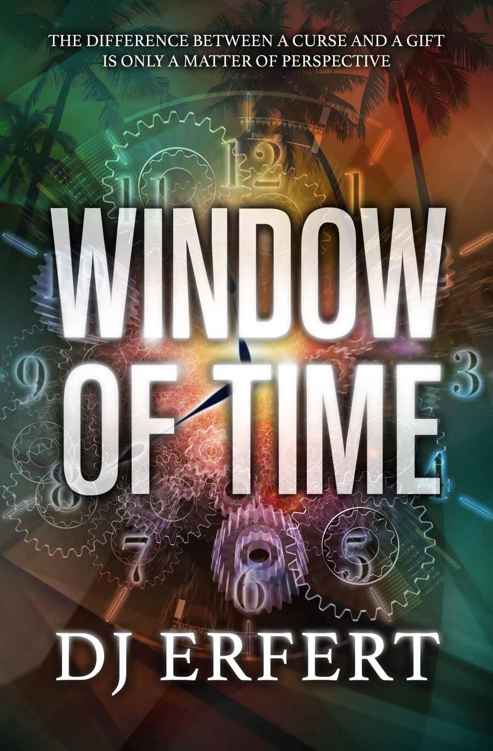 No part of this publication may be reproduced, scanned, uploaded, distributed, stored in a retrieval system or transmitted in any form or by any means, electronic or mechanical, including photocopying, recording, or otherwise, without written permission from the publisher.

This is a work of fiction. Names, descriptions, entities, and incidents included in this story are products of the author’s imagination. Any resemblance to actual persons, events, and entities is entirely coincidental.

To Mike, who still understands

The difference between a gift and a curse is only a matter of perspective.

Some secrets shouldn’t be shared.

Lucy James knew this better than most people. Her whole life had been a series of lies—not out of fundamental dishonesty or a disregard for civility, but out of self-protection. Some would say a cheater’s glimpse into the future was a gift. To Lucy it was a curse, one she had to protect through constant deception.

Lying was also one of her job requirements as a CIA courier.

Settling down in a big city like Los Angeles would give Lucy plenty of ways to stay in the shadows yet still be a part of society. Patting the handbag along her hip, she smiled, knowing at least her dream of planting roots would soon be a reality. She had just signed the papers to have utilities changed over to her name tomorrow—the same day the house she’d purchased should close.

The two-story City Hall building in which she walked held many offices, and all of them connected with some city organization. On the same floor as the water and sewer department, the fire department had its administrative offices. The doors across the hallway from them belonged to the mayor of Los Angeles and other city administrators.

For the most part, the other occupants of the busy hallway were polite and returned her eye contact, brief as it was. When Lucy began descending the long, curved staircase, she saw a handsome man already halfway up the stairs. The red Maltese cross design near the shoulder of his dark blue t-shirt suggested his firefighter career. His brown eyes captured her attention, as well as his smile, and he was looking straight at her. Lucy’s heart skipped a beat, and she quickly returned the gesture. As she descended, she worked up the courage to say hello, maybe stop and ask his name, until—

Lucy gasped as a phantom, icy wind swept across her face, leaving gooseflesh skittering down her arms in its ghostly wake. She knew the sickly cold sensation went unfelt by anyone except her. It was a precursor to a phenomenon she’d known since she was a young child—a warning that someone was about to be killed.

Her surroundings faded to the ominous dark grays, blacks, and slippery silvers she’d grown used to over the years. Just as quickly, the din of the busy lobby below disappeared, as if some unseen hand muted the sound. All motion stood still, lifeless, except for the four firefighters and one woman walking up toward her. They were draped in vivid, surrealistic color and still moving. It was as if a huge, frameless window encased them, and Lucy could peer into it to see their promised deaths.

Two of those men were in conversation with the young woman, making her laugh. Another man listened on his cell phone. The fourth firefighter still smiled up at Lucy. Movement from below drew her stare past him. A big man, dressed in a gray, three-piece suit, stepped into the window and was instantly bathed in intense color. Lucy watched him, fearing his importance to what was about to happen. He had his hand tucked inside his jacket, reaching for something as he began his climb up the winding stairs. His eyes were hidden behind mirrored Ray-Ban sunglasses, but his face pointed up in her direction.

The man’s movements were swift. With every step, his countenance changed. His mouth pulled into a hard, flat line, with the corners lifting in a perverse smile, as he moved his hand out from under his jacket. Lucy caught sight of the gun in his fist before the bodies of the five people between them blocked it from view. In deadly silence, one after another, the unsuspecting civilians received a bullet in their back, sending them face down onto the steps in front of her. When the man lifted the gun toward Lucy—the window disappeared.

Everything that was once in black and white rebounded in color. The sound returned. Time was short and precious if she wanted to change what she’d just witnessed. The five people who were heartlessly cut down in front of her were alive again—or, rather, hadn’t been killed.

The two men were again talking with the laughing woman, while the other man listened intently to his cell phone. The last man’s dark eyes were still on Lucy. His alluring smile hadn’t faltered as he continued to climb toward her. Lucy glanced from him to the foot of the staircase and saw the man-in-gray approach the bottom step.

She pivoted around and took a single step up to find another way out of the building, only to see another big man at the head of the stairs dressed identically in a gray suit and sunglasses.

“No,” Lucy cried. She couldn’t go up, and she couldn’t go down without a gunfight, a scenario that would leave bystanders dead. They weren’t the target.

Lucy needed to remove herself from the area to save their lives.

Leaning over the polished wooden railing, she noticed a different escape. Adjacent to the staircase, planted right through the lobby’s foundation, was a massive ficus tree. It had branches reaching up toward the second story, close enough for her to catch.

“It figures,” Lucy whispered. “A tree growing inside a building—only in California.”

With one hand on the top rail, Lucy did a modified cartwheel and grasped the smooth round railing close to the step. Before she could let go and get away, a strong hand grabbed her forearm.

“
No!”
Lucy cried again. She looked up into the brown eyes of the good-looking firefighter. “Please, let me
go!”
Her mind replayed her deadly “window” in a flash.

In the next instant, his eyes widened in unabashed horror. “Damn,” he choked out before his hand jerked, and she pulled from his grip.

She grabbed the closest ficus branch. A moment later, the thick green leaves gave her the cover she needed to get away. Lucy’s climb down was quick. She delayed her escape from the building only long enough to turn and look up at the man who had wanted to save her.

His stunned face stared down at her.

He wasn’t the only one leaning over the railing. Her audience included the other firefighters, as well as the two men-in-gray.

“It’s been changed,” Lucy said when no gunshots were fired. She turned and ran through the busy lobby and out the door as the angry assailants bolted after her.

An icy feeling roiled inside her chest, growing stronger with every heartbeat. Lucy knew she had only moments before the disabling side effect would overtake her. Changing the outcome of her windows came with a temporary cost to her body, and she needed a refuge—someplace to hide in safety. The private alley adjacent to the building held her immediate answer. Toppled boxes surrounded the full, industrial-sized trash bin, created a sheltering pile for Lucy to stumble behind—right before she fainted.

Johnny sat down hard on a wooden step, trying to get the insane images of the shooting out of his head. It had been so clear. He’d been pulling up the crazy woman hell bent on suicide, and then suddenly all he could see was himself and his friends getting shot from behind. It had filled his mind so completely; it was all he could see—like a dream, or like his own memory, but one that he knew he’d never experienced—and then it was gone.

“Are you all right?” Dusty asked. He bent over Johnny, grasping his shoulder, shaking him.

“Yeah, I’m okay.” As he spoke, a big man dressed in a gray suit shoved past his best friend and ran down the steps, pushing aside Johnny’s crew on the stairs. Through the railing, he could see not one, but two men dressed identically running through the lobby and out the front door. They turned in the same direction the woman had run.

He hadn’t imagined it.

Johnny shoved his hand against his chest. He felt like he had been gut punched with a sledgehammer.

“No, you’re not,” Dusty said, kneeling beside him. “Let me call a rescue unit to check you out.” He grabbed his cell phone.

“No, don’t. I’m okay.” Johnny leaned over his knees. What was wrong with him? His heart raced faster than if he’d dragged a hundred-pound hose up the stairs going double-time. He couldn’t catch his breath.

Johnny knew he was cold and sweaty, but he wasn’t about to let a squad of his fellow firefighters treat him in the middle of City Hall. He’d never live it down. “Just let me walk this off …” Johnny reached his hand down to push himself up and felt something wedged between his hip and the railing. It was a woman’s handbag with its long strap broken. He’d seen the woman wearing it before she’d tumbled over the railing.

“Okay, then.” Dusty grabbed his arm and hauled him upright. “You’re coming with me.”

Johnny couldn’t argue with a man who stood six inches taller and outweighed him by eighty muscular pounds. Keeping a good grip on the small bag, he stumbled alongside his friend up the stairs and into the administrative offices of the fire department. His crew had a meeting with the fire chief, but with the way he felt at the moment, he wasn’t going to make it there. Dusty sat him down onto the lobby’s leather sofa.

“What happened?” Christina asked, coming out from around her desk.

With that one high-pitched, helium-sounding question, every head within earshot of the unit secretary’s voice popped up from over their cubical dividers to see what was going on.

“Johnny tried to save a woman from jumping off the staircase just now.” Dusty grabbed a red medic’s bag from behind Christina’s desk. “He’s a little winded.” He grinned and set the bag down by Johnny’s feet.

“We’ll meet you in the chief’s office,” Alexander said, knocking Johnny’s shoulder as he walked by. “We’ll cover for you. You just take it easy for a few minutes.”

“Thanks,” Johnny told his crew chief.

“A woman committed suicide in our building?” Christina ran on four-inch high heels toward the lobby door.

“No,” Johnny said loudly. “She …” He clutched the handbag a little tighter. “She wasn’t trying …” He couldn’t finish telling them what he seemed to know about her escape and why she’d had to jump off the staircase the way she did. “She climbed down the tree.”

Christina turned around with her bright pink lips agape. “Are you kidding?”

Rivals in Paradise by Gwyneth Bolton
The Guardian Alpha: A Paranormal Werewolf Romance (Nameless Sentinels Book 3) by Evelyn Glass
Blessed by Cynthia Leitich Smith
The Nowhere Men by Calvin, Michael
All the Pretty Ghosts (The Never Alone Series Book 1) by Jamie Campbell
Voyage To The Bottom Of The Sea by Theodore Sturgeon
The Complete Works of Isaac Babel Reprint Edition by Isaac Babel, Nathalie Babel, Peter Constantine by Nathalie Babel, Peter Constantine Isaac Babel
A Dollhouse to Die For (A Deadly Notions Mystery) by Cate Price
Things Withered by Susie Moloney
Powerplay: Hot Down Under by Couper, Lexxie
Our partner