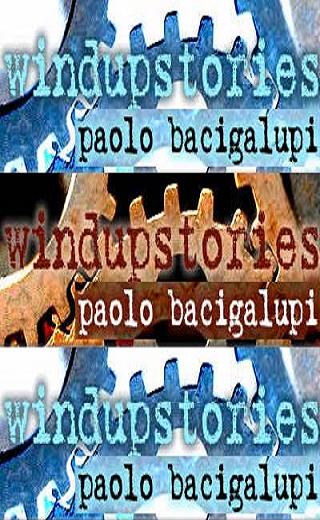 Stories from the world of

This edition of
Windup Stories
© 2009
by Night Shade Books

by Spilogale, Inc. Originally published in

by Paolo Bacigalupi. Originally published in

“No mammy, no pappy, poor little bastard. Money? You give money?” The urchin turned a cartwheel and then a somersault in the street, stirring yellow dust around his nakedness.

Lalji paused to stare at the dirty blond child who had come to a halt at his feet. The attention seemed to encourage the urchin; the boy did another somersault. He smiled up at Lalji from his squat, calculating and eager, rivulets of sweat and mud streaking his face. “Money? You give money?”

Around them, the town was nearly silent in the afternoon heat. A few dungareed farmers led mulies toward the fields. Buildings, pressed from WeatherAll chips, slumped against their fellows like drunkards, rain-stained and sun-cracked, but, as their trade name implied, still sturdy. At the far end of the narrow street, the lush sprawl of SoyPRO and HiGro began, a waving rustling growth that rolled into the blue-sky distance. It was much as all the villages Lalji had seen as he traveled upriver, just another farming enclave paying its intellectual property dues and shipping calories down to New Orleans.

Lalji put his hands in his pockets in case the beggar child had friends and turned his full attention on the boy. “And why should I give money to you?”

The boy stared up at him, stalled. His mouth opened, then closed. Finally he looped back to an earlier, more familiar part of his script, “No mammy? No pappy?” but it was a query now, lacking conviction.

Lalji made a face of disgust and aimed a kick at the boy. The child scrambled aside, falling on his back in his desperation to dodge, and this pleased Lalji briefly. At least the boy was quick. He turned and started back up the street. Behind him, the urchin’s wailing despair echoed. “Noooo maaaammy! Nooo paaaapy!” Lalji shook his head, irritated. The child might cry for money, but he failed to follow. No true beggar at all. An opportunist only—most likely the accidental creation of strangers who had visited the village and were open-fisted when it came to blond beggar children. AgriGen and Midwest Grower scientists and land factotums would be pleased to show ostentatious kindness to the villagers at the core of their empire.

Through a gap in the slumped hovels, Lalji caught another glimpse of the lush waves of SoyPRO and HiGro. The sheer sprawl of calories stimulated tingling fantasies of loading a barge and slipping it down through the locks to St. Louis or New Orleans and into the mouths of waiting megodonts. It was impossible, but the sight of those emerald fields was more than enough assurance that no child could beg with conviction here. Not surrounded by SoyPRO. Lalji shook his head again, disgusted, and squeezed down a footpath between two of the houses.

The acrid reek of WeatherAll’s excreted oils clogged the dim alley. A pair of cheshires sheltering in the unused space scattered and molted ahead of him, disappearing into bright sunlight. Just beyond, a kinetic shop leaned against its beaten neighbors, adding the scents of dung and animal sweat to the stink of WeatherAll. Lalji leaned against the shop’s plank door and shoved inside.

Shafts of sunlight pierced the sweet manure gloom with lazy gold beams. A pair of hand-painted posters scabbed to one wall, partly torn but still legible. One said: “Unstamped calories mean starving families. We check royalty receipts and IP stamps.” A farmer and his brood stared hollow-eyed from beneath the scolding words. PurCal was the sponsor. The other poster was AgriGen’s trademarked collage of kink-springs, green rows of SoyPRO under sunlight and smiling children along with the words “We Provide Energy for the World.” Lalji studied the posters sourly.

“Back already?” The owner came in from the winding room, wiping his hands on his pants and kicking straw and mud off his boots. He eyed Lalji. “My springs didn’t have enough stored. I had to feed the mulies extra, to make your joules.”

Lalji shrugged, having expected the last-minute bargaining, so much like Shriram’s that he couldn’t muster the interest to look offended. “Yes? How much?”

The man squinted up at Lalji, then ducked his head, his body defensive. “F-Five hundred.” His voice caught on the amount, as though gagging on the surprising greed scampering up his throat.

Lalji frowned and pulled his mustache. It was outrageous. The calories hadn’t even been transported. The village was awash with energy. And despite the man’s virtuous poster, it was doubtful that the calories feeding his kinetic shop were equally upstanding. Not with tempting green fields waving within meters of the shop. Shriram often said that using stamped calories was like dumping money into a methane composter.

Lalji tugged his mustache again, wondering how much to pay for the joules without calling excessive attention to himself. Rich men must have been all over the village to make the kinetic man so greedy. Calorie executives, almost certainly. It would fit. The town was close to the center. Perhaps even this village was engaged in growing the crown jewels of AgriGen’s energy monopolies. Still, not everyone who passed through would be as rich as that. “Two hundred.”

The kinetic man showed a relieved smile along with knotted yellow teeth, his guilt apparently assuaged by Lalji’s bargaining. “Four.”

“Two. I can moor on the river and let my own winders do the same work.”

The man snorted. “It would take weeks.”

Lalji shrugged. “I have time. Dump the joules back into your own springs. I’ll do the job myself.”

“You live next to more calories than some rich families in St. Louis. Two.”

The man shook his head sourly but he led Lalji into the winding room. The manure haze thickened. Big kinetic storage drums, twice as tall as a man, sat in a darkened corner, mud and manure lapping around their high-capacity precision kink-springs. Sunbeams poured between open gaps in the roof where shingles had blown away. Dung motes stirred lazily.

A half-dozen hyper-developed mulies crouched on their treadmills, their rib cages billowing slowly, their flanks streaked with salt lines of sweat residue from the labor of winding Lalji’s boat springs. They blew air through their nostrils, nervous at Lalji’s sudden scent, and gathered their squat legs under them. Muscles like boulders rippled under their bony hides as they stood. They eyed Lalji with resentful near-intelligence. One of them showed stubborn yellow teeth that matched its owner’s.

Lalji made a face of disgust. “Feed them.”

“I can see their bones. If you want my money, feed them again.”

The man scowled. “They aren’t supposed to get fat, they’re supposed to wind your damn springs.” But he dipped double handfuls of SoyPRO into their feed canisters.

The mulies shoved their heads into the buckets, slobbering and grunting with need. In its eagerness, one of them started briefly forward on its treadmill, sending energy into the winding shop’s depleted storage springs before seeming to realize that its work was not demanded and that it could eat without molestation.

“They aren’t even designed to get fat,” the kinetic man muttered.

Lalji smiled slightly as he counted through his wadded bluebills and handed over the money. The kinetic man unjacked Lalji’s kink-springs from the winding treadmills and stacked them beside the slavering mulies. Lalji lifted a spring, grunting at its heft. Its mass was no different than when he had brought it to the winding shop, but now it fairly seemed to quiver with the mulies’ stored labor.

“You want help with those?” The man didn’t move. His eyes flicked toward the mulies’ feed buckets, still calculating his chances of interrupting their meal.

Lalji took his time answering, watching as the mulies rooted for the last of their calories. “No.” He hefted the spring again, getting a better grip. “My helpboy will come for the rest.”

As he turned for the door, he heard the man dragging the feed buckets away from the mulies and their grunts as they fought for their sustenance. Once again, Lalji regretted agreeing to the trip at all.

Shriram had been the one to broach the idea. They had been sitting under the awning of Lalji’s porch in New Orleans, spitting betel nut juice into the alley gutters and watching the rain come down as they played chess. At the end of the alley, cycle rickshaws and bicycles slipped through the midmorning gray, pulses of green and red and blue as they passed the alley’s mouth draped under rain-glossed corn polymer ponchos.

The chess game was a tradition of many years, a ritual when Lalji was in town and Shriram had time away from his small kinetic company where he rewound people’s home and boat springs. Theirs was a good friendship, and a fruitful one, when Lalji had unstamped calories that needed to disappear into the mouth of a hungry megodont.

Neither of them played chess well, and so their games often devolved into a series of trades made in dizzying succession; a cascade of destruction that left a board previously well-arrayed in a tantrum wreck, with both opponents blinking surprise, trying to calculate if the mangle had been worth the combat. It was after one of these tit-for-tat cleansings that Shriram had asked Lalji if he might go upriver. Beyond the southern states.

Lalji had shaken his head and spit bloody betel juice into the overflowing gutter. “No. Nothing is profitable so far up. Too many joules to get there. Better to let the calories float to me.” He was surprised to discover that he still had his queen. He used it to take a pawn.

“And if the energy costs could be defrayed?”

Lalji laughed, waiting for Shriram to make his own move. “By who? AgriGen? The IP men? Only their boats go up and down so far.” He frowned as he realized that his queen was now vulnerable to Shriram’s remaining knight.

Let Me Whisper You My Story by Moya Simons
Deeper (The Real Fling) by Bellatas, Lyla
Claudine by Barbara Palmer
Someone Like You by Emma Hillman
The Age Of Zeus by James Lovegrove
The Corrigan legacy by Anna Jacobs
The Finder: A Novel by Colin Harrison
Chasing Shadow (Shadow Puppeteer) by Christina E. Rundle
Warriors by Jack Ludlow
The Wiz Biz by Rick Cook
Our partner