Winged: A Novella (Of Two Girls) 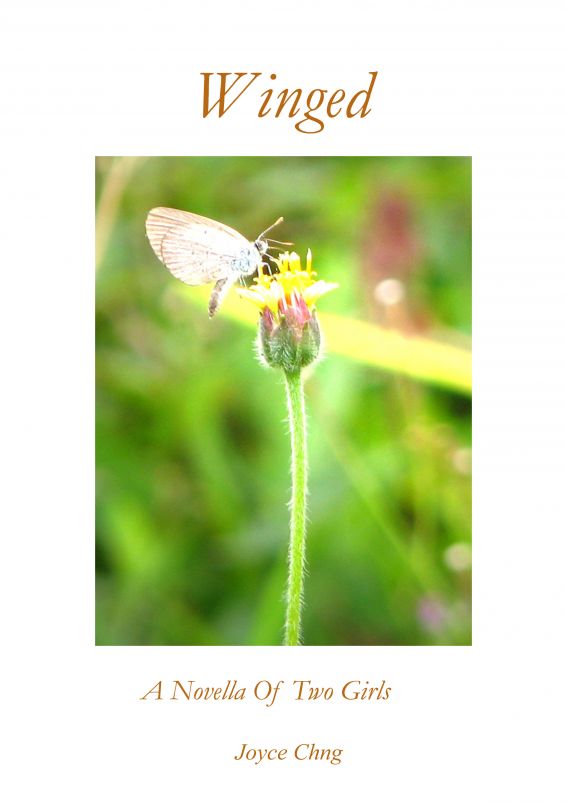 Winged: A Novella Of Two Girls

More stories by Joyce Chng are featured at
http://jolantru.dreamwidth.org

The story consists of two
novelettes:
The Basics Of Flight
and
Phoenix With A
Purpose.

The Basics of
Flight

To my little girls and to those who dare to
dream and to fly.

Balance Of The World: An Interlude

A Moment Of Gravity

A Moment Of Lift

Colleges of the Flight
Academy ( A
cadémie De Vol)

The collectors and inventors

The Garden of Crystals

Katherine found her view obstructed by a
phalanx of broad backs. Nevertheless, she managed to grab an empty
wooden crate and she clambered on top of it, seeing – finally – the
great flying contraption.

It rippled in the sun, a play of fire and
blood in its fins. It was modeled after a fish of the tropical
seas, a lion fish. It surely appeared leonine, with its erect
frills like a lion’s luxuriant mane. In the morning sunlight, it
looked courageous and daring, flashing its bright colors. It
floated in mid-air, tethered only by sturdy rope.

Everyone was whispering excitedly, pointing
at the flying lion fish. Women in their washerwoman’s clothes
thronged near it, clucking like a gaggle of geese. Her own mom was
amongst the women, a quiet figure, watching the contraption.

The lion fish’s pilot stood, conversing with
Mr Stanton, the village’s local merchant. Mr Stanton held a stack
of notes and he seemed to be explaining something important to the
gentleman pilot who wore dashing brown leathers and goggles. He
stood like an aristocrat of old, slapping his leather gloves on his
thigh.

She gazed longingly at the lion fish. They
were the craze in London, touted to be the new devices to take over
the place of the horse and the train. They were also the invention
of the collectors, a group of inventors and scientists who spoke of
Science and Logic. Next to the steely and cumbersome trains who
breathed spumes of steam and were loud, the lion fishes were
graceful, almost angelic.

The pilot saluted smartly to Mr Stanton,
bowed to the gawkers and strode confidently to the lion fish. Now,
she could see the pilot: handsome, his skin tanned brown by the sun
and moustaches neatly and fastidiously trimmed. He looked about two
years older than her. He wasn’t that old as she had previously
thought.

He disappeared into the flying lion fish.
For a moment, nobody dared to speak, all eyes intent on the
contraption. Someone loosened the rope and the pilot appeared from
an window, quickly pulling the rest of the rope back in. The lion
fish was no longer floating but moving with purpose. Everyone
gasped and ducked as one when it shot over their heads and lifted
into the air.

She tilted her head up, shielding her eyes.
The lion fish – leo-fin – shimmered in the Dorset sun. It was
glorious. It was magnificent.

She wanted it so much to be hers.

The academy’s main building reminded her of
a cathedral, with soaring steeples and grave-looking stonework,
befitting more perhaps a monastery or a convent. Yet, as she walked
towards the large brass door leading to the auditorium, she could
hear merry laughter coming from the courtyard. It lifted the somber
mood and she felt less intimidated.

It was an exceedingly large area. A
crisscross pattern of roads and paths led to the main building that
served as the center of the academy. Directly facing the cathedral
was a splendid-looking manor, constructed in the form of a H, with
the extreme wings serving as dormitories for the academy students.
Between the two wings were the classrooms and lecture chambers as
well as a dining hall.

What drew her attention immediately was the
Flying Field, a magnificent sprawling field probably the size of
Dorset. There were two leo-fins flying in the middle of it while a
group of students watched. A tiny figure – the pilot? – threw down
rope from one of the leo-fins and as she watched in amazement, the
students began to climb up the rope one by one. The figure/pilot
shouted encouragement.

The activity on the Field sent a thrill of
excitement through her. To be able to fly! She would do
anything!

She pushed the brass door and it opened with
a low stygian groan. Eyes stared at her: a thousand pairs of them,
as she walked in, feeling – suddenly - immensely small. The
auditorium seats were arranged in terraces. Row after row of seats
and students wearing their college designations. She swayed, dizzy
with the sensory overload.
The noise. The colors. The
people.

To make it worse, the lecturer standing in
the middle of the auditorium was watching her like a hawk. The
lecturer was a tall handsome-looking woman, with a strong jaw and
shoulder-length russet hair. Her skin was tanned, bearing testimony
to the hours spent in the open and under the sun. She was dressed
in a simple white shirt with long sleeves, covered with a manly
black vest, and khaki riding breeches. Black boots shone with
dedicated polishing and she held a riding crop in her right hand.,
tapping it impatiently.

It was an astonishing sight.

Clear-blue eyes bore into her critically and
she ground to a halt, realizing that she could hear muffled giggles
and whispers coming from the students.

“Name and College? You are terribly late,
young miss.” The woman said, her voice husky but firm.

“Katherine Riley. College Sable.” She
replied, almost biting her tongue. She knew that the woman was
looking at her injured ankle and her slight limp. The injury was an
unfortunate reminder of her past; it had not healed properly,
forcing her to limp. Icy anxiety spiked uneasily in her
stomach.

“Good! I am the Tutor-in-charge of College
Sable. Please find a seat, Miss Riley.” The woman’s voice held a
hint of amusement and tapped the rostrum sharply with her riding
crop. “The rest of you, make haste back to your task. The chapter
on bird flight, please.”

She walked up the aisle, desperately looking
for an empty seat. Most of the seats were occupied and jealously
guarded. She was about to give up hope when she saw one beside a
pale looking girl, about her age. Embarrassed and muttering a
rushed
Iamsorry
, she eased herself in, knowing that she was
distracting others from their studies.

The girl beside her appeared fragile, her
face framed with fine flaxen-colored hair and her skin the shade of
delicate porcelain. Her fingers were slender, caressing the open
book in front of her. She noted that there were tiny notches on the
page and wondered why. The girl’s eyes were a startling green and
they stared straight ahead.

“Don’t be embarrassed. Tardiness is a
problem, even though Pilotmaster Lee doesn’t really like it.” The
girl whispered softly.

“I am Alethia Forrester,” the girl
continued, still staring ahead. “I am College Sable too.” She
noticed the red band around the girl’s slim left arm.

“You are a muddle of red and orange, aren’t
you?” The girl finally faced her and she realized, with shock, that
she was
blind
.

“I am not!” She hissed back, stung and
offended, and some students glared at them.
The nerve!

“I think in colors,” Alethia said mildly. “I
am blind. But I perceive and feel things in different hues.”

“People assume I can see.” The girl smiled
and it was a warm genuine smile. “Come, I do not want Captain Sagan
to hound us later.” She inclined her head towards the direction of
the tall woman at the rostrum.

She opened her book but she kept glancing at
Alethia’s fingers stroking the notches. It was rather fascinating.
By now, Captain Sagan had begun the lecture. She noticed that there
was another woman, dressed in a more lady-like black gown, seated
before a strange metallic contraption. She looked as if she was
playing pianoforte. The contraption made clacking sounds. As
Captain Sagan spoke in her strong voice, the woman moved her hands
quickly over the odd object, click-clacking away.

“That’s the vox-recorder,” Alethia explained
as if she somehow sensed her curiosity. “Captain Sagan makes sure
her words are written down for laggards to peruse in the future.”
There was gentle humor in her words and she found herself
smiling.