Wings of Shadow (The Underground Trilogy) 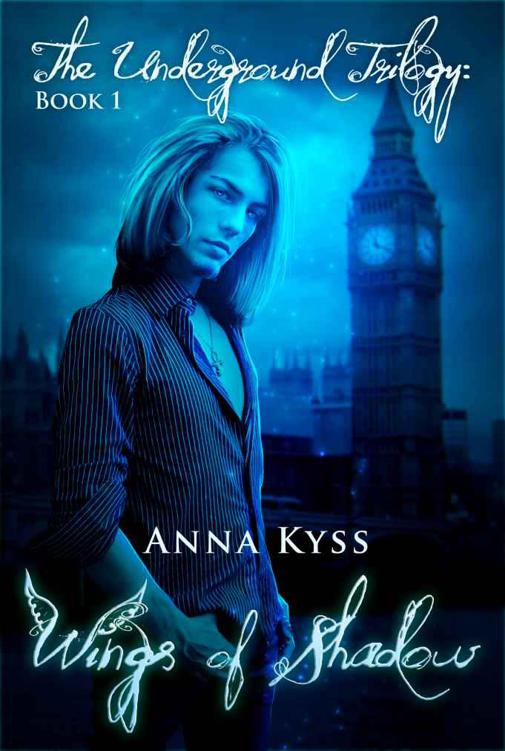 With thanks to the following sources:

Darwin, Charles (1859)
, On the Origin of Species by Means of Natural Selection, or the Preservation of Favoured Races in the Struggle for Life.

On the Origin of Species

Out of the Frying Pan

Flight of the Peacock

I Don’t Believe in Faeries!

The Gift of Survival

Not the Typical Rite of Passage

The Ankh of Immortality

“Killian, please. Do not do this. The twins must
not
be separated, especially at such a young age,” Selena pleaded.

“Silence, Mother! The treaty is signed. My first-born is destined to rule in my place. He requires proper training.”

The noise of the crowd rose, and Selena looked across the meadow to see the villagers gathering around a table. Her grandsons were seated in front of a tiered cake, eyeing the sugared violets that dotted the rosy frosting. Their tiny heads leaned forward, brown curls and blond locks blending. As the crowd began to count, both brothers took a deep breath.

“Three!” the villagers yelled, and the boys blew, cheeks puffing with their exertions. The three tiny flames glowing atop hand-dipped candles flickered out. The boys clapped in delight and reached toward the cake.

Selena chuckled to see the twins poke their tiny fingers into the uncut cake to pull away the sugared flowers. Seemingly content with nibbling the sweet violets, the boys rushed away to play. Their hand-carved wooden plates lay abandoned.

Her smile disappeared as her son stepped forward from the edge of the meadow.

Killian’s ebony cape flapped in the wind. “It is time.”

His wife, Alannah, smoothed her long gown and nodded her assent. “I expect you to honor the treaty terms.” She gazed at the two boys frolicking in the meadow.

He laughed. “So little trust!”

Selena stood to the side, stoically listening to their conversation. She pursed her lips together, holding in her protests. They had all been spoken before, countless times, and to no avail.

The two boys danced in the meadow, spinning until they fell down giggling. Imprinting this last memory of the twins in her mind, Selena ignored the tear sliding down her cheek.

Killian marched over and took her dear Kiernan firmly by the hand. Her feisty grandson resisted, but his father yanked his arm until they walked side-by-side. Selena watched as they turned away from the village and headed toward a path leading into the city. The abandoned twin threw himself down to the grass, crying and calling for his brother.

Before father and son passed the village boundary, Selena rushed over to them, stopping her golden-haired grandson. He leapt into her arms for an enormous hug, his fingers, still sticky with frosting, clutching her neck.

Meghan bounced down the scratched wooden steps of the hostel. Her thoughts were on all the possibilities that tonight held. When she saw Kiernan waiting at the bottom, she forced herself to slow her pace. She didn’t want to seem too eager, even if she felt that inner anticipation brimming. Though he appeared calm, his eyes twinkled with excitement.

“I planned something special for tonight,” he said, taking her hand and leading her out of the hostel.

Focusing on the tingle radiating between their two hands, she barely noticed as he wove her through the crowded London sidewalks. She tried to quell the excitement that arose every time she was near him. They soon reached the river. The journey had taken place in complete silence, but he seemed just as content as she was. Did he notice the tingling, too? Kiernan guided her further down the street as a gentle drizzle began to fall. They reached the stairs leading down into The Underground, hurrying to avoid the rain.

“The Underground? Are we riding the subway somewhere?” Meghan asked.

The crowd grew thicker as they descended into the tunnel. She clutched Kiernan’s hand when she was jostled by people making their way toward the trains. She would have felt lost on her own. She could barely pay attention to what they passed due to the speed of the crowd. Closing her eyes, she found herself propelled forward. Meghan was unsure if her momentum was due to Kiernan’s strong pull as he continued to hold her hand or the push of the people pulsing around her. Finally, they arrived at the station.

“Is it going to be this crowded on the train?” she sighed, tucking back wisps of her hair.

Kiernan smiled and squeezed her hand. “It will seem like we have these tracks all to ourselves.”

As the train roared into the station, the crowd pressed forward, eager to rush aboard. He held her back until the doors closed and the train shot off into the unlit tunnel.

“Are we waiting for another train?” Meghan asked.

Not responding, Kiernan walked over the visual warning painted on the concrete to “Mind the Gap” and jumped down into the recess where the tracks ran. He turned and reached for her. If Meghan’s heart had been thumping before, it had begun doing somersaults inside her chest, possibly even Olympic-qualifying somersaults.

“Coming?” The corners of his mouth creased upward as his eyes bore into her.

Meghan couldn’t deny Kiernan when he looked at her like that. His smile did something to her insides, as if she had taken an instant calming serum. Luckily, the rational side of her kicked into gear. How could she follow him, no matter how much she wanted to do so? Jumping into the area where the train passed was dangerous. Rules were invented for reasons, after all, and she didn’t want to be electrocuted or run over by the next train. Who knew what else could happen? Just thinking about all of the grim possibilities made her breathing quicken. No, jumping into that gap would be just plain foolish.

As she gathered the courage to step back and say goodnight to Kiernan, he smiled at her again. She gazed into his sky-blue eyes and jumped down into the recess as well. His warm hands grabbed her around the waist and eased her safely next to him.

“Be careful of the rails,” he warned.

After she crept over the metal tracks, Kiernan boosted her up to the opposite side of the recess. The empty station looked abandoned from across that long, wide gap. As Meghan stared at the desolate metal benches that had become unreachable, she wondered how she had strayed so far away. Why had her caution and hesitation disappeared? She had easily stood up to the temptations presented in high school—never taking a drink or trying a cigarette. But the smile of a pretty boy was enough to make her follow? Closing her eyes, Meghan squeezed her fists, nails digging into her skin.

Appearing oblivious to her distress, Kiernan pulled himself up after her, and gracefully balanced on the narrow ledge of concrete. He led her along the edge, toward the same tunnel the Tube had just passed through.

Meghan pulled back. “Kiernan, stop! This isn’t my thing. When you asked me out, I thought we might go out to eat or hit a club. Hopping subway tracks and heading into dark tunnels is
not
my idea of a fun evening.” She was determined to set some firm boundaries with the handsome boy.

Kiernan continued to walk, tugging gently on her arm. “I’m taking you sightseeing to a part of London few ever have the chance to see. There’s even a hidden club.”

When she hesitated, Kiernan leaned close and murmured, “Trust me.” His blue eyes held her gaze for a long moment. And then, he held out his hand.

She was confused. She had been determined to leave, but now could think only of spending the evening with him. Setting aside her misgivings, Meghan took his hand and followed him into the tunnel. The light dimmed as they traveled further from the station. She squeezed Kiernan’s hand, trying to balance on the narrow ledge that lined the recess of the tunnel. The curve of the wall further reduced the space to walk, and she huddled against the graffiti-covered concrete, taking careful steps. As she stepped onto something squishy, her foot slipped off the ledge.

She glared at him. “Look, I’m not enjoying myself. The nightclub better be amazing because right now, this is the worst date ever.”

Meghan wiped a slick layer of sweat off her forehead. “Adventure? Interacting with whatever lives down in that black pit is your idea of an adventure?”

“Ah… you don’t care for the resident rats.”

As she quieted her inner squeal, Kiernan pulled her to the left. Meghan stumbled into a smaller tunnel offshoot. Regaining her balance, she looked around. This narrow corridor didn’t have tracks for the Tube or any gaping recess.

Kiernan leaned close and pretended to nibble on her shoulder. “So, you don’t like the little rats. What about the big, bad rat leader?”

Laughing, she pushed him away. Staying mad at Kiernan was so hard. His charm was irresistible at times.

“So, I still have the power to make you smile, even on the worst date ever?”

Meghan shrugged. “It’s much easier to relax when I’m not worrying about being flattened by a train. Anyway, what is this? A maintenance tunnel?” She noticed a light glowing in the distance.

Before I Sleep by Rachel Lee
The Best Day of My Life by Deborah Ellis
A Perfect Spy by John le Carre
Shards: A Novel by Ismet Prcic
The Conclusion by R.L. Stine
WIth a Twist: (The Club #9) by Stratton, M., The Club Book Series
Violette Dubrinsky by Under a Crescent Moon
In the Drink by Allyson K Abbott
Songs from the Violet Cafe by Fiona Kidman
Indoor Gardening by Will Cook
Our partner