Read Winning It All Online 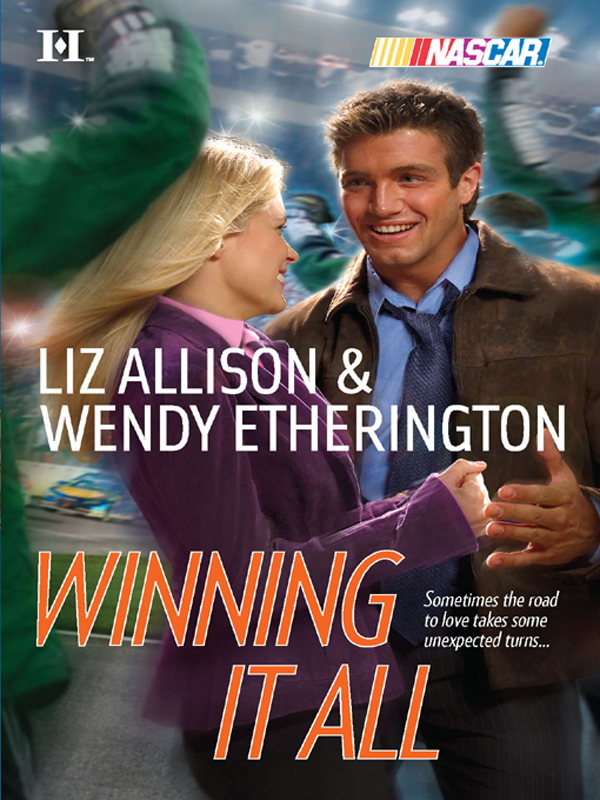 “There is action, drama, romance and a touch of suspense, and the characters are charming, realistic and very engaging…. I recommend
Risking Her Heart
to everyone.”

“Only a dire emergency can keep me away from the television between February and November when the men of NASCAR take to the track. These ladies know the sport so well that you can visualize everything they write about the men and women of NASCAR. Whether you’re a race fan or not, these ladies give you a great read.”

“Risking Her Heart
will keep readers riveted to the pages, as the plot moves smoothly from track to track…. There is plenty of humor and strong emotion to hold the groove and take the tight turns with ease. I can’t wait to see what this talented duo has planned for big brother Bryan.”

“No Holding Back
is a wonderful introduction to the racing world and an even better romantic read.”

“The writing team of Liz Allison and Wendy Etherington has produced an excellent novel in
No Holding Back.
Between the roar of engines and the cheering crowd, two people discover that nothing should stand in the way when love is the prize.”

The Girl’s Guide to NASCAR

The Women Behind the Sunday Drivers

It’s hard to believe our journey with the Garrison family is coming to a close. As we wind up everything with Bryan, we look forward to sharing his story with you, even though we’re sad to see the trilogy end.

If you’ve been following us all along, you know Bryan has issues (and if you haven’t, don’t worry—you’ll catch on quickly). He’s been through a career-ending injury and a contentious divorce, and watched his parents’ marriage fall apart while he was struggling to keep the family racing business the best in NASCAR.

After much nagging and encouraging by his family, he’s finally agreed to seek help for his continued pain resulting from his accident. But physical therapist—and push-up challenger—Darcy Butler isn’t exactly what he’s expecting. Lovely and tiny, she doesn’t seem strong enough to handle the volatile Bryan, but he finds out quickly just how wrong perceptions can be.

As a widow, Darcy has experienced her share of love and loss. She blocks her emotional pain with work and looks forward to the challenge of getting Bryan back in shape. But when she still has so much healing to do herself, can she really help a man who no longer believes in the power of love?

Thanks to all the readers who have hung in there with us throughout all the books! It’s been a joy to share our fictional, behind-the-scenes peek into the exhilarating, high-speed world of NASCAR.

To Lesa France Kennedy, whose love, dedication and
passion for NASCAR racing exemplify the heartbeat
of this trilogy.

WINNING IT ALL
CONTENTS

Seated in front of Dr. Neil Epstein’s desk, Bryan Garrison drummed his fingers on the wooden arm of his chair. “How bad?”

“While the damage to your knee is significant, with a great deal of physical therapy, I think there’s a good chance you’ll have nearly complete mobility. It’s your head injury that concerns me most.”

Bryan resisted the urge to raise his hand to the bandage covering his forehead. Like the cast on his leg, there were moments when it was difficult to believe the flaw was actually there.

“Eventually, you should go on to lead a normal life,” the doctor continued, his hands folded calmly on his desk. He met Bryan’s gaze directly.

“I don’t have a normal life,” Bryan said.

“I’m aware of that, of course.” Epstein sighed. Regret filled his eyes. “The neurological trauma is too severe. Your racing career is over.”

Even as the verdict echoed through the room, the grandfather clock in the corner ticking as loudly as a bomb, Bryan shook his head. “No.”

“I know this news is difficult for you to hear, but your head injury is severe enough that any further exposure to your job could kill you.”

Annoyed, Bryan waved that aside. There were always risks.

Epstein narrowed his eyes and leaned forward. “Even a minor incident on the track might be too much.”

“A mild concussion, a hit that would barely cause another driver to feel dizzy…It’s not fair or right, but those are the facts.”

“No.”
Bryan lurched to his feet, glaring at the doctor, intimidating him as he had hundreds of competitors over the years. “What about therapy? Exercises? Another operation?”

Epstein rose, then walked around his desk, leaning back against the mahogany surface.

His calmness only increased Bryan’s rage. How could he so quickly and easily tell Bryan his life was over? This couldn’t be happening. Not to
him
.

“Certainly therapy will improve your memory and motor functions,” the doctor said. “But no operation currently practiced will change your condition. I can’t give you medical clearance to race.”

Bryan clenched his fist. “Then I’ll find a doctor who will.”

Blood rushed to Bryan’s head. He actually swayed on his feet.

Bryan jerked his arm away, but he sat, because he knew he’d pass out if he didn’t. Though one more humiliation would hardly affect him after all the ones he’d endured over the last few weeks.

“It’s a miracle you’re alive,” Epstein continued. “Anyone else involved in that highway pileup, anyone without your reflexes and instincts, would have died and taken several people with him. If only—”

“If only the old couple hadn’t hit me at the end of the crash. I know. I read the police report.” A thousand times.

“I wish my diagnosis could be different. You’re a racing champion. Nothing can ever diminish that accomplishment.”

Pushed beyond the limits of his pride and fighting to deny the truth, however gently and definitively it was delivered, Bryan leaned his forearms on his thighs and hung his head. “My family’s
counting on me. We race. We don’t have anything else.”

“You have each other.” The doctor paused, then added quietly, “I understand you have a younger brother.”

Bryan laughed harshly, tunneling his hand through his hair. “Cade’s not ready to take over my ride.”

Bryan had tested the car over the season break, but he could get anyone to test and give the engineers the data they needed for the all-important opening race next month. Cade was too busy having fun. He should be allowed to have fun, not be buried under responsibility.

Thank God I lied to Nicole and told her to go to lunch with her friends.

He’d convinced his wife this appointment with the doctor was a routine one. She’d suffered as much as he, becoming his nursemaid, helping him walk to the bathroom and dress himself, driving him to his appointments. Because he could do none of those things on his own. He was a disgusting, pathetic shell of the man he’d been. He didn’t know how she could stand to look at him.

He couldn’t even look at himself.

If he wasn’t a race car driver, what was he?