Read Winning the Game of Thrones: The Host of Characters and their Agendas Online

Winning the Game of Thrones: The Host of Characters and their Agendas 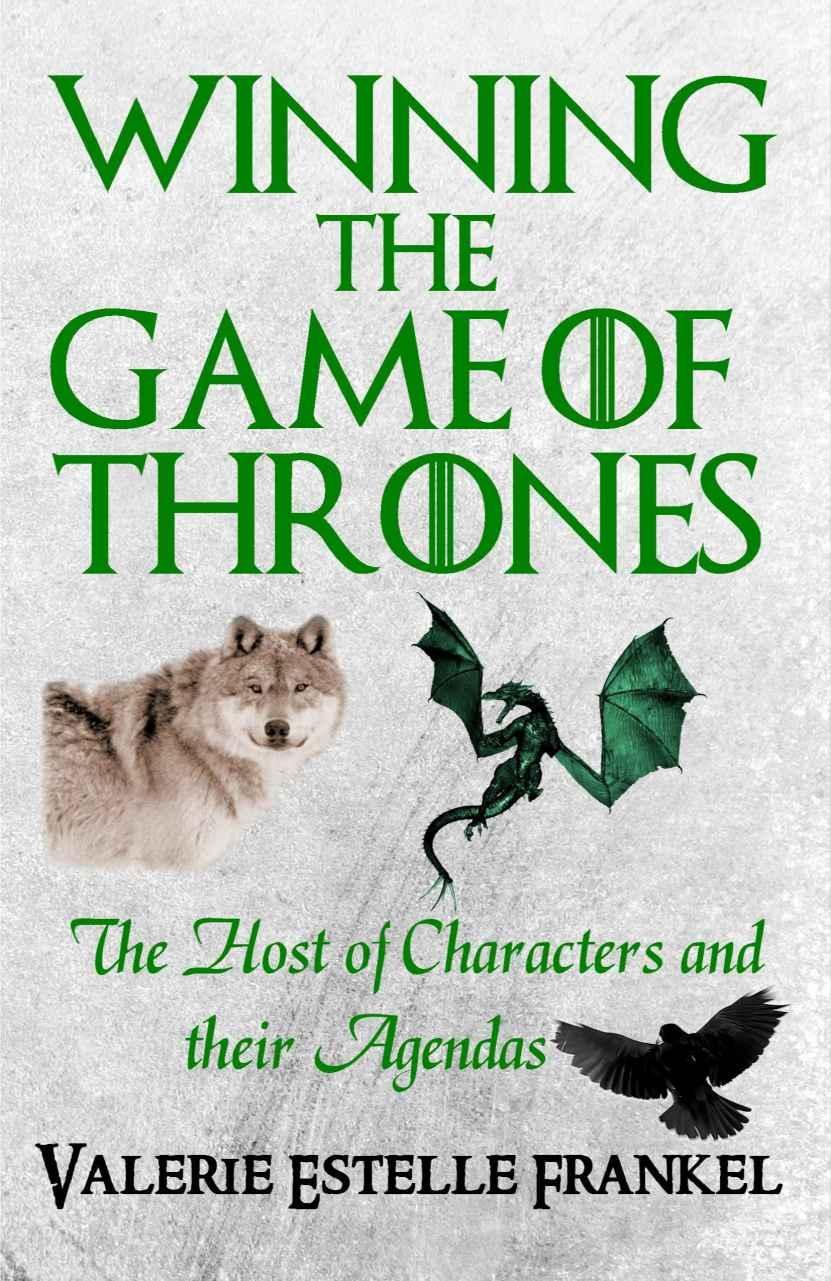 The Host of Characters and their Agendas

Other Works by Valerie Estelle Frankel

Buffy and the Heroine’s Journey

From Girl to Goddess: The Heroine’s Journey in Myth and Legend

Katniss the Cattail: An Unauthorized Guide to Names and Symbols in The Hunger Games

The Many Faces of Katniss Everdeen: Exploring the Heroine of The Hunger Games

An Unexpected Parody: The Unauthorized Spoof of The Hobbit Movie

Myths and Motifs in The Mortal Instruments

Winter is Coming: Symbols, Portents, and Hidden Meanings in A Game of Thrones

Winning the Game of Thrones
is an unauthorized guide and commentary on
A Game of Thrones
and its related book series. None of the individuals or companies associated with this book or television series or any merchandise based on this series has in any way sponsored, approved, endorsed, or authorized this book.

Winning the Game of Thrones

THE CHRONICLE OF THE TARGARYENS

The Loss of Valyria

Rhaegar and the Trident

YOU WIN OR YOU DIE: AGENDAS ON GAME OF THRONES

What Is the Night Watch’s True Mission?

Why Did Benjen Join the Watch?

Why Is Brienne so Loyal to Renly?

What Does Craster Do with the Sons?

Who or What is Jaqen H’ghar?

Why Didn’t Arya Kill Someone Important?

Why Was the Freys’ Bridge so Essential?

What Does Melisandre Want?

What Happened to Winterfell?

Why is Tywin so Useless?

Where Did Daenerys’s Eggs Come From?

Illyrio Mopatis and Varys the Spider

What Are the Major Book and Show Differences?

How Aged-up Are the Stark Children?

How Feminist is Game of Thrones, Really?

Rome and the Ancient World

The War of the Roses

The Lord of the Rings

THE GREAT HOUSES OF WESTEROS

North of the Wall

Places of the World

A SONG OF ICE AND FIRE BIBLIOGRAPHY

A Song of Ice and Fire Novels

A Song of Ice and Fire Short Stories

Other A Song of Ice and Fire Short Stories

Other A Song of Ice and Fire Adaptations

A Game of Thrones
is delighting a new group of fans, even as book lovers have been enjoying the series for decades. But its biggest downside onscreen is the enormous host of characters (far more enormous in the books – the fan-created wiki has over 5,000 pages). Too many times at parties I hear people wondering, “Who was that guy, you know, the one who works for Tyrion?” Or “Which one is he again?” The lengthy history of the Targaryens has been lost to television watchers, and with it the roots of the battle between fire and ice, as Old Nan’s tales wake once more.

At parties, the fans demand to know how Robb could marry so foolishly, or wonder who destroyed Winterfell. Did Illyrio know what he was doing when he gave Daenerys exactly three dragon eggs? What are the Faceless Men plotting? Characters’ motivations are messy, or sometimes hidden, from schemers like Varys or Tywin to pawns like Sansa and Ros.

And of course, there are the great mysteries of the series: Who is Jon’s mother? What do the Others want? Who will Daenerys marry and what is the Targaryens’ real gift? How will it all end?

This book is intended to help, exploring motivations and answering the fans’ burning questions through deep character analysis, symbolism, and prophecy. Jon and Bran’s classic hero journeys and Daenerys’s heroine journey indicate where the characters are heading. A guide to people and places has been provided as well. All of the above focuses on events of the show, keeping free of dreaded “spoilers” and characters cut for time while nonetheless providing deeper insights from the books. Interviews with producers, actors, and Martin himself likewise aid in understanding the greater story.

Martin’s characters are heavily based in British history, but with many nods to Rome, as well as myths from the Celts, Norse, and Greeks, and even the Bible. King Arthur and Robin Hood have their moments in Martin’s saga, though no series more so than
The Lord of the Rings.
For fans reading the books, there are many more references, covering everything from
Conan the Barbarian
to
The Princess Bride.
Also,
Monty Python, Blackadder,
and
The Three Stooges
make appearances as Martin tests who’s truly paying attention.

George Raymond Richard Martin has been called “the American Tolkien,” and he’s consistently on the
New York Times
Bestseller list, with millions sold. Along with
A Song of Ice and Fire
(the book series –
A Game of Thrones
is the title of book one) he edits the
Wild Card
anthologies and has written many science fiction, horror, and other short stories, many of which briefly appear in
Ice and Fire
.

Readers today eagerly anticipate the last two
Ice and Fire
books along with more short stories set in Westeros…the next of which is due to arrive December 2013. Between the books and show, this series is set to continue far into the future.

CHAPTER 1: THE CHRONICLE OF THE TARGARYENS

The Loss of Valyria

The great empire of Valyria was the most advanced civilization of its time,
covering much of the
eastern continent,
Essos.
Forty families strong in magic (including the Targaryens) ruled, conquering the known world. For some reason that remains a mystery, they colonized the isle of Dragonstone, but did not begin to conquer Westeros.

When most powerful, the Valyrian Freehold built all the current

Free Cities
(except Braavos
). The Valyrians molded rock like clay to make ancient roads, as well as Dragonstone

now lives. With thousands of slaves, they excavated the
Fourteen Flames, a great ring of volcanoes, for precious metals. A
bout a hundred years before Aegon’s
Landing
, when the first Targaryen dragon

rider came to Westeros from across the sea, the land was suddenly destroyed.

Little is known of this event, referred to as the Doom

of Valyria. A great (and unspecified)
cataclysm that sounds much like a volcano fragmented the land into many islands. The area, called the Smoking Sea, is now described as “demon-haunted,” and it is said, “The Doom still rules in Valyria” (V:73).

Tyrion Lannister reads in his books that in a single day every hill for 500 miles split asunder to fill the air with ash and smoke and fire, blazes so hot and hungry that even flying dragons were engulfed and consumed. Great rents had opened in the earth, swallowing palaces, temples, entire towns. Lakes boiled or turned to acid, mountains burst, fiery fountains spewed molten rock a thousand feet into the air, red clouds rained down dragonglass and the black blood of demons, and to the north the ground splintered and collapsed and fell in on itself as an angry sea came rushing in. “The proudest city in all the world was gone in an instant, its fabled empire vanished in a day, the Lands of the Long Summer scorched and drowned and blighted”

On to Richmond by Ginny Dye
Nightstruck by Jenna Black
Cowboy Valentine by Mia Hopkins
Snapshot by Linda Barnes
The Disappearances by Malley, Gemma
WeresDigest by Desconhecido
Algoma by Dani Couture
Undercover Lovers [Urban Affairs 1] (Siren Publishing Ménage Amour ManLove) by Gale Stanley
Moxie and the Art of Rule Breaking by Erin Dionne
A History of Money and Banking in the United States: The Colonial Era to World War II by Murray N. Rothbard
Our partner