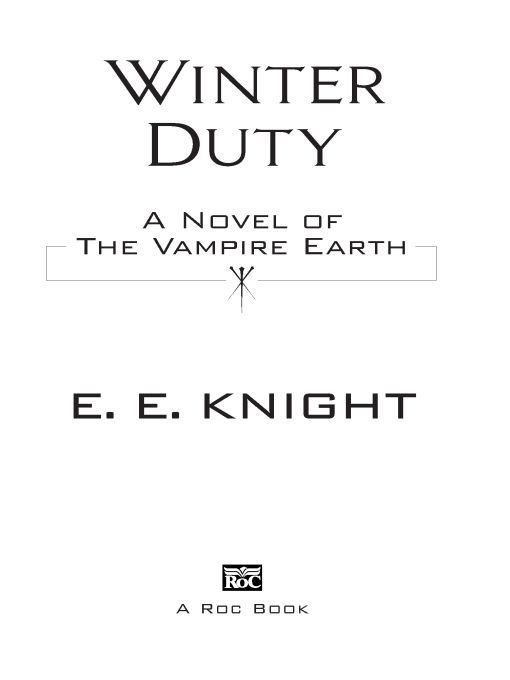 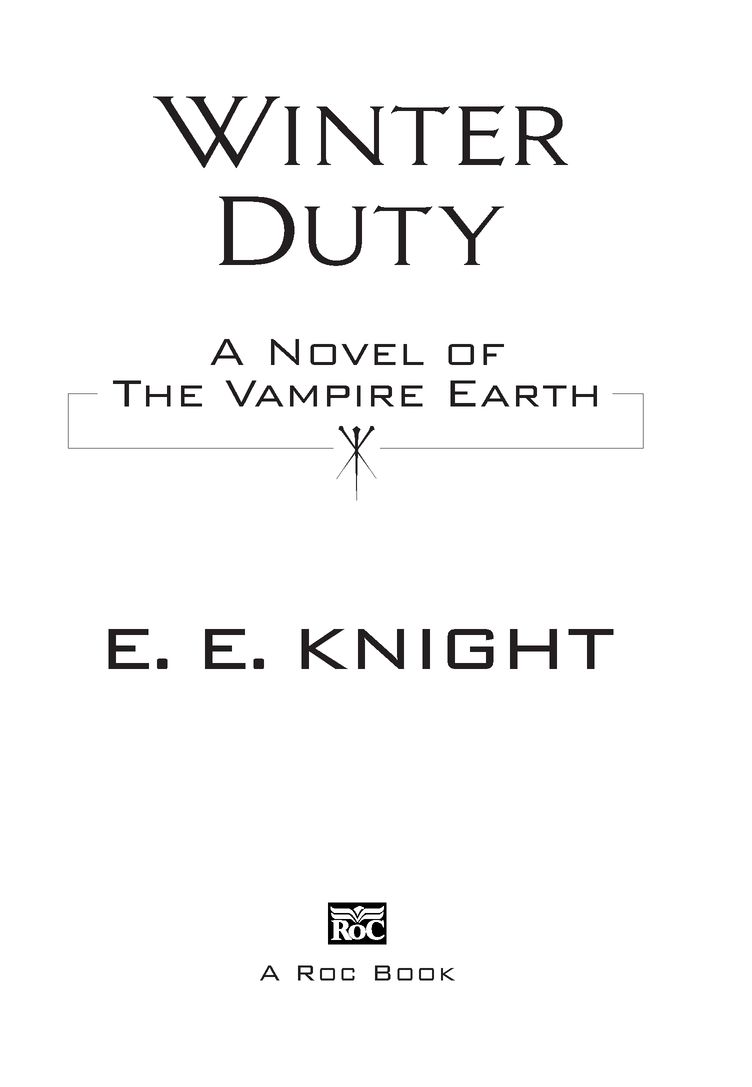 REGISTERED TRADEMARK—MARCA REGISTRADA
LIBRARY OF CONGRESS CATALOGING-IN-PUBLICATION DATA:
Knight, E. E.
Winter duty: a novel of the Vampire Earth/E. E. Knight.
p. cm.
eISBN : 978-1-101-06138-1
Without limiting the rights under copyright reserved above, no part of this publication may be reproduced, stored in or introduced into a retrieval system, or transmitted, in any form, or by any means (electronic, mechanical, photocopying, recording, or otherwise), without the prior written permission of both the copyright owner and the above publisher of this book.
PUBLISHER’S NOTE
This is a work of fiction. Names, characters, places, and incidents either are the product of the author’s imagination or are used fictitiously, and any resemblance to actual persons, living or dead, business establishments, events, or locales is entirely coincidental.
The publisher does not have any control over and does not assume any responsibility for author or third-party Web sites or their content.
The scanning, uploading, and distribution of this book via the Internet or via any other means without the permission of the publisher is illegal and punishable by law. Please purchase only authorized electronic editions, and do not participate in or encourage electronic piracy of copyrighted materials. Your support of the author’s rights is appreciated.

To John O’Neill,
who keeps the heroic dream alive
Dies iræ! dies illa
Solvet sæclum in favilla
Teste David cum Sibylla!
—REQUIEM MASS
USUALLY ATTRIBUTED TO THOMAS OF CELANO, C. 1200
CHAPTER ONE
The old Jackson Purchase, Kentucky, November of the fifty-fifth year of the Kurian Order: Summer and winter contest the season, with fall waiting on the sidelines as though waiting to determine a winner.
Gloriously warm, some might even say hot days give way to chill nights of thick dew and fogs. The trees cling to their leaves like bony old women chary of nakedness, and the undergrowth remains thick and green or brown.
A line cuts through the growth, trampled and torn into a furrow that circumnavigates only the biggest trees. A stranger to Kentucky of this era might conclude a bulldozer had gone on a rampage, but to natives the furrow is instantly recognizable as a legworm trail.
Capable of eating their way across country at a steady three miles an hour, or doubling that if the riders chain the jaws and scythes shut and prod them along with pokes to their sensitive undersides, the giant yellow caterpillarlike creatures provide a ride smoother than any wheeled conveyance. Especially considering the broken-up state of many of Kentucky’s roads, cracked when the New Madrid fault went in 2022 and exploited by new growth.
The trail ends at a camp.
The two worms huddle next to each other in the cold, contracted as tightly as their segmenting allows. One would almost say “unhappily,” were the odd, segmented creatures capable of anything as prosaic as happiness or its antonym. Their skin is never more reminiscent of old fiberglass attic insulation than this late in the year, when new winter growth turns the outer layer into tufts and tatters.
Each of the worms bears a pair of curious wooden yokes across its back, projecting from its sides like yardarms of a sailing ship. Each pair supports full hammocks, two to either side of the legworm. A few more walking wounded limp here and there in the camp, bringing food and cleaning those in the hammocks under the supervision of a blue-uniformed nurse. The nurses look exhausted, having spent the day walking up and down the back of the beast with the practiced air of a circus performer, plunging a hook into a fleshy yellow tuft to drop down and check on a patient, offer water, or adjust a towel hanging so as to keep the sun out of the wounded soldier’s eyes.
The rest of the camp not on guard cooks, bakes, or sleeps dead-deep and dirty. There’s always too much to do in a hospital train.
A thin strip of woodland and a slug-shaped marsh sit beyond the farthest picket, where a pair of figures lies on their bellies just below the crest of one of the low rolling hills of this quarter of Kentucky where it falls off toward the Mississippi River. Their prone bodies are pointed, like a pair of compass needles, at another camp, smaller in numbers but more spread out in size—a careless campsite, more interested in avoiding one another’s smells and sounds than organization or security.
The watchers are male and female, though it is hard to tell by their hair or apparel. If observed from anywhere but atop them, they might be mistaken for a couple of dropped bundles of laundry. The female’s long brown overcoat is so patched that the fabric takes the appearance of a camouflage pattern. A thin, freckled face and a fringe of knife-cut red hair can just be made out behind the bug eyes of a pair of mini binoculars. Her longer, leaner companion carries more weapons and gear. He’s clad in an odd fusion of weaponry, pebbly leather, and slate gray uniform that looks more like the overalls a utility worker might wear, with thick padded knees and elbows. He’s worn-looking from scarred face to pocked and scratched bootheels. In contrast, clean and silky black hair covers the back of his head in a luxurious fall down to his shoulders.
Her binoculars sweep from campfire to sentry, from thick-tired four-wheel vehicle to tent to trailer. She’s counting, assessing, calculating risk and threat potential.
His unassisted eyes remained locked on a huddled group of figures in the center of camp. They’re neither tied nor restrained; instead they sit behind a staked-out square of construction pegs and red twine, eating hockey puck-sized biscuits the color of gravel from a freshly opened box. Mothers have mashed and soaked them in water for their children; the others either break up the rations with fingers or bite into them, depending on the condition of their teeth. One of the stronger captives, a hulk with a pair of gloves over his ears serving as elephantine earmuffs, wrestles a heel of bread from a weaker, old man with a neat goatee. Their guards do nothing to intervene. It’s gone all too soon, save for a few biscuits given up by the older specimens behind the string to the mothers and children.
It’s hard to tell exactly what the watching man may be thinking; he keeps his face a careful mask. But a careful observer might note that he’s blinking more than his companion as he watches the huddled captives try to feed their children.

David Valentine suspected his eyes were glittering red in the dark, like eyes reflecting a camera’s flash in old pictures of wedding guests. The night vision he’d had ever since becoming a Cat came with some odd side effects. It was a gift of humanity’s Lifeweaver allies in their war against the Kurians, but a double-edged one. While his pupils could open as wide as if under a pharmacological effect to let more light in to the sensitive, and multiplied, rod-shaped cells beneath, that also left him vulnerable to headaches when exposed to sudden glare and color vision that was a little off from what most people experienced.
Though the tears interfered with his vision, Lifeweaver-improved or not.
His light-thirsty eyes watched the strangers’ nighted camp. The sky might have been a pane of glass between Earth and the stars, and the moon would be up in a couple of hours, when it would glow like a searchlight.
They’d been lucky, oh, so lucky. Both parties had approached and camped without cutting each other’s trails, and only his train had bothered with a proper reconnaissance.
His wounded and their caregivers were settling down just on the other side of a low hill and a stretch of soggy woodland between.
A meeting engagement, then. Whoever found out the most about the other fastest would have the advantage. No sign of scouts discovering his wounded, or he suspected he’d see more action in the camp.
“Who do you think they are?” he asked the woman next to him. Alessa Duvalier had trained him in the business of operating in the Kurian Zone.
“Poachers. Nomansland trash.”

The Bleeding Sun by Abhishek Roy
Did Muhammad Exist?: An Inquiry into Islam's Obscure Origins by Spencer, Robert
The Morning and the Evening by Joan Williams
Takeover by Viguerie, Richard A.
The Monkey Wrench Gang by Edward Abbey
Dinosaur Blackout by Judith Silverthorne
A Hasty Betrothal by Jessica Nelson
The Wild Marsh by Rick Bass
Gates of Rapture (The Guardians of Ascension) by Caris Roane
Wait Till Helen Comes by Mary Downing Hahn
Our partner