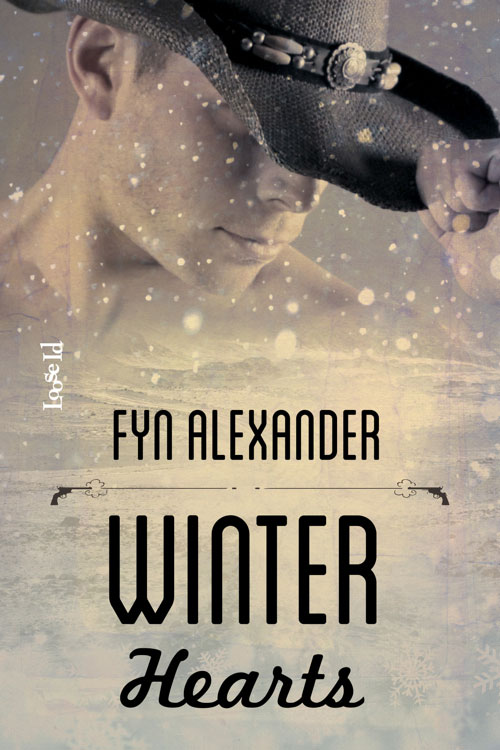 It wasn’t the only thing that was lonely. Winter had set in hard, and now, at the beginning of January, Luke was sick of it, unsure he could stand another three or four months of winter blizzards. But what else was there to do? Some men got so lonesome that they picked up their guns and blew their brains out. Others went crazy and wandered off onto the prairie, where they froze to death.

Luke Chandler was stronger than that. Just last summer he’d survived a beating in New York City that would have killed a weaker man.

Five burly longshoremen had dragged him outside the White Horse Tavern and into a dark, stinking alley on Hudson Street, all because he’d smiled at another man. When he’d walked into the crowded bar, the man, rough but handsome, had nodded at him. Bored and already slightly drunk, he had misread the signs. The smile he threw back, hoping for a quick tussle outside the back door, was flirtatious. It was enough to get him a couple of black eyes, three or four broken ribs, and so many bruises he couldn’t shave for weeks because his face was so swollen.

After his wounds had begun to heal a little, he’d headed west to Dakota Territory, stopping at the General Land Office in Brookins to claim a quarter section of good cropland. The short, skinny man who had written up the land patent for him looked as if he had never worked a plow in his life.
“Are you the head of a family?”
he’d asked several times.

“No, but I’m thirty years old. Plenty old enough to acquire land for the price of the filing fee,”
Luke had answered, growing increasingly irritated.

The question,
When are you getting married?
had become something he dreaded, having been hounded by it from about the age of twenty.

“Looks like you’ve been in a fight too,”
the man had said over the top of his wire-rimmed spectacles.
“I hope you can keep out of trouble. The government wants nice little law-abiding towns set up on prairie land. No outlaw types are welcome.”

“I just want land to farm. I want a quiet life,”
he’d said. All he wanted was to be left in peace.

“You’ll find a wife when you get there,”
the man assured him.
“She’ll keep you out of trouble.”

He’d arrived at the little town of De Smet at the end of summer, too late to plant crops on his hundred and sixty acres, but there’d been time to build a claim shanty and a small barn for his horse and the cow he’d bought on the way. All by himself he’d dug a well so he’d have fresh water for when he could put a pump indoors. When winter proved colder than anyone had anticipated, the first storm blowing in in mid-October and lasting a week, he’d ridden into town and rented a one-room house with a small stable for his horse and wagon and the cow. There he’d have access to the stores to buy food and supplies.

The house was built of logs, which was warmer than boards, and it had a thick board floor. But the biggest bonus was a sink with an indoor water pump. Luke had furnished the place with his own bed by the far wall, which was wide enough for two. He’d been optimistic when he’d made that bed. Now he doubted anyone but he would ever sleep in it. He had emptied out the straw tick and refilled it with the fresh hay he had cut from the Big Slough. He had two straight-backed chairs and a small square table for his meals. A couple of shelves were nailed to the walls to store food and pots and pans. Being small, the house was easy to heat and sweep. But, lonely, he’d grown lazy, and the place needed a good cleaning. He knew his first winter would be hard, but according to Mr. Fuller, who ran the general store, there’d never been one as hard as this.

Looking over at the unmade bed, the thick patchwork quilt his grandmother had made for his wedding day falling off onto the dusty floor, he felt ashamed. There had been no wedding day, and Grandma had died three winters past. Luke picked up the quilt, shook off the dust and crumbs to the floor, and threw it onto the bed without actually making it. His guilt at disappointing Grandma was appeased, but only slightly, by straightening her quilt.

Shivering, he threw more coal into the cookstove, stoked it up, and closed the hatch. It was difficult to stay warm when you were hungry. The coffee in the pot had been keeping hot since morning. Luke poured the last strong dregs into a tin cup and tossed it back. It tasted foul but warmed him down into his empty belly.

The last of the salt pork he’d brought with him was gone. Glancing over at the sack of cornmeal resting against the wall, he saw there was barely a quarter of a sack left. Plain corn mush without maple syrup or gravy to give it some flavor had soured on him days ago, and he had no desire to make more just then. Thank God a train was on its way with supplies for the town.

Unexpectedly, silence settled around the little house. The howling had stopped, which meant the storm that had imprisoned the townspeople in their homes for the past five days was over. As relieved as a child who had found an orange in his stocking on Christmas morning, Luke ran to the small window, pulled back the burlap sack he’d nailed up in lieu of curtains, and looked out. The men of the town were already hurrying across the street to catch up on the gossip. The moment a storm ended, the town came to life.

From the hook by the door, Luke took his hat. He pulled on his heavy buffalo coat. Snowdrifts were high, but the sky was blue and the sun shone so brightly that he squinted when he stepped into the street. All winter the prairie had alternated between fierce, blinding storms and bright blue skies. Children wrapped against the cold shouted and laughed, throwing snowballs and pulling one another on sleds. A young woman stood at an open door beating a small rug. When Luke caught her gaze, she smiled shyly and dipped her head.

He stomped his way through the snow and into the warmth of Loftus’s Grocery, Dry Goods, and Merchandise. Women crowded around the counter buying the few items of food left on the shelves and bundles of firewood for the stove. Wood was scarce on the prairie. Coal brought in by the trains was used in most stoves, but Fuller’s Hardware had sold out of coal last week. Luke was lucky he’d thought to buy a good supply while the store still had it.

“How you doing, Chandler? Keeping the little house warm?” It was Ernest Turner, the town pharmacist and the owner of Luke’s house.

“I’m managing.” Luke said as little as possible to the other men. He had nothing in common with them, and he didn’t want to get friendly.

Tipping his hat to the man, he went to see what was left on the shelves. A couple of tins of oysters and a small sack of dried beans were all he found. There was tea, which he rarely drank. He took a jar of molasses to flavor the beans and was heading to the counter to pay when a pungent, vinegary smell wafted up his nostrils. A barrel half-full of pickled cucumbers stood there. He hated pickles but feared he might need them in a pinch. “I’ll take some pickles too.” He put his items on the counter.

Loftus took a long fork to fish the pickles out of the barrel. “How many?”

“A dozen,” he said reluctantly, watching Loftus stuff the ugly green things into a jar.

“You got a wife?” Loftus screwed a lid onto the jar before scribbling the prices of the items into a ledger and adding them up in his head. “A dollar fifty.”

Luke could also add in his head, and he read upside down. “That’s a dollar thirty-five.” He pulled some coins out of his pocket and counted out the money.

“So it is.” Loftus smiled, showing tobacco-stained teeth. “You got a wife?” he repeated.

“Nope.” Luke tossed the coins onto the scarred counter. It was a small town with no more than a hundred and fifty inhabitants. Everyone knew he was unmarried.

“Well, there’re lots of pretty girls in town. Come spring you’ll be seeing them all at church, and you can take your pick, a good-looking man like you.” The man spat a wad of chewing tobacco into a spittoon behind the counter and tore another piece off the plug with his teeth.

Stuffing the oysters, molasses, and pickles into his coat pockets, Luke met his gaze. “Can’t wait.” He took the sack of beans and went outside again, breathing in the cold, fresh air. His house smelled stale. He needed to open the door for a while and sweep the damned floor, but first he’d stop by Fuller’s Hardware to see if there was news on the trains.

Fuller’s was busier than Loftus’s because that was where the telegraph messages came in. Two men had begun a game of checkers on an upside-down crate over by the pot belly stove, while others stood around watching them. Looking around the store at the men, mostly young or in their middle years, together with a couple of graybeards, he knew he didn’t belong among them, that he would never truly be one of them. He could think of nothing to say to them beyond discussing the severity of the storms, and he’d done that between the last two blizzards.

“Any news on the train?” he asked Fuller.

Sanctuary by Christopher Golden
The Toplofty Lord Thorpe by Kasey Michaels
Her Last Call To Louis MacNeice by Bruen, Ken
The Wrecking Crew by Donald Hamilton
Life After The Undead (Book 2): Death to the Undead by Sinclair, Pembroke
Treachery in Death by J. D. Robb
The Alpha's Cat by Carrie Kelly
State of Chaos (Collapse Series) by Lane, Summer
Murder at the Monks' Table by Carol Anne O'Marie
Forever England by Mike Read
Our partner