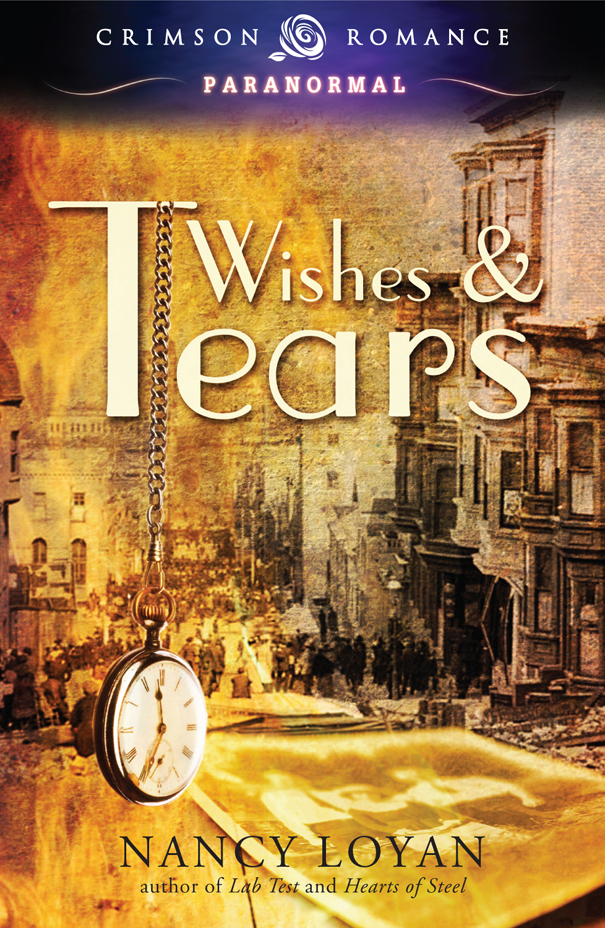 This edition published by Crimson Romance

Dedicated to my fellow writers

The struggle is worth it

I have always been a history buff. Touring historic places, reading about how people lived and amassing books on different episodes of history, historic lifestyles, historic trivia and the like are a passion. When I found a volume written after the Great San Francisco earthquake and fire, I was hooked on the event. It led me to purchase several other historic accounts of this tragic moment in United States history.

Then, I had a dream. It was a dream about a handsome doctor practicing in San Francisco during that historic period. The “what if?” that writers think of popped into my mind and wouldn’t leave. It led me to research medicine of the period and lifestyles. My imagination took over and this novel was born.

This novel would have never been published were it not for the supportive writer’s critique group I had been a member of for a number of years. Though we split after our busy lives as published authors took hold, I am forever grateful for their influence and input. I want to thank members Mary Ann Chulick, Christine Nolfi, Christy Carlson, Dianne Kodger Harper and the late Ruth Nelson for helping me become the published writer I am today. I would be remiss in not acknowledging my past critique partners, Al Chaput and the late great June Lund Shiplet as well. June, by the way, created the romance time travel genre with her novel,
Journey to Yesterday
.

A special thank you to Crimson Romance and especially my fabulous editor, Jennifer Lawler, for having “faith” in me!

“I don’t love you anymore. I want a divorce,” Brad said, his voice devoid of emotion and remorse.

Faith sat in stunned silence at the turn the morning conversation had taken. First, he said that he didn’t love her. Now, the words a woman never wants to hear. What went wrong? Love and commitment had suddenly been replaced with guilt and betrayal.

“There’s something you should know. You know Pamela at the firm?” Brad asked, looking up from his mug of strong black coffee. His eyes, once his most vibrant feature, were dark and vacant when they met hers.

“Yes.” Faith felt a lump forming in her throat, fearful of what he might say next. Pamela was the new perky blonde associate at his firm, bright and curvaceous. Just out of Harvard Law School, hadn’t he interviewed her for the job?

“She’s expecting my baby. We’re getting married,” he said bluntly.

Remembering his words made her tremble. He had the audacity to have a baby with someone else!

For fifteen years, Faith had sacrificed and struggled to help him build a comfortable life. Now that he was partner in the law firm, now that they owned a stately home and could afford the freedom and luxuries money could buy, he wanted to tear it all apart.

Ever since her freshman year in college, Faith had done everything for Brad from typing his papers to doing his laundry. When they married after graduation, she had given up her own dreams of law school for him. Instead, she taught school to support his ambition. She agreed to forsake her family and friends and move across the country to fulfill Brad’s desire to live and work in San Francisco. She even agreed to sacrifice motherhood when he made it clear he didn’t want to be burdened with children.

When Faith shared the news at dinner tonight, her best friend Clarice had been floored. Everyone in their circle thought that Brad and Faith had a marriage to be admired and envied. Brad was always sending her roses at work with sexy little notes. They were always holding hands and cuddling like newlyweds. The way they gazed into each other’s eyes was so electric they seemed lost in their own romantic world even when in a crowd.

“How could a love like yours, one that seemed so perfect, die without anyone knowing?” Clarice asked.

Faith had spilled out her soul so much she had hardly eaten, and the glass of Chardonnay had done little to calm her nerves. Clarice had listened, tried to be encouraging, pledged her support, and had hugged her in a sympathetic embrace before leaving the restaurant.

Faith drew a deep breath. Clarice was now en route to her home, to a husband and children. Faith wondered how she, herself, could face an empty house and an empty life.

“Brad, you bastard!” she screamed, the words echoing off the wood veneer dash and leather upholstery. “How can I start over after wasting the best years of my life with you?”

She gazed out the windshield. From the hilltop parking space, she could see the lights of the city twinkling below. The expanse of the Golden Gate Bridge was silhouetted against a moonlit sky as the fog began to blanket the calm bay. She sniffled, dabbing the tears from her cheeks with trembling fingers.

After wiping the last stray tear, she turned the key in the ignition. With her other hand, she maneuvered the stick shift while depressing the clutch. As she moved her foot to the gas pedal, the car lurched forward rather than the intended reverse. Instead of backing out of the parking space, her car sped forward. Realizing her mistake, she shifted into reverse but it was too late.

Faith gasped in horror as she realized her loss of control. As if in slow motion, the red Jaguar was airborne, gliding on air currents as it sailed into the darkness over the hilltop where it had been parked. In numb disbelief, she clung to the steering wheel as the Jaguar began its dive. She felt the blood draining from her fingers, knuckles, and face. She could see downtown San Francisco aglow with life and the streamers of headlights crowding the Golden Gate Bridge. For a moment she felt suspended in a peaceful, ethereal sky.

“Oh my God, I’m gonna die! I’m gonna die!” she repeated over and over, the words strangled in her throat as the automobile descended into darkness.

She closed her eyes. Visions of her life flashed before her like a tape, fast-forwarding through scenes. The good times seemed to be highlighted as if to bring peace and calm in reflection. Is this what it feels like to die?

The impact of steel hitting water jolted her back against her seat with such force she was left breathless. She wheezed for air as the car floated on the misty surface of the glossy bay. She tried to regain her composure. After unbuckling her seatbelt, she pressed the buttons to open the car windows but the wiring had already short-circuited. She pulled at the door handles but they wouldn’t budge. As the sleek car began its descent into the murky depths, she let out a shrill scream. Soon, the chilled wet began to seep into the car as the water began to rise outside, engulfing her. She urged herself to remain calm and to think if she didn’t want to drown in the sealed tomb of her car … if she didn’t want to die.

As the water enveloped the interior of her car, she crawled up toward the inside roof for air, remembering that it would be the last air pocket. She fumbled for the door handle. Hadn’t she read about doors opening if the water pressure was equalized both inside and out? Taking a last deep breath, she reached down under water and tugged at the door handle. To her relief, the door popped open. Groping her way, she squeezed out into the rush of water. She followed the instinct of her body’s desire to float upward and swim up through the darkness.

After what felt like an eternity, she broke the water’s surface. Her chest heaved as she gasped for breath. After drawing the crisp night air into her lungs she felt renewed. Faith treaded water and opened her eyes. Only the moonlight and a sky sprinkled with stars shone over her, the mist, and the stillness of the glassy water. The night was quiet, eerily quiet. She felt so completely alone. What a fitting ending to the darkest day of her life.

Faith awakened nestled in the warmth of a flannel nightgown and downy comfort of a bed in a room that felt oddly familiar. Her lips formed a thin smile as she thought that the episode with Brad and her prized car sinking into the bay was nothing more than a bad dream. As she opened her eyes, though, a shiver of foreboding penetrated her body.

Confused, she surveyed the room. The intricate, stained glass window in the dormer, the finely chiseled millwork of the ceiling moldings, and the buffed parquet floor were identical to those in her bedroom at home. The furnishings, though, were not her own. Instead of the brass and glass she had purchased with Brad, fine Victorian pieces decorated the room. She scooted up in a bed created of white enamel baked on iron, trimmed and ornamented in shiny brass. Along the perimeter of the room were a tall rosewood wardrobe, matching dresser, and chiffonier. A commode held a porcelain toilet set and crisp linen towels. The carved mantel framed a glowing hearth that helped to illuminate the room while a Tiffany lamp set on a bedside table assisted. She looked up at the gilt-framed mirror that hung above the mantel and across at a nearby wicker chair set. Tapestry draperies covered the long, narrow windows and a Persian rug accented the floor. She thought the room was an impressive reproduction of a past era but wondered where she was and how she had ended up here.

Before she could gather her thoughts, the door to the bedroom opened. A maid attired in a vintage uniform waddled into the room carrying a wicker bed tray set with a china tea service. She approached the bed where Faith lay and gently set the tray down upon it.

Faith glanced up from the maid to the tea service and back up at the maid.

“The tea with honey will be good for you, ma’am, to warm your body and chase away the fever and chills,” the maid said in a thick Irish brogue. She smiled a kindly but crooked smile and curtsied.

“If you need anything, just ring the bell on your nightstand and I’ll scurry up to help.”

“Who are you?” Faith asked.

The maid tilted her head meeting Faith’s confused gaze. “I’m Bridget, ma’am, and my orders are to take good care of you.”

“Your orders? I don’t understand.”

“Doctor Forrester, ma’am. He’s my employer, a fine man, and he asked me to watch over you. That’s what I’ve been doing since he brought you home the evening last.”

“He brought me to his home?” Faith eased herself up in an erect sitting position. The little exertion winded her and made the room spin. She put her hand to her forehead, closing her eyes.

“Let me help you. You’re not well.” Bridget leaned over the bed. She fluffed the goose-down pillows before rearranging them behind Faith to support her head and neck.

'Tis the Season by Judith Arnold
The Sensible Necktie and Other Stories of Sherlock Holmes by Peter K Andersson
No Chance in Hell by Jerrie Alexander
The PowerBook by Jeanette Winterson
Renegade Hearts (The Kinnison Legacy Book 3) by McIntyre, Amanda
The Language of Silence by Tiffany Truitt
Mack (King #4) by Mimi Jean Pamfiloff
Don't Forget to Dream by Kathryn Ling
Agrippa's Daughter by Fast, Howard
Death's Door by Kelly, Jim
Our partner