Read Witch Is When the Penny Dropped Online

Witch Is When the Penny Dropped 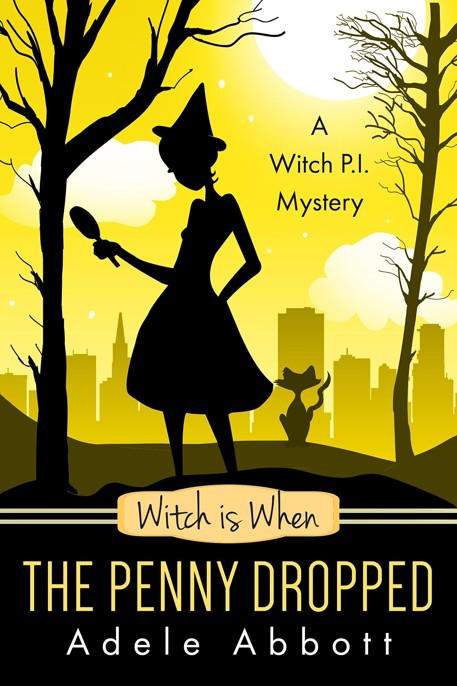 The right of Adele Abbott to be identified as the Author of the Work has been asserted by her in accordance with the Copyright, Designs and Patents Act 1988.

All rights reserved, worldwide. No part of this publication may be reproduced, stored in a retrieval system, or transmitted, in any form or by any means without the prior written permission of the copyright owner.

The characters and events in this book are fictitious. Any similarity to real persons, dead or alive, is purely coincidental and not intended by the author.

“Luther?” I’d been practising my ‘surprised’ voice for the last twenty minutes while I waited to ambush—I mean—bump into him. “I didn’t see you there.”

He was so close I could have reached out and touched those firm biceps.

“Sorry, I was miles away. Yeah, I’m just off to the office. What about you—what time do you start?”

“My first appointment isn’t until nine-thirty this morning. I’m glad I bumped into you though.”

Me too. We were obviously destined to be together.

“I’ve been thinking,” he said.

“About the monthly review of your books.”

“You remember you wanted to keep on with the monthly review of your books rather than the quarterly ones which I suggested?”

“Yes. I’d prefer you monthly—to go over the books, I mean.”

“Yes, well. It occurred to me that as we live in the same block of flats, it might make sense to do the review here.”

“Yes. I’ve got all of your records on computer now, so it would be just as easy to do it here as at your office. If that’s convenient to you of course?”

“Convenient? Oh, yes, it’s very convenient. I’m not doing anything else that night.”

“I didn’t actually mention a day.”

“I was thinking maybe Thursday.”

“Thursday? Let me think.” Did I have anything planned on Thursday? Who cared? If I did, I would cancel it for Luscious Luther. “Thursday’s fine. Your place or mine?”

“My place is still a bit of a mess after the move. I’ll come to you if that’s okay. How does eight o’clock sound?”

Like music to my ears. “Eight should be fine.”

I was so excited that I drove straight over to tell my sister, Kathy, my news.

She was wearing her pyjamas when she answered the door; she looked half asleep.

“What are you doing here?”

“Charming. I thought you’d be pleased to see me.”

“I am always ecstatic to see you, Jill. Now, what are you doing here?”

“Where are the kids?”

“Pete dropped them off at school on his way to work. I’d just gone back to bed.”

“It had better be important.”

She sighed. “Only if you put the kettle on.”

Kathy slumped on the sofa while I made us both a cup of tea. At least I’d be sure to get the right amount of sugar—one and two-thirds spoonfuls. I began to rifle through the cupboards.

“Where are the custard creams?”

“No, I mean
my
custard creams.”

“Oh, sorry. I didn’t realise you meant
your
custard creams. They’re in the tin too.”

She’d done it on purpose. “I thought we’d agreed that you’d keep some separate for me.”

“Yeah well, there was a slight problem with that plan.”

“I couldn’t be bothered.”

Even my sister’s selfishness couldn’t put a damper on my spirits. I had a date with Luscious Luther, and all was well with the world.

Kathy dunked a ginger nut into her tea.

“Do you have to do that?” I looked away.

“Lovely, soggy ginger nuts. Want a bite?” She waved the offending biscuit under my nose.

“You’re gross. I hope you don’t let the kids see you do that.”

“We have biscuit dunking lessons every Friday. Anyway, what’s so important that you dragged me out of my lovely, warm bed?”

What do you mean delusional? He’d asked me out hadn’t he? He was coming over to my place, wasn’t he? What was that if it wasn’t a date?

“Are you sure you were awake at the time? It could have been a dream.”

“I’m sure. I just happened to bump into him in the corridor—”

“He’s coming around to my place on Thursday.”

“Good for you. It’s about time you got back in the game. I guess Jack had his chance and blew it.”

“You’re not planning to cook for Luther, are you?”

“I thought I would.”

“Think again. That will be the last you see of him.”

“Baked beans on toast is not cooking.”

Much as I hated to admit it, Kathy was right. I daren’t risk scaring Luther off on our first ever date.

“You could come around and cook for us.”

She laughed. “Yes, because I don’t have anything better to do.”

“No, I think it could work. I wouldn’t tell him you’re my sister though.”

“I could tell him you’re my maid.”

Kathy spat out a mouthful of tea. “I am not pretending to be your maid, and I am not going to cook for you and your hot accountant.”

“I suppose I could order in catering.”

“What other choice do I have if my own sister won’t help me out? Anyway, how come you look so rough this morning?”

“Nice of you not to mention it.”

“Is Grandma running you into the ground?”

My grandmother had recently opened a yarn shop, Ever A Wool Moment, in Washbridge, and she’d given Kathy a job there.

“No, your grandmother is a little darling.”

Grandma may be many things, but a ‘little darling’ she most certainly was not.

“If it’s not Grandma over-working you, what is it? Are you sickening for something?”

“I did tell you, but as usual you weren’t listening. Too busy daydreaming over Luther no doubt.”

“What’s wrong with them?”

Kathy stifled a yawn and shrugged.

“There’s all kinds of strange noises coming from round there.”

“No, not music. Just weird noises. Pete said it sounded like howling.”

“Have you met them yet?”

“It’s not a ‘them’; it’s a ‘he’. At least as far as we can make out. That’s weird too. We didn’t actually see him move in—no removals van or anything.”

“It might have happened while you were out at work.”

“But you haven’t actually seen him?”

“No. Pete went around there—”

“To complain about the noise?”

“No, just to say ‘hi’. It was while I was putting the kids to bed. The noises hadn’t started then. But anyway, whoever lives there didn’t answer the door. Pete said he was sure there was someone in though.”

“Weird. I thought I was the one with all of the strange neighbours.”

“Except Luther, of course.” Kathy grinned.

The sound of his name brought a smile back to my face. “Except Luther.”

“Anyhow,” Kathy said through yet another yawn. “Not to be rude or anything, but isn’t it time you were going?”

Not to be rude? “I thought you’d want to hear my news. You’re always going on at me to find a guy.”

“Aren’t you in work today?”

It was too early to go into the office, so I stopped off at a new coffee shop which had only recently opened. The Coffee Triangle was around the corner from Ever A Wool Moment.

The decor was very unusual, and I couldn’t work out what the theme was supposed to be, but I noticed there were maracas on every table.

“Morning!” The young man behind the counter greeted me with a shake of his maracas.

“Beautiful morning.” Another shake of the maracas.

“What can I get for you?” He shook the maracas a little too close to my face for comfort.

“Can I get a caramel latte, please? Regular.”

“One caramel latte coming up.”

“I like the Spanish theme,” I said when he eventually got around to making the drink.

“It’s actually not a Spanish theme.”

“Oh, right. I just thought—with the maracas and all.”

He reached under the counter, produced a triangle, and gave it a pleasing little strike. “The theme is percussion.” He looked around, as though checking the coast was clear. “It’s the boss’s idea. Between you and me, I think it’s a bit over the top. He’s very into percussion. Today is maracas day. Yesterday was the tambourine, and tomorrow it’s the xylophone.”

“It can get a bit much when the place is full. Fridays are the worst.”

“Gongs. I tell you my head was pounding by the time I’d finished my shift.”

I grabbed a copy of the Bugle, Washbridge’s inglorious tabloid, and sat at a window seat. After a quick shake of the maracas—I couldn’t resist—I checked the front page headline: It’s Murder!

The article was another thinly veiled attack on the Washbridge police. Apparently, there had been two murders the previous day—it appeared they were unrelated. According to the Bugle, this was indicative of the general lawlessness which plagued the city. With two murders on his patch, Detective Jack Maxwell was going to be a busy man. He and I had a rather unusual relationship. When he’d first moved to the area, he’d given me a particularly hard time. Our relationship had subsequently improved, and the last time I’d seen him he’d suggested he might cook a meal for me. But that was a while ago, and I hadn’t heard from him for some time. We certainly weren’t an item—despite the best efforts of Kathy to push us together. And besides, I now had Luscious Luther, so it looked as though Jack had missed his opportunity. You snooze, you lose.

I finished my coffee, had a last shake of the maracas, and then left, but not before making a mental note to avoid Wednesdays (drums), Fridays (gong) and Sundays (triangle). What? I know triangles aren’t loud, but I’ve had an irrational fear of them ever since that incident at primary school. I don’t like to talk about it.

As I approached Ever A Wool Moment, I noticed the shop next door was boarded up. For as long as I could remember, it had been a fishing tackle shop: Rod’s Rods. As far as I was aware, it was the only shop in the city which catered to Washbridge’s anglers. Maybe Rod had retired, or maybe he’d relocated. So why was I getting bad vibes?

Grandma had invested heavily in LED signage for the shop since last I’d been past. In the centre of the window was a scrolling sign which conveyed the message: Never run out of wool again - Everlasting Wool is here! To the left was a smaller, but no less garish sign which scrolled the message: Throw away all those needles - One-sized needles are here! The third sign promoted the recently opened web site: EverAWoolMoment.com which offered one hour delivery anywhere in the country.

I could feel a migraine coming on just watching them all. I was about to turn away when I noticed the main sign change its message. It now read:
Shouldn’t you be practising your spells instead of gawking at this window?

Grandma! Did that woman miss anything?

The Symbolon by Colvin, Delia
Groomless - Part 1 by Sierra Rose
Raber Wolf Pack Book Two by Ryan Michele
Soulshine by J W Rocque
Talent Chronicles 2 - Impulse Control by Bischoff, Susan
Until Then (Cornerstone Book 2) by Noorman, Krista
All That Matters by Paulette Jones
Legends of Dimmingwood 02:Betrayal of Thieves by C. Greenwood
Quipu by Damien Broderick
A Valentine For Christmas - A Regency Novella by Harper, Kate
Our partner