Read With My Little Eye Online

With My Little Eye 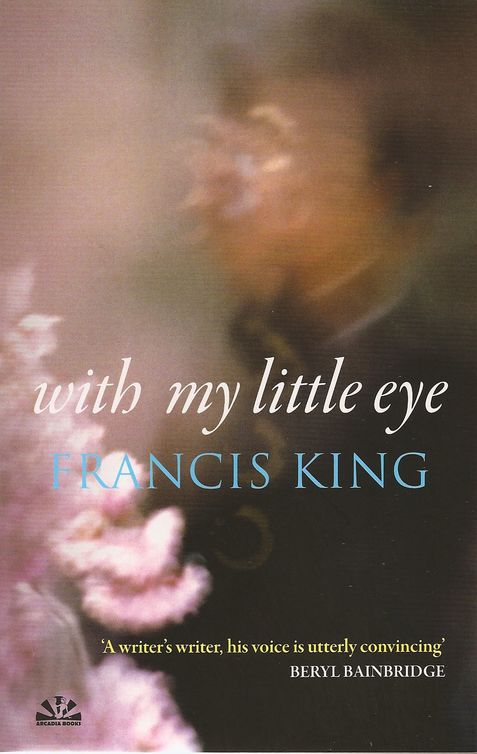 WITH MY LITTLE EYE

Champion of books and kindest of friends

The
living
are
the
dead
on
temporary
reprieve

I lie on my side, right hand under cheek, and in the twilight I peer through the tunnel choked with trails of dead or dying vegetation. I shut one eye and attempt to focus the other. Then I reverse that process, shutting the other eye. I hear the
whimpering
on the other side of the curtain on my left but I pay no attention to it or to the accelerating patter of heels on the linoleum and the nurse’s impatient ‘Well, what is it?’
Sometimes
instead of that whimpering I hear only a reiterated ‘Mum, Mum,
Mum
!’ occasionally interrupted by ‘Mum, where are you?
Where
are
you
?’

The tunnel has become a telescope. I peer through it. Spotted and smeared, it needs drastic cleaning. I see her, motionless, unwinking in her stare, her eyes blue beads of glass. She is huge, as though transformed like Alice in Wonderland by some magic potion. She rises from her haunches and, eyes still fixed on me, she pads down the telescope – or is it now once again a tunnel? – towards me. I wait for her with a sudden upsurge of relief. She has come to me, my American Rag Doll, risen from the mound of earth at the far end of the narrow, neglected garden. She has come back from the dead. She approaches my bed, halts, squats. She tilts her head up at me and I raise my head. We stare at each other. Then suddenly she bounds. She is there beside me, no longer the size of a tiger but touchingly small, as once I knew her.

I feel no surprise. I put out a hand and stroke. Her coat is soft and warm, not matted and damp as during those last days when she lay stretched out on her side, an emaciated
near-corpse
, on the bed. Laura did not want her there –
no, no, not on the bed, not on the bed
! Not merely my hand but my whole body begins to vibrate as she purrs. I stroke again. The purr becomes the core of my being, like some engine driving a ship through a calm ocean while its passengers lie sleeping.

Then suddenly it ceases. I half sit up and extend my hand, searching for her. I peer through the tunnel-telescope, straining to see past the trails of dead and dying vegetation to the far-off light at the end of it.

I ask myself: Why am I here? Then I ask myself: What
happened
? I remember a man raising an arm and a television screen obstinately flickering before flashing into life. That is all. When? Where? How?

‘Well, how are we this morning?’

Dr Szymanovski’s question is perfunctory. He is squat, with disproportionately large, peasant hands, and a face already creased and grey with weariness. When he first told me his name, I asked him if he was related to the Polish composer. He shook his head, pulling a small face, his jaws moving from side to side, tongue exploring, as though he had unexpectedly found a splinter of bone in a mouthful of stew. ‘Everyone asks me that.’ This morning a spindly young man with a prominent chin and kind eyes accompanies him.

‘Much as I was yesterday. Except that something odd has happened.’

‘Odd?’ He peers down at my file. This is merely a routine. He isn’t really interested.

‘I’ve been having what I can only call hallucinations. Our cat. Our dead cat. I keep seeing her.’

He jerks his overlarge head up from the file and his small, wary eyes scrutinise me. ‘Bonnet.’

‘Bonny?’ I am bewildered.

He turns to the young man. ‘Explain. Tell him about Bonnet’s Syndrome.’

I know already – as Dr Szymanovski knows, I am sure – that the intern has no idea what Bonnet’s Syndrome is.

The intern gives an embarrassed little cough and clears his throat. ‘Sorry. I haven’t the faintest.’ The accent is Scottish.

Dr Szymanovski is pleased with that ignorance. He smiles. As his lips part I note for the first time the small tuft of gingery hair under his lower lip. Did he deliberately leave it unshaved this morning or did he merely overlook it? ‘I didn’t think you would. Way back in the eighteenth century, there was a Swiss physician called Bonnet. His father – a tough old boy, as sane as could be, not in the least imaginative – had a stroke, like you, and then began to have hallucinations. Like you. Bonnet investigated the phenomenon.’ He turns away, hesitates and then turns back reluctantly. ‘So you see your dead cat? Nothing else?’

‘Anything frightening about that?’

I shake my head. ‘No. In fact – it’s somehow comforting.’

‘Well, you’re lucky. Not long ago I had a patient – a
household
name but of course I can’t reveal it. Well, he started to see knives – sometimes dripping blood – and even people
brandishing
them. That went on for several weeks. Your cat may go on visiting you for several weeks. Nothing to worry about. It’ll pass.’

‘And my sight. This tunnel vision. Will that ever return to normal?’

He shrugs. He has enjoyed talking about Bonnet’s syndrome, I am sure of that, but now he is embarrassed. In any case he must move on to the bed of the emaciated, whimpering old man next to me and to innumerable other beds. I have already had far more than my ration of his invaluable time. ‘Who knows? I don’t.’ He shrugs his pugilist’s shoulders. ‘We can only hope for the best.’

I peer through the tunnel at the two receding figures, the squat consultant and the lanky intern. Then, as they grow tinier and tinier, I see beyond them, squatting motionless with unblinking, blue glass eyes, the cat, my beautiful American Rag Doll, far larger than they are.

Indifferent, they walk through her and away, rubbing her out of existence.

She – my long-suffering, long-suffered Laura – stoops over my
bed and holds out a bottle. ‘Look what I’ve found for you.’ It is many years since I’ve seen such a bottle, chunky and square. I don’t have to peer at the label with my little eye. With
extraordinary
clarity I remember it.
POUR UN HOMME
. Then in smaller lettering, no capitals,
eau
de
toilette
.
Then below that
CARON
, and below that again
Paris
. She twists off the
hexagonal
black top and holds the bottle out towards me. ‘I remember how much you loved your Caron all through that hideous Japanese summer. Frankly I came to hate it.’

I breathe in the dizzying, now slightly nauseating scent, my eyes shut. Mmm! Then I gasp, open my eyes wide and smile at her. It is years since I used that scent. But during that time in Japan way back in the sixties when everything – even the
cushions
on the two facing sofas, the pillows on our bed, the towels on the rail – seemed to be damp and stinking of sweat, I was constantly splashing that liquid under my arms, over my palms or on to a handkerchief to press against my forehead and cheeks. Even after a shower or a shave I would use it. When, with increasing rarity, I made love to her, I would rub it all over my body in preparation. The Caron was my drug. It was also my aphrodisiac. Under its brief influence I ceased to be aware of the vast simmering cauldron in which we were trapped and that vinegary stench of sweat and putrescence that seemed always, inside and outside the house, to envelop us. ‘You stink like a brothel!’ she would say, half in derision, half in disgust. Or, ‘Anyone would think you were a nancy boy, the way you douse yourself in that stuff.’ Those were the days when even young people like her with defiantly progressive views talked of nancy boys.

She screwed back the top and placed it on my bedside table. ‘I hope people won’t mistake you for an old queen.’ Once it was nancy boy, now old queen.

‘It was kind of you to bring it.’ I put out a hand and take hers. I feel her wedding ring and turn it one way, then the other. Worn but indestructible. Like our marriage, I think
sentimentally
, not with entire truth. ‘A lovely and unexpected present.’

‘So how are things?’ She sits down on the chair beside my bedside table and stoops to take a package out of the capacious bag at her feet. ‘I made you some smoked salmon sandwiches.
And I’ve brought you two cakes from Bonne Bouche. Has there been any improvement in the food?’

‘None. But I don’t really mind. I’ve got no appetite.’

‘Are you sure you don’t want to move?’

‘But it’s so dreadful here. No privacy. Noise. Ghastly food.’

‘All that doesn’t worry me.’ But in fact it does. What keeps me in this ward is a vestige of socialist principles that, like my young self, were once headstrong and vigorous and now, again like myself lying here, are acquiescent and feeble.

From the bag she draws out her knitting. It’s yet another pullover for me. She frowns down at it, holds it up and peers at it, then rests it on her knees. For days and days, all through that hot summer until her cruelly abrupt departure, she would either lie motionless in our air-conditioned bedroom or else sit out on the terrace under the tattered persimmon tree, the baby beside her, and knit relentlessly and indefatigably on and on and on. Then, suddenly, she in effect jumped to her feet,
dropped
the knitting, snatched the baby from his pram and
vanished
. ‘I just can’t stand this any more. He can’t stand it either.’ Those were what I remember as her last words, but there were many more, no less devastating, after them.

Even in that terrible heat she was beautiful. Even in her
seventies
she is beautiful now. Her hands at the knitting are those of the thirty-two-year-old woman, rich, impatient and
capricious
, that she was then. Her face, with its high cheekbones and broad forehead, legacies, along with the wealth, from her Ukrainian grandmother, is so free of wrinkles that one of her female American cousins, on a visit to us from New York, once asked me whether she had had plastic surgery.
No, no, of course not
! Indignantly I repudiated the idea.

I wonder whether I should tell her of the return of Smoky, our American Rag Doll, from the grave. Not now I decide. She is worried enough already. To be told that I am hallucinating would worry her even more.

As, with that slightly limping gait, the result of an accident on a tricycle in her childhood, she eventually walks away from me down the tunnel that leads her past the long, receding row of beds and then through the swing doors, I suddenly see the
grey-brown, yes
smoky
, shadow accompanying her, close to her left ankle, all but touching it.

Then both of them pass through the door.

At that moment I smell with an overpowering intensity the Caron that she has dabbed on my forehead and cheeks. In those long-lost days of summer in Kyoto, it always seemed to me that it was the potent essence of life. Now it has changed,
mysteriously
, into the no less potent essence of what I recognise as death.